On a daily basis, we communicate with one another, whether it is at home with our families, over the phone with friends, or at work, where we discuss tasks and projects with our coworkers or with our managers. But, what if the communication is not clear? Or the sender fails to convey a clear message to the recipient? There’s a good chance that the things or work that needs to be done will be different from what we had anticipated. There might be a possibility that the task is not completed because the person didn’t know what to do and how to do it. Especially in workplaces, managers need to have effective communication with their staff and employees.

Just like this Reddit post where this guy, a member of the staff shared his horrifying yet hilarious experience of working in a workplace where two owners (A and B) had a disagreement and Owner B asked the warehouse manager to throw everything from owner A’s office out of the window. The warehouse manager carried out the instructions without seeking further clarification. Owner B, on the other hand, was completely taken aback after witnessing the devastation that had occurred in the office the very next day.

Scroll down to check out what happened next!

The warehouse manager was asked to “Bin Everything” after a dispute between two owners. 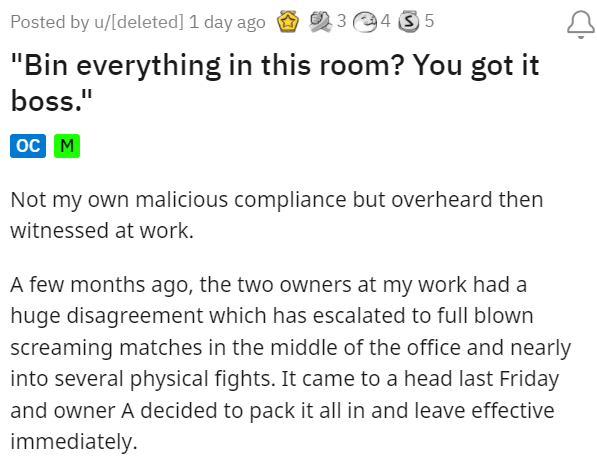 After a disagreement, owner A left immediately, and owner B asked the manager to clear his office. 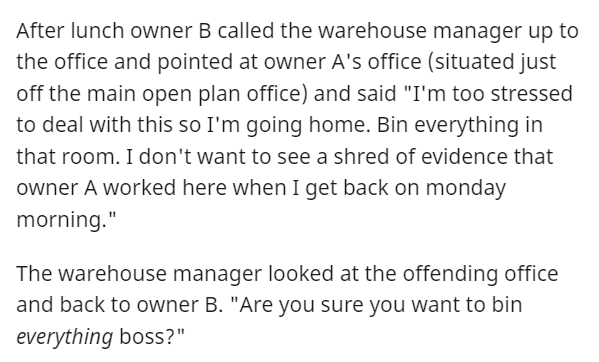 When owner B was asked about the clarifications to “Bin EVERYTHING,” he began throwing tantrums at the manager. 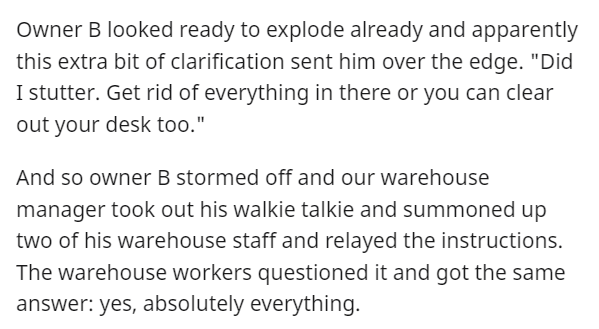 The warehouse manager followed the instructions and did something on purpose that was completely hilarious! 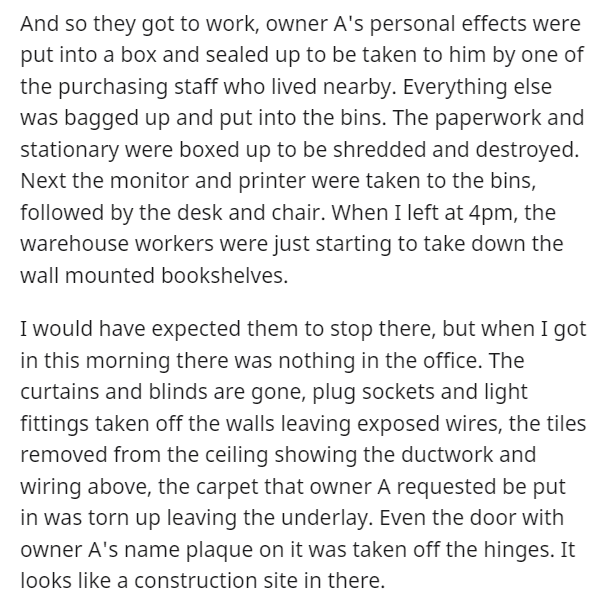 This act led the Owner-B in a completely awful situation.

Advertisement
However, there are many workplaces where the entire environment is disrupted. Why? Because the managers are having anger issues or emotional outbursts with the other managers or coworkers, or because the bosses are taking their frustrations out on the employees if the project is not completed perfectly, or for any other legitimate reason, these managers start screaming, making the workplace a hellish place to work.

Well, what this warehouse manager did was not wrong because he was instructed to discard everything in the room. When the manager asked about the clarifications, how the owner started behaving was the point where he made his own path to destruction.  If owner B simply clarifies what he meant by “Bin everything,” there is a chance that he could avoid this worst situation, as well as the loss of his assets and financial resources.

That’s why it’s said that “Communication is the key to success.” Otherwise, you may find yourself in the same situation as this owner B.

Check out what people on the internet have to say regarding this post: