When the landlords do not allow pets in the house, pet lovers keep secret pets.

Pets are so adorable; we never understand why landlords do not allow pets in some houses. Thomas Violence, one of the creators of the podcast “Boonta Vista“, who has more than 84k followers on Twitter shared on Twitter how learned about all the secret pets who are living in his 7-unit “no pets allowed” building. Thomas Violence was talking to a neighbor that he is afraid someone would snitch about Louis. Louis is Thomas’ secret dog that his landlord sometimes allows. In response to this, the neighbor told that almost everyone here has a secret cat except Thomas Violence. Thomas shared it on Twitter and a lot of people with secret pets showed up to talk in favor of secret pets.

1. People would always keep a secret pet if you would not allow it. Via: Reg Natarajan (not the actual photo)

2. OP lives in a “no pets allowed” building and he is the only one without a cat. 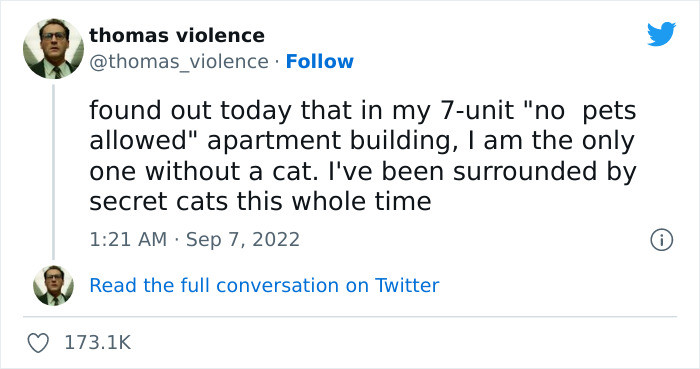 3. OP lives with the secret dog, Louis. OP thinks someone might snitch about Louis. 6. OP has a dog and looks like he is following the rules:

7. Whenever OP comes home, secret kitties say hello to him. 9. That’s how you can hide your secret cats from inspection:

10. This person lived in an apartment with “no animal” rule but they had a secret cat and a wild cat too. 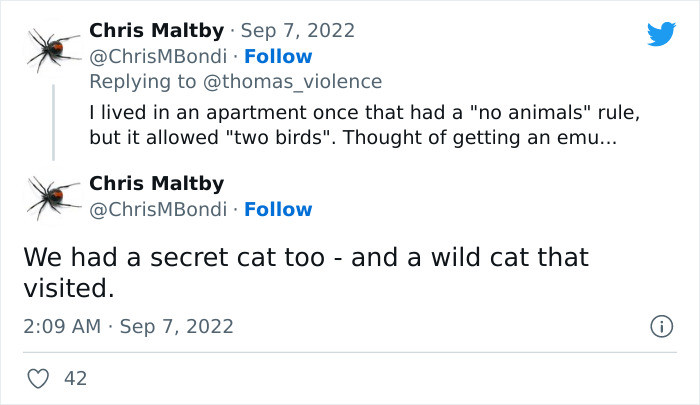 11. The landlords were chill about having two cats. How is it possible that a pet lover would live without a pet? Some secret cats are amazing and they know how to hide when there is inspection or maintenance. Also, if any of you ever see your neighbor’s secret cat, pretend like you didn’t see anything.

13. Every secret cat owner: No, you didn’t see any pets in my house.

14. Who says secret cats are not adorable? Via: Richard Gillin (not the actual photo)

15. If the landlord would not allow cats, bring a dog.

17. A secret guinea pig instead of a secret cat:

18. Bring your secret cat to work when there is maintenance work at home.

19. Someone’s dog greeted the landlord that said “no pets” by barking at him.

22. Every house should have a hidden cat door for secret cats.

25. The landlord fell in love at first sight with the secret cat. Have you ever kept a secret pet? How did you hide it from your landlord? Tell us in the comment section down below!