A wedding is an extraordinary day.

Anyone who has ever got married can tell you that it is a special day for the couple and it can be quite stressful. I mean it might be fantastical and fun to save pictures on Pinterest as to what you want at your wedding, but it rarely turns out as you expect. You have to be ready for a few mishaps. However, a wedding day doesn’t have to be precisely perfect according to your plans to still be memorable. After all, isn’t the fact that you are marrying your love enough?

Even though I say that we all know that there are a ton of stories on the Internet when it comes to bridezillas, groomzillas, and anyone else. These people basically let the stress of their wedding preparation get to them and that can make anyone a tiny bit neurotic. But that is no excuse and sometimes these people go way too far and come off as entitled. That is what happened in this particular story when the Bridezilla called out a teenager for wearing a sage green dress.

This story is going to be a doozy judging from the title of this post.

These specifications are a bit weird as what does modest even mean?

From the sound of it, she adhered to the rules set out by the bride.

But apparently, not everyone thought that.

As the bride’s mother asked her to come with her.

Once in the dressing room, the bride decided to berate her for her dress. 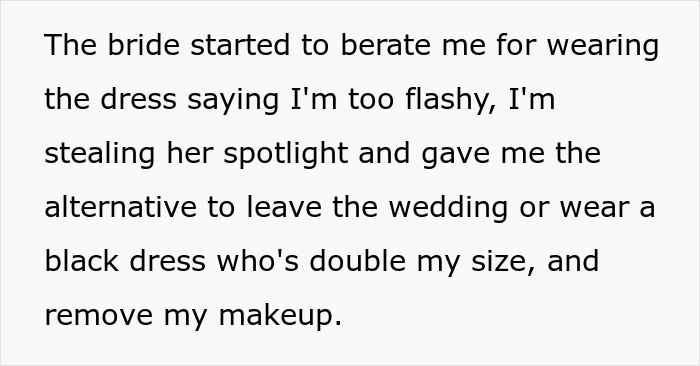 This is not the actual picture but we can all get a sense of the color at least.

The teen obviously refused to change into a new dress.

The story did not end there and it just became a bigger issue.

Even her parents got involved and it was a mess.

So it ended with a fight on the wedding day.

She also goes on to explain as how everyone was wearing similar clothing.

The bride became even pettier and messaged the teen afterward.

This is not how an adult should act at all. 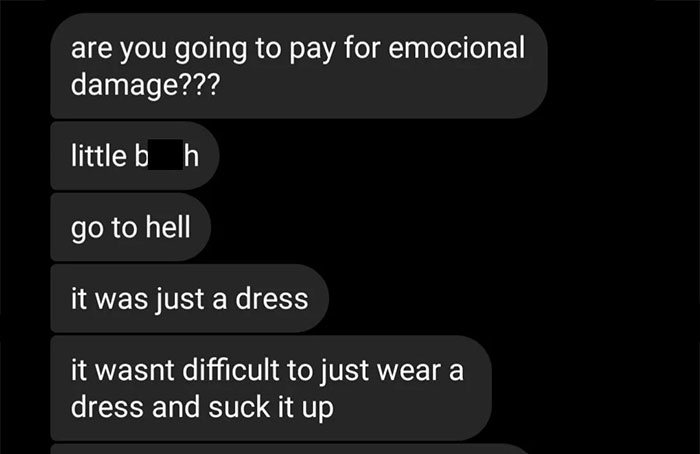 So the teen decided to ask the Internet for advice.

This is honestly just weird. I can understand feeling insecure on your wedding day but this bride took it too far. Not only that but the person in question was a teenager. She even went as far as to threaten the teen afterward which is especially disgusting as in her own words, it is just a dress. And while we don’t know what the dress looked like, we know that it was pastel green so I have no idea what the bride wanted.

People in the comments were also surprised by all of this. 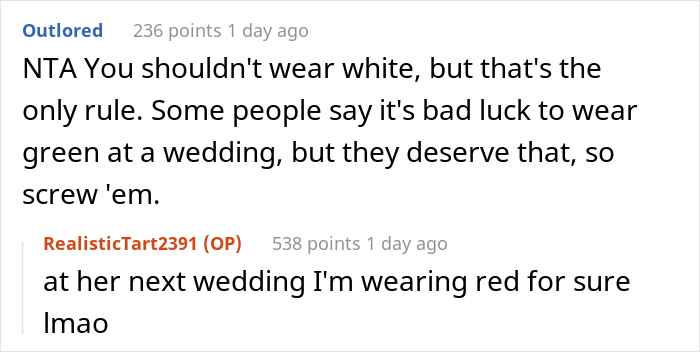 Some of them wanted more information. 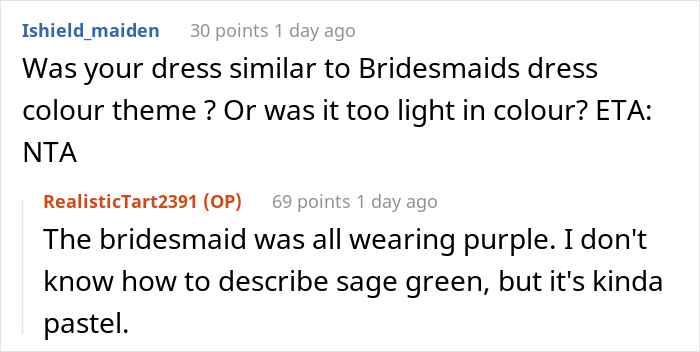 And the teen was happy to explain it all. 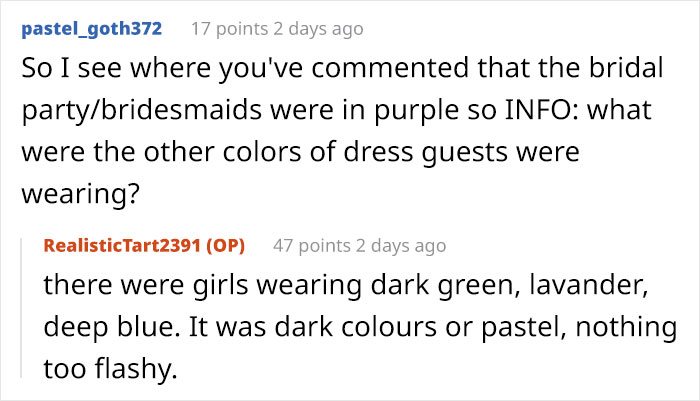 I wonder why they made it into such a huge issue. 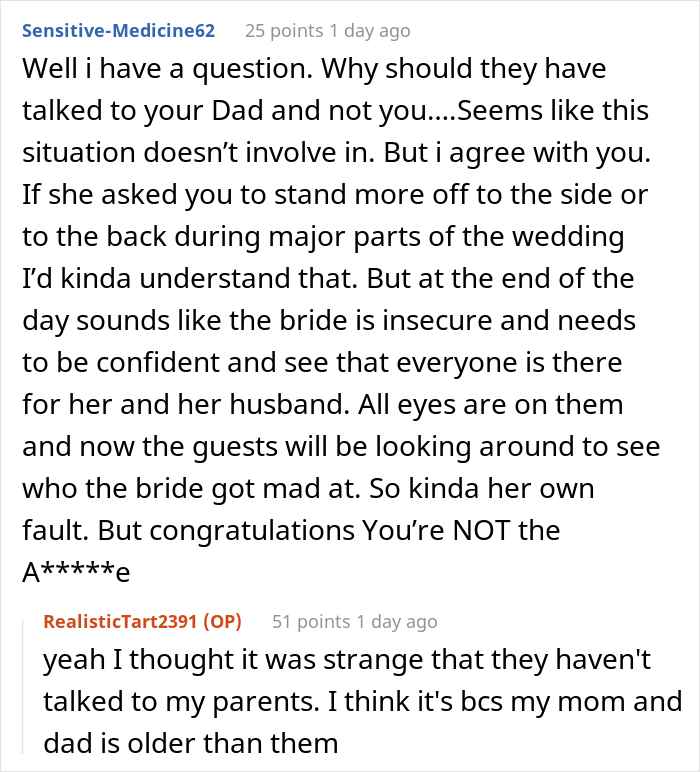 It was just a dress at the end of the day. 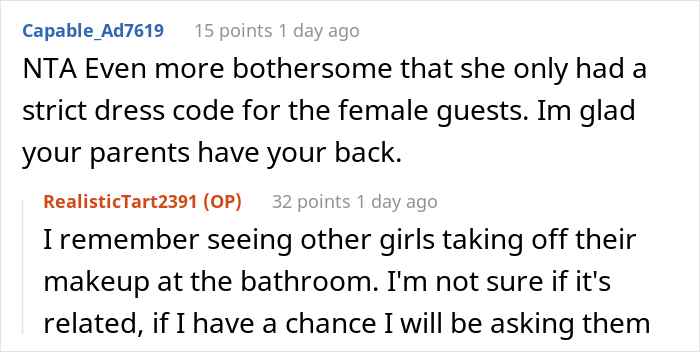 If she was wearing white, I would have understood.

But the bride blew up for no apparent reason. 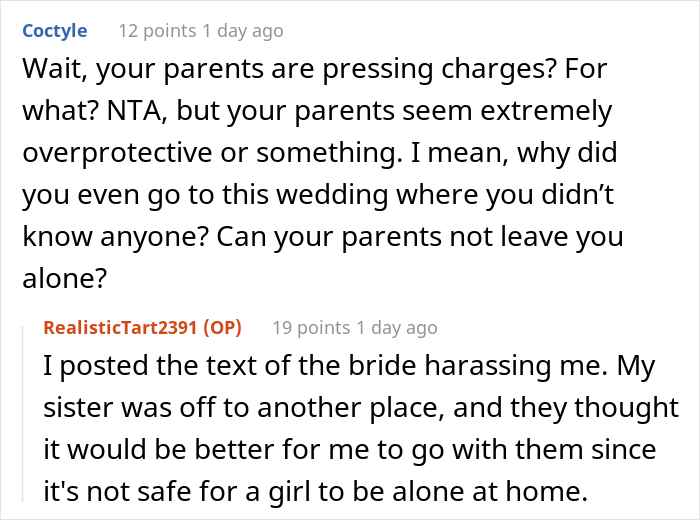 It just seems like the bride felt insecure and started projecting it onto others.

I am just glad her parents got involved.

At the end of the day, it was all the bride’s fault.

This is why going big with your wedding is not always the best choice.

She clearly wanted to pressure her into changing. 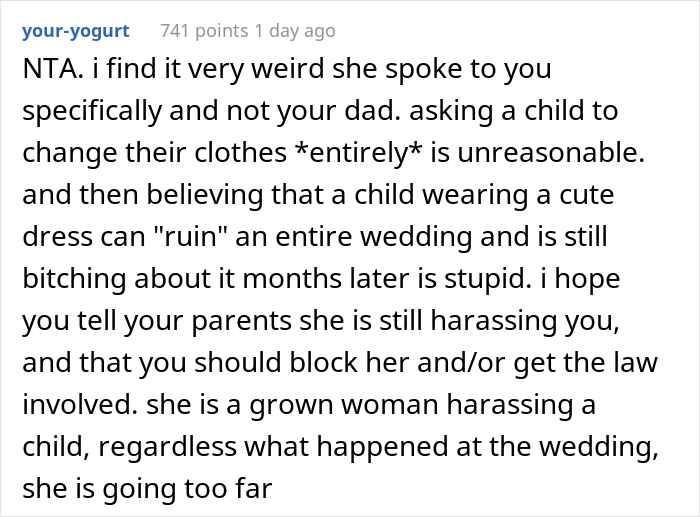 A wedding these days can’t progress without drama.

Who doesn’t wear makeup at a wedding anyway? 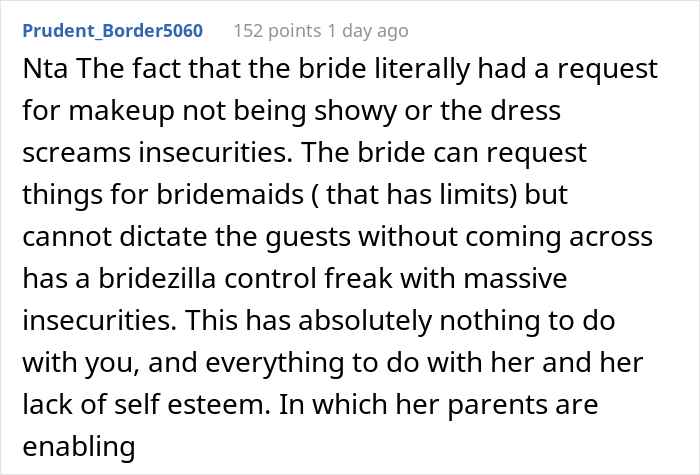 Everyone should be comfortable in their skin and the bride needs to learn this.

She needs to grow up first.

What are your thoughts on this story? Do you think the bride was just being insecure or did she have a valid reason? Do you think the teen should have just sucked it up and worn the black dress? What would you have done in her situation? Let us know in the comments below and don’t forget to share this story with your married friends so they can join in the discussion as well.