Veganism is just a lifestyle choice.

Don’t get me wrong, I truly respect people who have strong moral standards and are doing it for the Earth. And I do believe that going vegan is a good idea if you don’t have any health issues that forbid you from doing so or live in a country where it is nigh on impossible. But I don’t believe that anyone should be forced or shamed into turning vegan as it is a choice at the end of the day. But there are always going to be weird people on the vegan and meat-eating side.

Some people get really uptight when it comes to their food choices and it is always surprising to see. I can fully understand a vegan not wanting to serve animal-based food at their wedding. After all, that is their day and their choice so no one should really have a problem with that. I mean, it isn’t as if all vegans eat are fruit and vegetables. There are a lot of cuisines that are wholly vegan especially when it comes to middle-eastern food and it is damn delicious.

But this particular bridezilla took her veganism to a whole new level and decided to voice her thoughts in a public Facebook post. You can scroll below to take a look for yourself.

First of all, I was not aware that there was a group called Vegan Revolution and should we be scared? 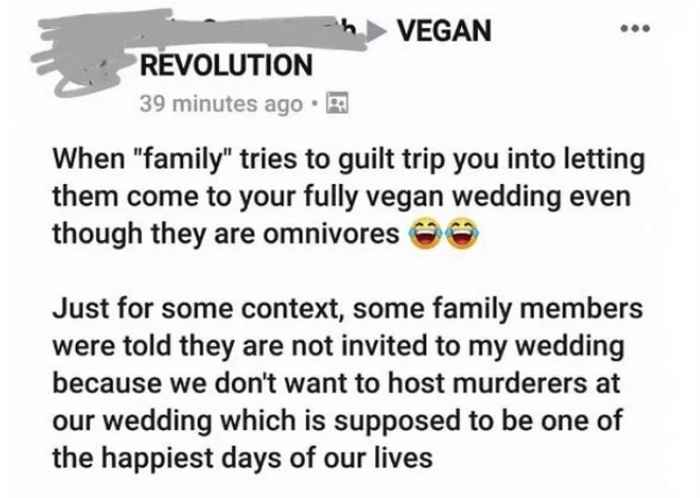 She did add a bit more information to her prior post but it didn’t help her look any better in the eyes of everyone. 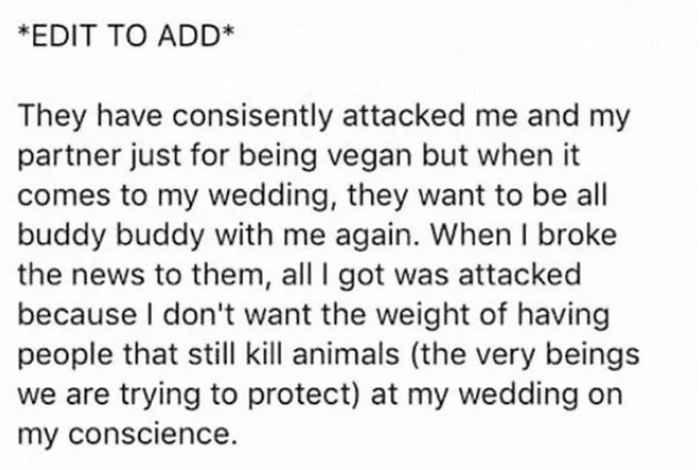 Her family might not have been supportive of her being vegan but this is taking a bit too far. 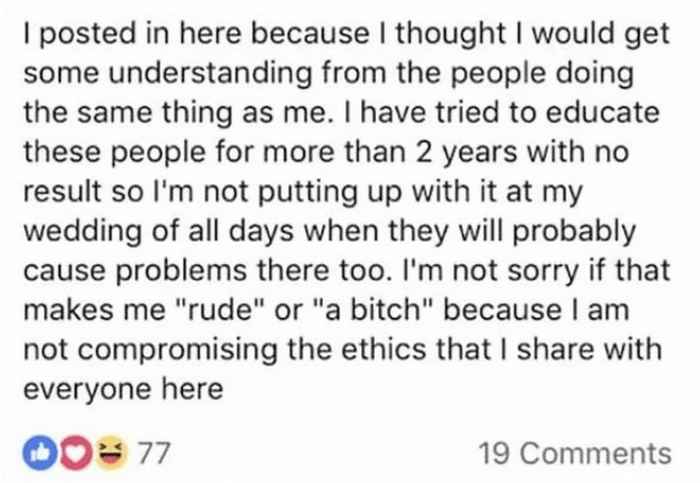 It is wholly normal for a vegan couple to not serve animal-based products at their wedding. However, what I am surprised about is why she would not invite her family. I mean people are usually okay with eating plant-based food. I mean who eats meat every day anyway? Because that doesn’t seem healthy. And even if you are obsessed with dairy and meat, a few hours without it won’t cause you to lose your mind. So unless I am missing something, she is causing drama over nothing.

Some people do tend to base their whole identity on a vegan.

Maybe she only empathizes with animals.

I would honestly be relieved if this happened in my family.

I wonder if that really happened.

But that would make too much sense and she is clearly lacking in that department.

Maybe she just doesn’t want anything to do with her family which is her prerogative.

She should find a better reason to cut ties with her family than this.

What are your thoughts on this story? Do you think she is just trying to cause drama and seems to be on a high horse? Or do you think there is more to the story and her family might be forcing her to have animal-based food at the wedding? Comment your thoughts down below and please do share this story with your friends so they can join in the discussion. Remember to remain respectful in the comments as everyone is free to speak their mind about this issue and that may not align with your thoughts.