Walney is a small village located on the coast of England. This is a picture-perfect place, one where you would not expect any mishaps to take place. However, it has been reported that underneath this façade of calmness, there is great mischief taking place.

The village is home to many inhabitants and their pets and one of these pets has been reported to be up to no good. One of the residents of this village has reported that their cat food keeps going missing and their kitchen seems to be dishevelled every time that they come home. They said it was unacceptable behaviour and have also found the culprit.

Winston is naughty and a curious cat. Living here, he has the opportunity to explore the outdoors without fear and play as much as his heart desires. It is his exploratory nature that has led to this neighbourly dispute.

One day, after coming home, Winston’s owner, Karl Hart, received a threatening letter. Scroll below to find out the whole story!

I am writing in regards to your cat, Winston. Grey Cat, Bow-tie Collar. He is a Pest. The neighbour says he is your cat.

He is constantly through our cat flap and eating all our cat’s food throughout the day. My cat needs to be on an expensive special diet, he trashes my kitchen opening cat pouches all over the floor. Each time I catch him from now on I will take him to the RSPCA, which will be inconvenient for you as I commute to work, so will be Lancaster, Kendal, Blackpool, Preston and sometimes Scotland. So each time I catch him I will take him to a different one so you will have to pick him up.

You need to maybe get him a cat flap so he isn’t locked out all day or at least feed him now and again. This is neglect. He is a beautiful boy and if I didn’t already have my cat I would take him in microchipped or not and I wouldn’t let him out.

Please keep him in or at least feed him otherwise travelling around the country with him is my next step. My cat needs his diet regulating and your cat keeps eating it all. Thank you.”

The lady whose house Winston has been exploring does not like his intruding nature. It is reported that he has been eating her cat’s food, one that is expensive and is important for her cat’s wellbeing. This lady has also gone as far as to say that Winston is a pest and has threatened to leave him at a shelter or take him with her to different areas of the country on her work trips and leave him there!

Karl, Winston’s owner, wanted to dissolve the situation, so he posted a letter on his Facebook page anonymously. He kept it anonymous because the first letter was also anonymous. He replied calmly and asked the lady to get together and reach a viable solution, one that does not involve him having to travel the country to retrieve Winston.

“To the anonymous lady in the vicinity of Verdun Avenue, Walney threatening to abduct my cat,

Firstly; let me assure you that I do appreciate your frustration with Winston coming into your house and eating your cats food. I too find other cats entering my house through the cat flap that is present and eating the food that is here. I however see it as an acceptable hazard of allowing my cat to come and go as he pleases.

Secondly; please be assured that as I do not follow Winston on his adventures, and he doesn’t report back to me on them, the letter you posted through my door was the first I’ve heard of him freeloading off you!”

“In all seriousness, to prevent what appears to be your objective of making my life hard by travelling around the country to retrieve my cat (in no way stopping him helping himself to your cat’s food once he’s home and exploring again) I would like to offer to buy you a new cat flap that only your cat can access. If (hopefully) you are a member of this group please get in touch with me to organise a rational solution to this issue.

Also, if you happen to be friends with the lady please pass this message along. Kind regards, Karl”

This exchange was posted on Facebook where it has gathered quite some attention with people in the group making many cat puns to commemorate this memorable exchange.

“Sounds like a bit of a cat-astrophe to me.”

“Doesn’t sound like she’s feline fine, take her some whiskers round to cheer her up.”

“Maybe her cat invited him over for a spot of dinner, he is dressed for the occasion with his little dickie bow on…” 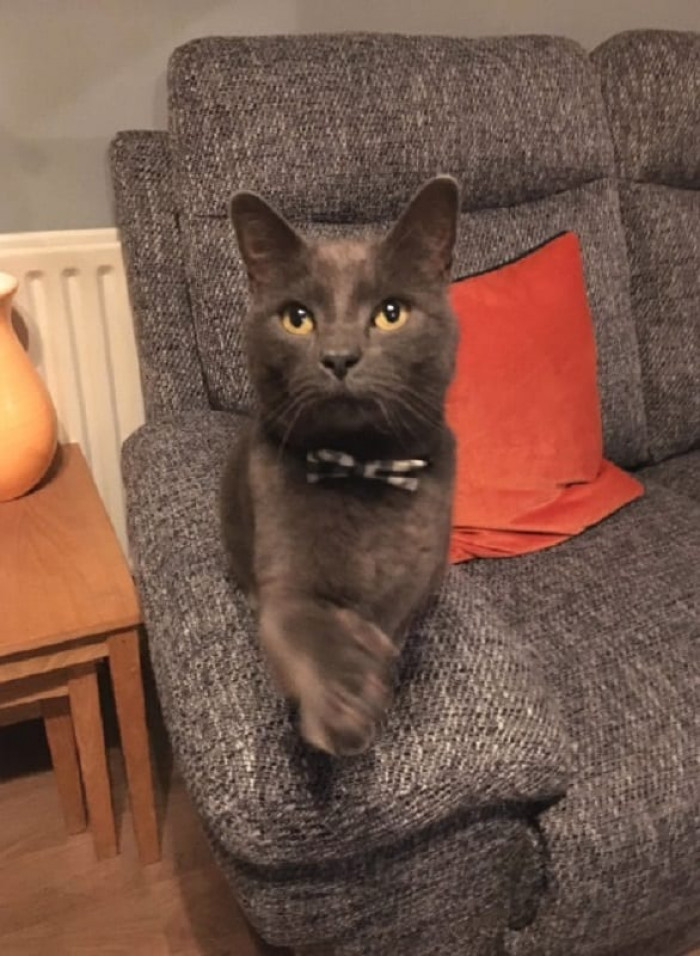 While some people have taken this lightly, others have taken to the comment section to offer solutions for this cat dilemma. People have reprimanded this anonymous lady for berating an innocent cat over simply being curious. Some people have also spoken up about how it is highly unethical to threaten Winton’s owner with the idea that she will abduct Winston and take him to another part of the country. One individual also stated that it is selfish of her to burden charities already stretched to their length by giving away a cat who has a loving and caring home. 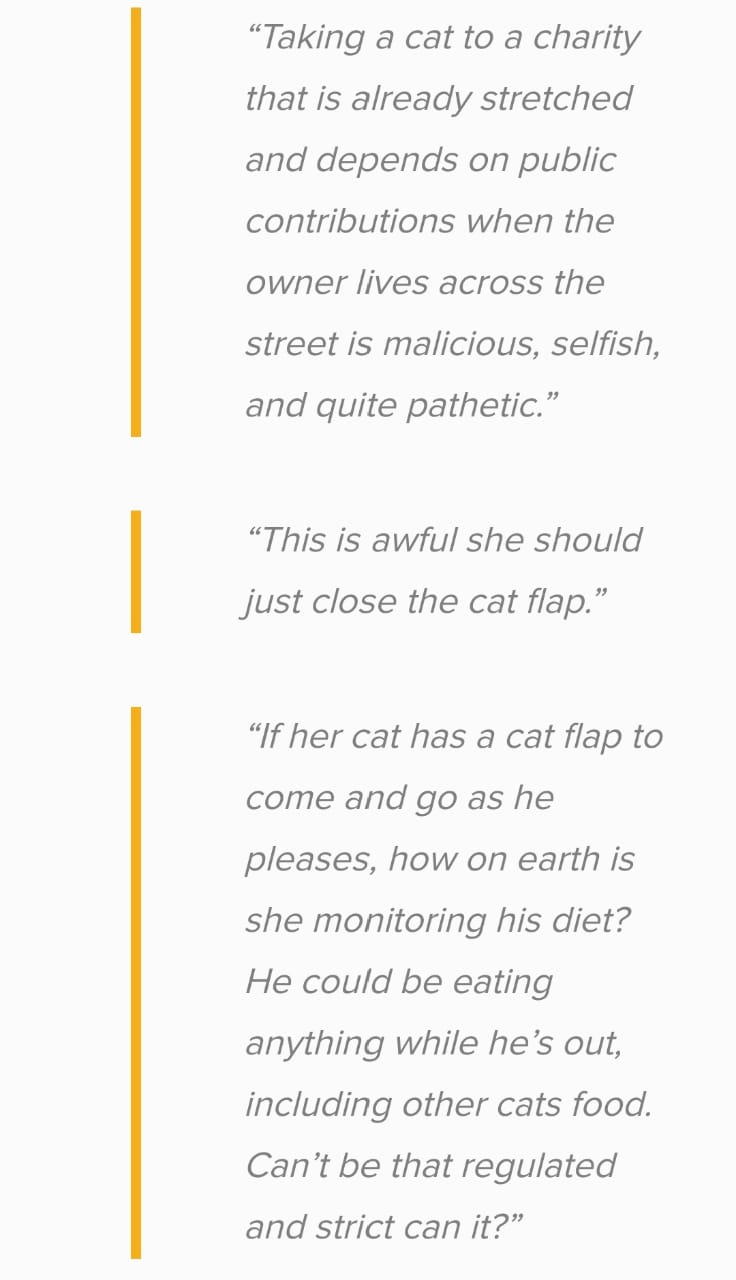 Fortunately, now some technologies are built, for example, automatic cat feeder. It is also helpful to train your cat to get used to random animals coming to the house.

There are various other creative technologies like Microchip pet doors. It requires you to attach a chip to your cat and only those cats with registered chips attached to them are allowed to enter the door.

You can purchase it by clicking here.

Many people have to deal with such situations if there are a lot of cats in the neighbourhood. You cannot stop cats from roaming around. You can ensure your doors are locked so other cats do not enter your house, but the onus can’t be placed on the pet owner. Cats make their own rules.

Have you ever dealt with anything similar? Let us know in the comments how you would have dissolved the situation.