Cats are weird, to say the least.

When you hear the word “cat”, what comes to your mind? I’m sure it is either their cuteness or their fluffy fur. Yes, cats are adorable. They are an absolutely beautiful sight to look at. They can be graceful and charming. However, that isn’t all there is to them. They aren’t just a pretty face. Cats have very strong personalities. They are extremely moody but also very playful. If you’ve ever seen a cat get the zoomies, you would know. Any cat owner would know that their cats are super smart, but only to a certain extent. They can crack the most difficult codes but sometimes derp out at the simplest of things.

You will never be bored if you have a cat as a pet. They will keep you entertained all day long, and that is why we love them. We might not understand their hilarious shenanigans, but we enjoy witnessing them. Cat logic is something we will never acknowledge, but that is okay. Some cats don’t know how to react to closed doors and we have gathered a few stories about that down below. If you’ve never witnessed a cat next to a closed-door, scroll down below and you will have an idea about why it is so hilarious:

It all started with this wholesome Reddit post about a cat waiting outside the door for his human buddy to wake up. 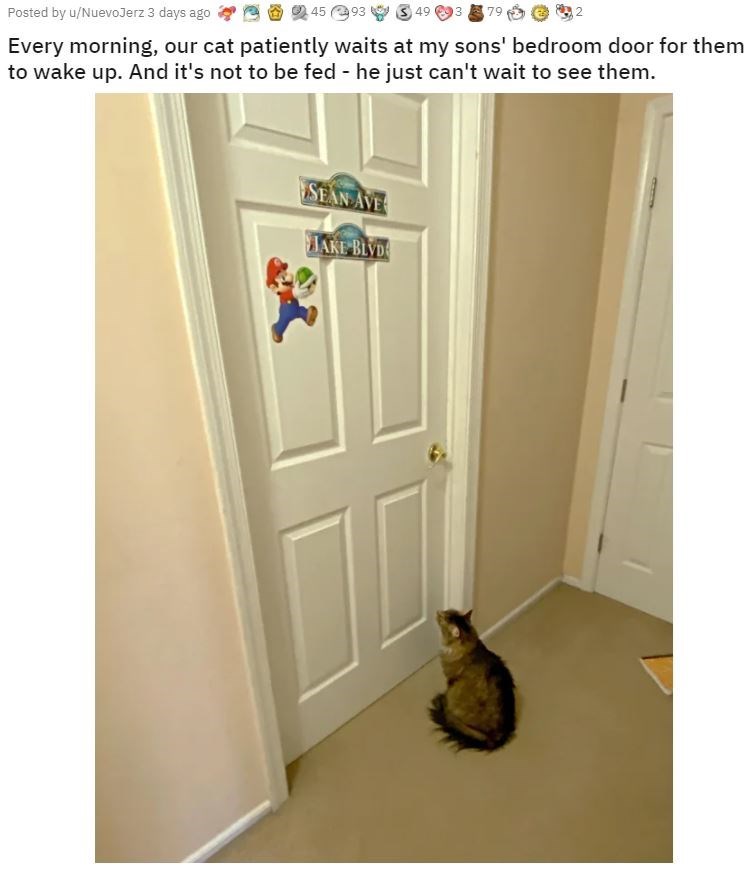 People immediately started sharing their own experiences of their cats with closed doors in the comments.

However, the comments weren’t as wholesome as the original post.

Cats are ninjas and you can’t make us believe otherwise.

Even though it is annoying to constantly open and close the door for your cat, you still like having them around.

Cats are pretty clever and if they figure out how to open doors themselves, it is game over for you.

Do you see these comments? See how entertaining cats can be? Sure, you might get annoyed by them if they wake you up in the middle of the night so you would feed them, but you will love them anyway. I, personally, hate keeping my doors open. It annoys me. But after 4 cats, I have learned to live with it. Cats and closed doors just don’t go together and you have to accept it at one point. Scroll down below to read more hilarious stories:

They act as if it is the end of the world if the door stays closed.

It is not a pleasant experience being woken up at 5 am but you get used to it after a while.

Well, that is one way to describe your cat.

They don’t want to come inside. They just want the door open at all times.

Yes, cats can be jerks. But we love them anyway.

Get up and give them some food!

Does your cat do the same when your door is closed? Share your stories with us in the comments below!