Even though your doctor might give you a timeline of when you will recover, your body doesn’t always follow it. I myself had surgery 20 days ago and while I was supposed to be up and about for work and such in 4-5 days, I couldn’t even sit straight without pain after 10 days. So I can understand the lethargy, pain and overall suckiness one feels post-op.

However, that certainly doesn’t give anyone an excuse to act like a complete a**hole. But that is exactly what this woman did. Apparently having your ingrown nail removed puts you out for two weeks. And while it is okay to not feel 100% after two weeks, what is not okay is acting like this and demanding things from people who are trying to help you.

If I did this my friend would have left me mid-surgery. So scroll on below and take a look for yourself.

Would it have been that hard not to curse at that moment and just ask nicely? 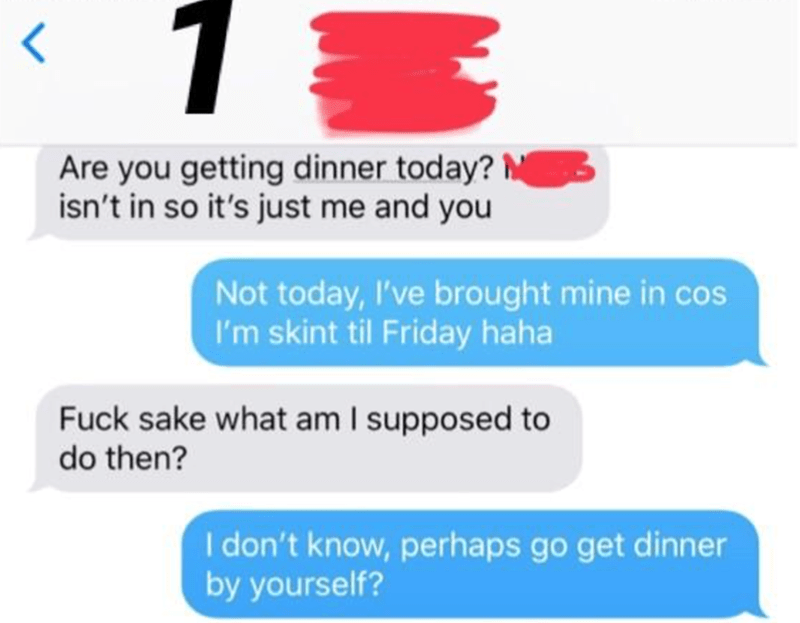 Everyone has their own problems to deal with and this lady is infuriating. 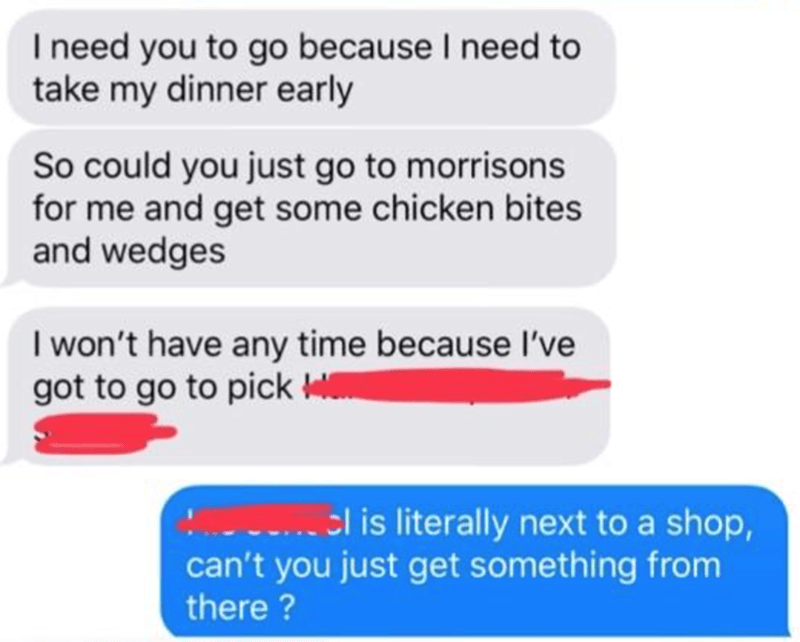 Are we sure this is a working woman? Because she is acting like a bratty child. 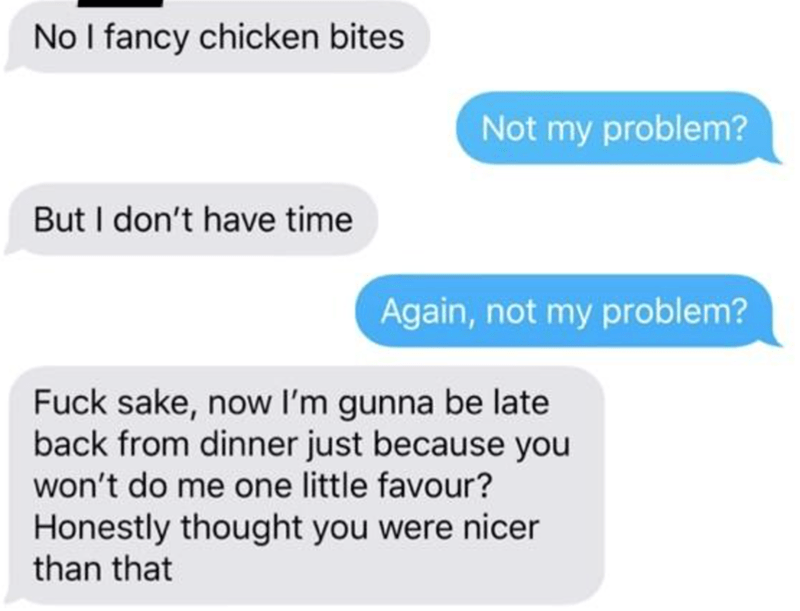 If she had just been a decent human being, maybe would be nice back to her as well. 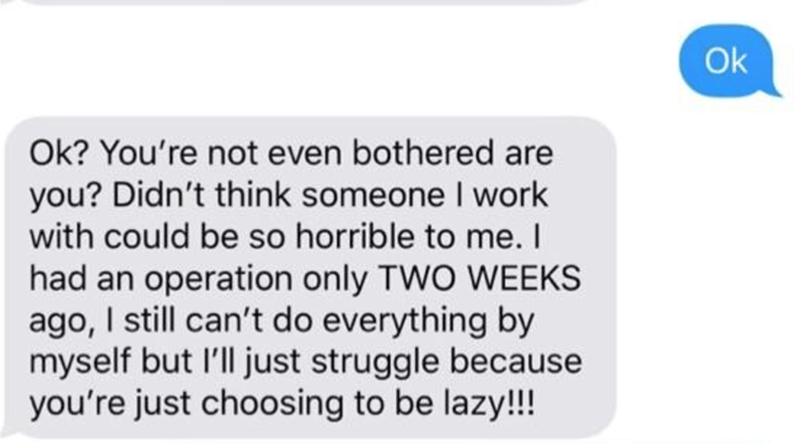 I’ve had half my toenail (on my big toe mind you) removed and I was back to work standing on it for 5 hours fine 2 days later. This just sounds like a lazy a**. –Moony0523

She honestly learned nothing from that whole exchange, did she? 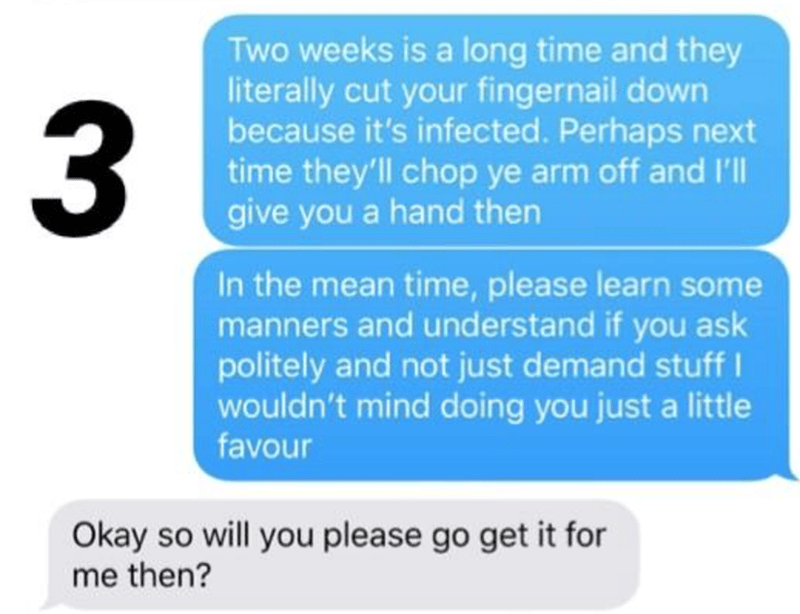 So basically adding please to a statement somehow makes the cursing before okay?

Losing a toe-nail and have a doc cut your ingrown (infected) toe-nail out is slightly different though. I had a bandage wrapped around my foot for a whole week and had to keep it higher than my heart otherwise the blood would have come out.

They wrapped it around my toe ~20 and it looked so stupid but it was still blood-soaked the next few days (the doctor had to change the bandage every day) Wasn’t allowed to work for 2 weeks and even during the third week, when I was back at work, my sock was full of blood and my toe kind of still hurt when I got home.

A friend couldn‘t work for 4 weeks so it depends I guess. Dominik3110

Exactly! Just because you had surgery doesn’t mean you get to act like a child. 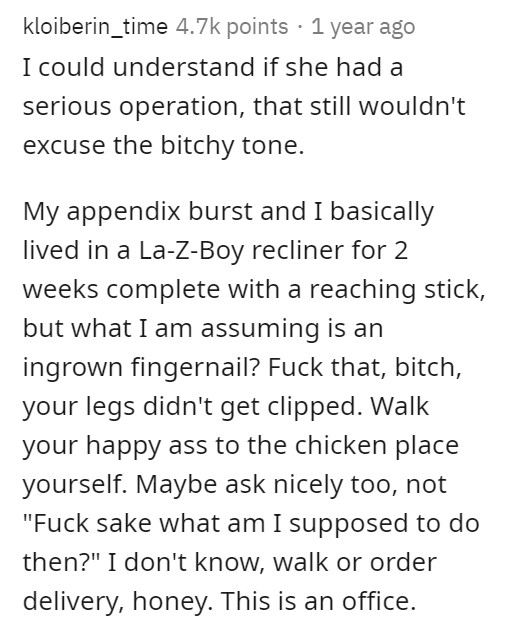 Bosses daughter – only has a job because of that reason and gets away with everything!

Start my new job in three weeks so I won’t have to put up with her much longer… wish me luck that there’s no CB’s there hahaha. –fandangooo_

Getting around slower is better than demanding help from everyone. 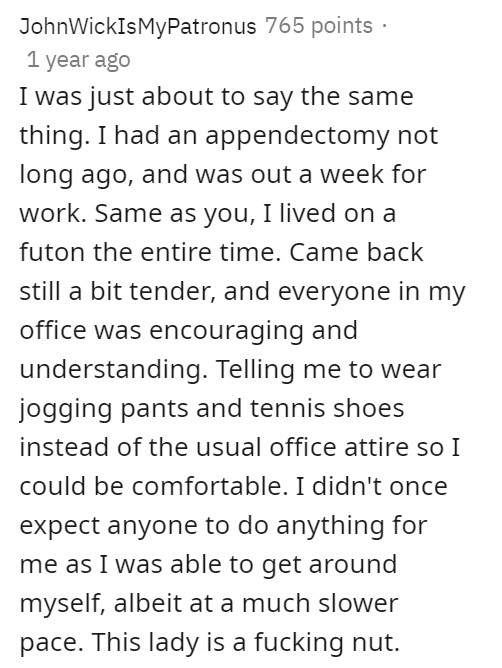 I’ve had an ingrown nail and it is not a big deal as this woman is making it out to be. 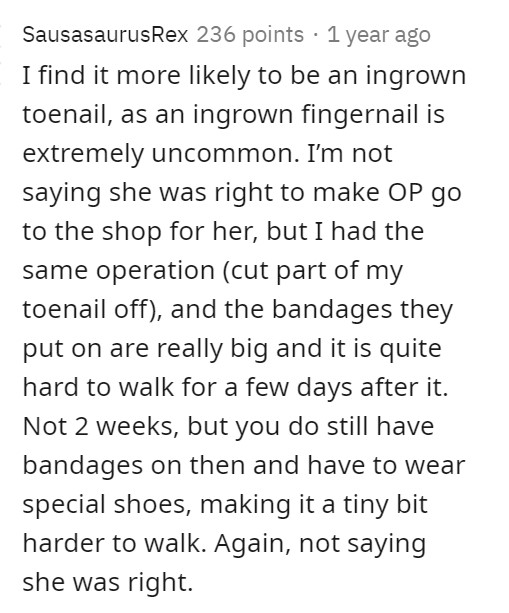 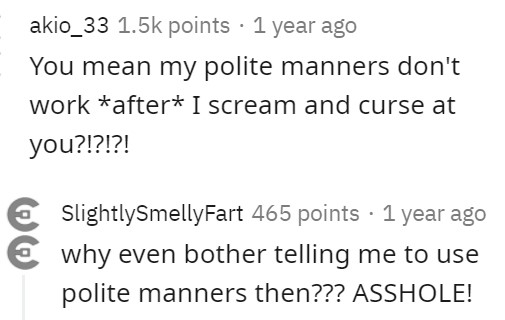 If someone post-op acted this way around you, what would you do? Would you help them anyway? Let us know in the comments below.