If you believe your journey would not end after you die and you want to leave a piece of yourself for your loved ones to remember you, you might want to choose a thought provoking epitaph. Many people resort to creepy and shrilling tombstones from which we can induce they liked tormenting people for the fun of it. On the other hand, some people choose wise words to depict the stories of their lives or the thoughts that dominated their lives and minds.

Most people do not get to choose what words they want to leave on their tombstones but some are able to decide on the right time. Below are pictures of some very mysterious and horrific inscriptions marked on headstones of the deceased. These would amuse whoever passes them even now years after they were marked.

Scroll down below to see some very nerve-racking tombstone messages! 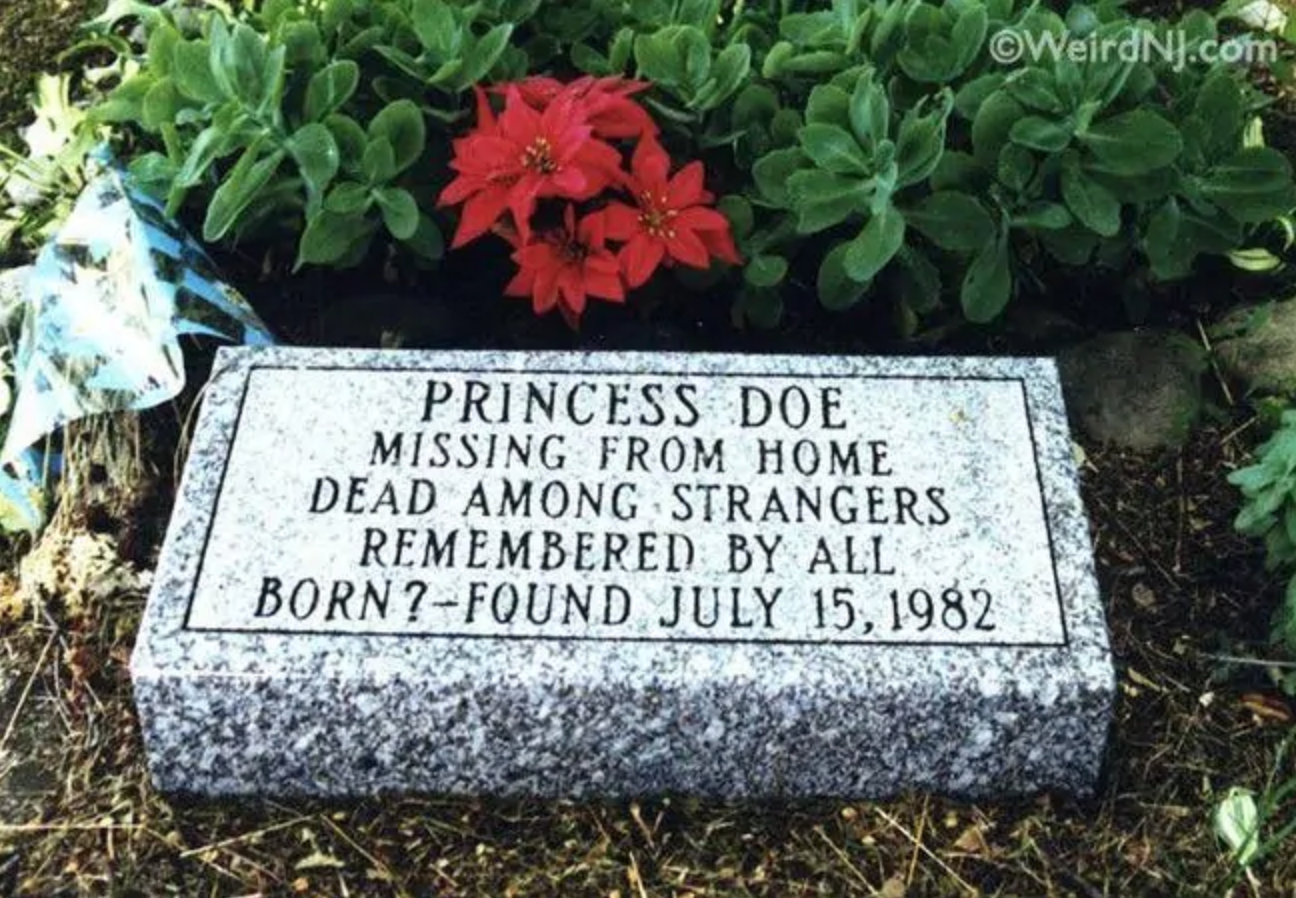 On July of 1982, a young teenage girl was brutally beaten to death and her body was thrown next to the cemetery grounds into a ravine. Despite being healthy enough to be identified and even after thorough investigation, the body was never identified. She was named ‘doe’ hence, her tombstone also reads ‘Princess Doe’. 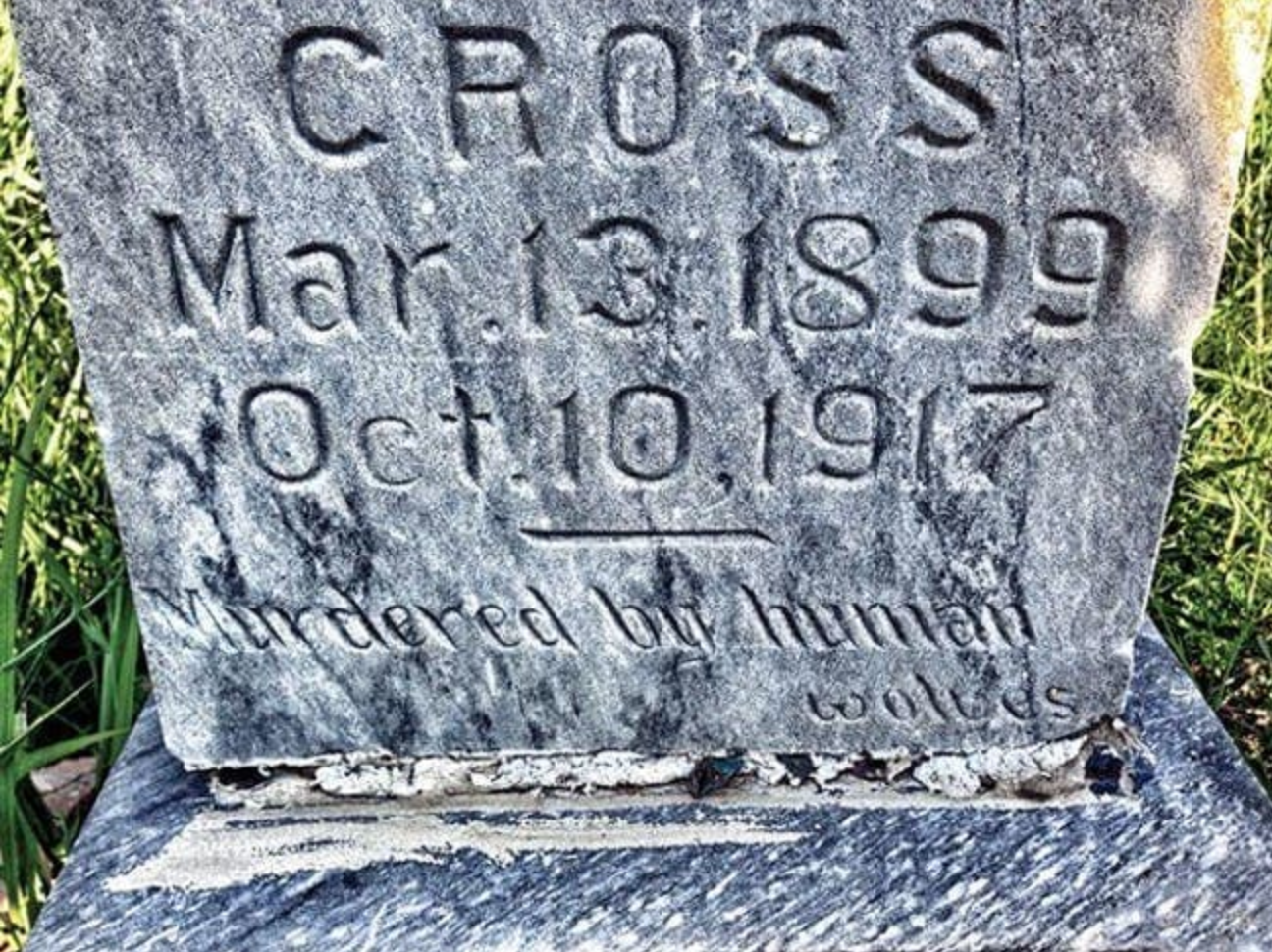 Though the tombstone reads wolves, its actual purpose is to refer to the brutal and monstrous operation done by a doctor on a female patient. During times when abortion was illegal and looked down upon, a female patient who went to get an abortion was murdered along with her fetus. The charges on Dr. A.H Yates, who performed this criminal practice, were dismissed and he was released from custody. Unfortunately, the only thing that satisfied the victim’s patients were the words inscribed on the tombstone. 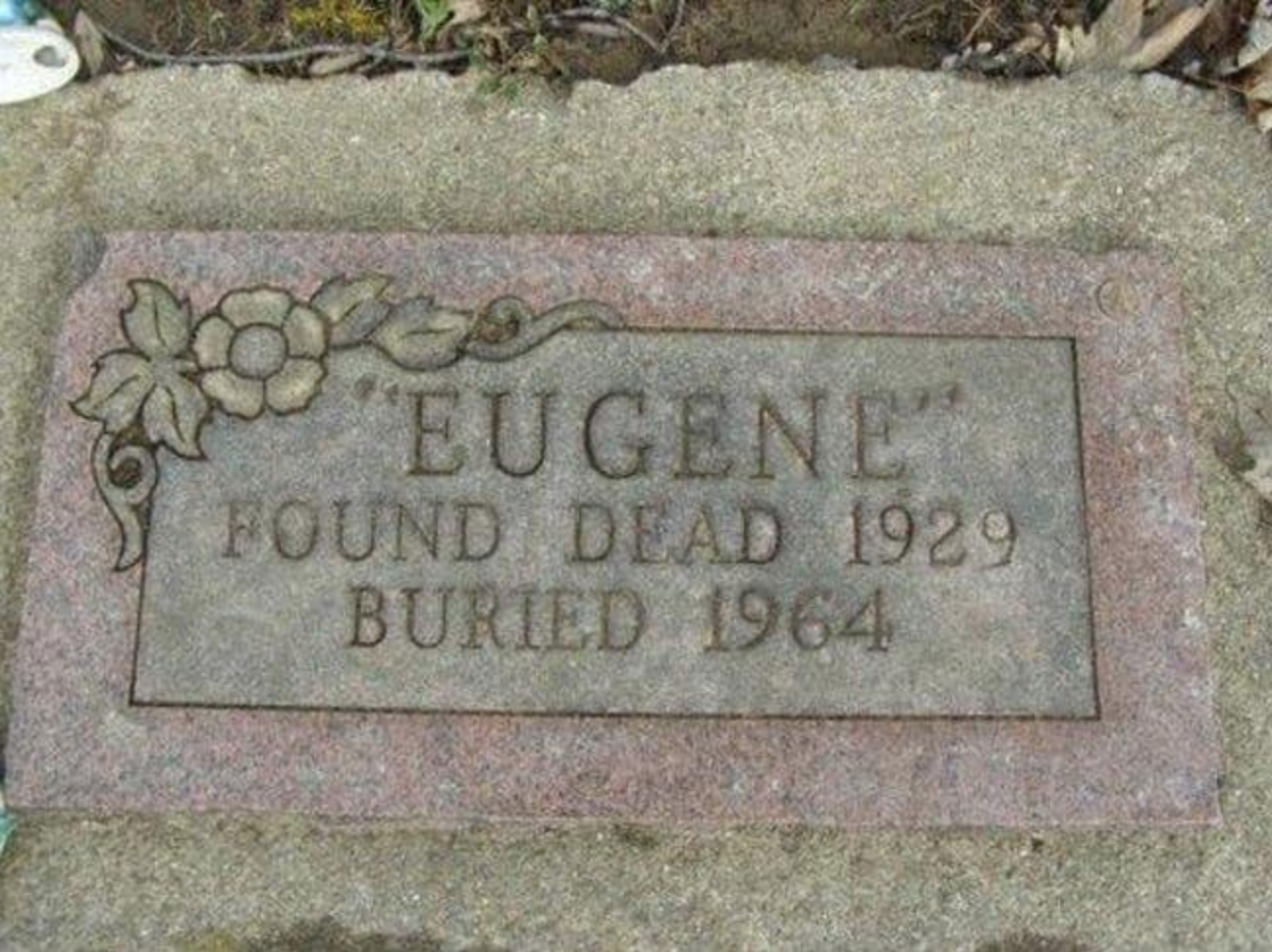 In the year 1929, a guy mysteriously appeared on a road in Ohio. No one knew where it came from and neither was there any identification possible. The authorities found an address on the body but it led them to an empty plot. They then named the body after a neighbor they found near plot, called ‘Eugene’. The creepiest thing about this story is that the body was displayed on a roadside, which served as an attraction mummy for the tourists. The authorities did however, change the body’s clothes every year. He was finally laid to rest after 35 years! 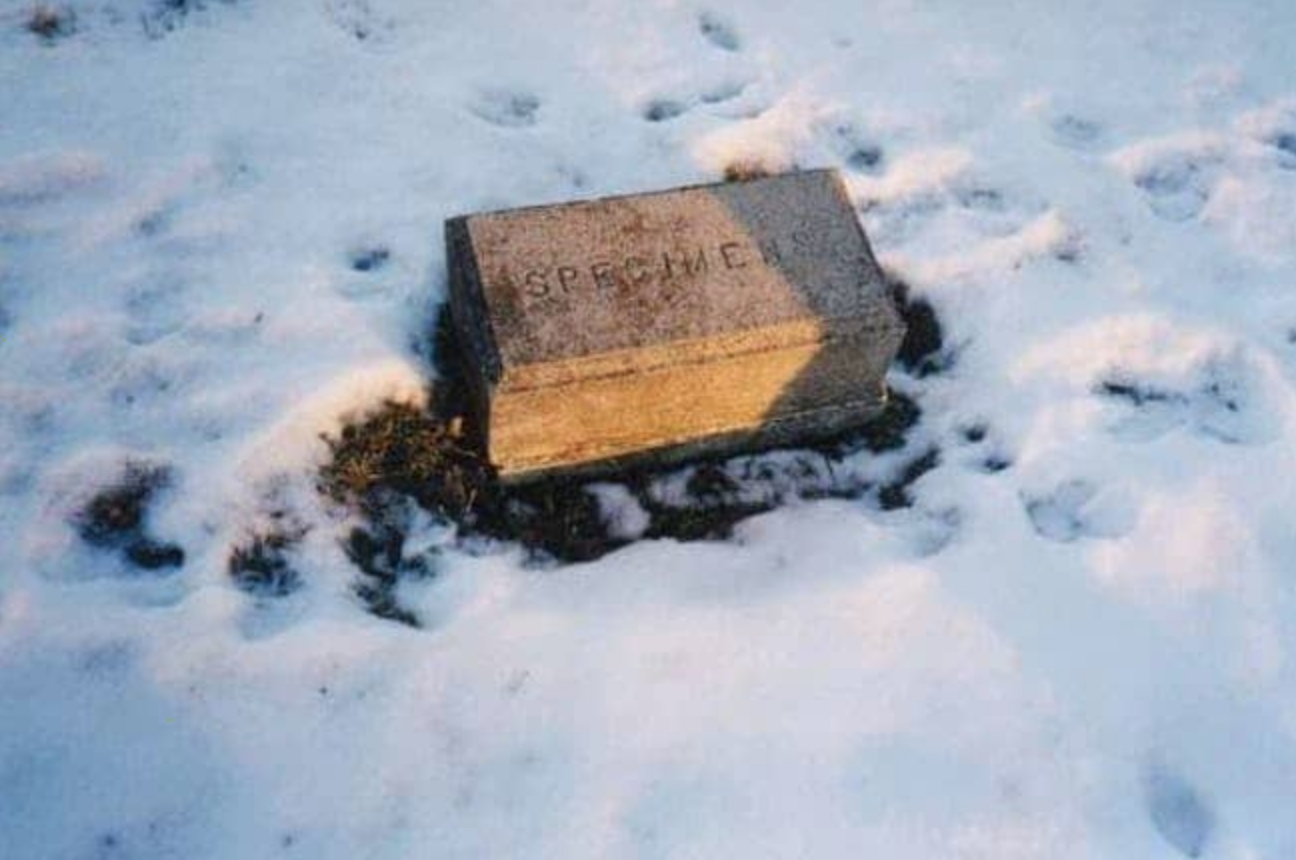 Ohio Asylum is known for its creepy and thrilling gravestones. However, two of those gravestones are amongst the  the most horrific ones. These tombstones read the word ‘specimens’ only, with no other details like date or a name. What freaks people out is the imagination of what could the word ‘specimens’ possibly be referring to. What are these specimens of? Many theories have been made e.g. specimens of body parts of the deceased or bodies of children on whom the untested medications were tested. 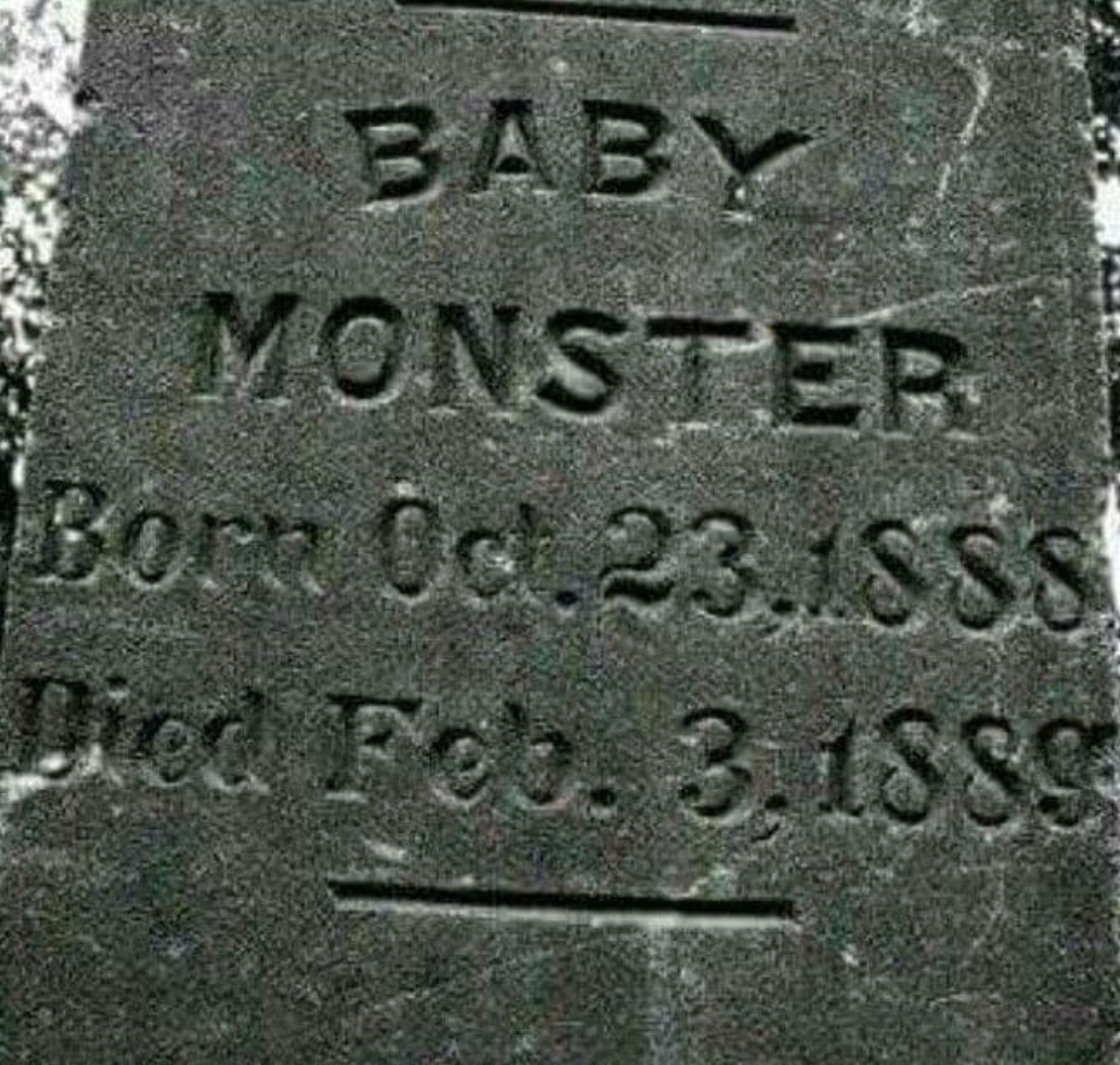 This tombstone was inscribed in a time when the word ‘monster’ was often used to describe a person with severed deformities in any form. Considering that and also the short span of time for which the baby lived, it can be theorized that the baby was severely deformed and could not live for long. The death of the baby is not certain and it is intriguing to know that no real name was given to the baby. 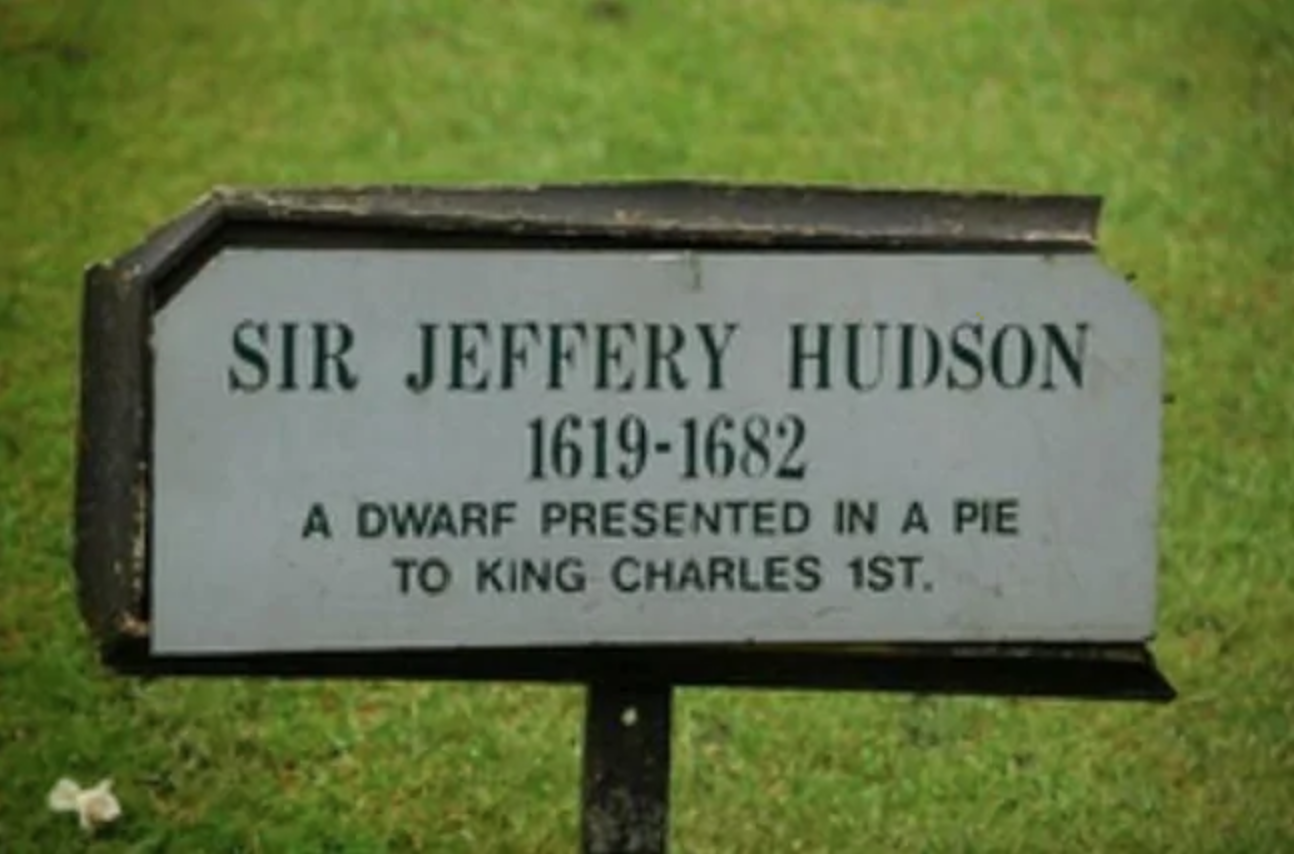 Sir Jeffery Hudson was an valued companion of King Charles and the Queen. He was often referred to as the King’s ‘Dwarf’. His duties included spying for the king, serving as a slave or storytelling in the English court. He was first presented to the king in the court when he leaped out of a pie to surprise the king. He was nicknamed ‘Lord Minimus’. He passed away in 1682 and was buried in mass grave. 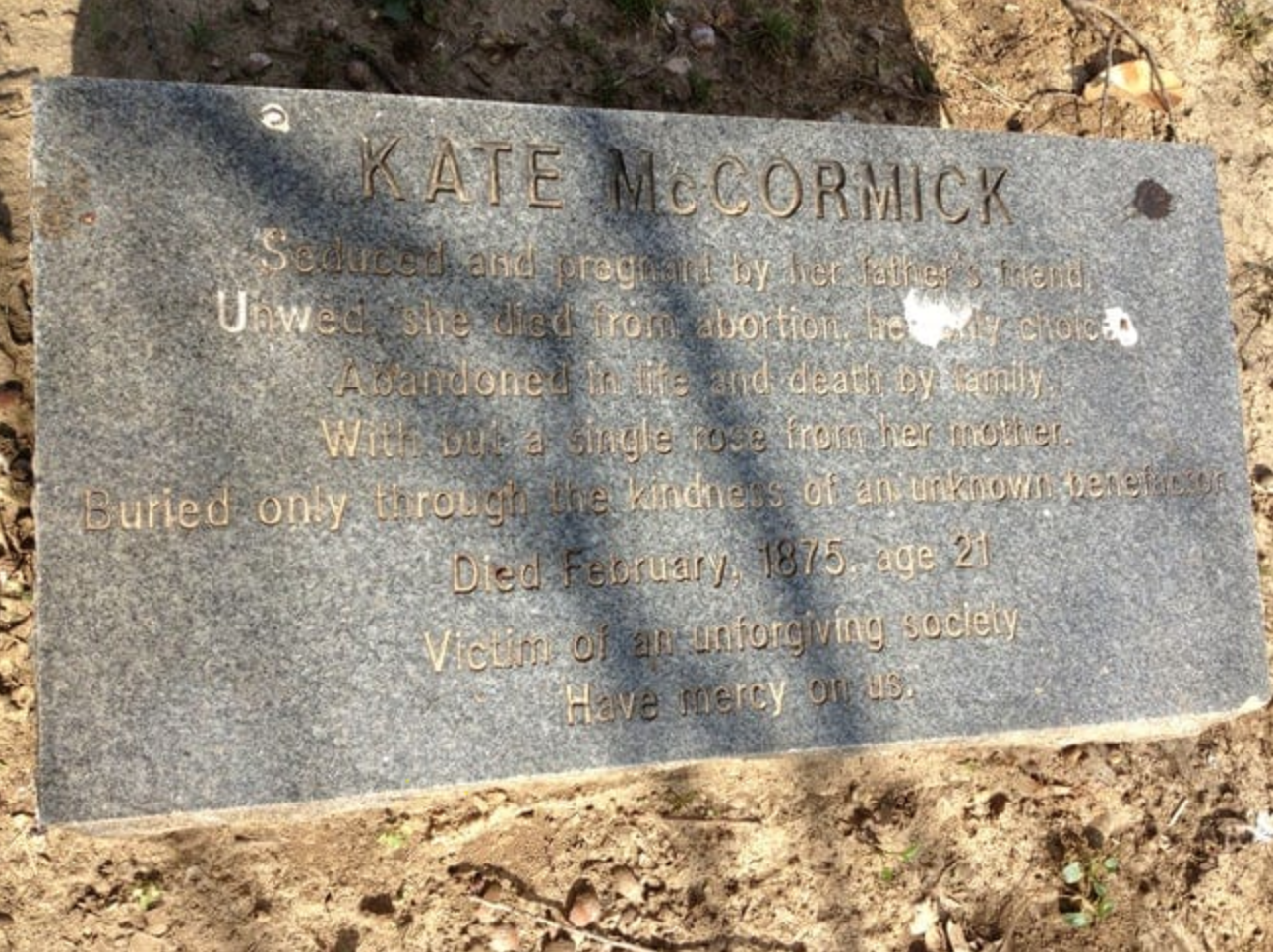 This tombstone is of a girl who died a sad death. She passed away in very unfortunate circumstances. She was impregnated before marriage after which she struggled to get abortion for her parent’s honor. When making her tombstone, the creators could not help but feel guilty for her story. The words on the tombstone describe how unfair and unforgiving the cruel society had been to her.

“Kate McCormick Seduced and pregnant by her father’s friend, unwed, she died from abortion, her only choice. Abandoned in life and death by family. With but a single rose from her mother. Buried only through the kindness of unknown benefactors. Died Feb.1875 age 21. Victim of an unforgiving society, Have mercy on us.” 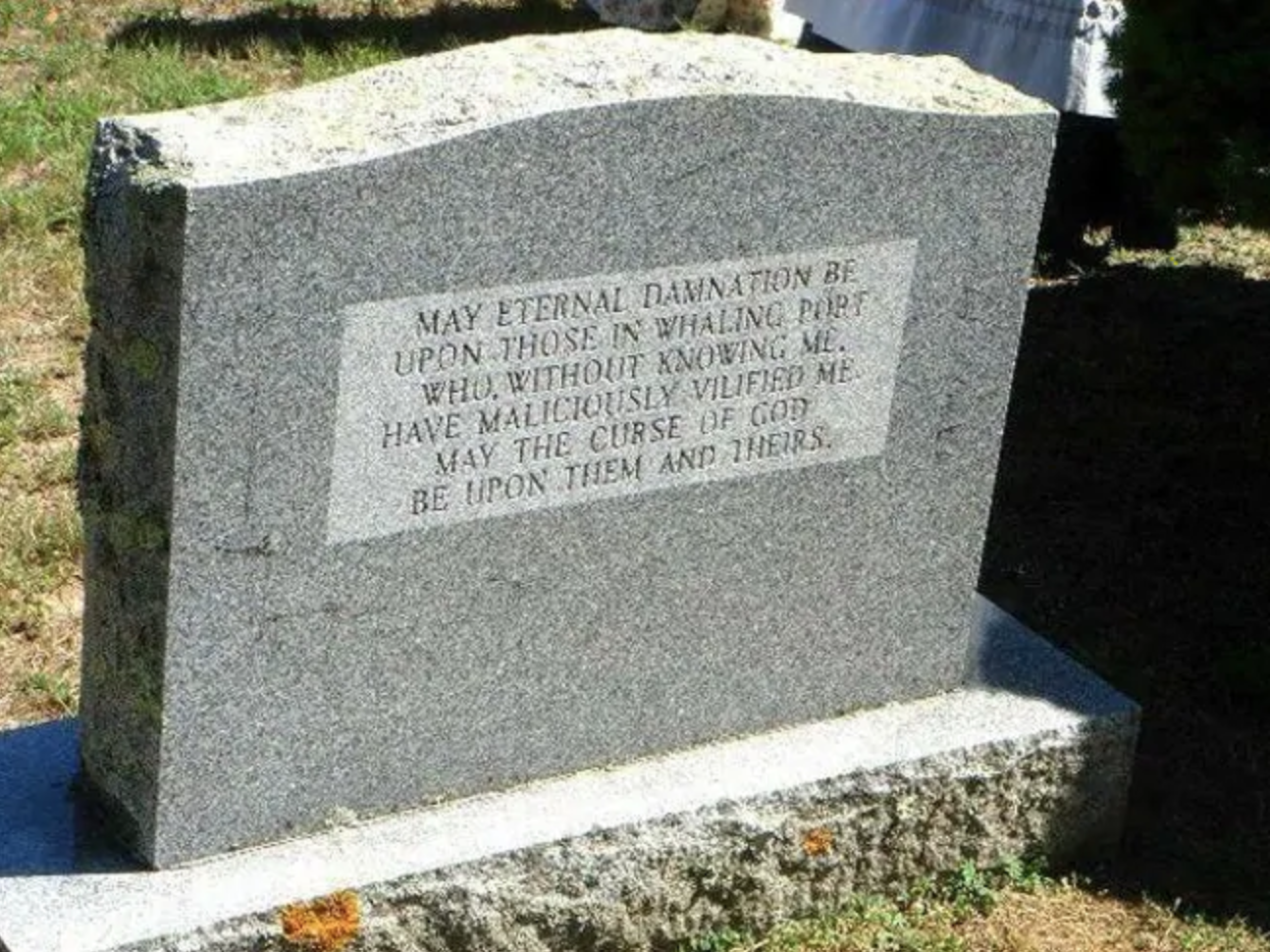 As shown by the words on the tombstone, Mary C.Dolencie felt nothing but anger towards her neighbors. The delusions she had of her neighbors conspiring against her are depicted on this tombstone, though with anonymity. She left all her possessions to the Massachusetts Society for the Prevention of Cruelty to Animals after her death in 1985. The neighbors reported how the deceased used to constantly indulge in petty fights and negative behaviors. They say though the deceased cursed the community in her last words, they saw no effect of it after the death. 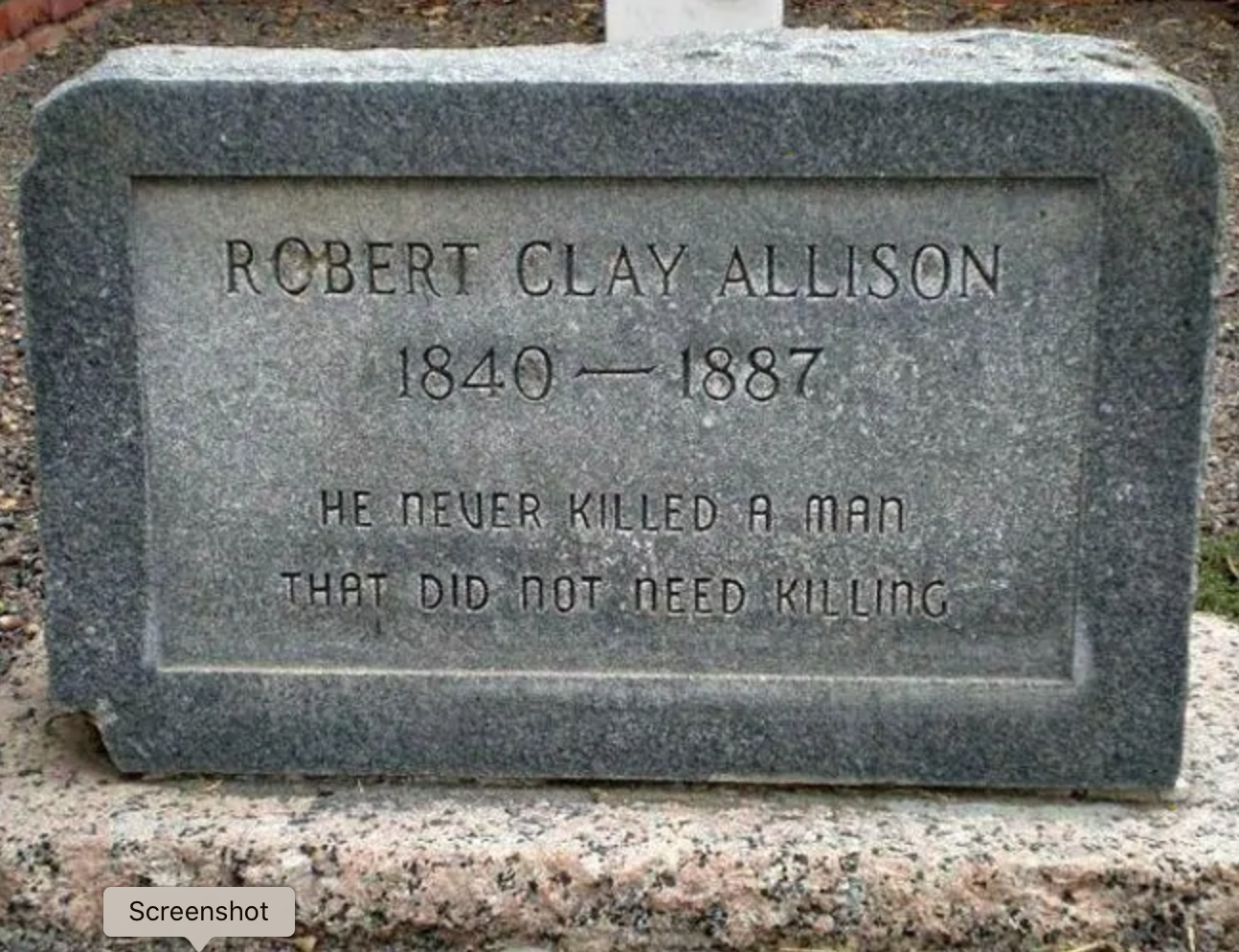 Clay Alison, died in 1997, is known to have killed many people who he perceived as a threat to everyone. After participating in the confederacy for the civil war, he became a rancher and a gunfighter. He killed anyone who challenged his plans and work, some were even people of the law. He is known for his violent acts and for breaking into jails and lynching.

He passed away at the age of 46 when someone rode a wagon over him and broke his neck. 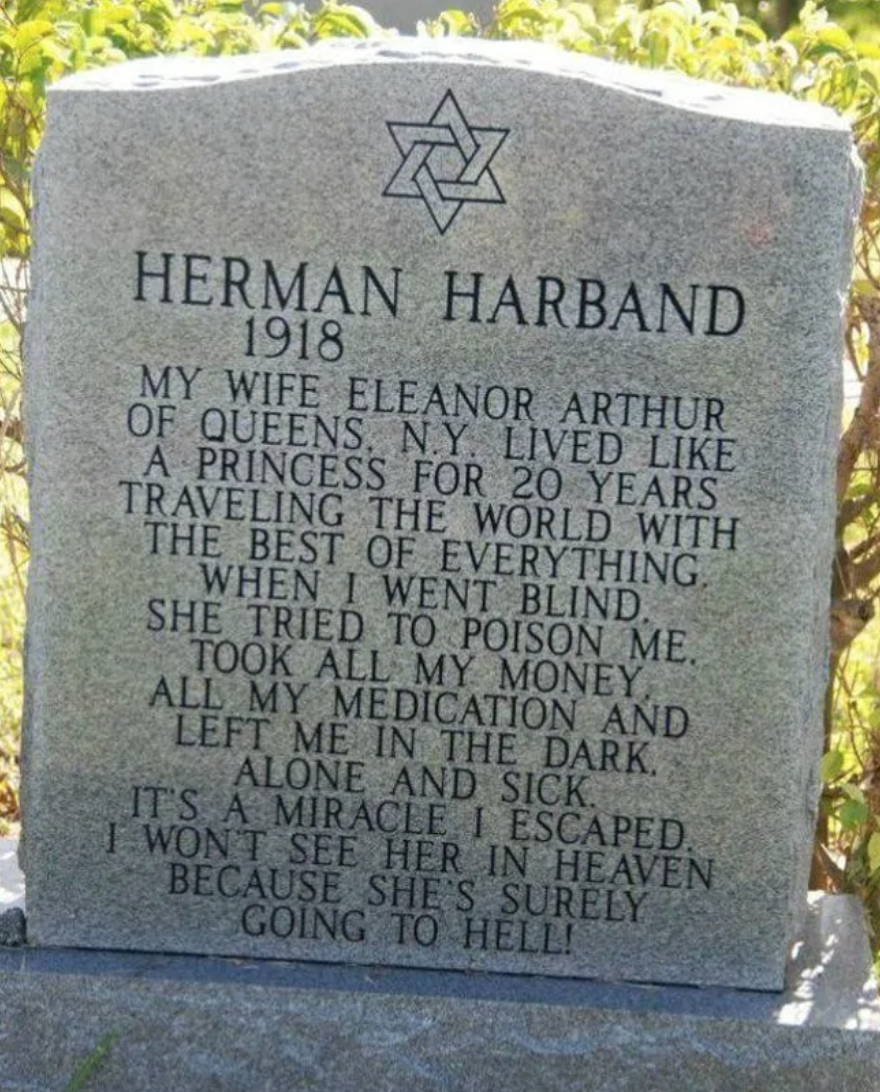 This tombstone was created before the referred person even passed away. He ordered this after his divorce with his first wife and the words used here show the mindset he developed at that time. Fortunately, he was able to move on from that unfortunate phase of his life. He had a happy second marriage and later he died a normal death in 2011 in north Carolina while this old headstone remains in Florida. 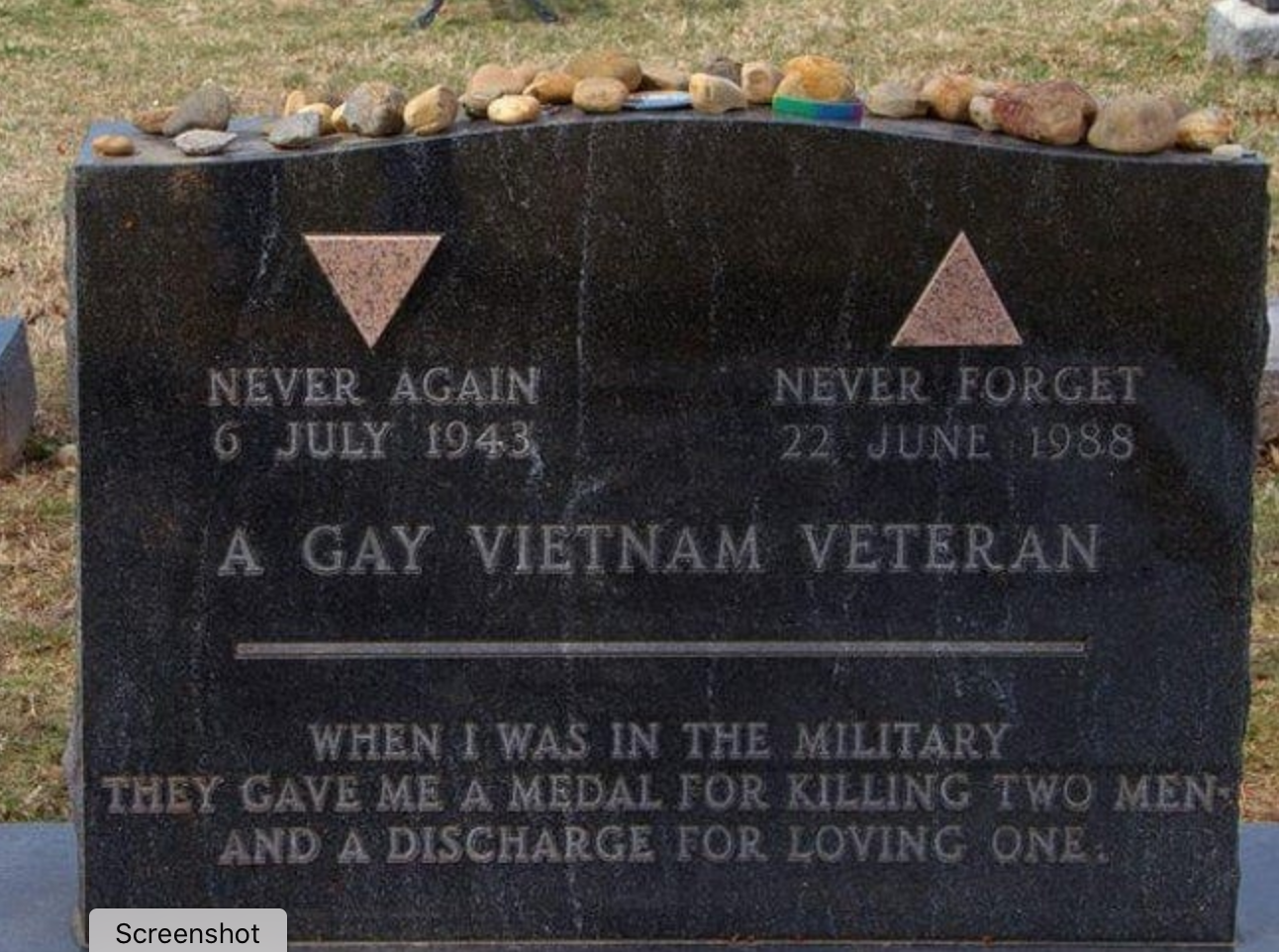 This tombstone provokes a thought as to why isn’t the name of the person mentioned? Why are some characters of his personality used as his identifier? This tombstone belongs to Leo Matlovich who was a war hero in the Air force. He took the initiative to question the policies in the air force regarding homosexuals’ involvement in the military. He fought for rights of gay men and women in the military and the impact continues to exist till this date. He also received a bronze star and purple heart for his promising service before he was asked to leave for homosexual activity. He passed away in 1988 in San Francisco due to HIV/AIDS. 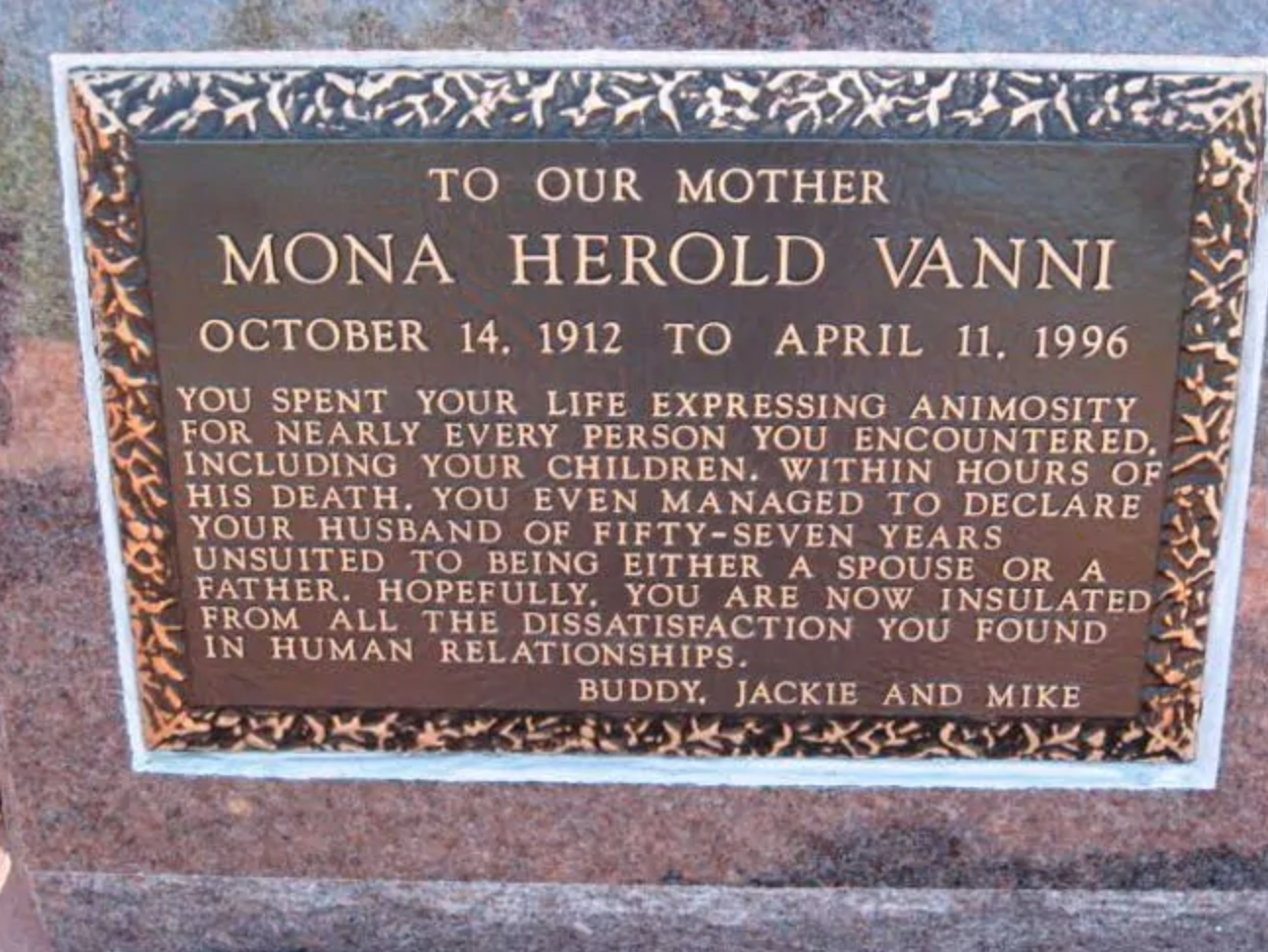 The tombstone described how horribly the mother mistreated her children. Her children still suffer from the scars followed by the hurt their mother caused them. they felt so disconnected with their mother that she refused to attend her funeral, but agreed to leave this last messaged for their mother and her ill behavior.

One of the children says ‘’ “The sentiments on her grave barely covers the brutal treatment we each received. I got the worst as I looked and acted like my father who I never saw as a little child. He was killed in WWII.” 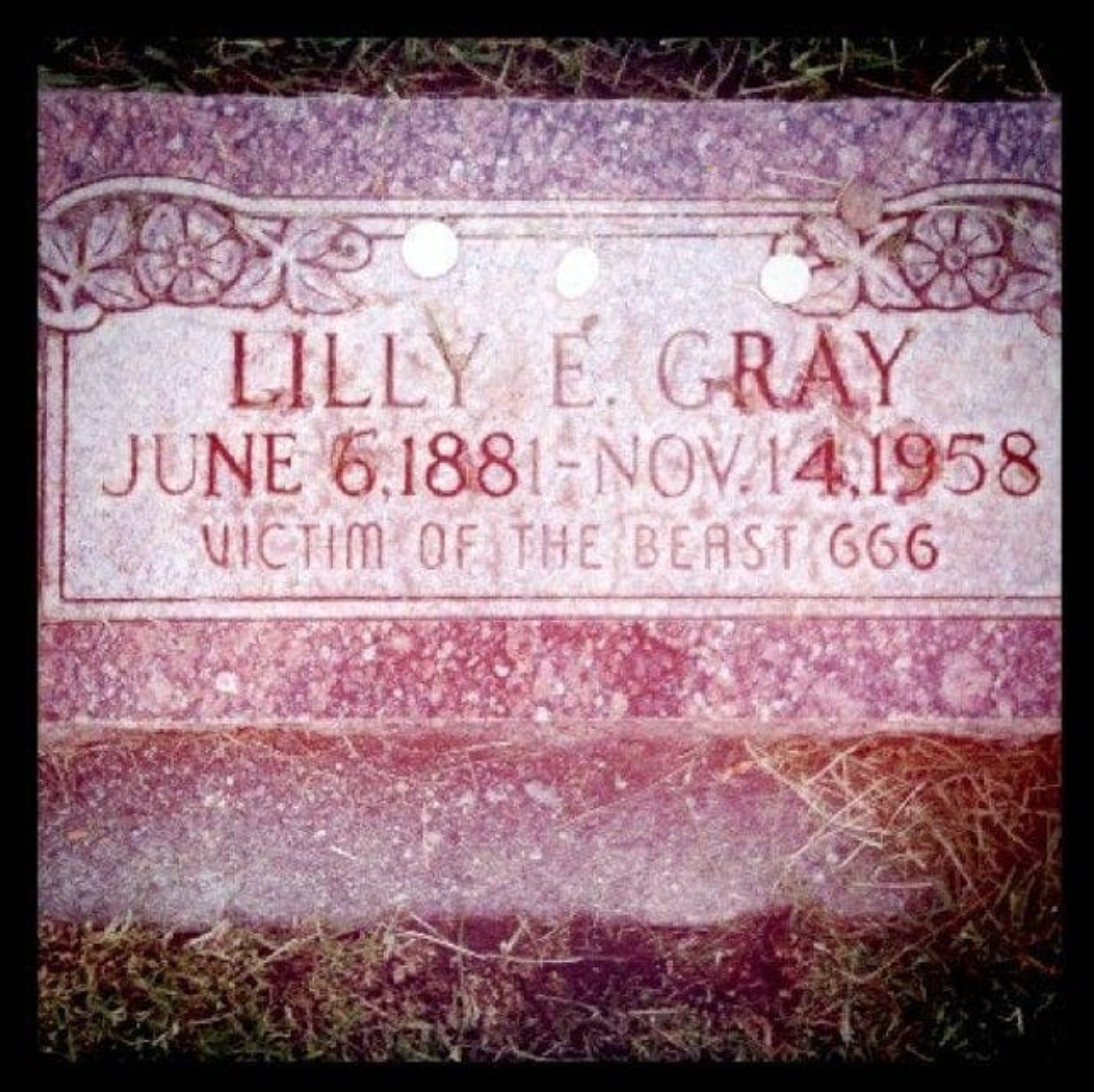 This tombstone is situated at the Salt Lake City cemetery. Though it says the deceased was a victim to a beast, the person actually died due to natural causes. The word ‘beast’ may be referring to her husband being imprisoned for being involved in a criminal activity in past. The areas near the Salt Lake City were witnessed to a lot of Aleister Crowley’s followers, who might have a role to play in Lilly Gray’s death. 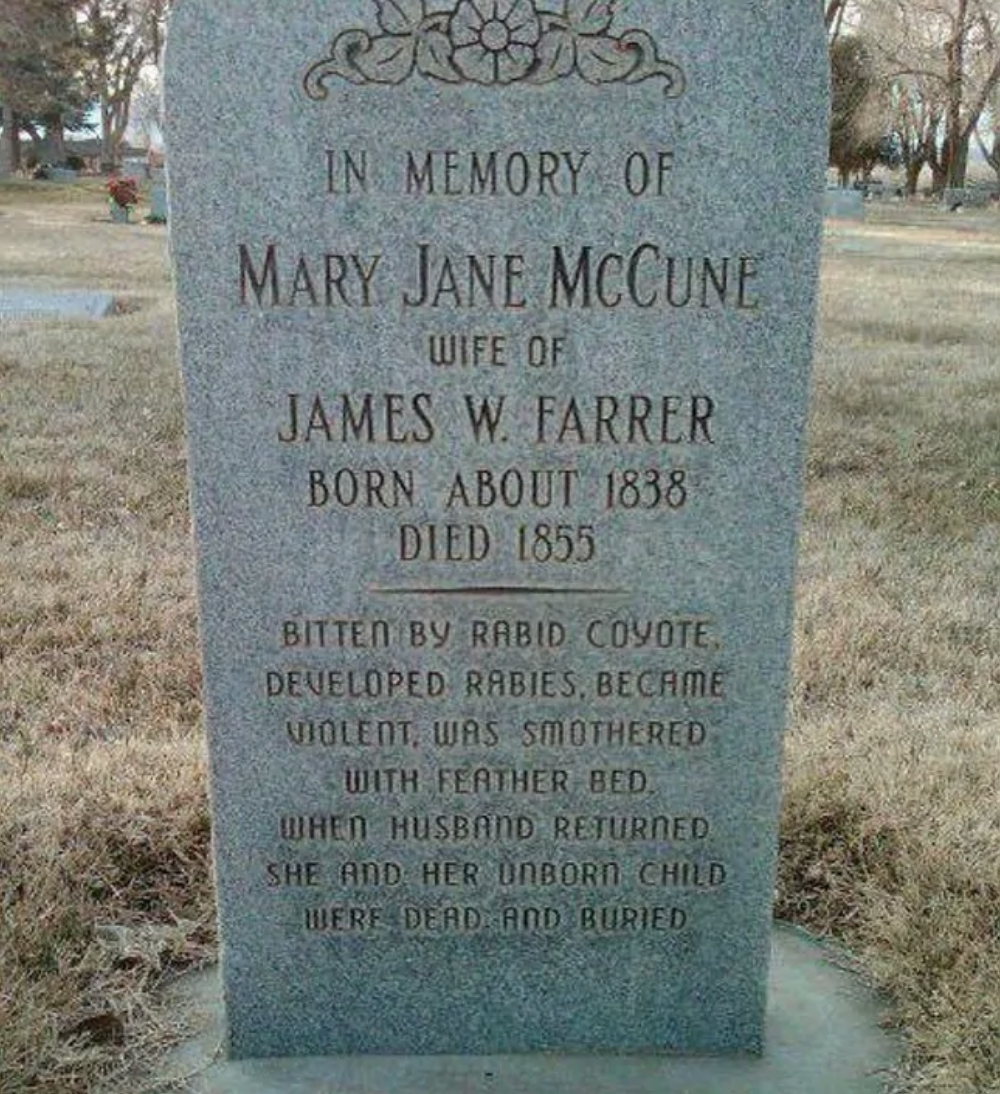 A very unfortunate attack by a coyote led to further unfortunate circumstances that caused Mary Jane’s death. She was diagnosed with rabies, which got worse, and she acted out violently. She was even restrained. Unfortunately,  she was pregnant with a child at that time and the unborn child died with her. Sadly, her husband was away for business only found out about her wife’s death once he later returned. 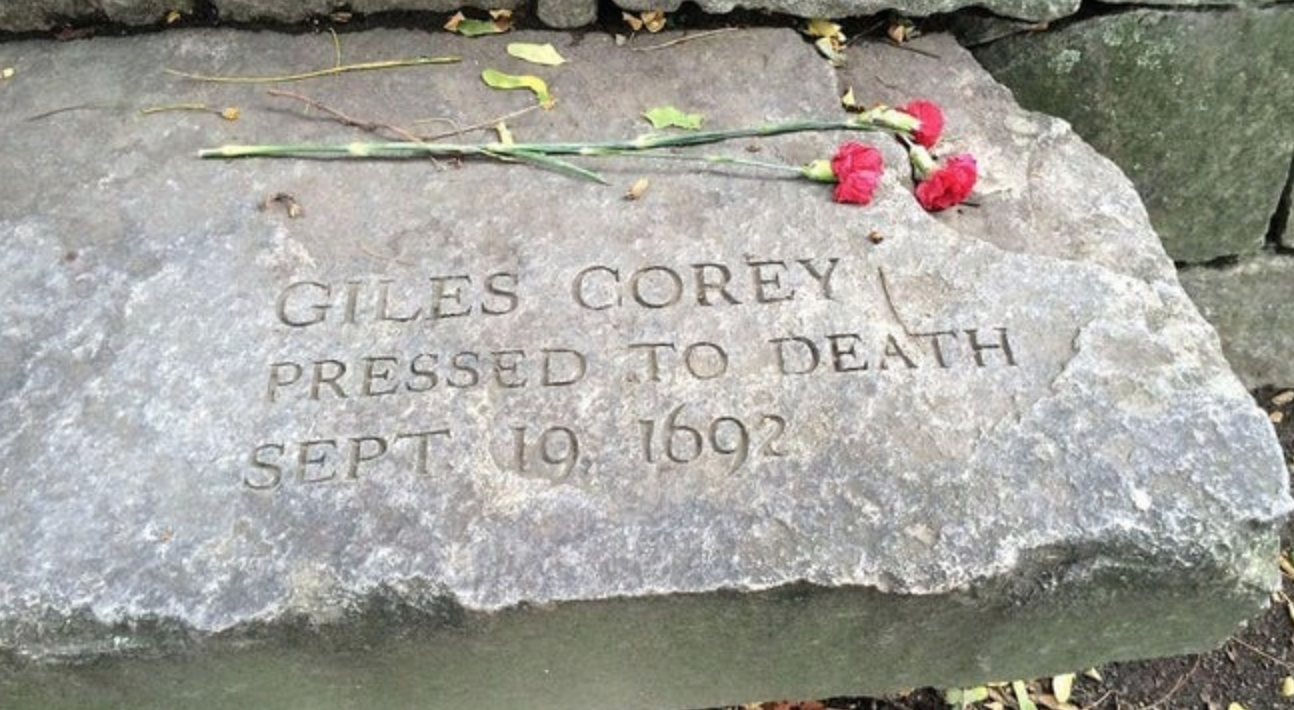 Being victim to the Salem witch trials in the early 1690’s, Giles Corey died a brutal death. He was being tortured to confess his involvement in black magic and devotion to evil. He body was piled with rocks above rocks in front of his neighbors. They were shouting for more rocks to be thrown on his body. He was tortured and these were the last words uttered from his mouth ‘’pressed to death’’. 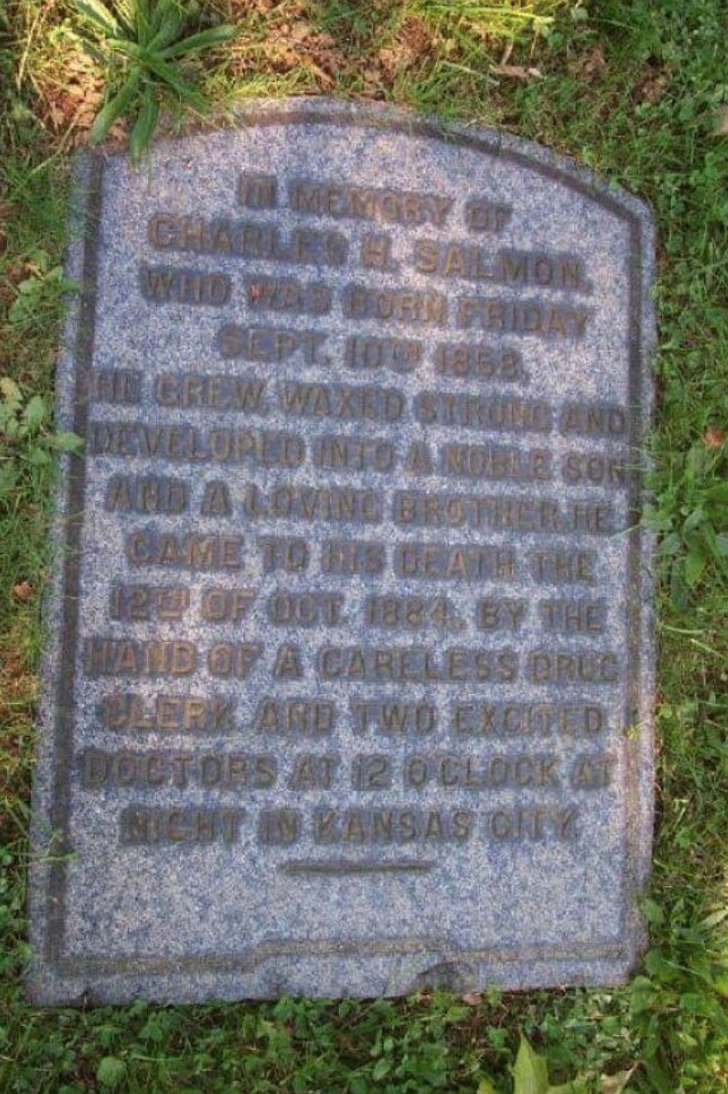 Charles Salmon fell victim to unjust overdosing and dishonest medical treatment. After taking abundance of regular medicine, quinine, to treat his cold temperature and still not feeling better, the doctors near him diagnosed him to have much serious problem. They gave him a lot morphine after which followed his death. He grew very lethargic after taking morphine and went unconscious. The authorities found that he, in fact, had not overdosed on quinine but morphine. 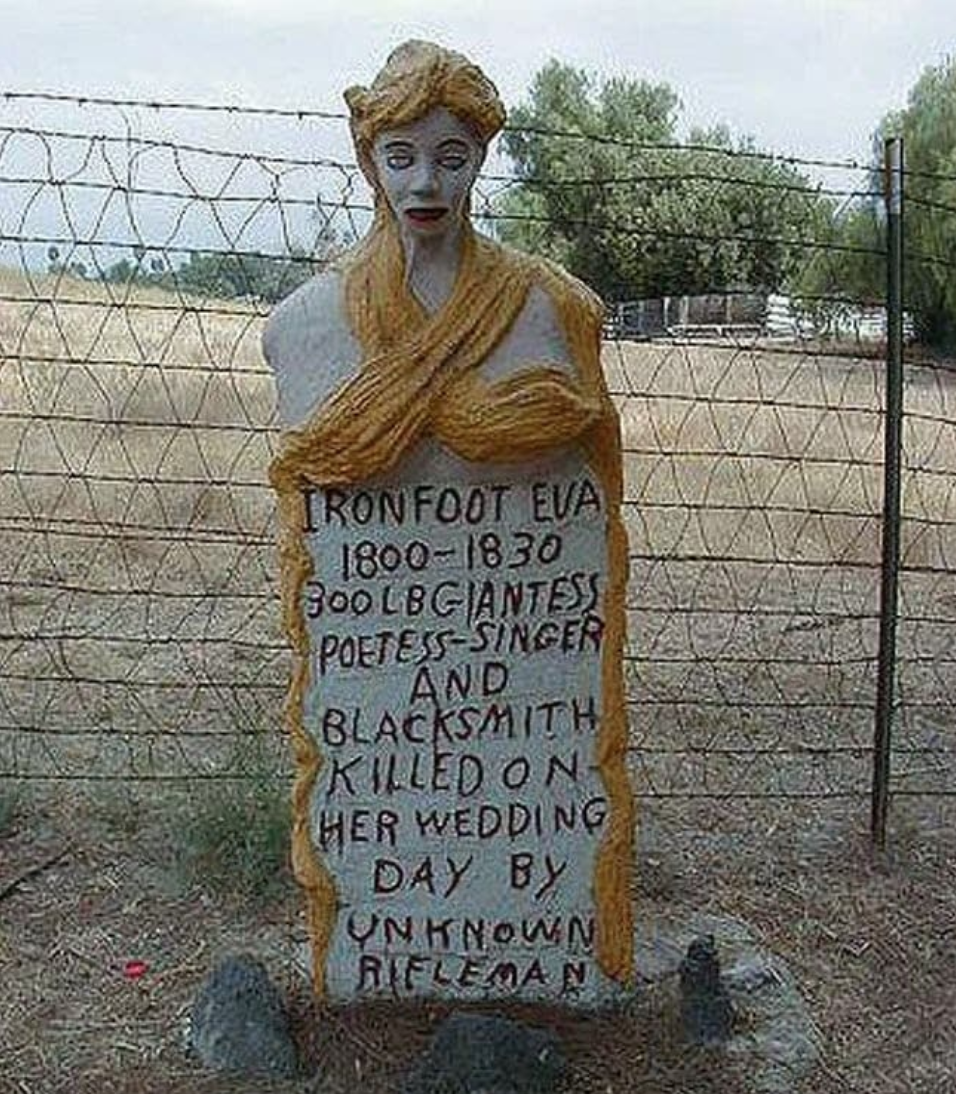 It is not certain and confirmed if this headstone actually belongs to the one mentioned in it or was it only built for the sake of art. It was built by John Ehn in Old Trapper’s lodge in California. It supposedly belongs to Ironfoot Eva, a sideshow performer. In case it is a true story, I hope we get to hear the entirety of it someday. 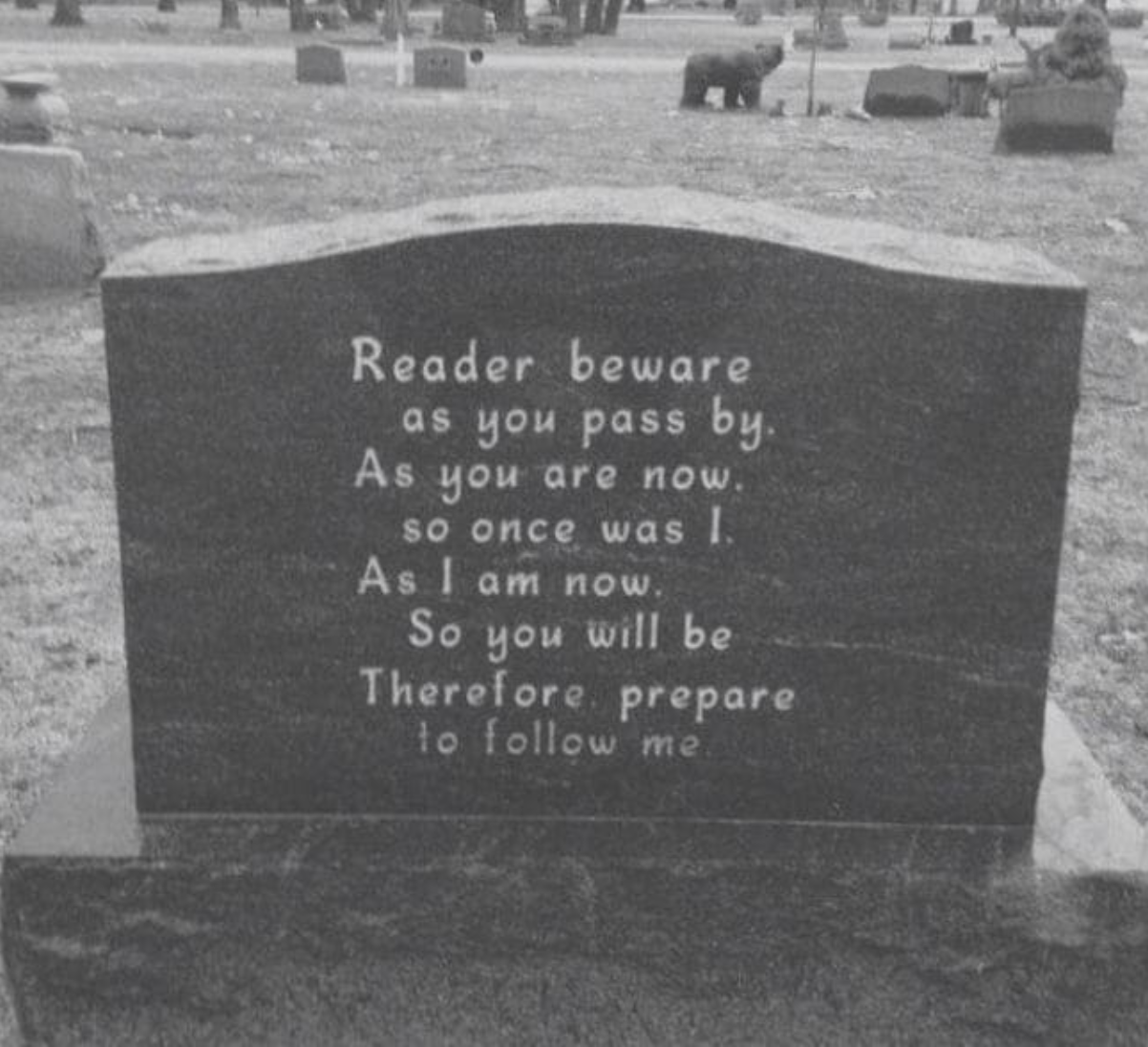 These words are not unique and can actually be spotted on many tombstones. Though it often implies to be a threat and have a eerie connotation, it actually serves to provide wisdom to us. It build upon the idea of our morality and simply explains how connected we all are despite having own conscious realities. This comes from an old poem from the 1600’s and can be mostly seen on Irish, English and Scottish tombstones. 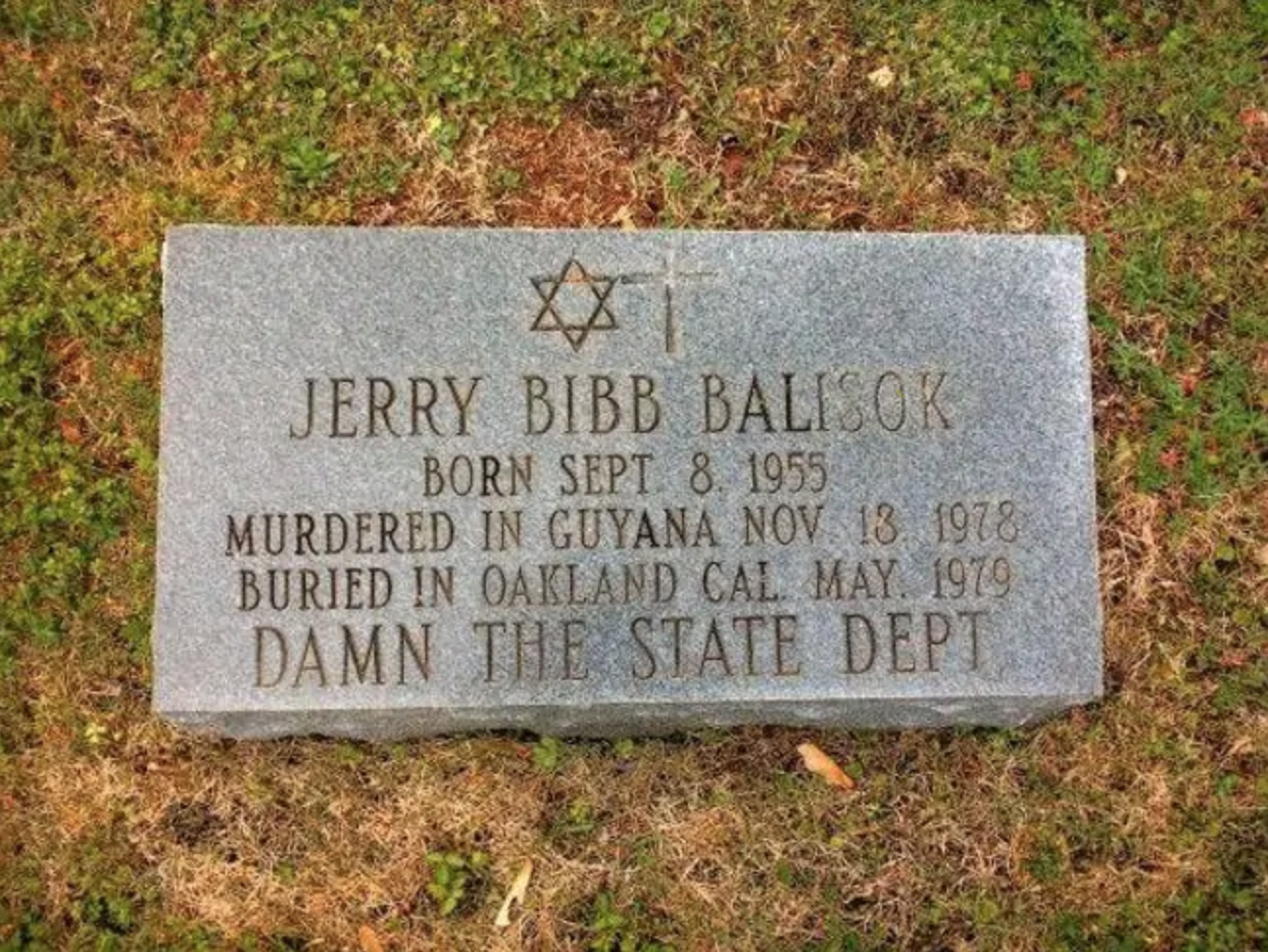 Jerry Bibb Balisok, a former professional wrestler and later a fugitive from the law, disappeared for six months after accused of being a fraud. During his disappearance, this tombstone was built.

Later, a fingerprint was run for Ricky A. Wetta who was arrested for murder in 1990. That fingerprint led to the discovery that the guy is actually Jerry Bibb Balisok. He currently resides in a prison serving jail time while this tombstone is a reminder of his disappearance for 6 months.