Spills, falls, and slips are not on the menu for sure but accidents do happen; It’s totally normal and fine though. Liquid spills contribute to most of the in-house accidents happening in a restaurant. The restaurant management is mostly kind enough to make a compensatory offer such as an extra meal or in case of clothing being ruined to bear the expense of dry cleaning.

The servers or the waitresses are humans too. They too can make mistakes, going easy on them boosts their confidence and increases the chance of making fewer errors in the future. Being hard on them might urge them to make another spill next time you come, but this time on purpose… *evil laugh*

In our today’s AITA thread, we came across a similar accident in which a waitress accidentally spilled wine onto a customer while he was in his finest suit on a boy’s evening chilling around at a restaurant, he chose not to tip the waitress as a punishment. However, he was bashed by the readers and we couldn’t agree more with the commenters.

1. This guy thinks he can make himself feel better about it through his AITA thread. 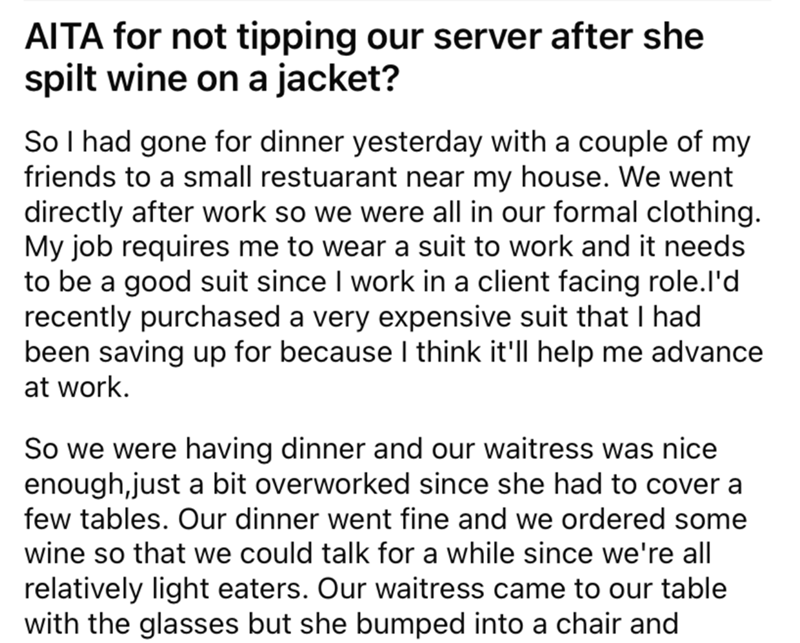 The restaurant management was to be held responsible for giving longer shifts to the poor girl, not she herself. Have a heart…

2.  Man, you could have found a dry cleaner better than your present one, so that you didn’t have to undergo so much of the anxiety… 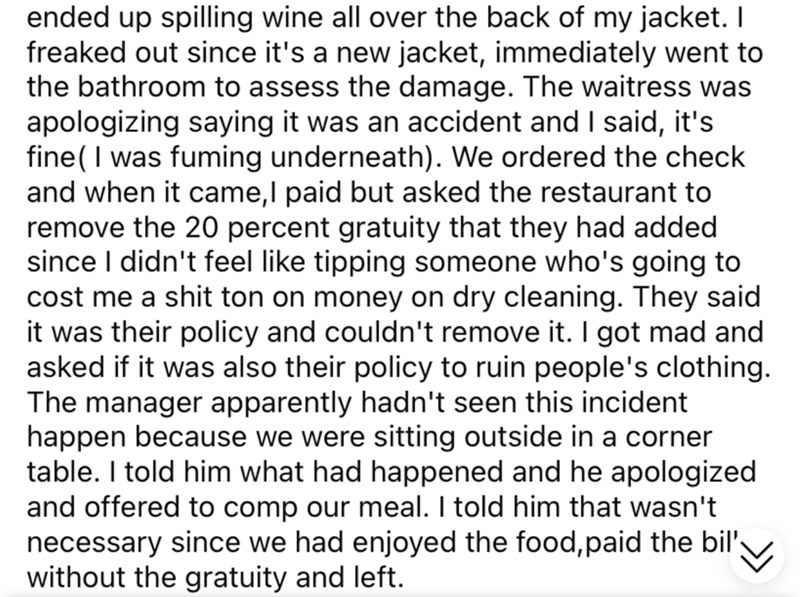 3. Well, they aren’t wrong, you did get a bit overdramatic it’s just liquid which will eventually get washed off and the stain wouldn’t stay either. Alcohol dries off sooner than ever…

Pro tip: Put some salt over the spill and let it stay for the night, the salt will suck out every bit of the moisture and the stain would come off easily.

Now let’s go-ahead and take a look at the reactions of people.

Yes and that explains why it wasn’t the fault of waitress. She didn’t deserve it.

Totally!! Shifts and work management are to be done by the ones who have the hold over the management…

It’s about their bread and butter 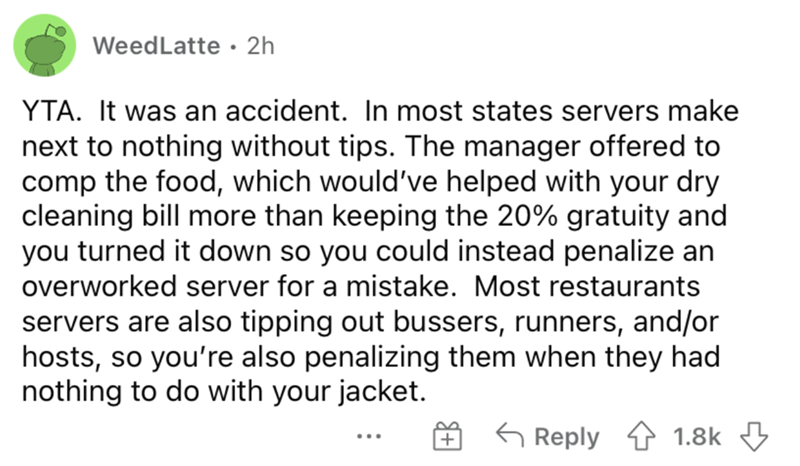 The tip might have been a treat for her to support her family just by an extra inch, or could have enabled her to get a birthday gift for her little siblings or she could have pampered herself on a holiday 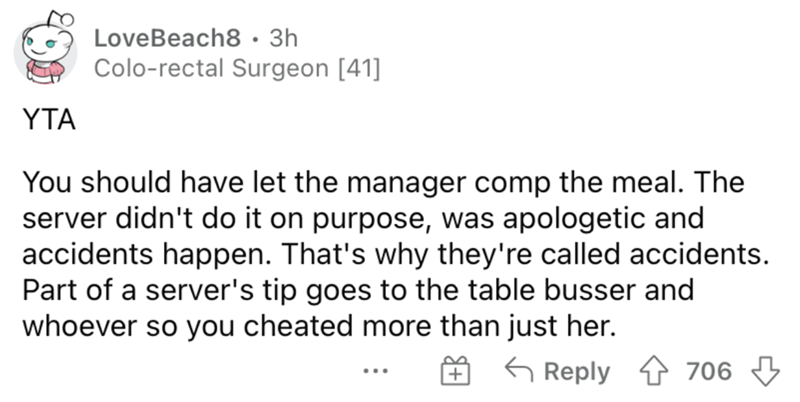 People aren’t taking it easy on him, Girl you’ve got public support…

You said it’s fine well you got act fine too, then 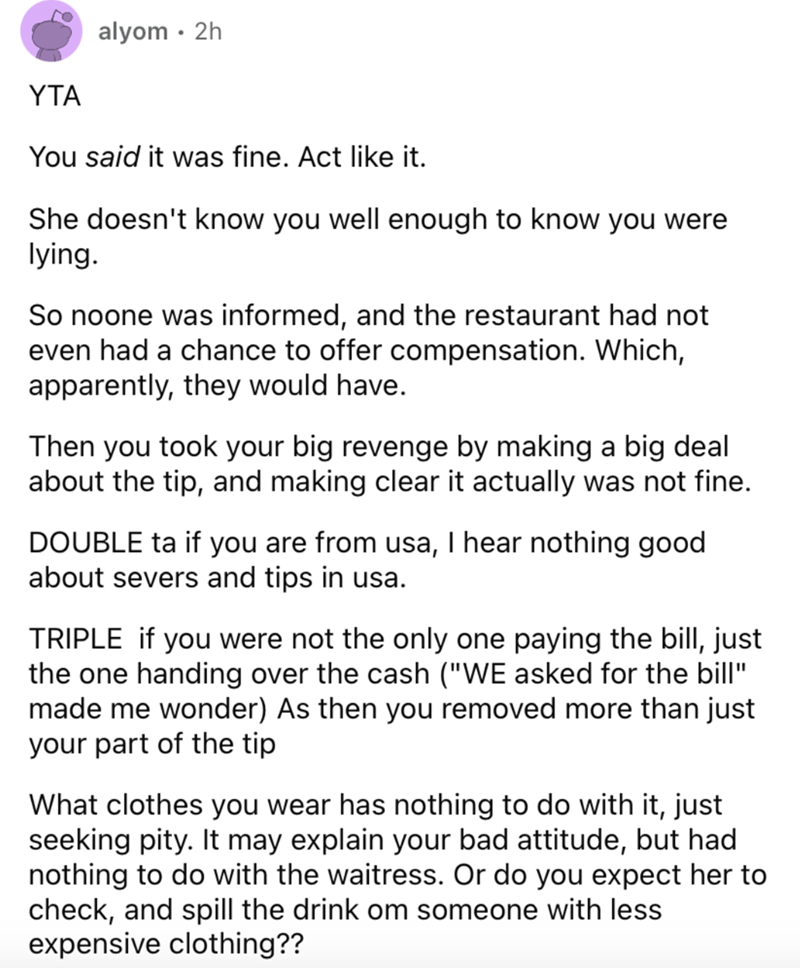 Quite of an explanation of why YTA

You asked for it!

You could have taken the offer to bring down your temper

You could have taken the complimentary meal and given it to the waitress if you didn’t choose to tip, at least it could have saved her an extra expense for the day…

Accident is an accident

Somebody here has your side

You shouldn’t have been the heartbreaker

I hope not another of your finest jacket gets ruined, you should make it up to her!

Another vote for NTA

But this doesn’t justify not tipping the lower staff, human errors do occur…

It was an accident overall…

We’ve got mixed opinions here but more YTAs and it makes sense. what do you have to say about this? let us know in the comment box below. Also, what would you do if you ever come across a similar situation?