Tattoos require a lot of aftercare.

I am not a tattoo expert myself but I do have a few on my body and I know that they require a lot of work for their upkeep. Just because you have the money to get a tattoo doesn’t mean you should get one. You can easily get an infection and that means your tattoo would never heal right making it so the colours in the tattoo are all messed up. And usually, tattoo parlours tell you all about the aftercare beforehand and some even give you an instructions manual.

However, that doesn’t mean everyone listens to it. Some people think they know better than the actual tattoo artist. And that is exactly what happened in this instant. The tattoo artist told their customer what they should have done. But they didn’t and the result was as you would expect. But you can read all about the story by scrolling below. Not only that but the customer was also rude.

Honestly, every tattoo will get lighter as it heals. 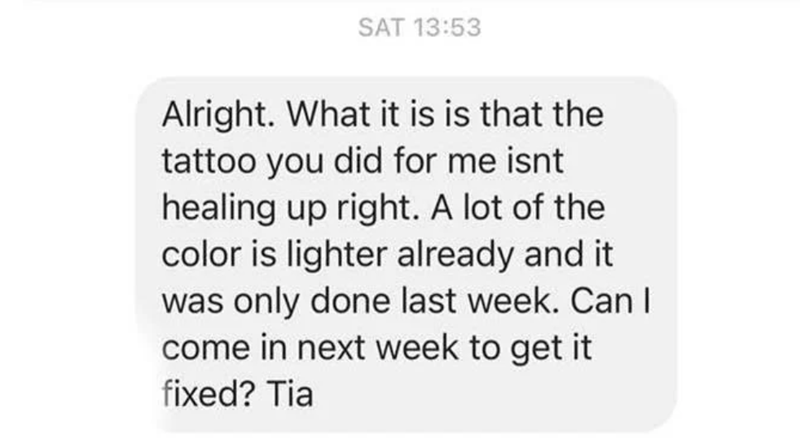 However, it can also mean that the tattoo artist didn’t pack the colours as much as they could. 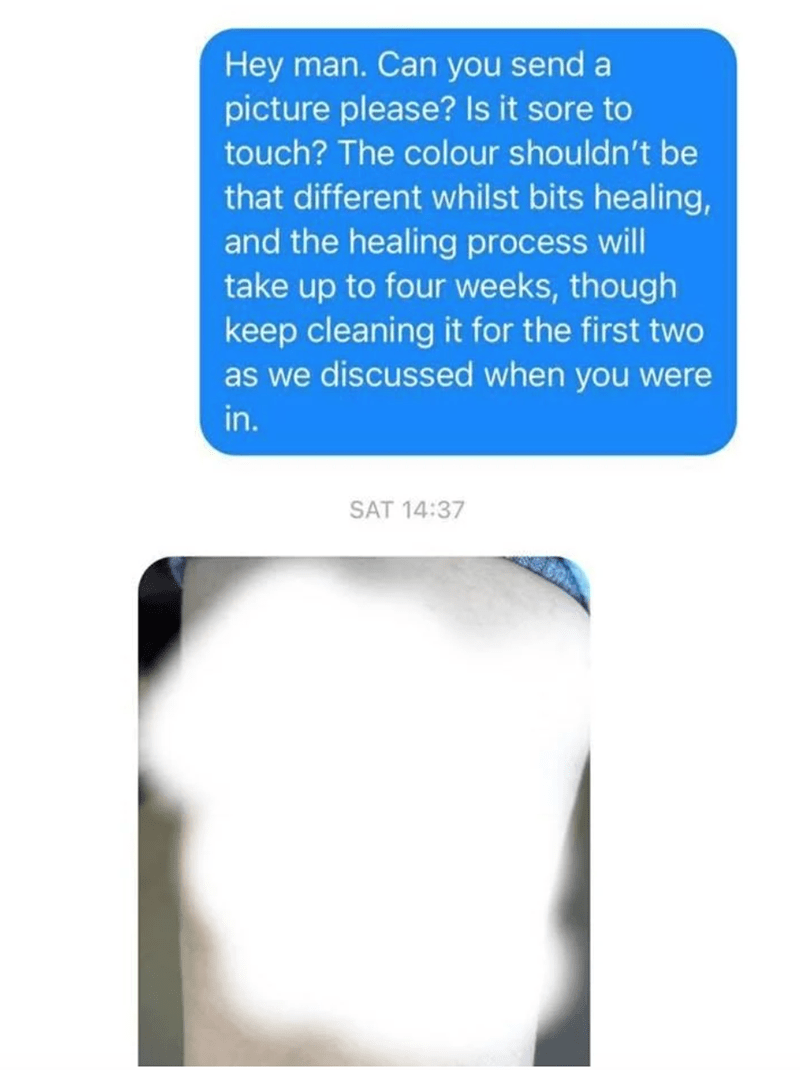 The tattoo artist asked whether they used the fragrance-free lotion but they didn’t answer the simple question. 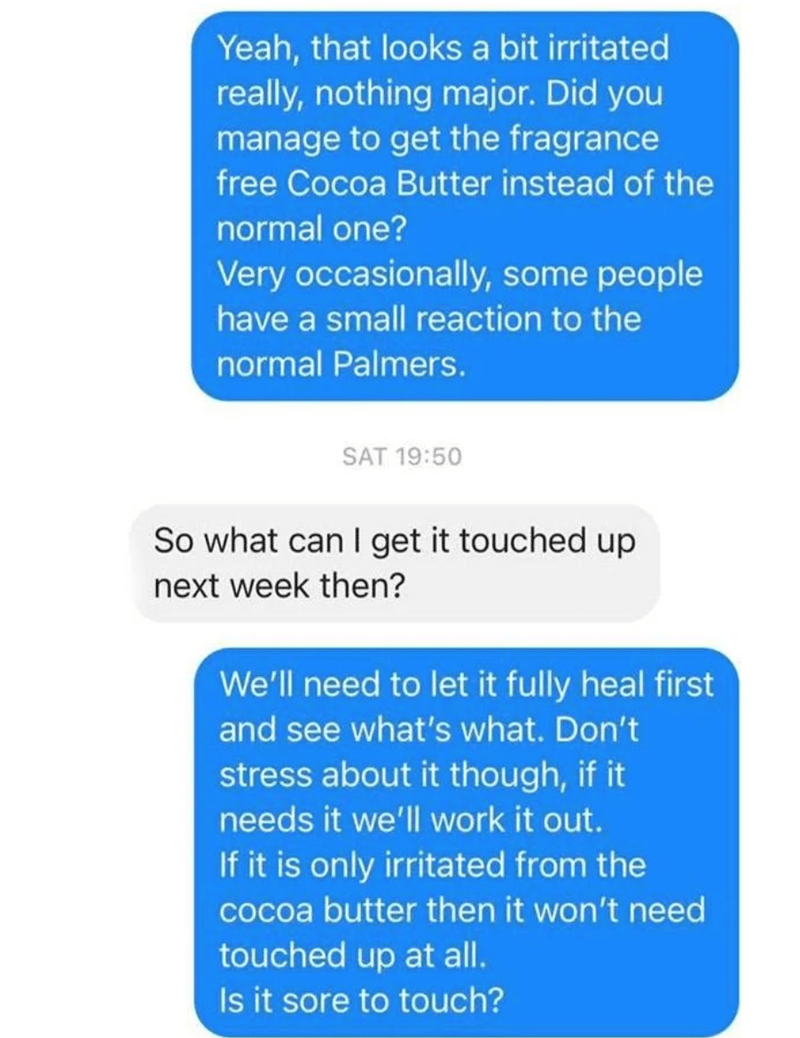 Everyone knows that tattooing over a currently healing tattoo is not a good idea. 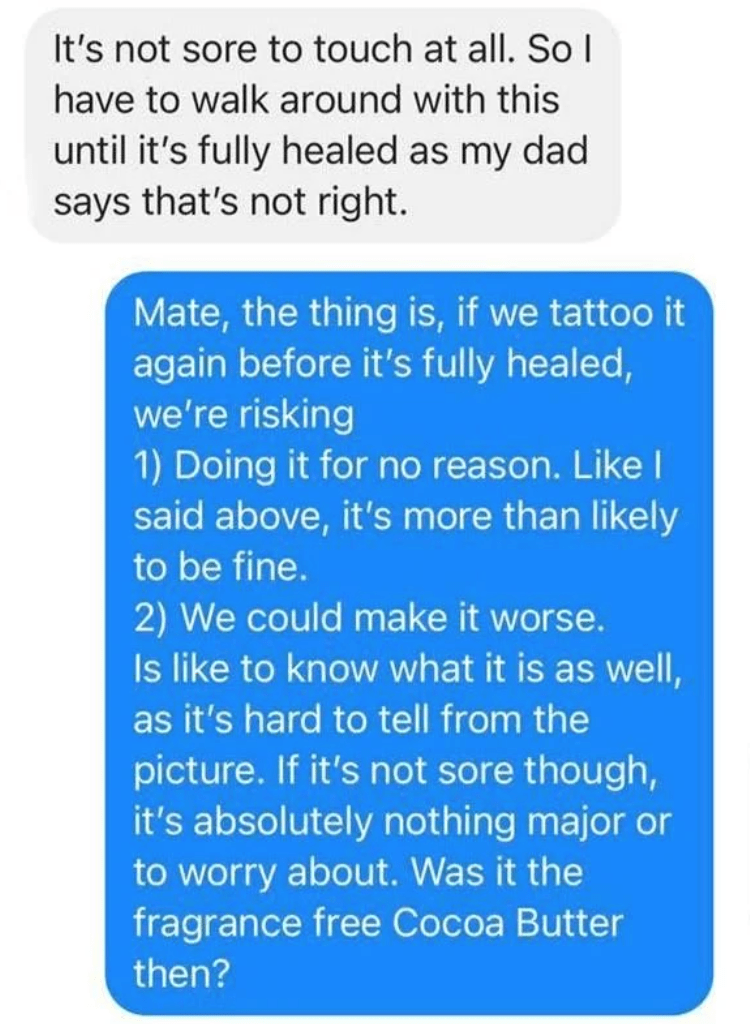 This is from last weekend, and why we’ve been banging on about aftercare all week. We can only do so much after you’ve left the studio… But defo go with what your dad says, even though he’s not been tattooed since he got a tribal skull in the 90’s.

Not only will it hurt quite a lot but one can also get a severe infection because of that. 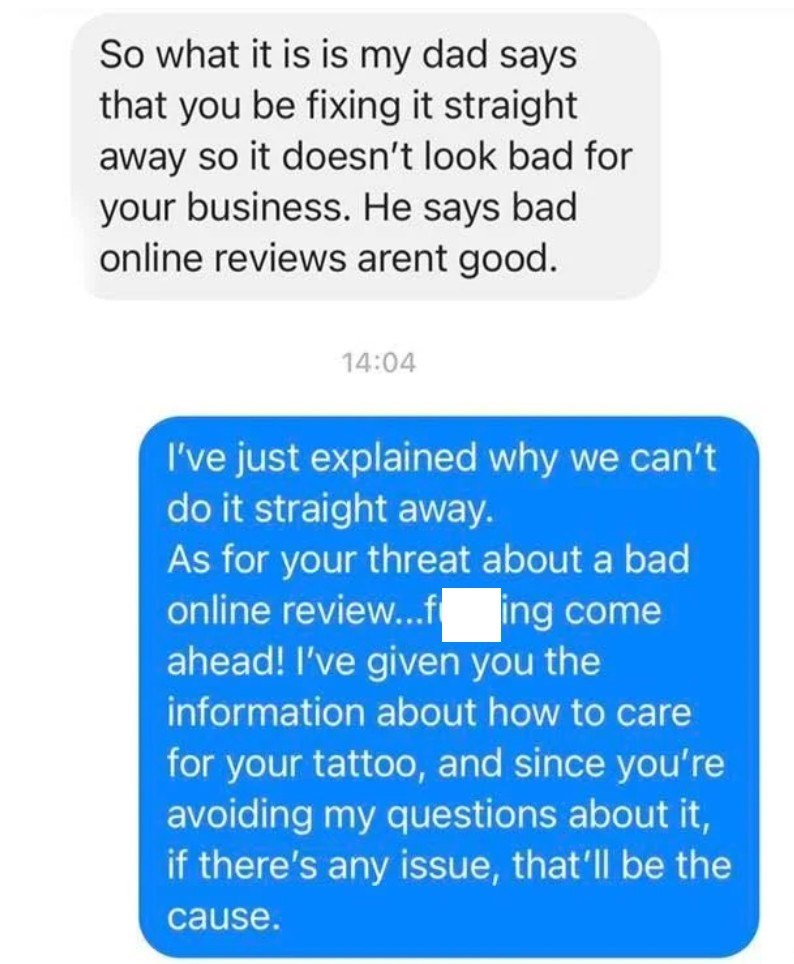 And this is when the real issue came to light. They hadn’t listened to their tattoo artist. 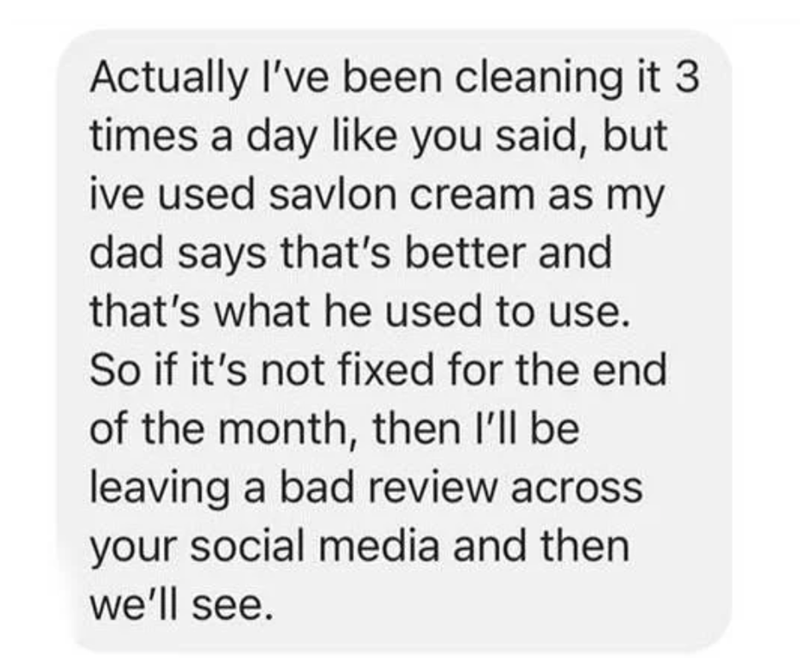 As you can imagine, the tattoo artist was angry at the customer as one would be. 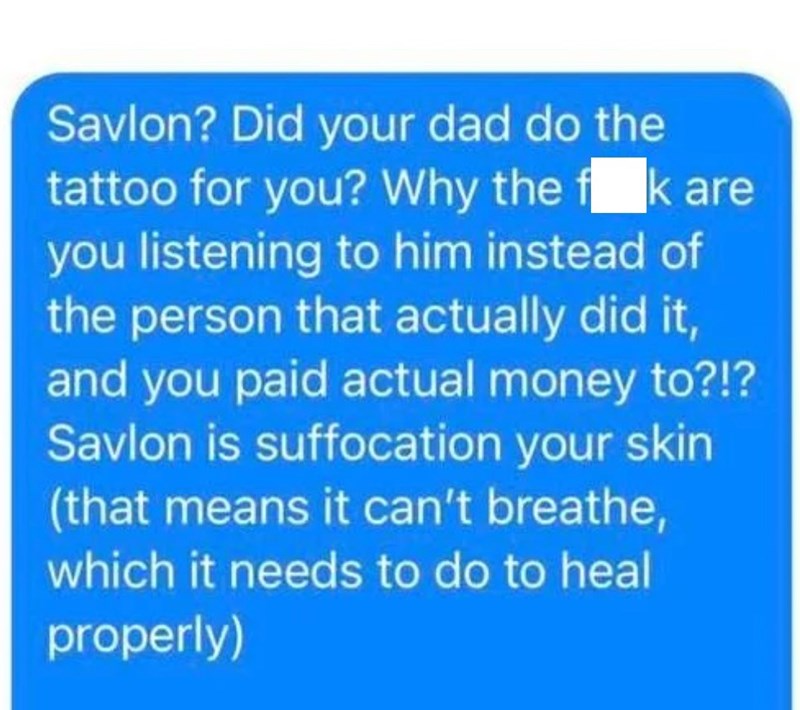 The customer should know better than to do this sort of thing. 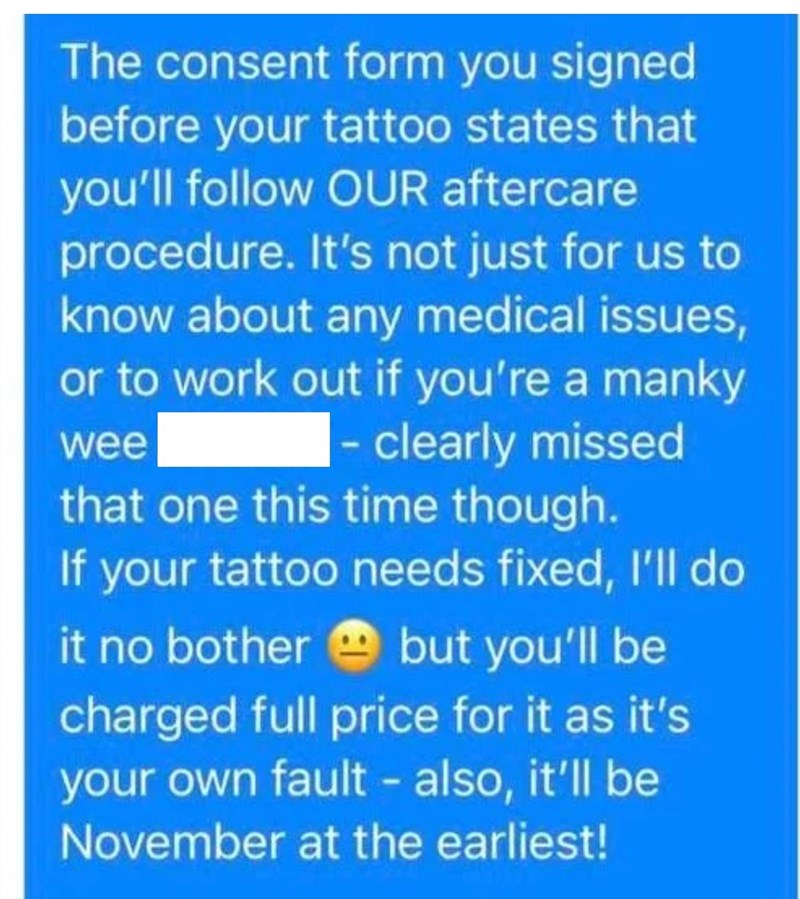 This tattoo studio actually has quite good reviews and they have 4.8 stars out of 5 so I don’t think one bad review would have done much. However, behaviour like this is simply bratty and no one should do things like this. From what I could see all the people in the studio are very nice and take care of their customers. However, it falls on the customer to take care of the tattoo properly and follow what their artist has told them to a T.

And threatening someone with a bad review is just the cherry on the cake. 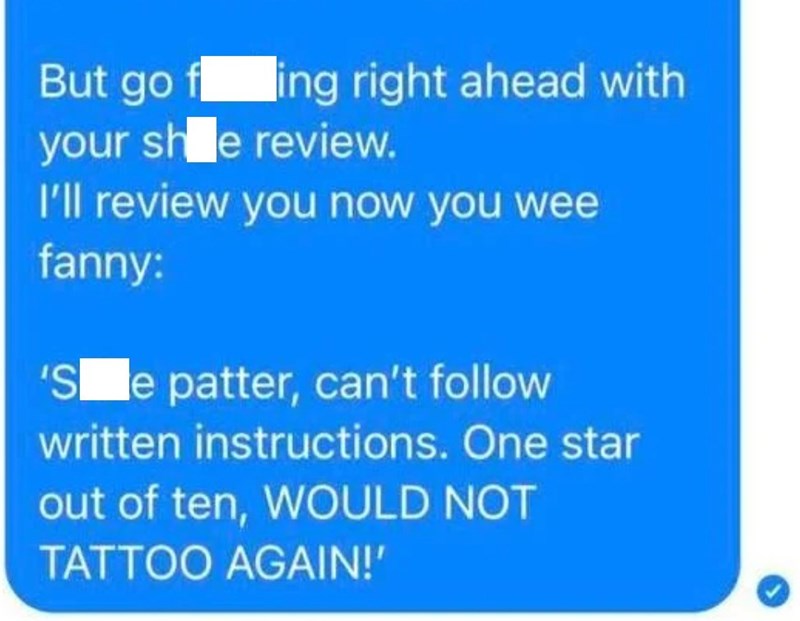 What would you do if someone threatened you with a negative review even though it wasn’t your fault? Comment down below and let us know.