I can’t believe the sexism this father exudes.

Well, I shouldn’t say that since I have heard worse stories of sexism but when even your parents differentiate their kids based on gender, you know everything is messed up. While I do understand asking your kids to do chores is a healthy part of growing up. After all, when they venture forth to live as adults, nobody is going to coddle them.

However, that doesn’t mean you can put all the work on your daughter just because you have to pay for her sanitary products. Honestly, pads aren’t even that expensive! And the amount of work he has been asking her to do deserves a lot more money if we go by according to his logic. And while all of this is going on, his son doesn’t have to do as much as wash a few dishes? I mean I don’t get angry often but this has me bewildered.

It is only the start but the father is already spouting nonsense to cover his a**. 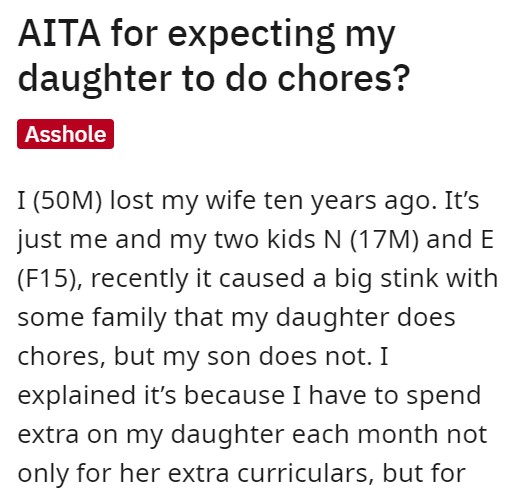 Someone explain to me how this adds up mathematically. 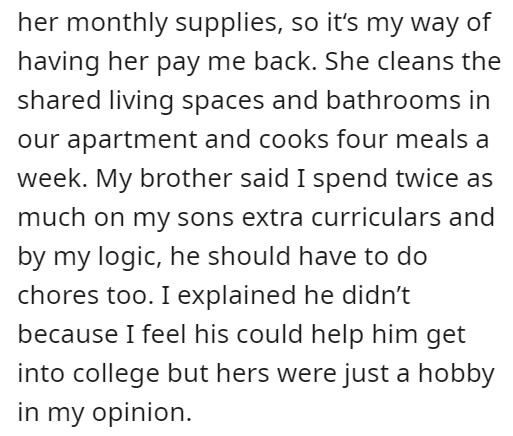 So she can’t act ‘bratty’ when she is a teenager but you are allowed to? 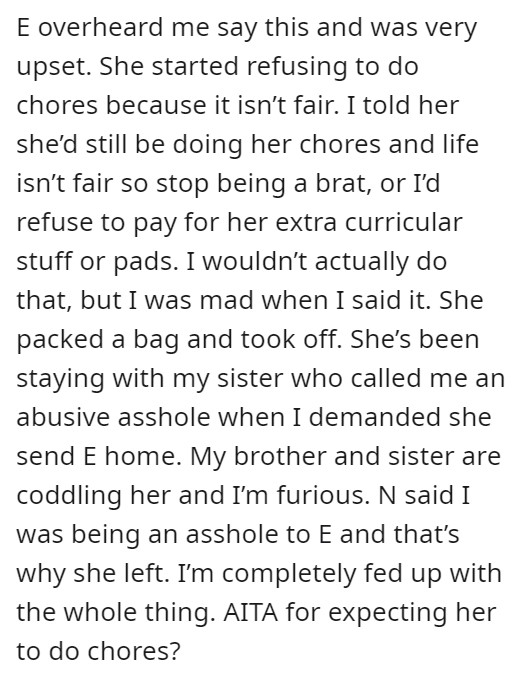 YTA. You are the biggest asshole I’ve seen here. That’s sexism. And saying you wouldn’t buy her pads?! That’s a BASIC FUCKING RIGHT. She goes through something that sucks ass every month and you threatened to take away the things she needs? You have no idea what she goes through.

100 dollars says if your precious son wanted money to buy condoms it would be a different story. And to make her do all the chores because they’re “hobbies”. Bullshit. Absolutely. Bullshit. You just don’t value what she does so you look down on her for it. You’re a sexist asshole and I hope your daughter stays away. She’s not being coddled, she’s probably finally being treated equally.

Edit to add: I did dance and choir. Girls who do dance and music have a way higher chance at art scholarships than the one in a million chance your son has. OP. You are an asshole. And you do deserve to have CPS called on your for trying to deny her basic needs. –wtfamidoingheredude

My only question is what aren’t you doing wrong when it comes to raising your daughter? 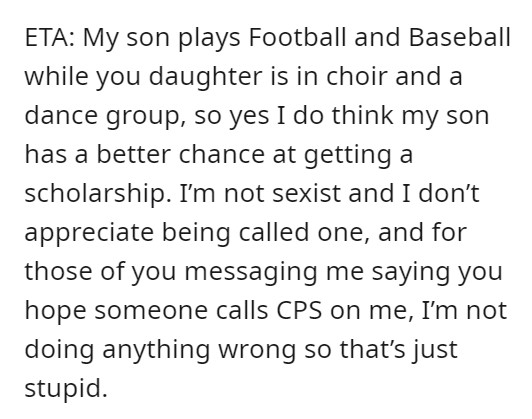 You have to buy her feminine hygiene products. That’s not optional.

If you are paying for extracurricular activities for your son too then he has to have chores as well.

Treating them differently is sexist and you are a horrible parent for doing that. –loupgarouscientist

Right because real women know how to stop periods at will. 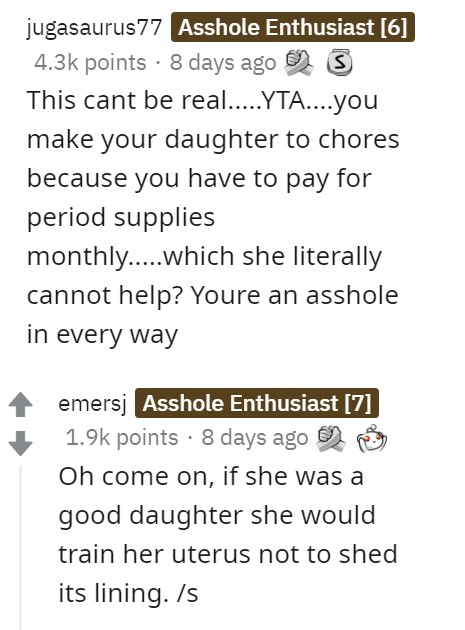 He is worse than pathetic. He doesn’t deserve a daughter. 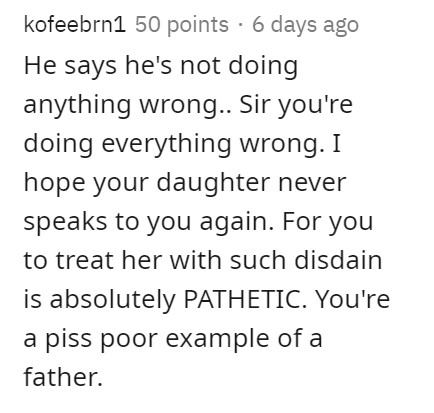 Nobody would want him as a father. 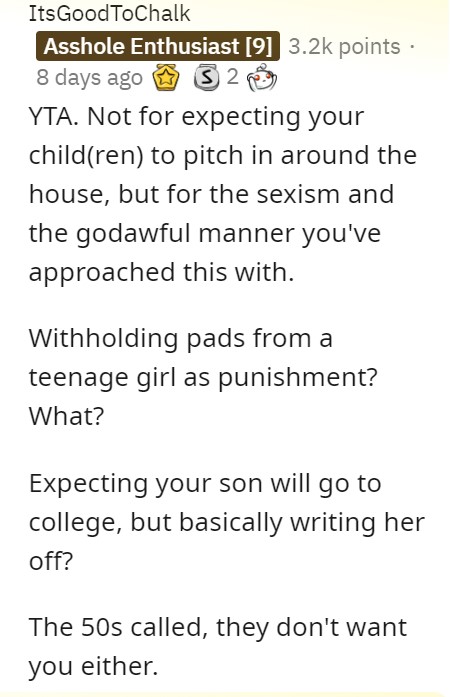 It’s not even about gender. It’s basic human rights. 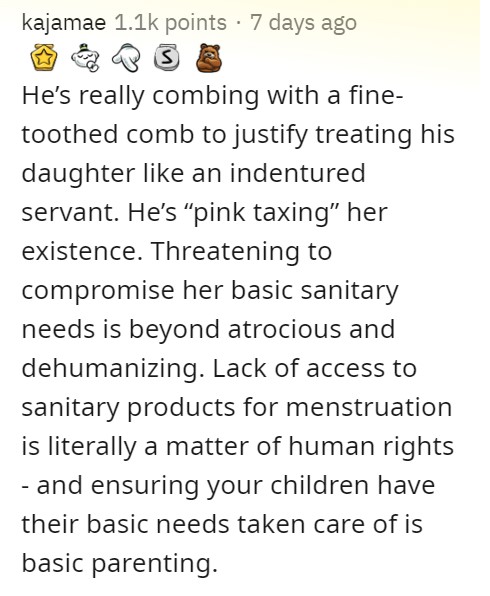 So is he going to pay her then? 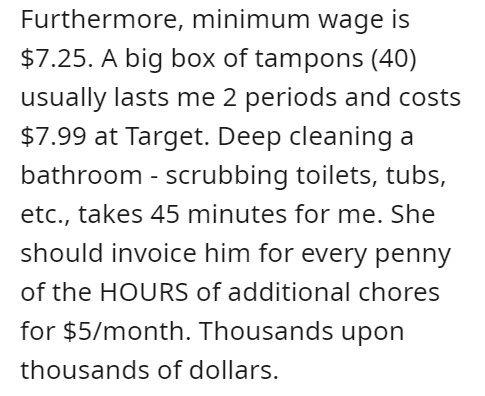 Honestly, both of their passions and hobbies deserve equal attention and money. 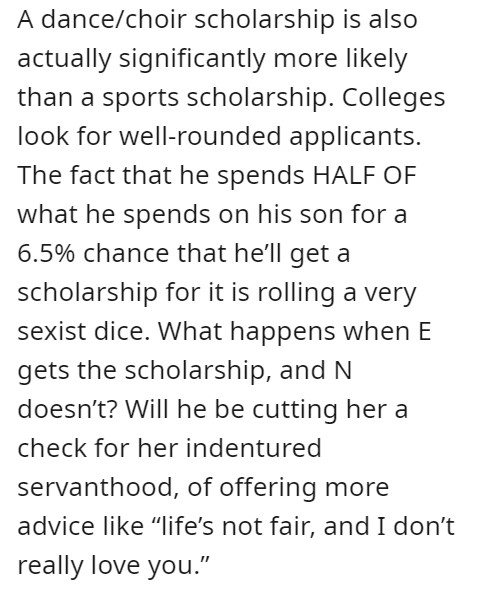 Exactly, he isn’t being a great father to his son either. 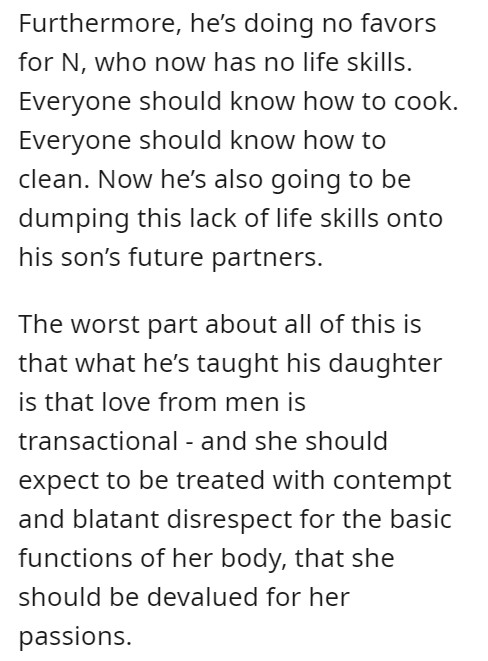 I have a single father and I can never imagine him doing something like this. 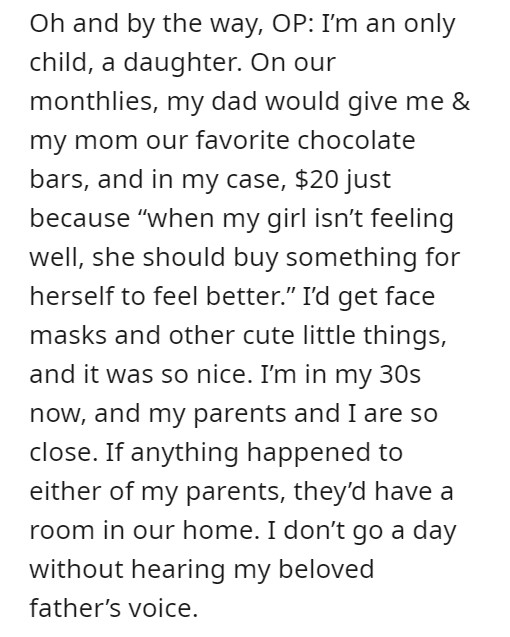 You reap what you sow after all. 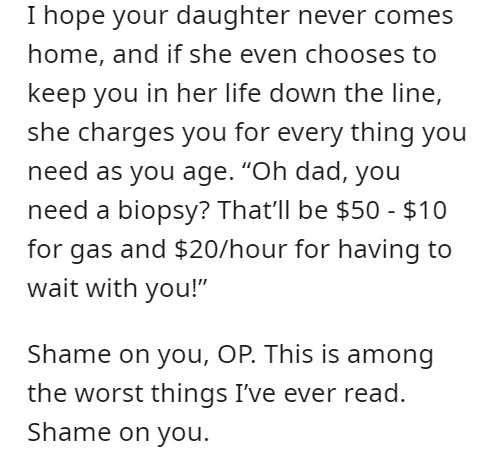 Doing chores is fine as long as both of them do it equally. 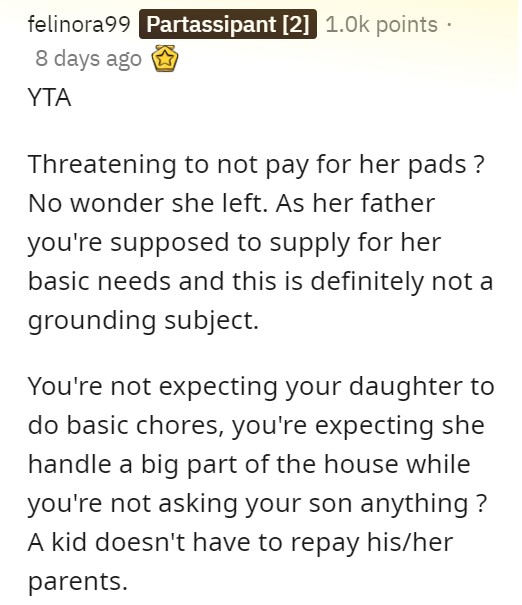 This way your son won’t have a great upbringing either.

I hope it works out for the girl in the long run. 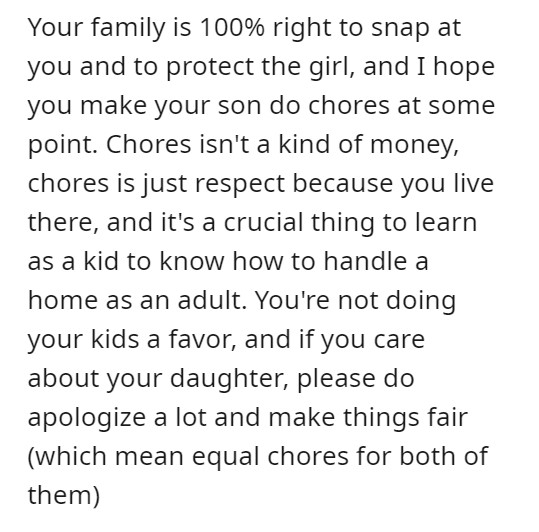 Do you think it is better the daughter stay away or does he deserve a second chance? Comment down below and let us know.