Families can be complicated.

Even though you always want it to work out between your family, things aren’t always what they seem. And let’s not even delve into the mess families become when it is someone’s wedding. It seems weddings are a magnet for all the drama and arguments in the world. However, I do not blame this daughter for not inviting her father’s wife.

You might think that is a weird and rude thing for her to do but the man abandoned her when she was a kid. Although things aren’t as simple as they seem because he did continue to pay for child support and everything else. He had made it clear quite early in the relationship that he didn’t want kids so we can’t really blame him for that.

You can form your own opinion on whether what this man did was alright or not by scrolling below.

I mean it is a valid question to ask on Reddit. 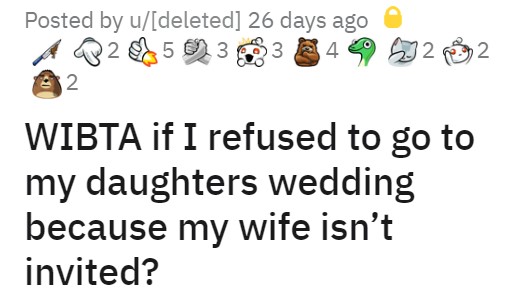 She wasn’t completely wrong, he didn’t have any say in whether his kid would be born. 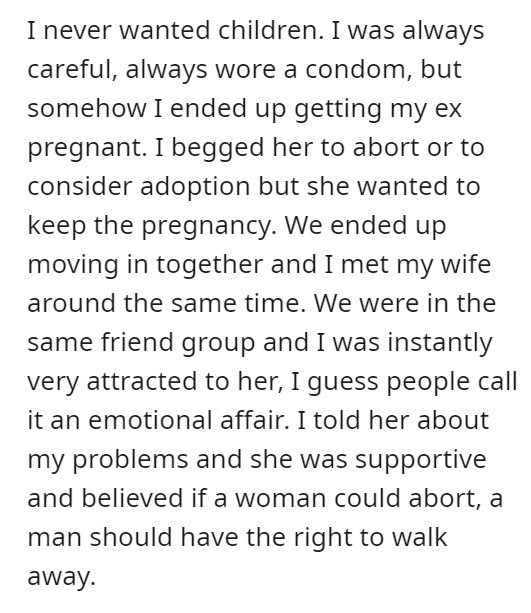 I can understand that some people just don’t want to have kids and that is completely okay. 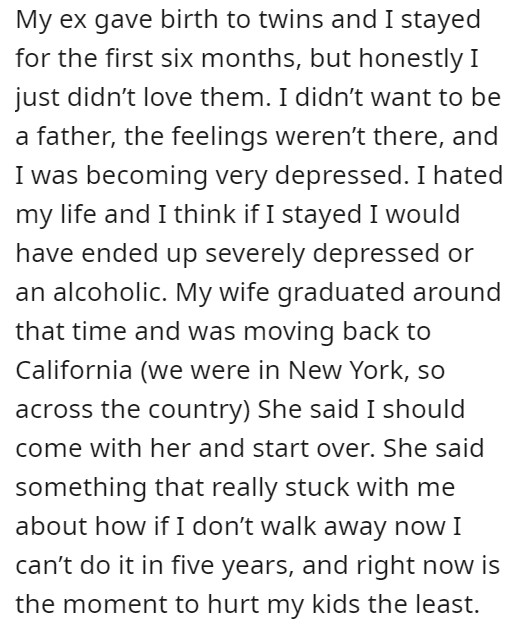 In retrospect, he did abandon his children in a way and they don’t owe him anything. 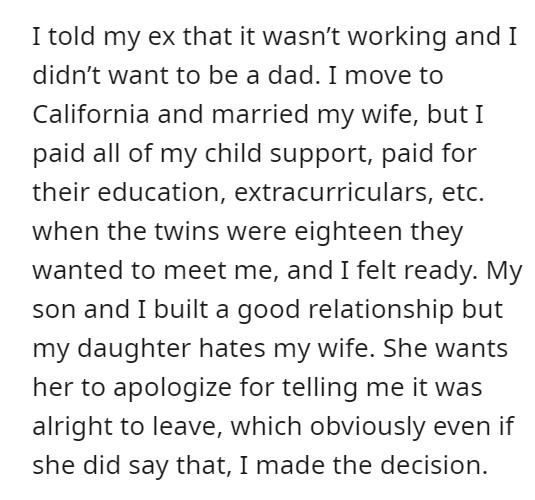 Well, this certainly puts things in perspective, he did pay for her wedding. 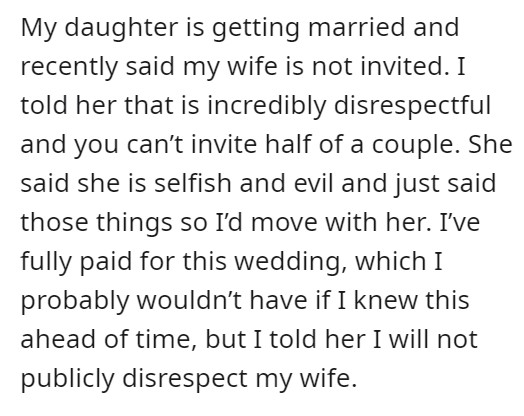 OK but his daughter also sucks for taking all his money for the wedding and then not inviting his wife. Her asshole behavior is not absolved. ESH. The only person who doesn’t suck here is the son. –TPoppaPuff

If she didn’t want to invite his wife, she shouldn’t have accepted his money. 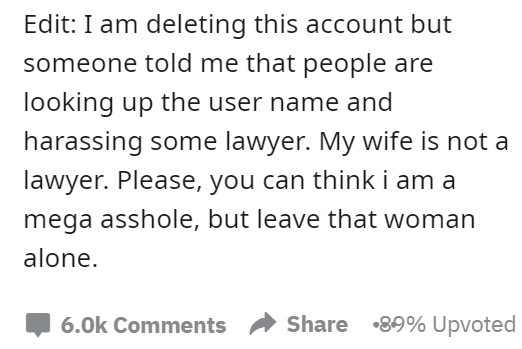 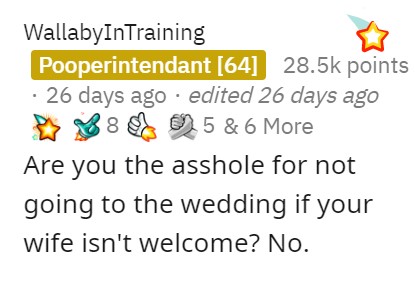 Maybe she would have changed her mind if she knew his wife enough. 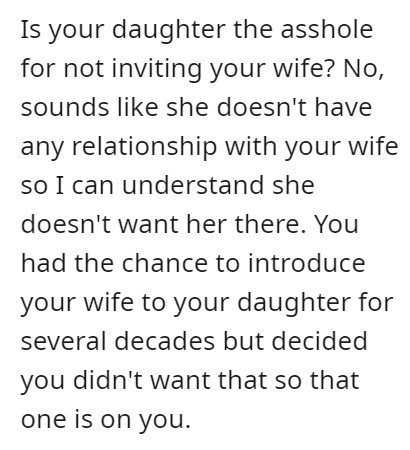 At the end of the day, he has no right to what she doesn’t or doesn’t do. 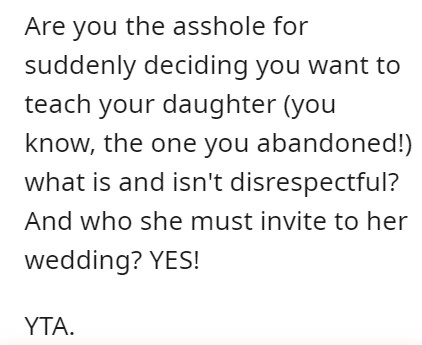 YTA for pretending to get sucked into an a**-backward fairytale spin. If you as a man don’t want kids, you get a vasectomy. You don’t gamble and then ask someone to get a medical procedure they don’t want to clean up for you. Cool, you did your child support part but the views YOU actually hold and want to hide behind your wife as being the influence should be the main reason why you don’t go. Then you won’t have to drag the human shield you want to bring with you to your daughter’s wedding.

That’s the main reason why you don’t go. The other reason why YTA is of course she blames your wife – that’s what you wanted when you made sure your daughter knows YOUR opinion was first verbalized by your wife. But it’s definitely your opinion and it’s a sucky one. Since that’s what’s up, you should just not go. I promise if you finally admit to your daughter that no matter what your wife said, you agreed with it, she won’t want you there either. –VinnyVincinny

She isn’t dealing with this situation like an adult either. 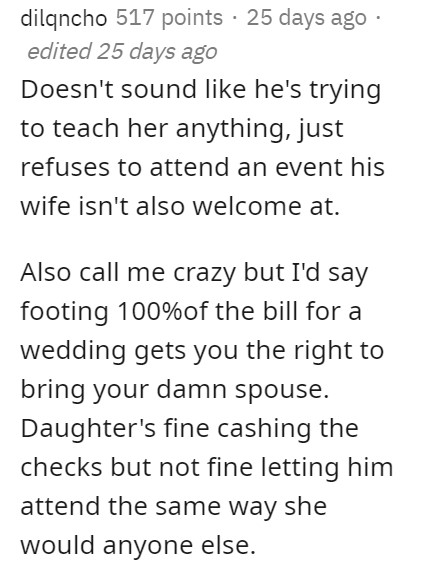 Exactly, even if it wasn’t her father, it would have been extremely rude. 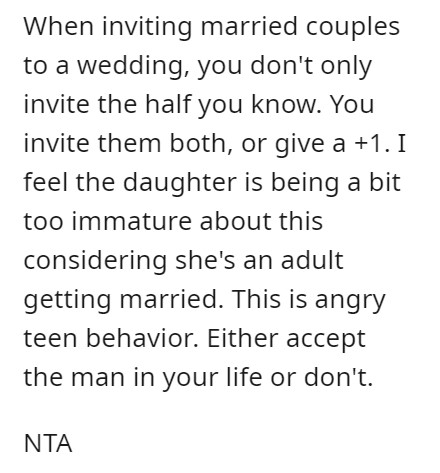 Both of them made their own choice and they get to live with it as well. 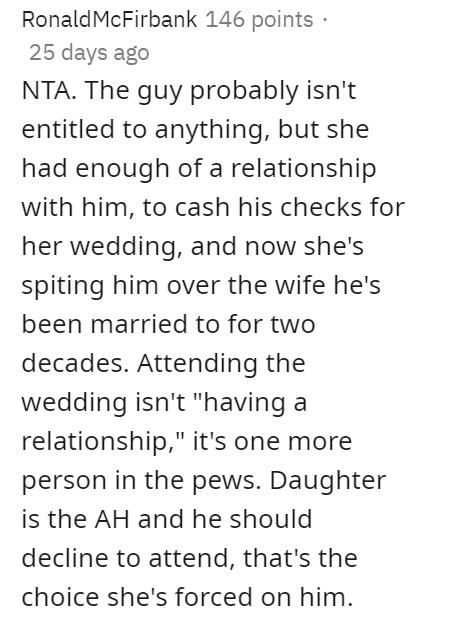 What is your opinion on this? Comment down below and let us know. Don’t forget to share so others can join in as well.