As children, I feel it is an obligation upon us to do anything in our power to provide our parents with a comfortable and smoothly flowing life when we turn into adults and they grow older. After there is so much that they do for us in order to groom us and educate us into being what we are today. And if you think about it, this sort of works the same way if you take pet animals into consideration as well. Being a pet owner, you would do absolutely anything for your animal to ensure that they are happy, healthy, and doing well in life. After all, that animal also does whatever it can in its power to keep its owner happy and away from stress.

Today’s story is about a Redditor who found herself in the middle of the two situations that we just mentioned. She was sort of stuck in an uncomfortable situation where she was asked to provide funds for her mother’s surgery. That and she also had to pay for the medical expenses of her doggo. We won’t tell you her decision yet but let’s just say a lot of family drama took place based on that decision. So OP decided to take the matter to the AITA courts of Reddit and posed the question to the community itself. Do read till the end because there are quite a few twists and turns in the story. I know some of you have already formulated an opinion about OP and we can assure you that might have to change that ones you go through all the facts, figures, and information in this story.

Hold on tight, this is going to be a good one. Scroll down below to enjoy!

1. Damn hadn’t had a nice dose of family drama in a while, this one sounds real spicy and real dramatic.

Hmm! Prioritizing a dog over your mother, now that is something I want to read. Nope, will not formulate any judgment till I reach the end.

2. Oh my God I absolutely hate those parents how to decide for you that you are on your own ones you turn 18 So dumb! 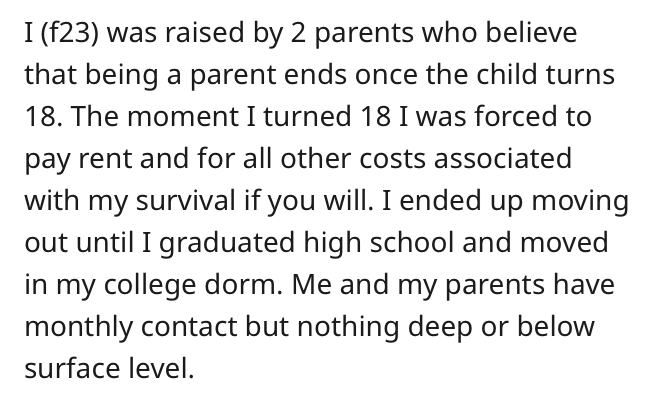 I think it was a good decision to move out because what’s the point in a family that makes you pay under their watch. Unfair.

3. So her mother developed cancer for which they decided to call upon their long lost daughter and she, due to unavailability of funds, couldn’t help contribute to the expense.

Well, at least she didn’t refuse or anything. And I don’t really understand why would you burden your own daughter for this matter, the daughter you had always burdened all your life because you believed in some dumb rule related to independence. 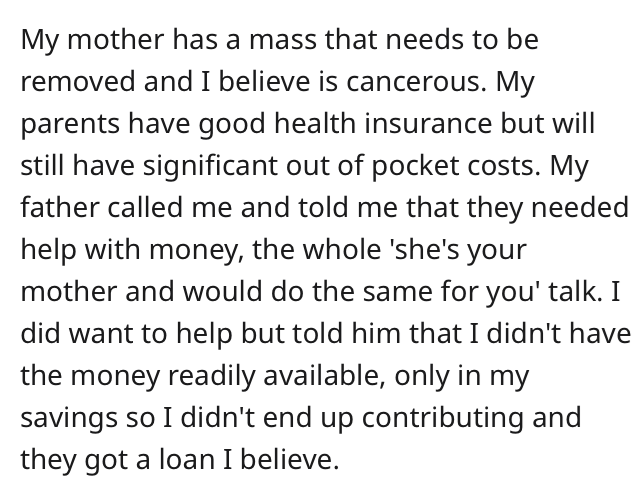 4. Look what misunderstanding does. I think the Dad got it all wrong. 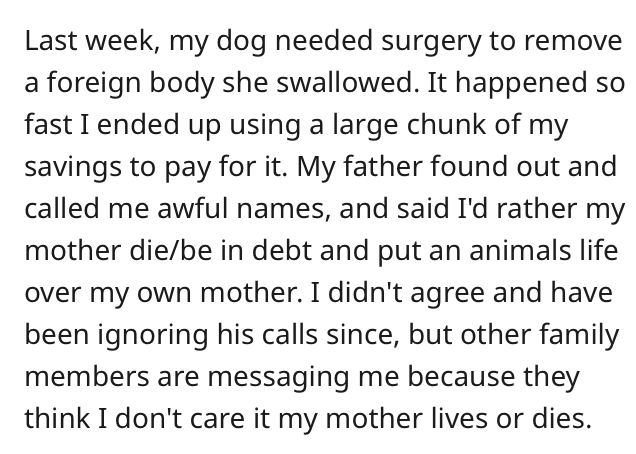 It is very clear that the daughter is not wrong in this scenario. At the time of her mother’s surgery, she did not have the funds readily available to help pay for her surgery and that is why she failed to contribute. It’s not like she intentionally didn’t pay or anything. And perhaps at the time of the dog’s surgery she had the required funds available. You can’t link the two situations up. Saying that she prioritized a dog over her own mother sounds very unfair and rather disappointing coming from her own parents. OP was NTA and I am ready to fight anyone who says otherwise.

Here’s what the community had to say on the matter. Spoiler alert: It is what you think it is, now that you know what really happened,

1. Parents have children only when they can bear the expenses of their children. Morally, this is how this relationship is supposed to go and the parents did not honor it rightly. 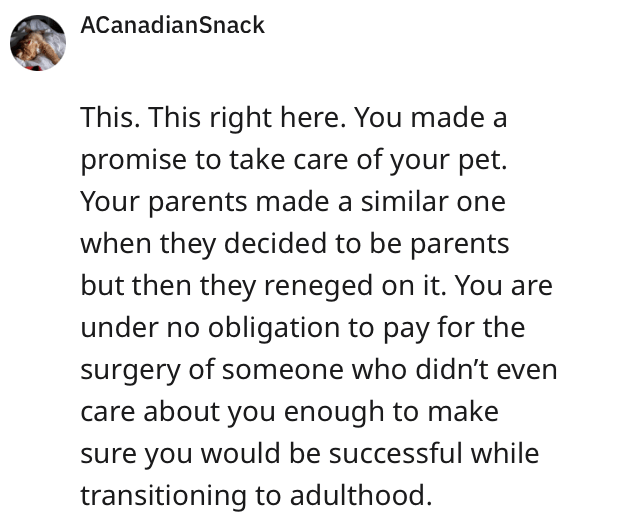 2. OP was dependant on her parents and they just threw her away as soon as she turned adult. 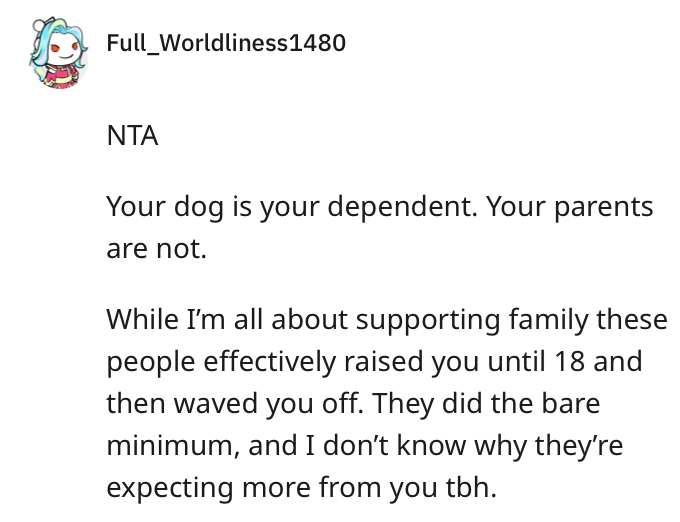 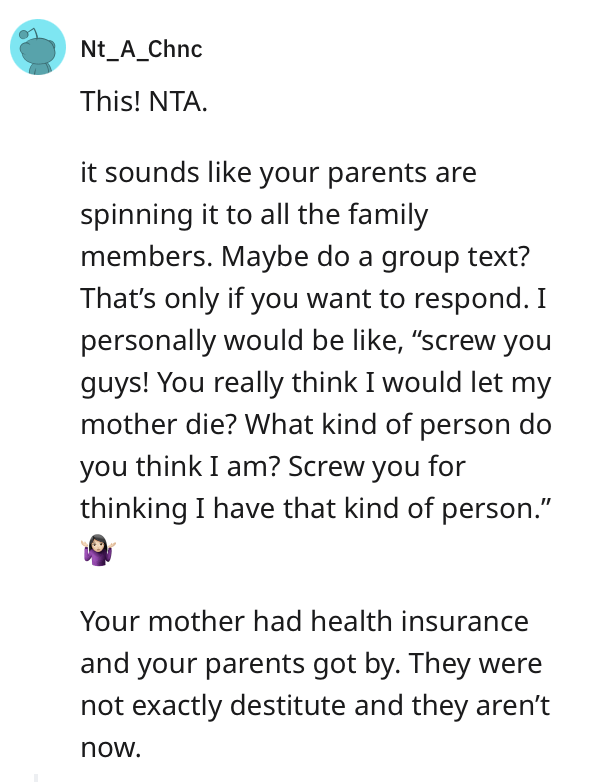 4.  Savings are for your own emergencies and not to serve your parents’ needs. 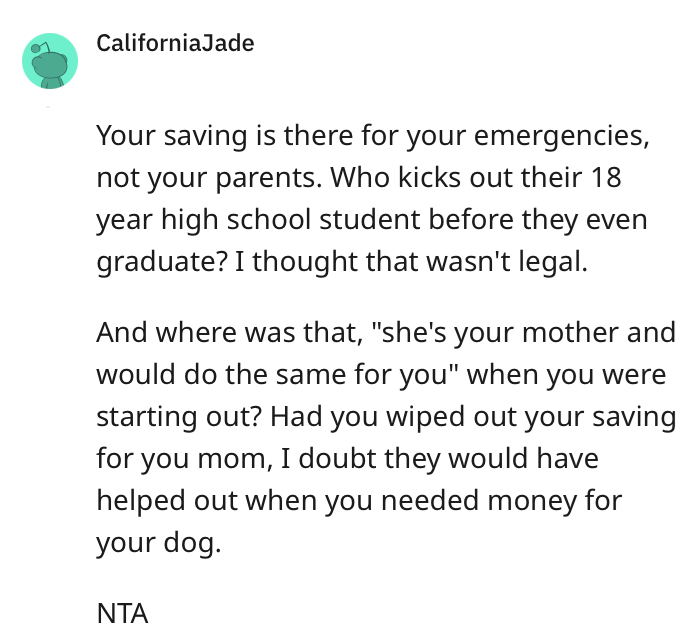 5. She adopted an animal, she took up the responsibility to care for it, and she committed to her promise. Simple as that. 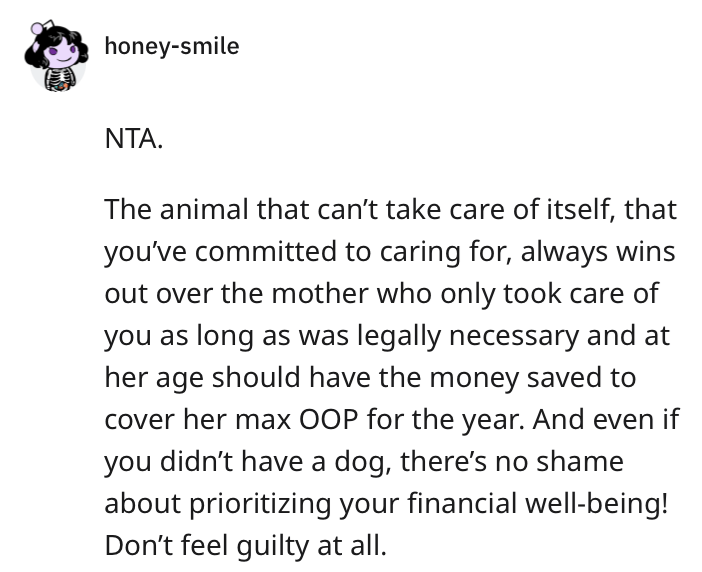 6. Some unloaded on the healthcare system as well. 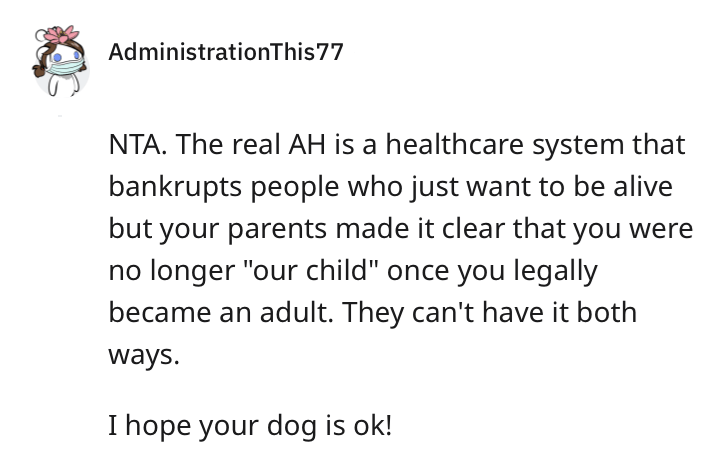 7. People suggested OP not feel guilty. There is a huge cost differential between a human surgery and dog surgery. 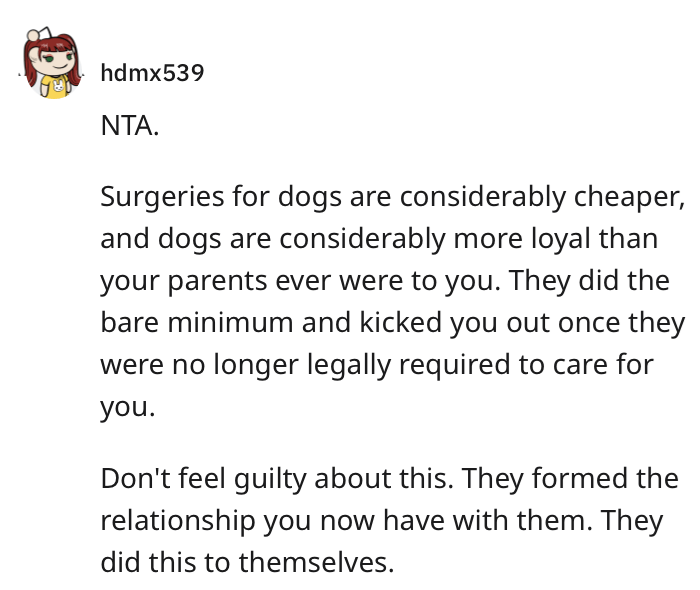 What do you guys think about it? Do share your thoughts in the comments section down below.