Most parents want their kids to succeed.

So having a child at sixteen and becoming married at eighteen doesn’t really help. I mean I have nothing against people who decide to get married at a young age or want kids when they are not even an adult, but you have to admit it can halt someone’s life. I understand every person is an individual and parents can’t really force their kid to mould into someone they are not. But it is clear this family just wants what is best for their daughter.

However, if they continue to meddle in her person life, she will just cut off any contact with them as soon as she is able to. You see this girl wants to get married at 18 to the father of her child who is also in the military. And understandably her parents are none too happy about this turn of events. They wanted more from their daughter but what else can they do but support her when she needs help?

I mean they have been dating for a long while which bodes well for their relationship. 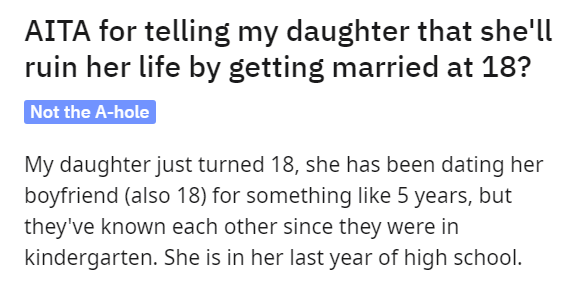 A child can halt anyone’s life especially when you are so young.

It seems that the guy wants to do right by his kid and his girlfriend which is good. 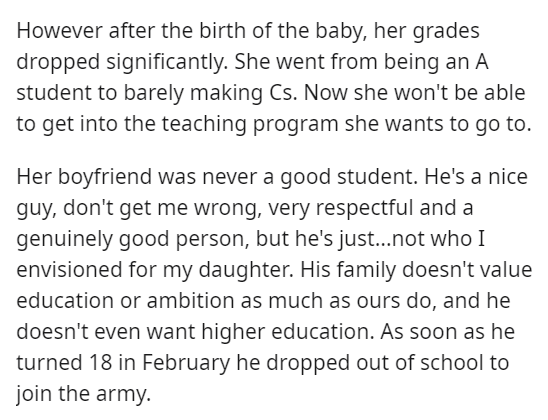 They are quite young and in love but that doesn’t always last. 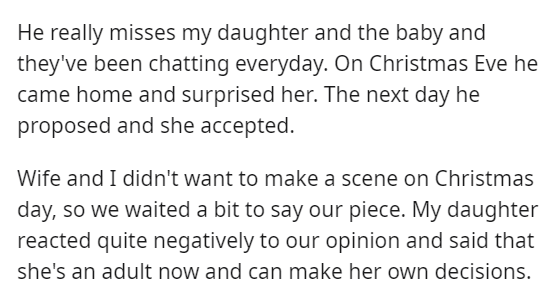 The parents should tell her the truth but ultimately it is her decision. 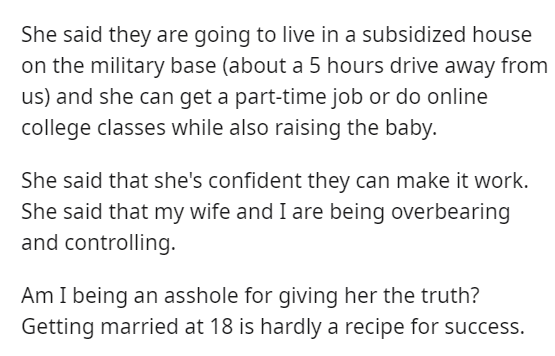 They want what is best for their daughter, but they can’t force her. 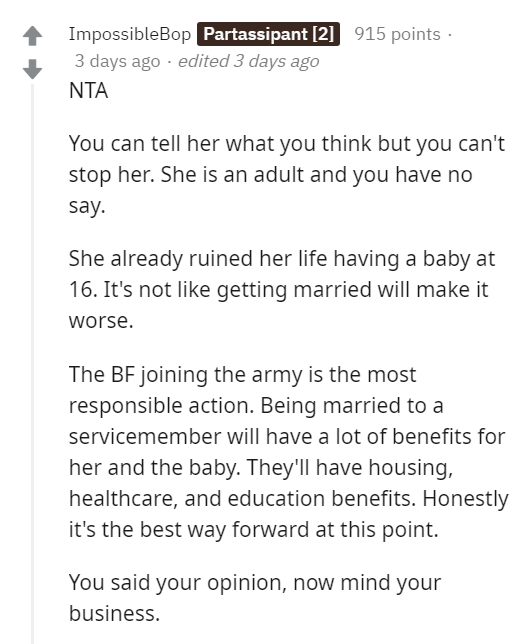 It is sad, but you work with what you have.

Your daughter is able to make her own choices. Even if you think they’re bad choices, they’re hers to make. Constantly telling her that her choices are bad or pushing her to change them will only make her cling to them more and push her away from you. You can let her know that you’re concerned that she seems to be putting her dreams aside for this, but what she needs to hear is that you love her and will support her no matter what. –badb-crow

Sadly, there is a high chance this marriage won’t work out, but you have to be there for her. 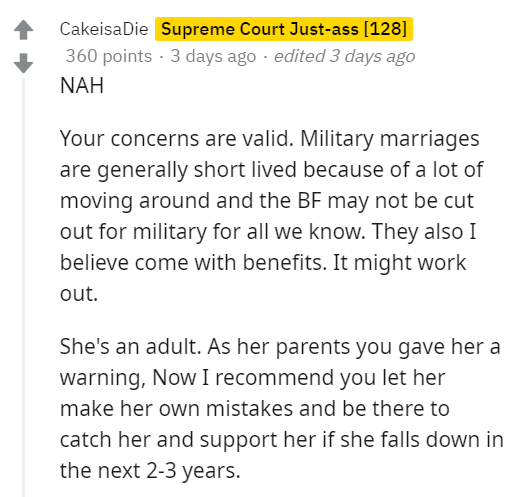 But there is nothing the parents can do at this time. 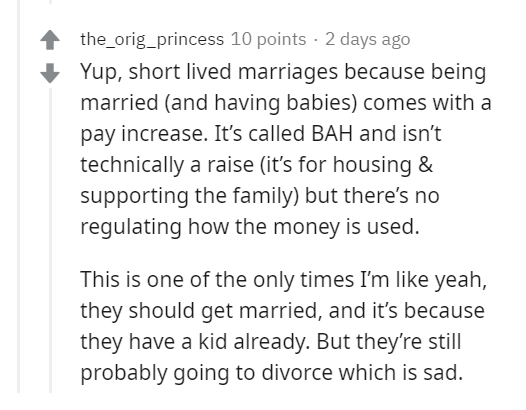 If they were really against all of it, they should have said sooner. It is too late now. 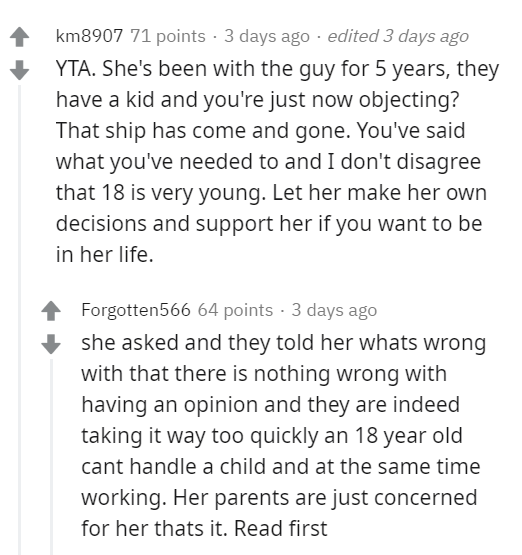 Hopefully, it does work out, and they get to live a happy life. 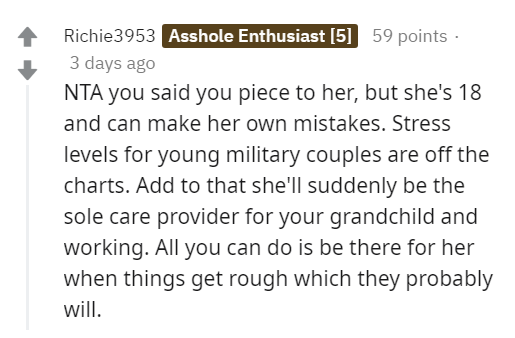 Saying ‘I told you so’ only pushes your kid away from, and you don’t want that. 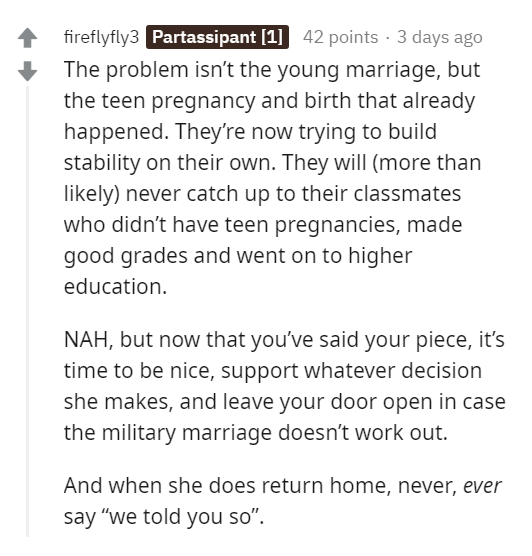 NAH. Your daughter is right, she’s an adult and can make her own decisions. She and her boyfriend have known each other since they were little, been dating for five years (and at that age, that’s the high school equivalent of being married for twenty-five years already), and also already have a child together. A big indicator of the seriousness of this relationship is the fact that they stayed together after the baby was born and seem to really love each other. Raising a child is hard, but it’s that much harder when you’re a teenager.

Having kids can do a number on adult marriages and relationships, so it says a lot that they’re still together. On the other hand, eighteen is still very young. She may be an adult, but she’s a baby adult. A pre-adult, if you will. She can legally make her own choices, and she may make good choices for herself, but the fact of the matter is that she is quite young and may not be able to make the best choices. Your brain doesn’t stop developing until you’re twenty-five after all. And at 18 (assuming you’re in the US) there are still things you can’t do.

You can’t drink, smoke, stay at certain hotels, or rent a car. I think you are right for voicing your concern (and I really appreciate that you waited until after Christmas to do so, that was very thoughtful of you). There are things that your daughter may not realize about making this decision, such as the reality of being married to a man in the military (military marriages are hard, so I’ve heard), the reality of trying to do college while raising a child (college is much more self-driven than high school, so if she falls behind, it’s on her to do something about it. She’s not considered a kid any more, and that’s part of what comes with it), and the reality of living so far away from home (you won’t be there to help her out, to babysit when she needs you to, or even just to visit. Five hours is a long drive after all).

At the end of the day, she is able to make her own decisions, and you should support your daughter if that is what she decides to do. But you are also not in the wrong for being concerned. I guess you’ll just have to trust your daughter and be there for her in any way you can (especially if things go wrong. But who knows? Maybe they’ll surprise you). Best of luck to all! –yourfriendtherat

Do you think the parents are in the wrong for telling her the truth or should she not get married so young? Comment down below and let us know.