I mean they would rather hire new employees and fire them when they ask for raise rather than keeping hard-working people. That is what happened when a new person bought a store. You see, they had to keep the same employees because it was in one of the clause. Apparently the previous people really cared for their employees and didn’t want their jobs to end at the store. However, the bosses weren’t too happy with one particular person who was earning more than a new employee would need.

So they set on to make him quit. After all, they couldn’t fire him without a reason. So they did everything in their power, but he wasn’t going to do down easy. After all, the union was behind him. Although he had become tired at their childish attempts, so he decided to do something about it. And this is where malicious compliance comes in. Scroll on below and take a look for yourself.

And so this twisty story starts.

The previous bosses were clearly nice people and wanted the best for their employees. 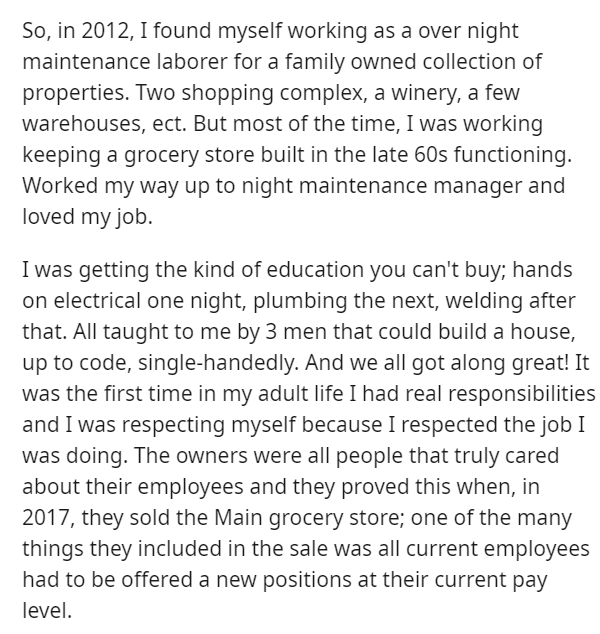 But they didn’t want him, so they tried their best to get him to quit. 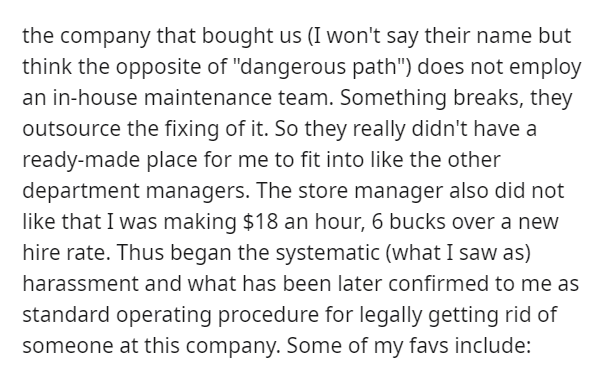 Following is a list of some things they did so that he would quit. 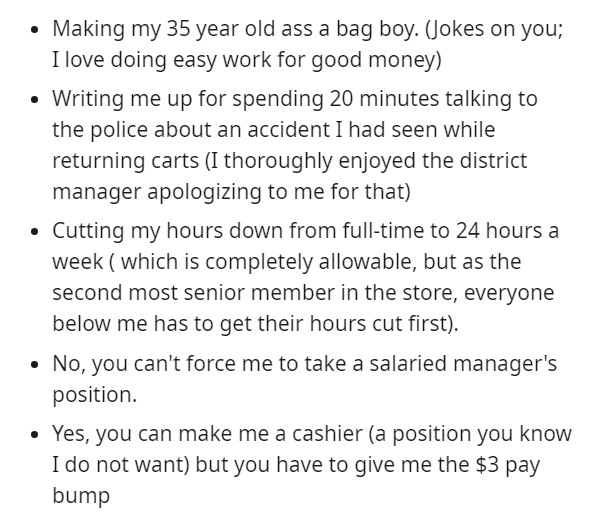 However, he continued to excel at his job and was an all-around hard-working guy. 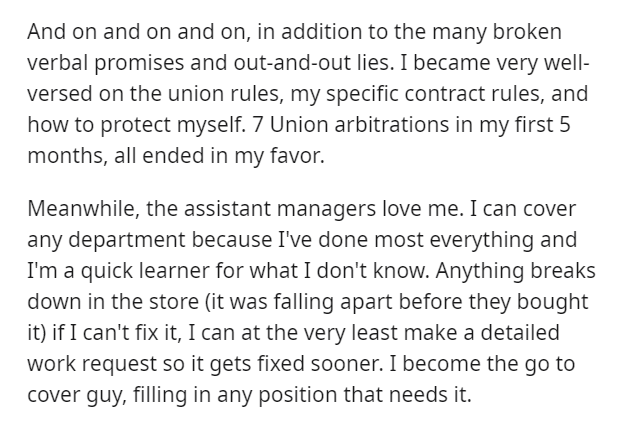 This only works if the union is not in cahoots with management.

95% of the warehouse workers worked in the hubs. There were 5 hub terminals and dozens of outlying terminals. There were exactly 5 nay votes for the contract. Drivers got an immediate 0.5% bump, and 2.5% a year for three years. Warehouse got 0.5% a year.

Union stewards are just as good at ‘fuck you, I got mine’ as the management, and just as underhanded about it, in a LOT of union locals. And there’s often fuck-all a screwed-over worker can do, because there’s no way to file a grievance against the union as a worker in Canada without lawyers and being forced out of the union, which in most union shops means you just got canned, because the shop is closed.

Don’t get me wrong, a union that has your back is a powerful ally in the workplace. If they don’t have your back, they’re a millstone around your neck. –tashkiira

This is where the malicious compliances come in. 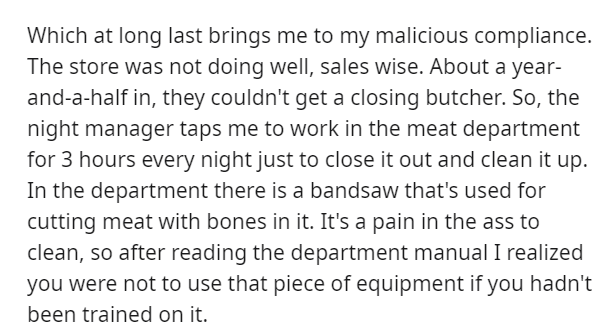 He told the manager what he was going to do as he hadn’t been technically ‘trained’ on it. 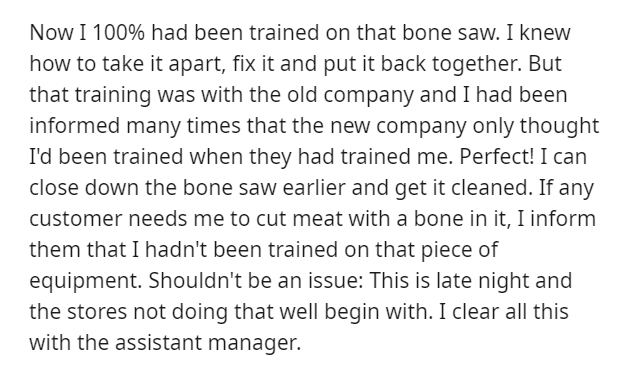 You would think this is where it would end but this is only the start. 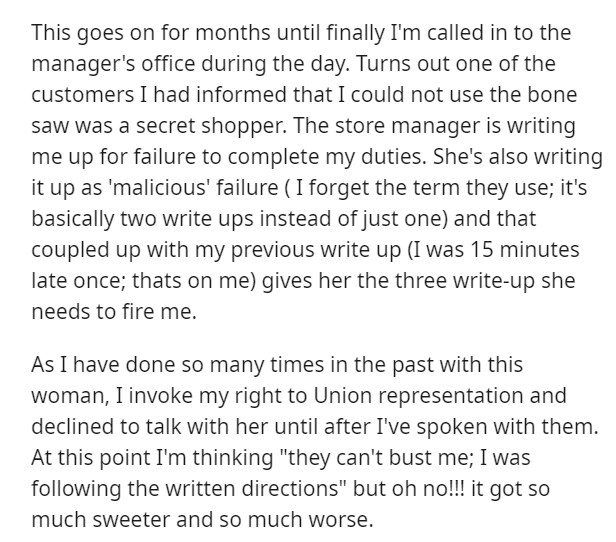 As it turns out, they already had an ongoing issue with the butchers. 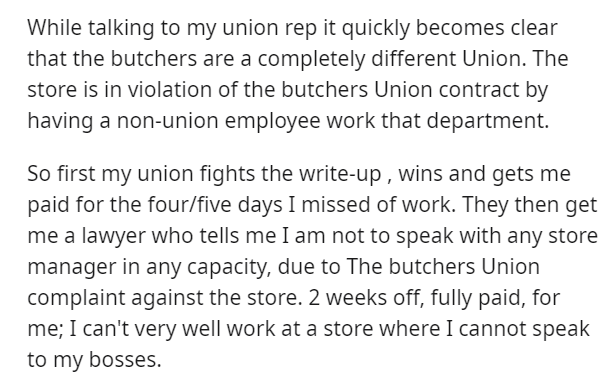 And so he got to stick it to his manager and got some time off. 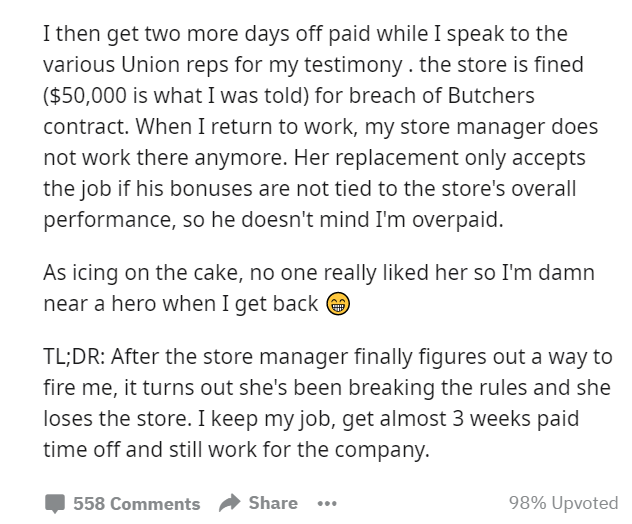 Stop fighting your own better interests and start unionizing with your co-workers.

The only way your employer will ever treat you like a human and not a cog in their machine is to organize like this and give yourself a big stick and shield for when they come with their own big stick to knock you down, to take more from you, to demand more work and responsibility for the same pay-which is theft.

Stop seeing these things as just something you have to accept and see it for the malicious wage theft that it is. Unionize and take the power employers have stolen from workers. –mrevergood

I would say this turned out pretty well for him. 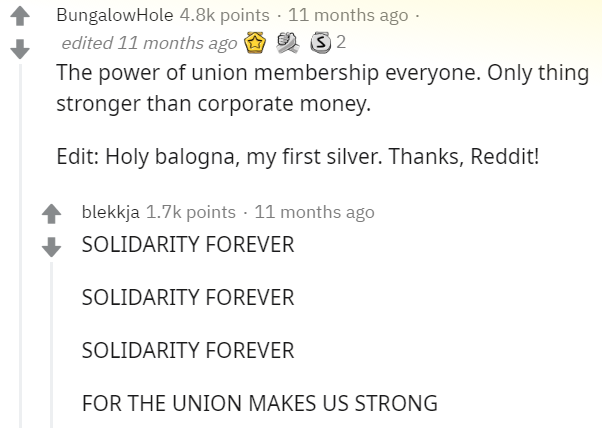 What did you think of this revenge story? Let us know in the comments below.