Disney is known to have joyful and cheerful storylines. Disney stays far away from any disturbing or gruesome plots and storylines. Out of all the possible themes a movie could have, horror and scary movies do not even cross the mind of creators at Disney. Even though we have been noticing very dark characters and themes in the recent movies that have been released, but most of the creations of Disney are family-oriented and suitable to the needs of kids.

In their movies, Disney always shows a happy ending. They show the main characters resolved all the issues they were facing in life and are now spending their lives without any issues. It is famously called “And they lived happily ever after”. We are used to seeing our female Disney characters as pure human beings, who cause no harm to anyone and exist to spread positivity. It is hard to ever imagine our lead characters ever doing something evil. That is what the antagonists are for, right?

However, we all have wondered what our favorite Disney characters would look like if they turned to this evil side. They only exhibit good characteristics, ensuring nothing unjust happens around them. Though we all have imagined what they would like if they turned evil, right? I know I have. I always wondered what it would be like if Snow white planned revenge on the witch, or Cinderella started treating her stepfamily the same way they treated her. Travis Falligant is an incredibly talented artist, who reimagined some Disney characters at their worst. He visioned them to be part of scary movies and how their outlook would be like. Lucky for us, he turned this vision into art illustrations so we all can see them too!

Via: TRAVIS FALLIGANT FOR BREAK.COM

Scroll below to watch your favorite characters channeling their evil side! 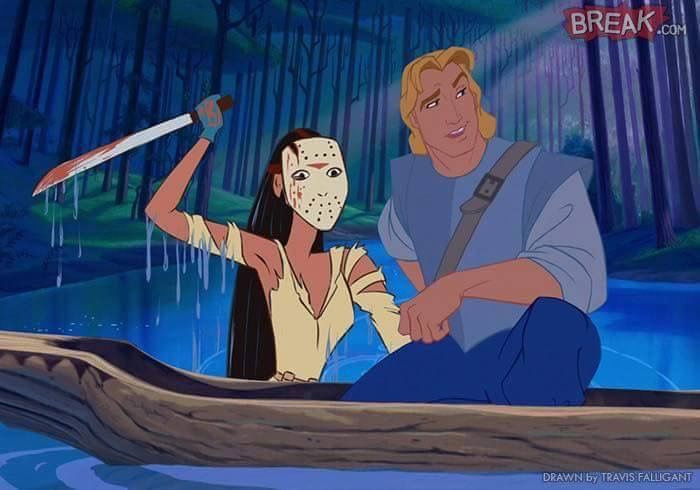 If there is any character we would not even dream of turning to the evil side, it is Pocahontas. Now I am just imagining Pocahontas killing all the villagers. What a blood bath! 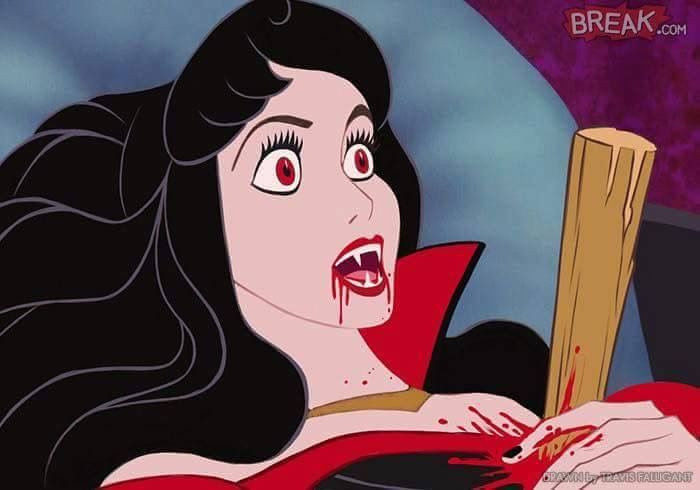 Aurora becoming Dracula would be the craziest twist in the movie. She could now take revenge from the Witch for making her fall asleep.

3. Anna and Elsa aka Twins from The Shining 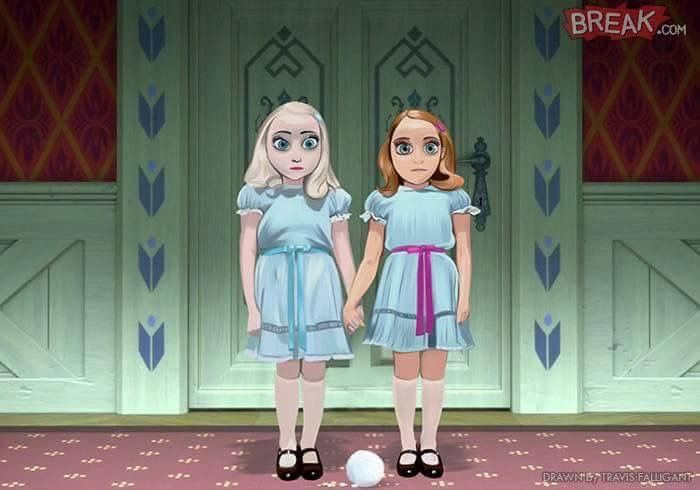 When I tell you I would not be able to see Anna and Else the same way again, I am speaking the absolute truth.

4. Cinderella and Carrie are the same people! 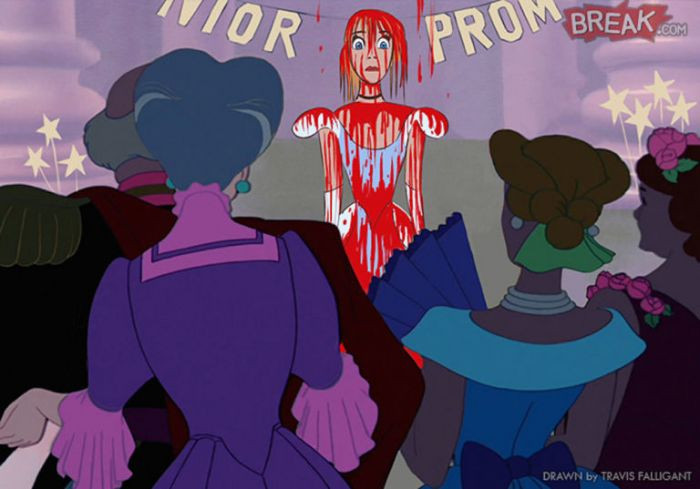 Cinderella could not take revenge on her haters while being the perfect human being that she is, so she turned into Carrie! The blood is of no other than her stepsisters and awful stepmother.

5. Merger of Jasmin and Regan – The Exorcist 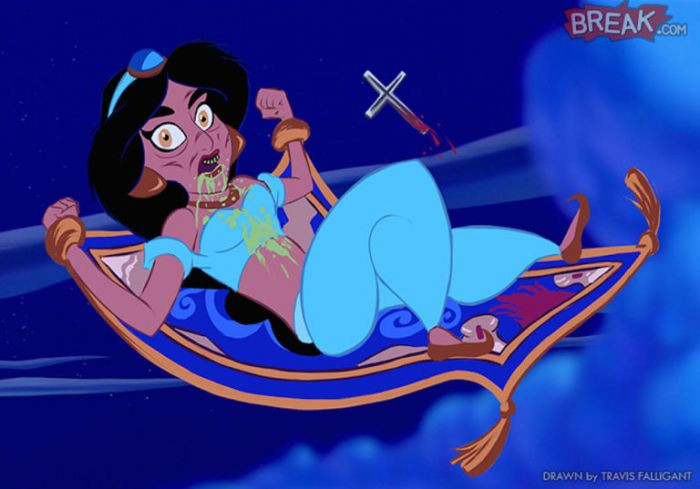 The mesmerizing beauty of Jasmin is compromised as Regan takes over her! Instead of being dazzled by her beauty, we are extremely terrified of her big popping eyes and the liquid spewing out of her mouth.

6. Ariel left the prince to go to The Black Lagoon! 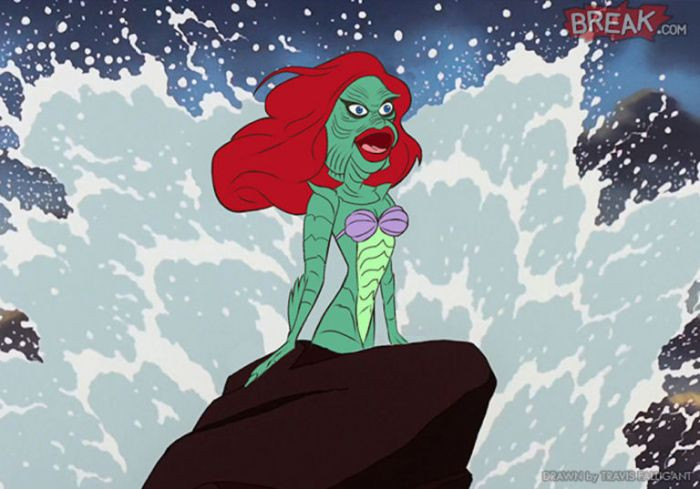 Ariel used to be our ultimate crush in childhood. Never could I ever imagine her turning into something so vicious! My childhood is officially ruined. 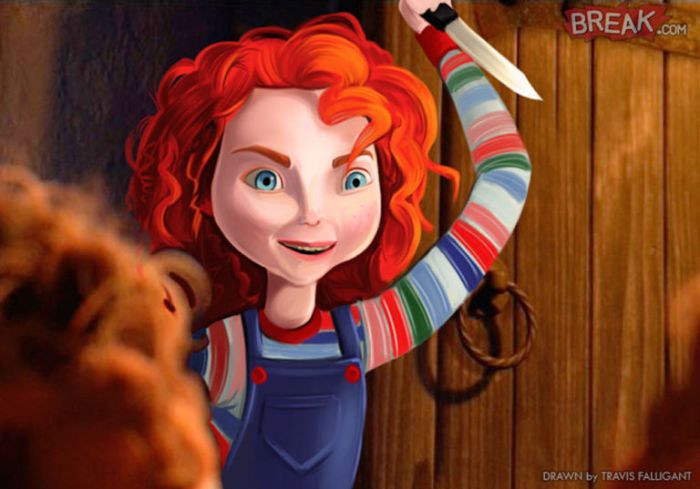 I feel guilty for saying this but Merida gives Chucky such a better look! Chucky is so creepy and terrifying. It has stitches all over his face which makes it seem like his face got torn apart and then sewed pack into one piece. This makes Chucky’s character even scarier that his face was stitched back into one piece. Merida gives Chucky a better look. It would even make a better plotline because no one can imagine a pretty dol like Merida to do something evil. 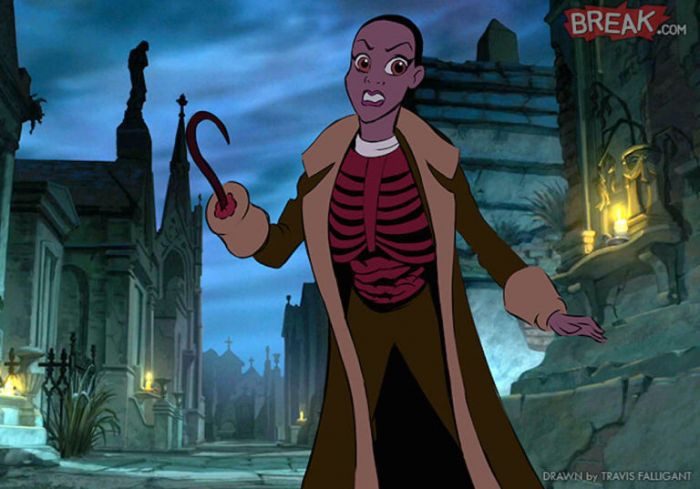 If anything, the frog is not coming anywhere near Tiana now. He is going to run away as far as possible with this princess that has a hook for one hand.

9. Bella morphing into The Wolfman 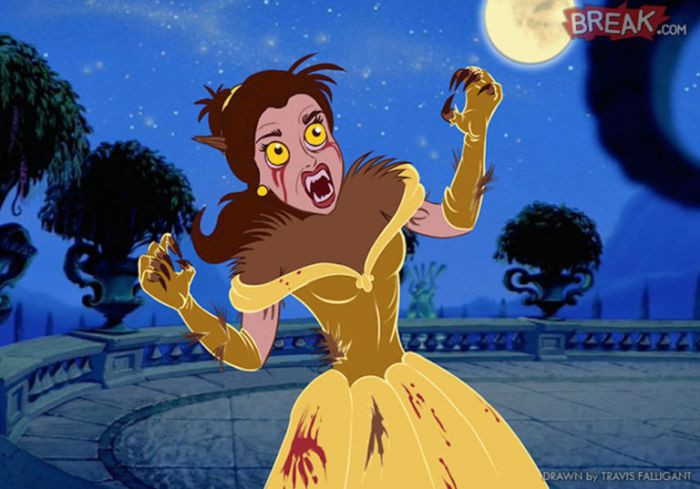 This would have been the biggest plot twist in the history of Disney movies ever. It is more suitable for Bella’s character to turn into a wolf than any other princess because Bella is already dealing with a huge beast. It only makes sense if the person against the Beast is also a wild animal. In my opinion, Bella and the beast will make better partners because now they have a common thing that they share. They are both wild creatures in disguise, but beautiful in their personality. However, Bella as a wolf does not look very safe. She has bloodstains all over her!

10. Samara, from The Ring, took over Mulan 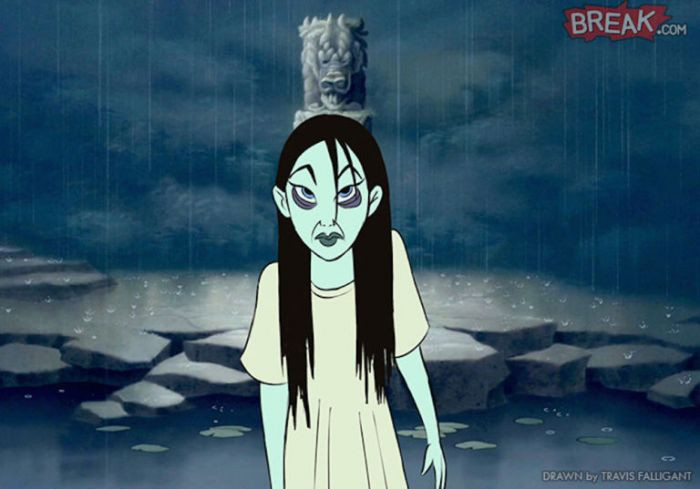 Oh no! Mulan was not supposed to go on the dark side. She was supposed to be a warrior to protect her father, not terrorize everyone. However, I do think the addition of Samara into Mulan’s character could be very beneficial in saving Mulan’s elderly father There is no way anyone can defeat Mulan in Samara’s body.

11. Snow as Freddy Kreuger from A Nightmare on the Elm street 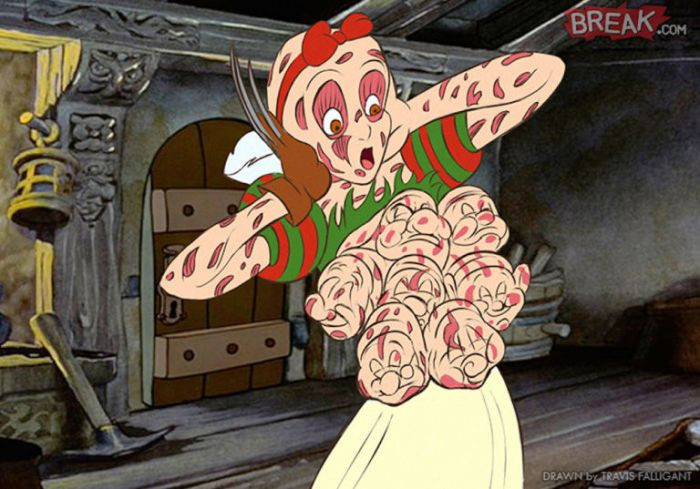 Out of all the images, this one is the most mind-blowing one! Snow white is not even remotely recognizable. She does not even look like a human being. But we have to admit, she has a greater chance of fighting with the witch now. There is no way that the witch can defeat Snow white now. Even though we find the witch very scary but Snow-white looks a hundred times scarier now. And with the help of those nails, snow-white can take over any creature within a minute. An apple got nothing over her!

The creepier part of these art creations is that the artist merged two characters from different movies into one being. Combining Anna and Elsa to The Twins is the most remarkable innovation. It would be so interesting to see these positive characters turn to the evil side. Disney has filled our minds with joyful vibes but having horror themes in the movies would be good for a change. What do you all think?

Let us know which character freaked you out the most!