Few people give groomers enough credit for their labor of love. Dogs are great, but bathing and grooming them requires a lot of courage and effort. Can you imagine spending every day at work with pets you don’t know? Some dogs can be aggressive, which makes the groomer’s job much more challenging and dangerous. Every time they interact with a dog, they essentially have to take a chance at getting growled at, scratched, and bit. The owner of the dog must also be taken into account. Retail workers have often advised us that interacting with people on a daily basis is the worst. When it comes to their dogs, dog owners don’t play around.

There are people who can’t be bothered and people who are very picky about their dogs. Both can be excruciating to handle. When it came to interacting with extremely challenging dog owners, this groomer’s assistant was an expert. She just had a memorable conversation with one. This woman arrived with her Malinois-Husky mix dog and requested that the groomer trim its fur. The OP told the dog owner that they couldn’t shave her dog since it would be bad for the skin and health of the dog.

1. The owner of the dog has been phoning OP since March to get them to shave her dog.

2. Even her mother was used by the dog owner to persuade the groomer to change their opinion. 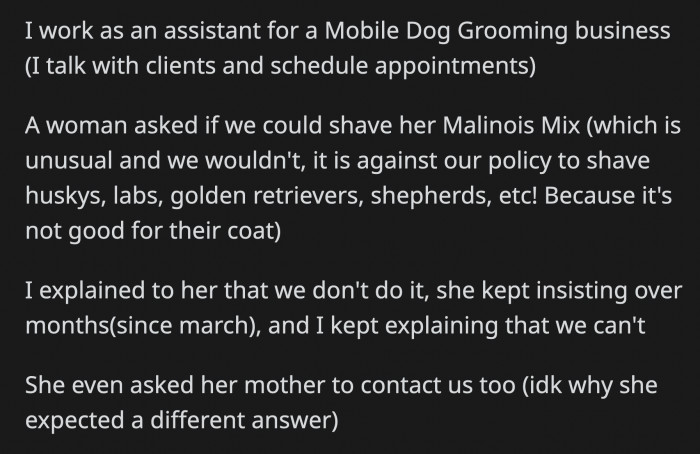 3. The OP insisted that they had a rule against shaving dogs like hers and that the groomer would prefer not to work with this particular breed because of past hazardous incidents. 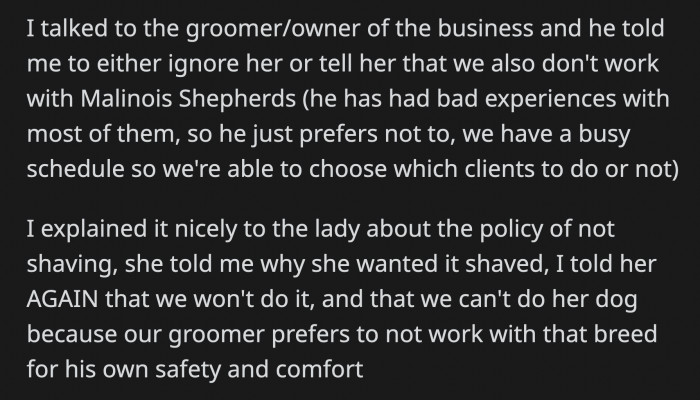 4. Whenever the woman’s pledge to muzzle her dog didn’t persuade OP and her supervisor, the aggressive dog owner accused OP of being a “dog racist” instead.

5. After OP reiterated their stance one more time, it appeared as though the lady had finally understood.

6. Later, the OP noted that she didn’t understand why the woman was so adamant about getting her dog groomed there and why she was shocked when the woman called her a “dog racist.” 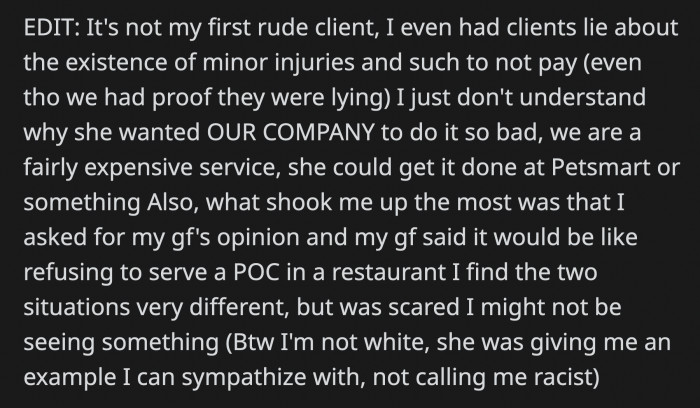 7. All was not well, however, as the dog owner afterwards left a negative Yelp review, expressing her fury that the establishment won’t accept all dog kinds. 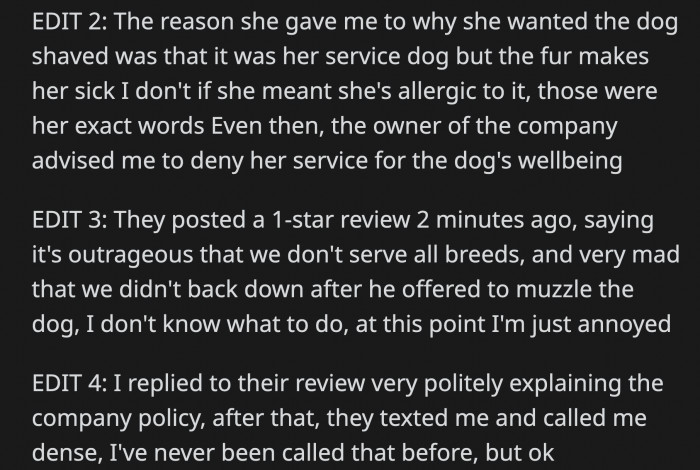 8. When OP responded to the client’s one-star review, she certainly took this advise into consideration.

9. She gave an explanation of why the bad evaluation had so discouraged her.

10. It might be a chance for OP to demonstrate to future clients that they run a reliable business if they addressed the review professionally. 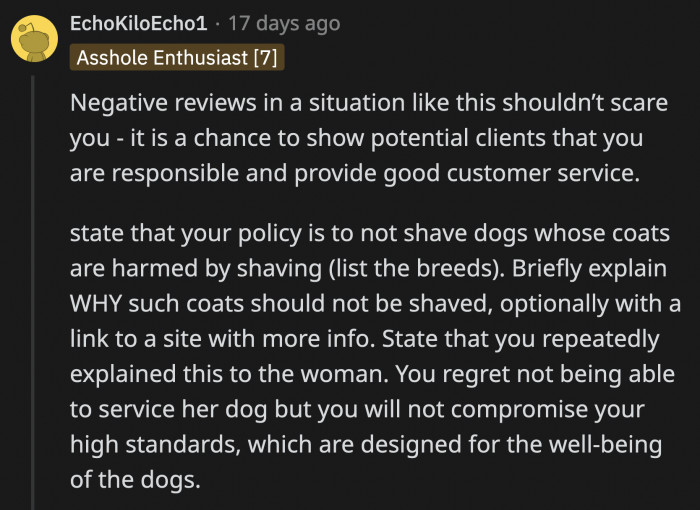 11. OP has nothing to fear because they did nothing wrong 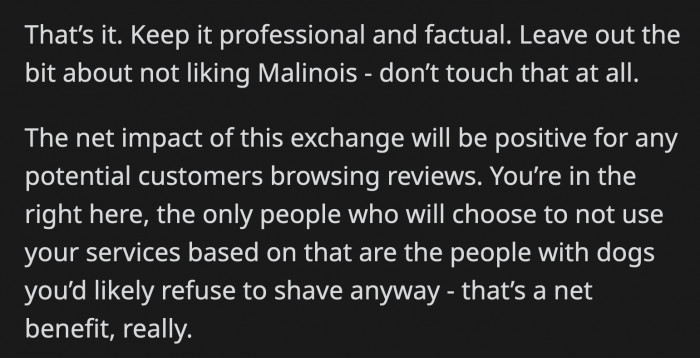 Now read the comments of the Redditors on this story. Scroll down till the end.

12. Another person who works in the same industry said that OP did the right thing 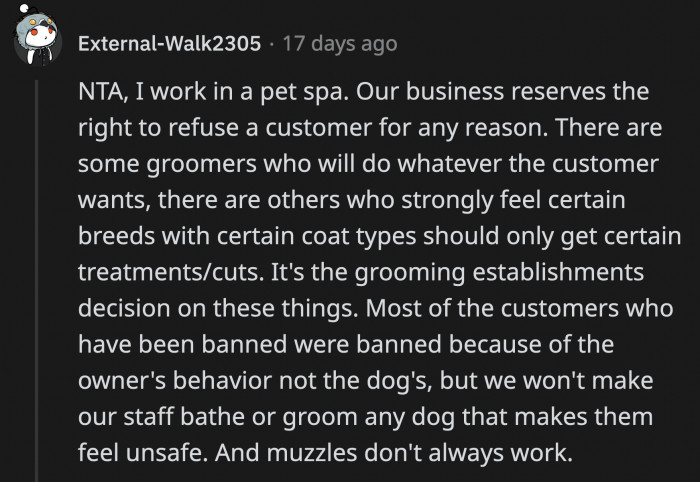 13. They did question if the dog owner’s desperate need to have her pet groomed at OP’s establishment was related to the fact that she had been barred from using the other grooming facilities in the vicinity. 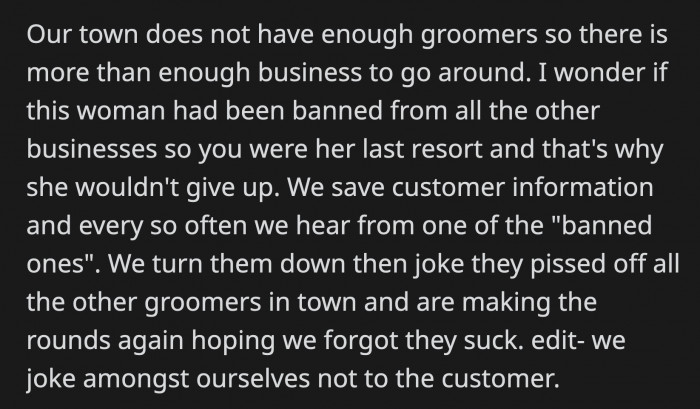 14. Dog racism is not a real phenomenon, either. To equate being turned away from a dog grooming shop with racism is absurd. It is illogical in every way. 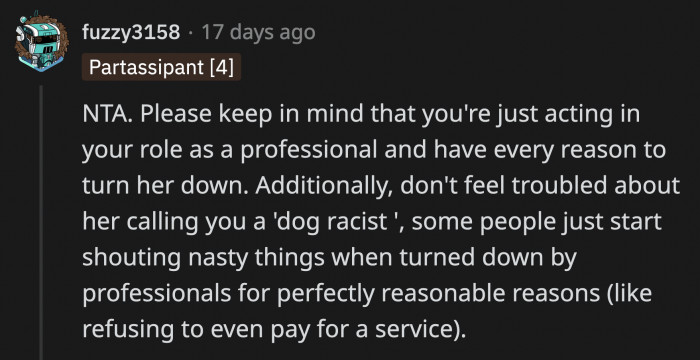 Share your thoughts on this one with us. What do you think of the story? What would you do if you were in OP’s position? For more content, keep visiting us!