I never understood the treats tradition.

In many jobs, new employees are asked to bring treats when they are hired from donuts to pizza. However, to me it is a weird tradition that shouldn’t exist in the first place. I understand that it is sort of a team-building exercise but why force people into it? if someone wants to bring treats and socialize, they can do so themselves.

And you don’t have to bring food just to socialize with your work members. Putting aside the weird tradition today we have a story of how one person answered back. You see, while they didn’t mind bringing donuts to work, they hated how they were practically being forced into it. If someone kept repeating the same thing again and again, anyone would get annoyed.

And this Reddit user did get irritated so they hatched a plan. And you have to scroll on below to see how that went.

They haven’t even gotten their first paycheck but are required to do this? 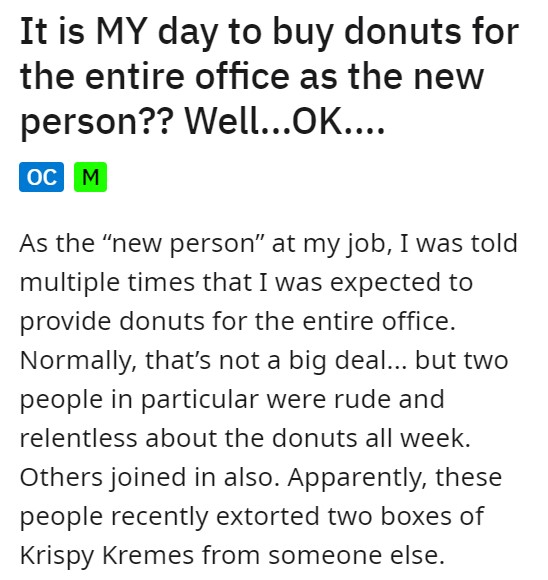 That is not professional behavior at all.

The time to act childish should be over by 30 but apparently these guys didn’t get the memo. 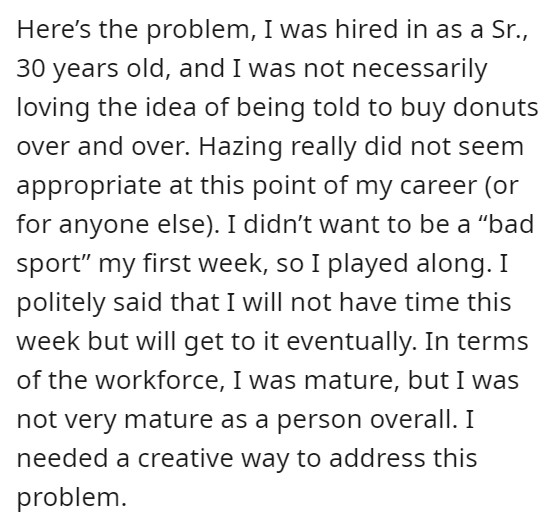 Never tried those but anything from a gas station does not sound very appetizing. 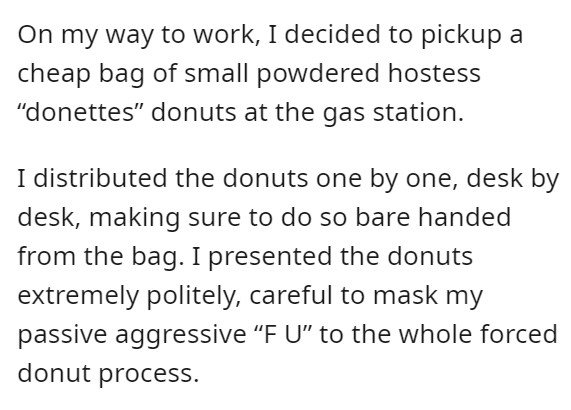 They probably figured out what you meant by this gesture. 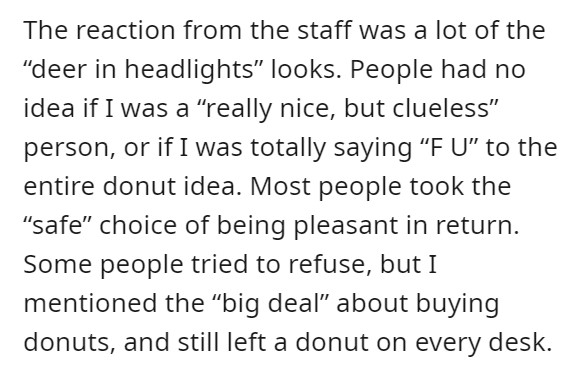 However, the two ‘idiots’ could not get the hint. 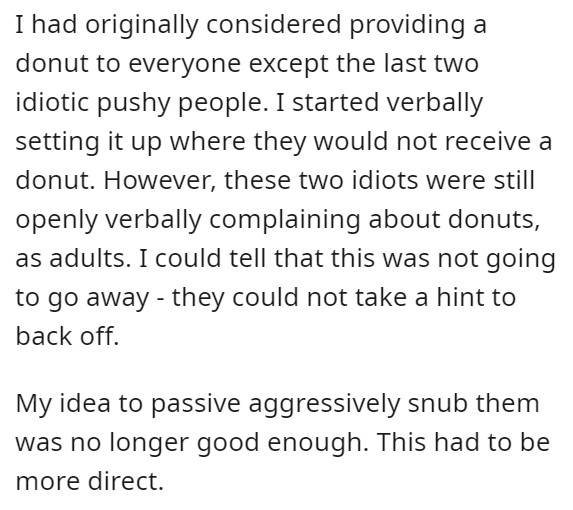 So the Reddit user decided a direct approach was necessary. 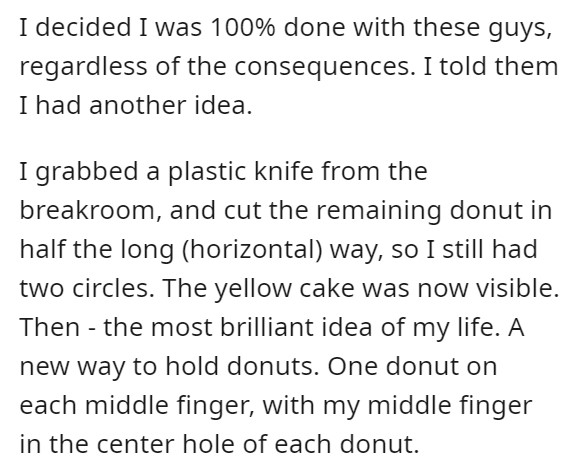 I can just imagine the look of confusion and horror on their faces. 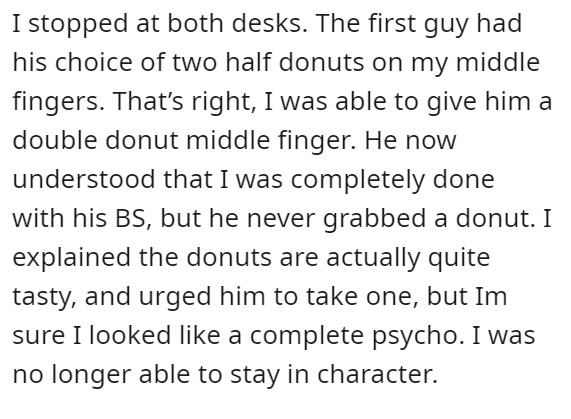 I bet that was extremely terrifying. 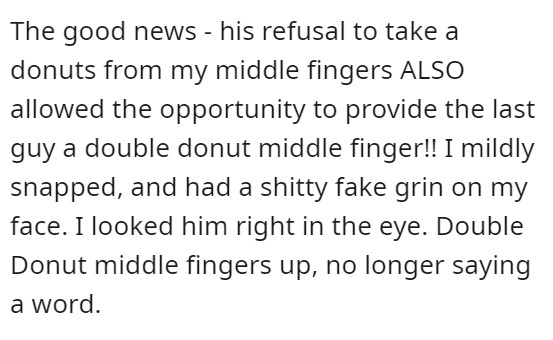 I don’t think anyone would try to bother you after that. 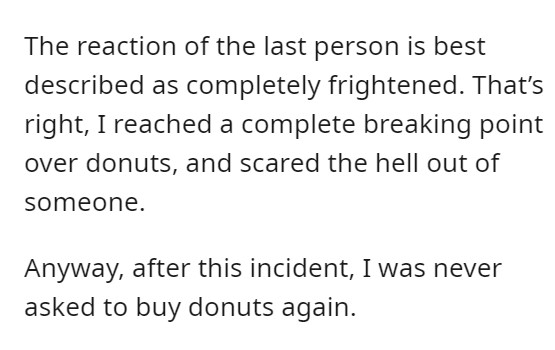 He then goes on to explain a bit more about the two guys. 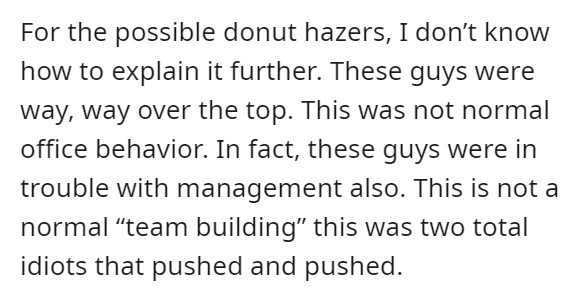 I do not need you to go back YEARS to try and retroactively change my behavior. This was a “malicious compliance” story that I thought was humorous enough to share, nothing more. I snapped and acted crazy, but I’m quite happy now in a good career and this was YEARS also. It’s all good now!! I do not need career advice here. Again, all good.

In no way am I saying that I acted properly lol. In fact, it was a terrible office response, but I wasn’t fired. I ended up taking another position 3 months later. Some of the people in the office actually appreciated that I stood up to these idiots, so it was “team-building” in a way.

There are definitely different ways I could have handled this, but it’s over now. Even if I handed it differently, generally “nice ending stories where nothing happens” are not considered malicious compliance. Is that really what you were looking for here? –grillbuster5

They could have handled it better but it wouldn’t have been as fun to read. 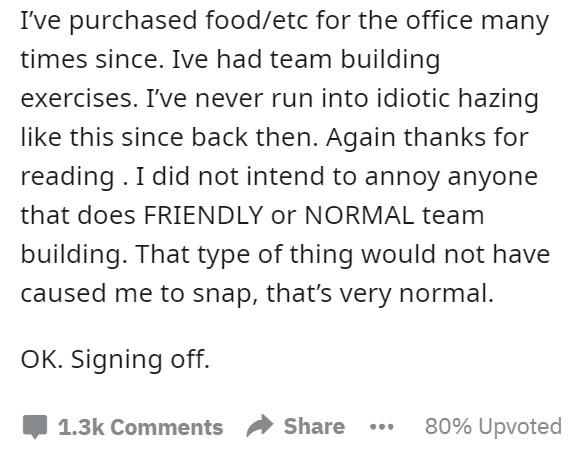 At least it doesn’t sound as awkward as going to every desk to hand-deliver a donut. 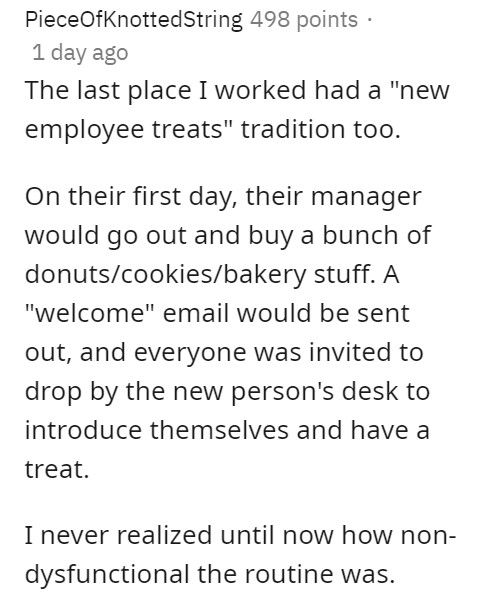 What do you think of this tradition? Do you think it is necessary or should it be left in the past? Let us know in the comments below.