This is why stores announce their closing times.

After all, they don’t want customers to get stuck in the store after closing time which has actually happened before. And not only that warning about closing time is actually good since the customer can hurry up and leave before the store closes. However, this apparent manager doesn’t think so.

She thought it was very rude and that the customer should not be rushed. I have no idea how or why she thought this was a good idea but she soon learned what a horrible way this was when the employee complied. If you don’t tell them what the closing time is, how are they supposed to know?

Night shifts can be less hectic but anyone is bound to get tired by 2 am. 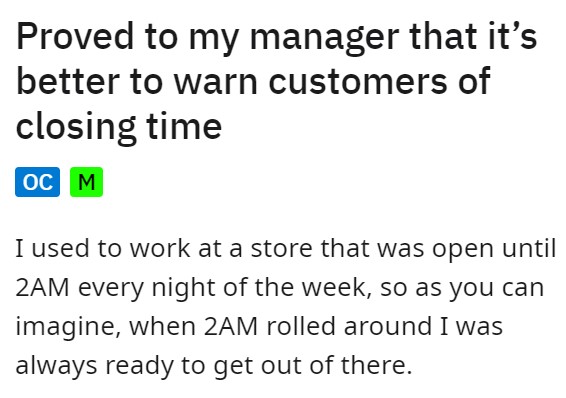 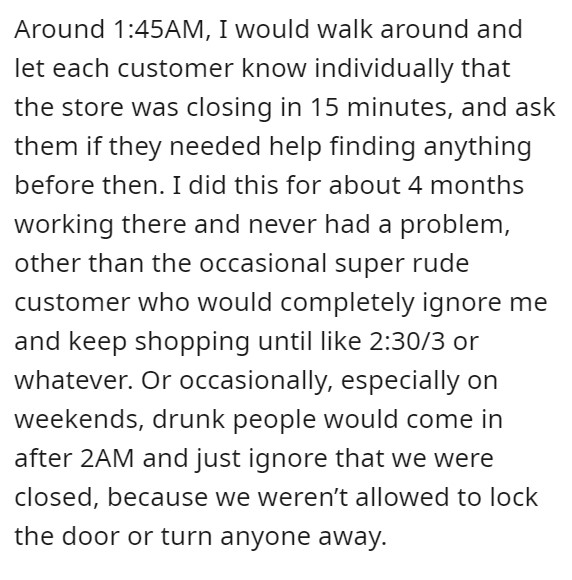 Although this manager didn’t seem to think so and reprimanded the Reddit user. 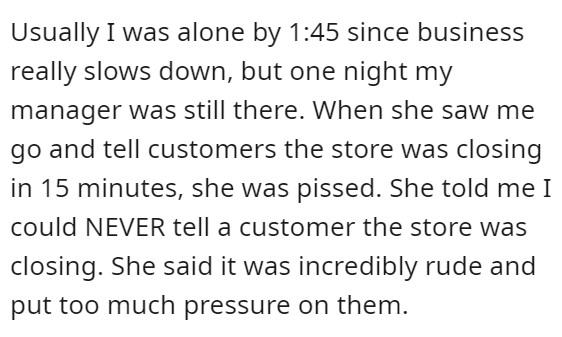 As you can imagine, they are still bitter about this when an idea pops into their head.

Was it really that big a store? I can’t imagine staying in a store for that long. 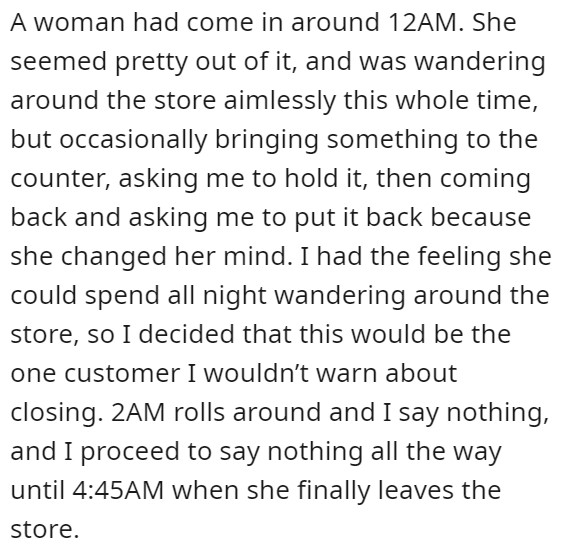 I bet she wanted to eat her words right there and then. 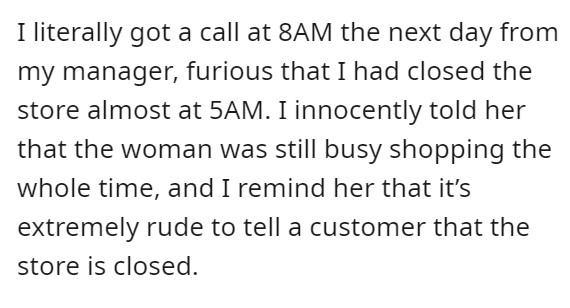 At least this way the upper management learned their lesson. 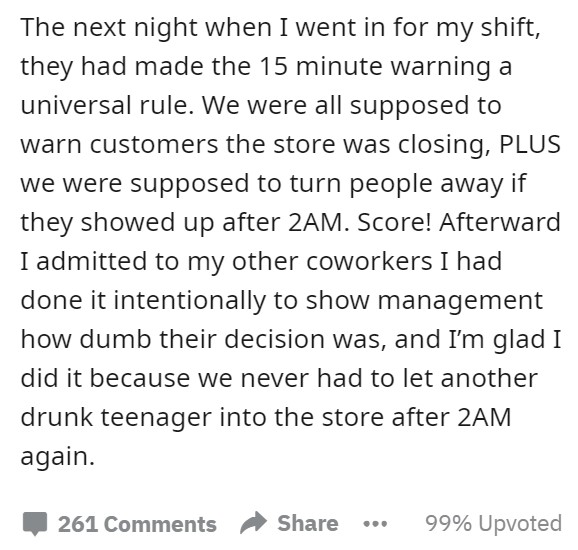 Back in the ’80s I often had to close the grocery store I was the “part-time assistant front end manager” for. I was 16 years old. We closed at 8:00 pm. If people ignored the 15-minute warning PA announcement and then the “we are now closed, please bring your items to the front to complete your purchases.”

I would drop down to one cashier and then systematically start turning off the lights. I. want. to. go. home. –RambleMan 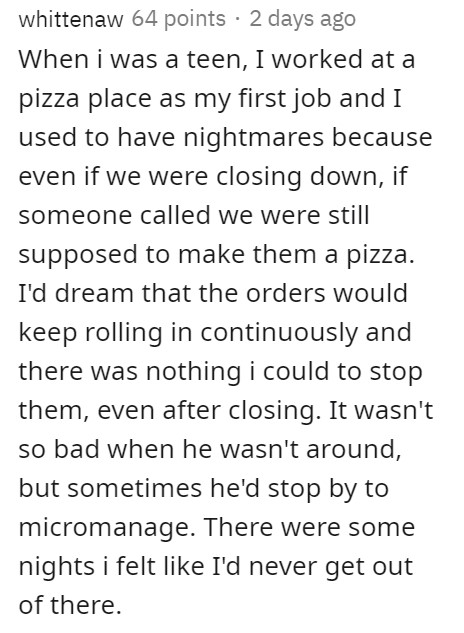 I have once or twice been in a store near the closing time and it is always awkward. 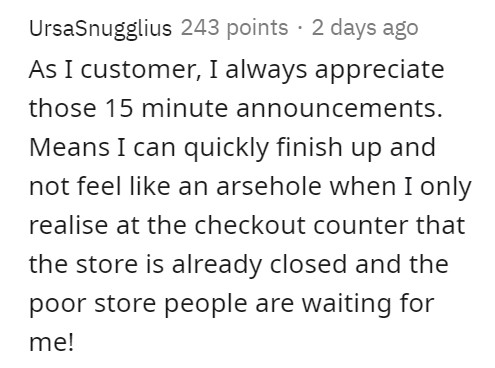 This is why announcements exist. 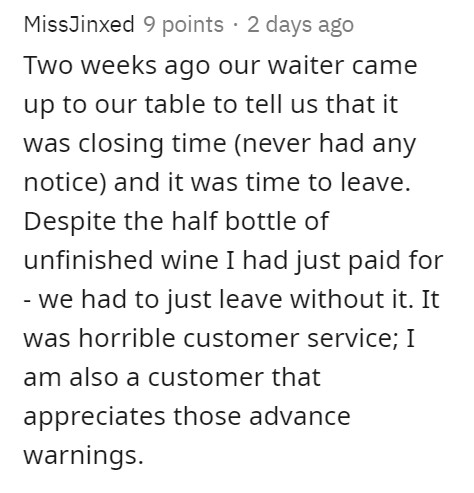 I used to work at a company that had showroom hours on Saturdays, but closed really early, like 3 pm. People would always bitch about it. There was one manager that would never turn people away or tell them we were closing and people would have stories of staying many hours past closing time. This made it hard to keep staff, so a different manager took on that role and made everyone leave, which was awesome.

However, customers would try and pull shit all the time about the hours. People would claim they weren’t posted anywhere when they were at eye level on the only entrance door. I have no doubt some people didn’t read them, but that’s not my problem.

One woman tried this. She said she could stay as long as age needed because the hours weren’t posted. I showed her where she had walked past them. She then said we had to honor the hours as posted online. I pulled them up and showed her they matched what was posted. This was all totally okayed by the manager. She was an itch in other ways, but she made sure we closed on time because she knew that letting customers stay past closing didn’t actually increase sales. Those lingering customers never bought anything. –notreallylucy

That is what they deserve. 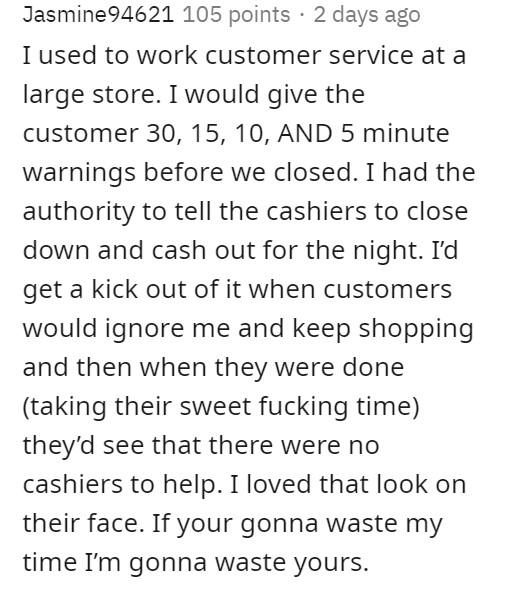 Have you ever had a similar experience? If so why not comment down below and let us know. Don’t forget to share so others can comment as well.