We all agree that having respectful and kind neighbors is a blessing! If your neighbors are well-behaved, you’ll have a much easier time living in peace. However, what if your neighbors are disrespectful and constantly intrude on your personal space? Suddenly, life becomes miserable and hell. Nobody wants to live with such kind of neighbors. When finding a new home, we can’t judge the person living behind or nearby our homes. Well, there’s no shortage of Karen around. They’re everywhere – yes, you will find such kinds of people in different retail stores, movie theatres, restaurants, and even the workplace or offices.

So, let’s scroll down to read the whole thing.

Telling your neighbor that you’re their new landlord is the best way to end the disputes.

The couple was childfree.

The couple had been saving, because moving to tropical paradise was their dream.

However, the cost of living there was incredibly expensive. 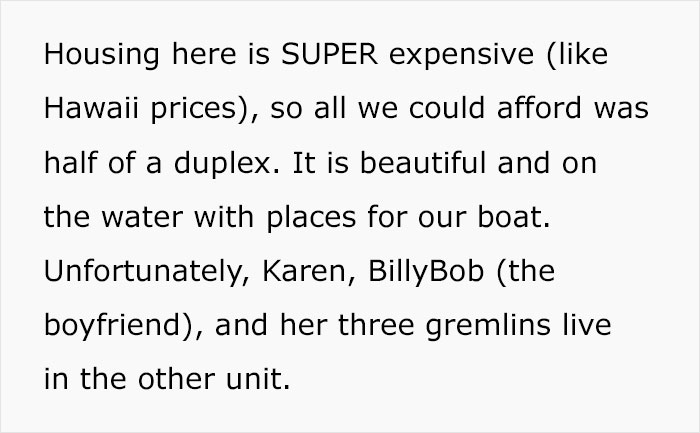 Here’s the Setup of The Duplex where the couple decided to live. 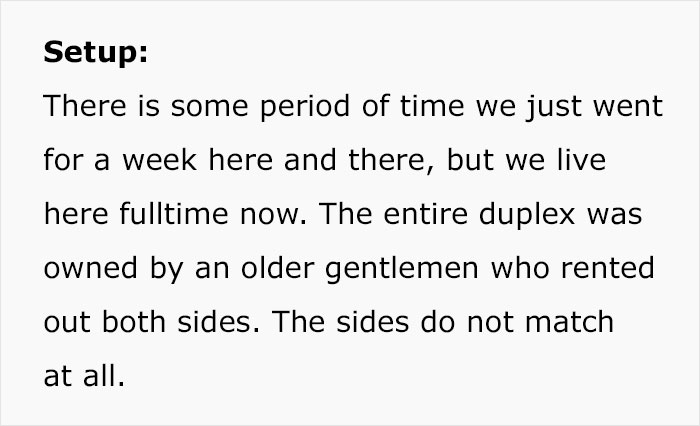 That’s how the Duplex was divided between the two neighbors. 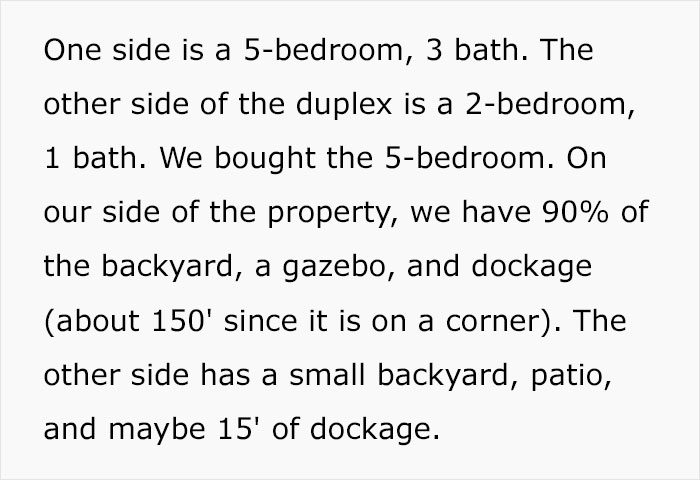 According to the rental leases, the renters were entitled to the specific backyard areas. But, unfortunately, there were no fences. 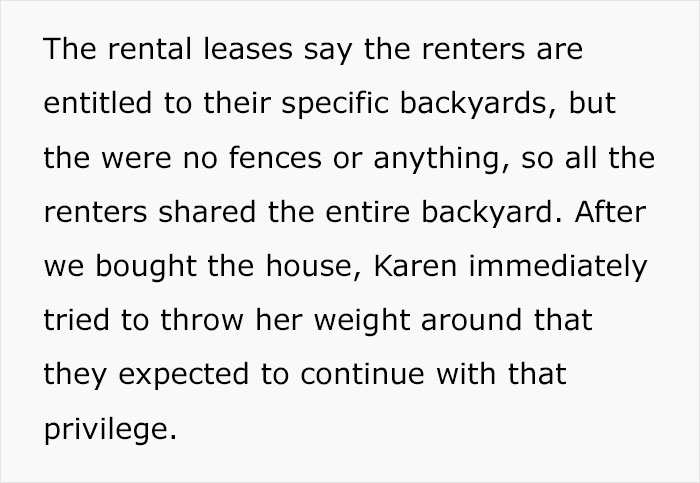 If Karen asked nicely, the couple might accommodate her.

Karen wanted to throw a party for her kid’s birthday but she had no access to the backyard. 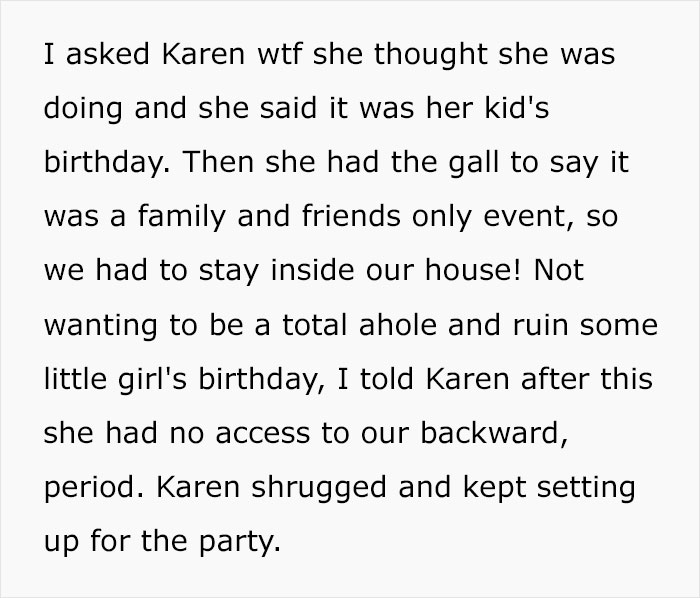 A drunken old man wandered into their home during the party. 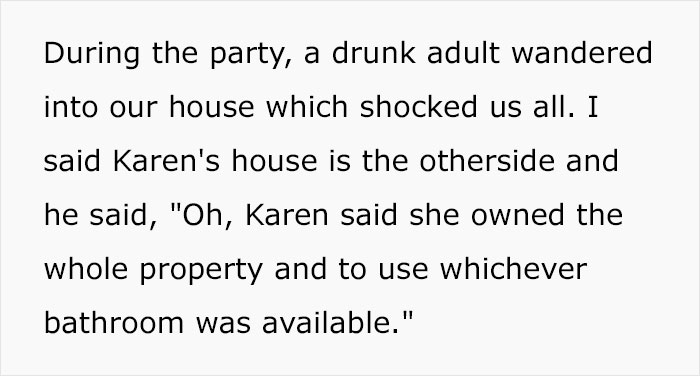 When the elderly man was directed to Karen’s house by the couple, she came back like a storm. 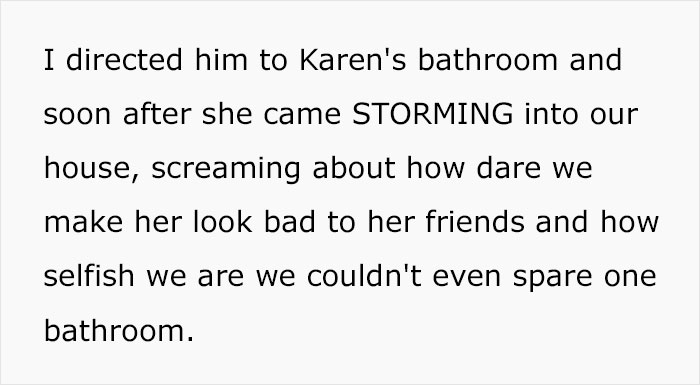 When the woman asked Karen to get out of their house, she left and the party was wrapped up.

After the party incident, the couple decided to remodel the backyard. 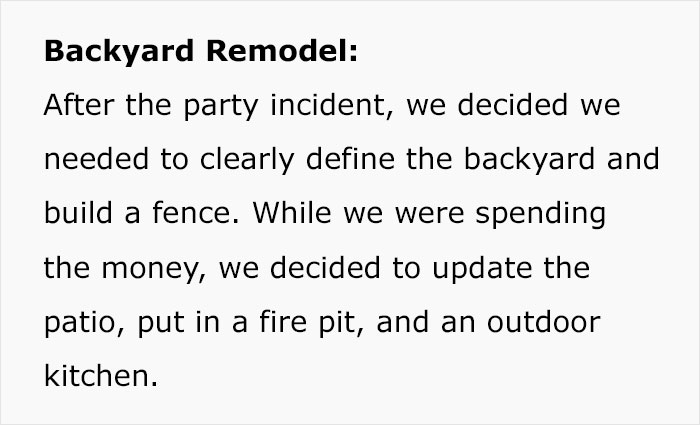 When Karen investigated the fences, her face lit up with rage. 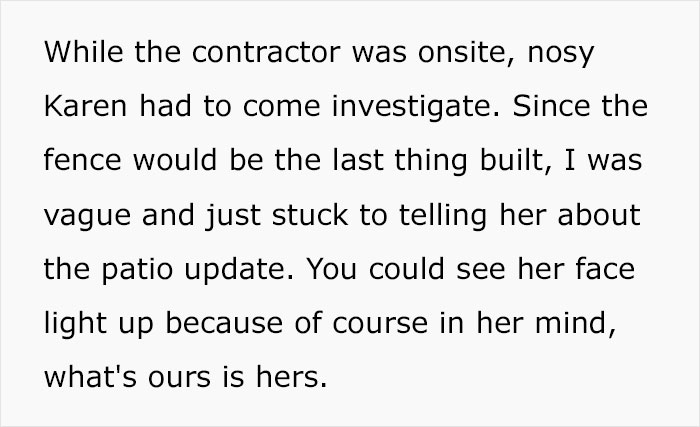 While the workers were working on the fence, Karen asked them to stop. But, when the couple asked the worker to keep working, Karen called the cops. 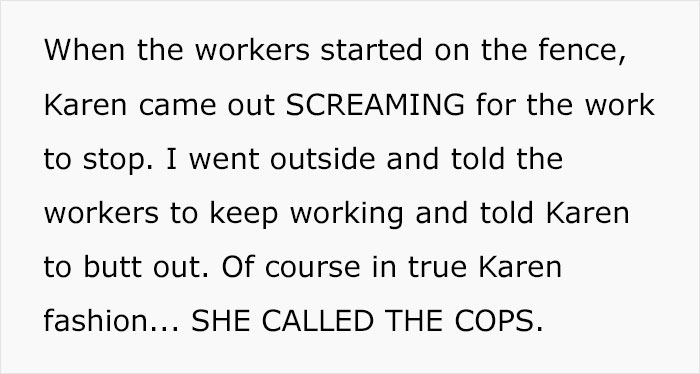 What happened next was hilarious. 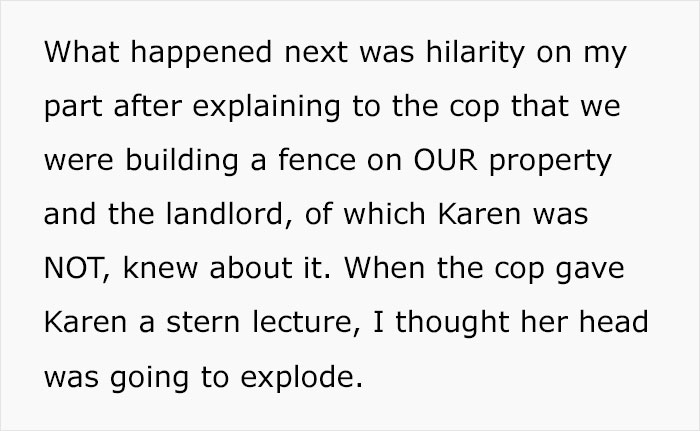 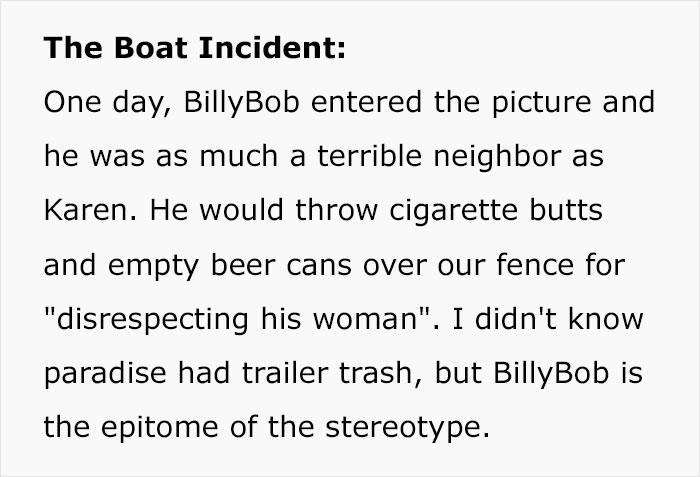 The couple rent out their dockage spot. 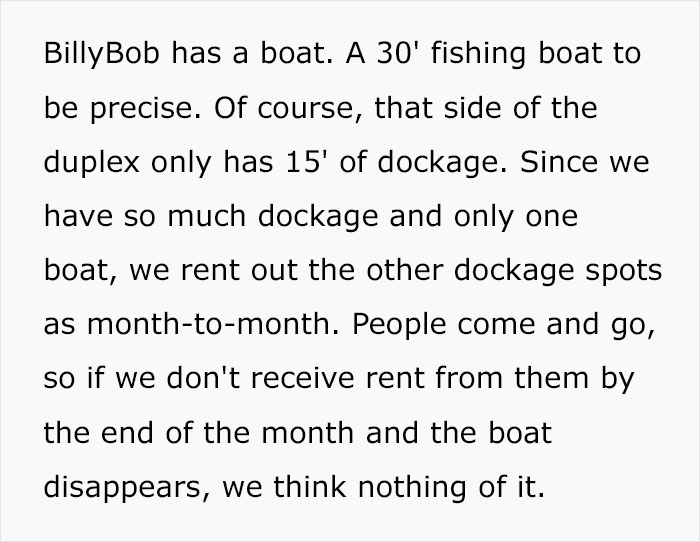 BillyBob – Karen’s boyfriend, wanted to park his boat on the dockage. 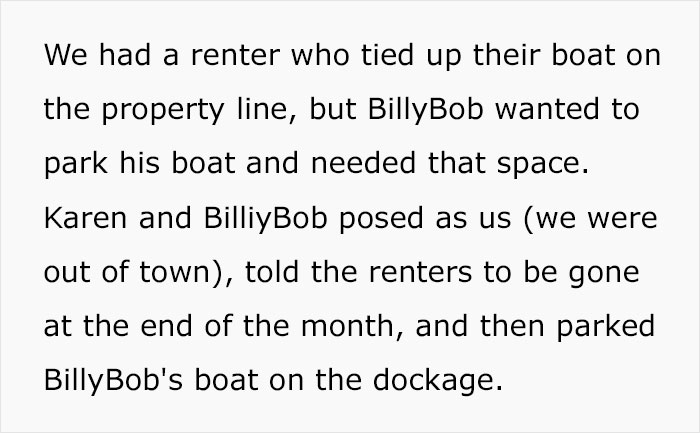 The couple came to know about the nasty review their renter gave them on their site. Later, the couple called the COPS. 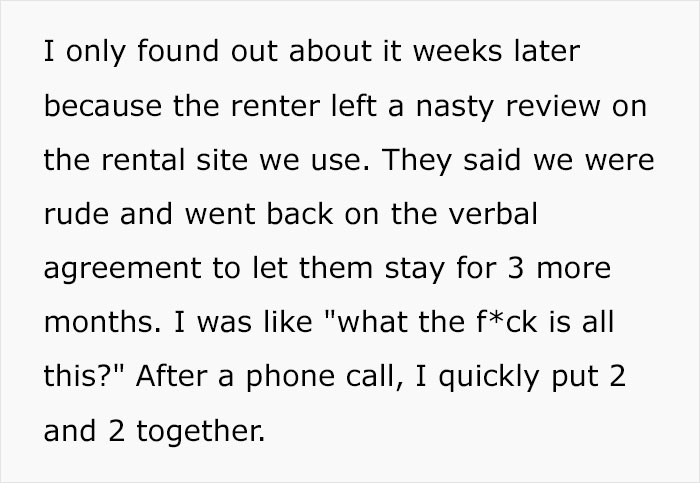 The cops asked BillyBob and Karen to move their boat.

When the couple asked them to move their boat, both Karen and her boyfriend started screaming. 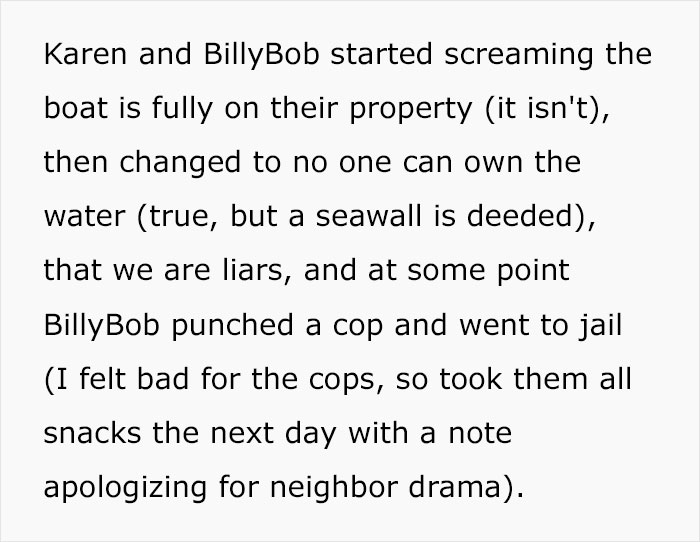 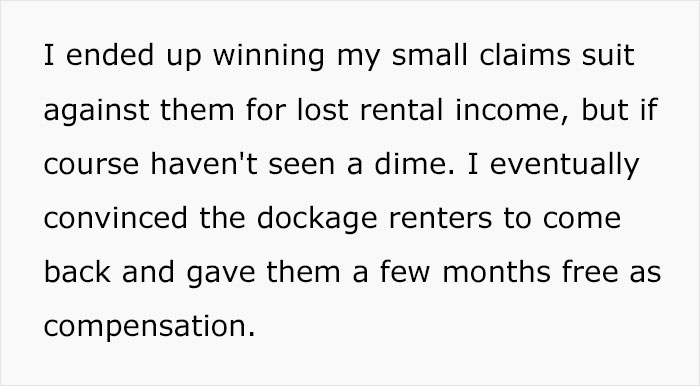 It’s time for the final revenge!

The couple wanted to invest their savings. 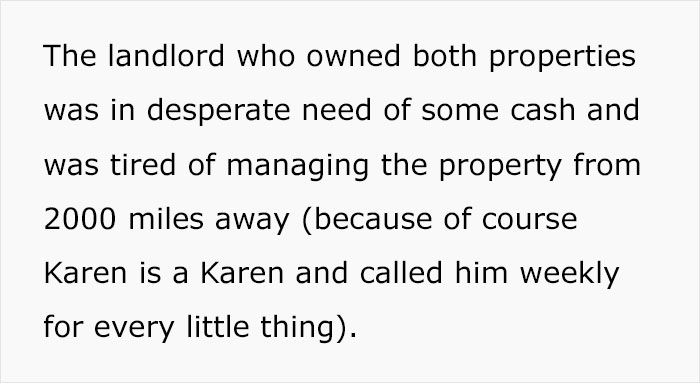 The couple decided to reinvest their money in purchasing the Duplex. 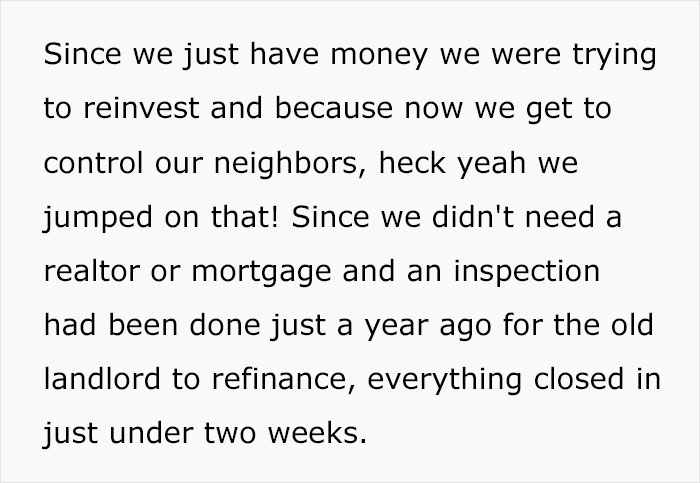 It was a surprise for Karen, as she was aware of the ownership changes, but she didn’t know who will be the new landlord. 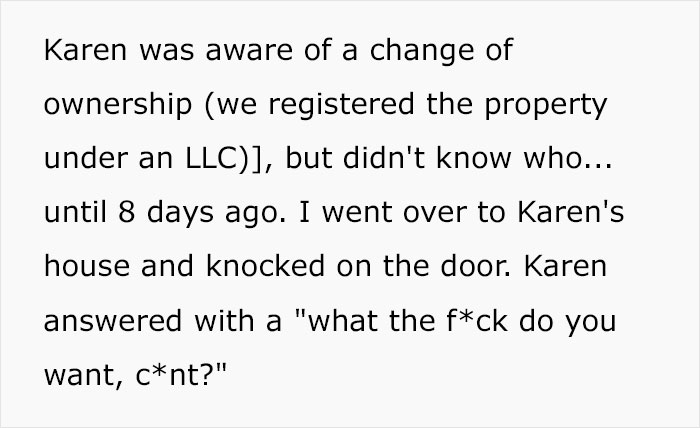 When Karen found out about her new landlord, her face turned white. 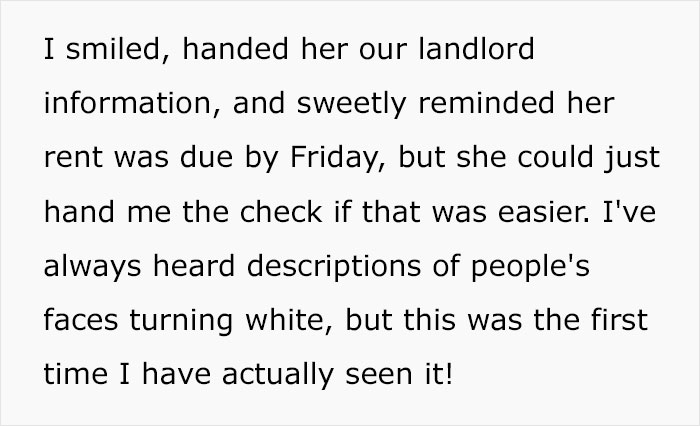 Finally, the couple asked Karen to make plans to move out. “Bye B**ch” 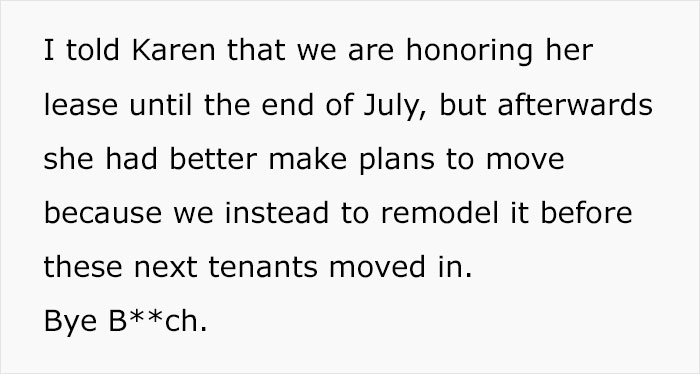 Many people misunderstood the whole story, so the Reddit user u/Unique_username504 made some clarifications: “Let’s call our side of the duplex, Duplex OP. The other duplex is Duplex Karen,”.

The writer stated: “We purchased Duplex OP. After we bought it, Duplex OP was no longer a rental. Both Duplex OP and Duplex Karen were for sale independently, but we only had the money to buy Duplex OP. Duplex Karen is still a rental because it has never sold.”

Things seemed to be going well at first. Karen had paid her rent on time and was not looking for a new place at the time. The couple were not renewing the lease, so they proposed that if Karen go early, they wouldn’t ask her to pay the termination.

The Redditor said: “Beyond the near-weekly loud parties and having to call the police because the kids were throwing lit fireworks at our boat, not much beyond the norm,”

At the end of July 2020, the lease was due to expire. But in the month of August, u/Unique username504 shared another update.

She wrote: “Long story short, Karen and family are still in the place and not paying any rent,”

“They were served with eviction, but due to COVID stuff, we can’t actually do anything about it. At least Karen and BillyBob had a giant fight which ended up in him being arrested and he hasn’t returned.”

“I’ve been told by our lawyer, once some laws are changed/removed in September, we can have the police escort them off the property that day since we’ve already filed the eviction. It’s just a sh**show right now.”

“Karen is being extra smug. She tried to push her bounds and kept coming over to our property. A talk with the cops set her straight, but she’s playing music loud and just tossing her trash everywhere.”

“We really wanted to move our elderly parents in after a quick remodel because dad needs shoulder surgery badly and mom now needs a walker. They need more care and it’s getting harder driving two hours a day to do that. Our parents want their own space though and won’t live on our side with us. My husband and I are trying not to be angry and make things worse with Karen, but we are both exhausted. Things just suck.”

Later, in December same year, the couple shared another update:

The Reddit user shared: “Karen is still here. Since we couldn’t evict her, my partner went to stay with their parents for a few months so in-laws could get the surgery/care they needed. They are doing better now which is great,”

u/Unique_username504 explained: “Here’s the weird part though. In October, Karen’s mother, Susan, came to live with her since Susan’s landlord chose not to renew her lease.” Susan was like “an angel”. She was “mortified” at Karen’s behavior.

“Susan is a tough one and has been cleaning house (both figuratively and literally). The kids are so much better behaved and Karen stomps around like a sullen child.”

“Susan and I share drinks every few days in the backyard. We bake together too every weekend. For Thanksgiving and Christmas, since no one was traveling for the holidays, we made a big feast and set it up outside with some backyard games. It was a great time and even Karen was being pleasant.”

However, the Reddit writer u/Unique_username504, told Susan not to worry about rent till they find a good place to live. Still, she insisted to pay. The writer said: “I lied about how much the rent was so it’s only a half payment, but it just covers the taxes and insurance. We drew up another lease that is month-to-month.”

The writer said Susan had a desire to return to the family and bring her daughter with her. Also, the user u/Unique username504 thought Karen was ready for a change, but due to COVID, she figured out it will take some time.

The woman wrote, “It’s very comfortable right now, so I’m not in a rush for them to leave.” Since then, the Redditor hasn’t posted any new information or updates on the story.

Many people supported the writer and were glad to see that Karen received justice and got what she deserved. Let’s have a look at the comments.

What are your thoughts on this story? Pour in your suggestions to Karen in the comment section below.