We are back with another episode of Reddit’s AITA thread.

As usual, before proceeding, we would like to welcome our old and new readers and would like to give an overview to our new readers what the AITA thread is about. AITA (Am I The A-Hole) is a famous Reddit’s thread where an individual would seek suggestions and approvals of other people whenever he/she is caught into a situation where it’s difficult for him/her to judge whether what he/she did was right or wrong. The best thing about this thread is a majority of people would stay neutral while giving a suggestion which the individual can act upon, depending on his choice, of course!

Some matters are hilarious, some are weird while some are really serious. In today’s episode of AITA, a guy was caught into a very tricky situation where he was unsure what to do and decided to seek for people’s suggestions. The overview of the story is, the guy’s sister recently revealed her identity to her immediate family and accepted that she’s a trans. However, the guy’s wedding is coming up and he doesn’t want his extended family to know about this as they would bully or disrespect his sister and also, a lot of people wouldn’t support it. So, he told her sister to dress up as a man and she got upset and now he’s unsure whether it was the right move or not.

A very tricky situation, indeed. Now, let’s go and check out the original post and then we can see how did people respond to it. Keep scrolling to let the story begin! 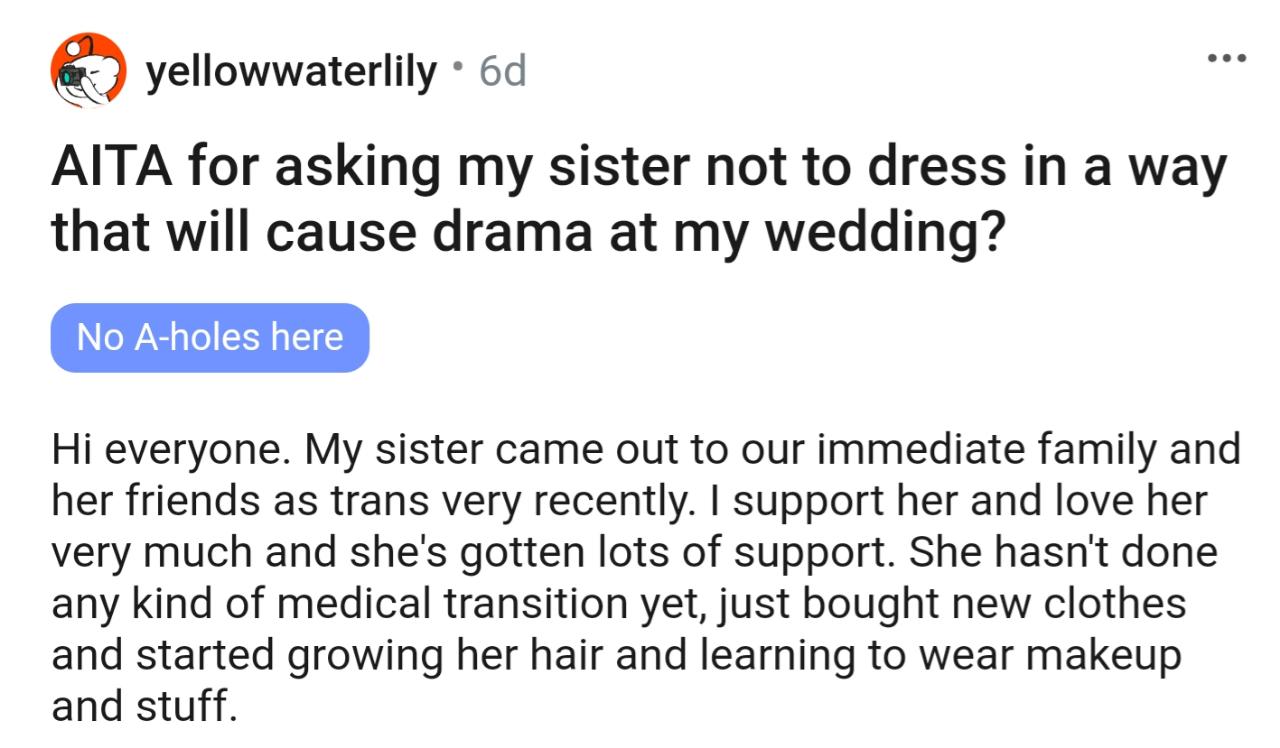 Well, it’s very brave of her to accept it in front of everyone. It’s certainly not easy!

2. Of course, she’d definitely be impatient about the wedding as it’s her brother’s wedding!

Imagine how excited she would be!

This problem lies all across the universe. People just wouldn’t stop poking their nose into the matters of others!

4. For starters, that is selfish.

But the situation is also understandable if we look at it, neutrally.

5. Ah… imagine all her excitement going to waste…

That’s just sad. Really really sad. Why is it that everytime we have to care about what the world thinks. And why does the world has to interfere into people’s lives. Finally when she decided to open about her sexuality to her family, this is what happens. Her brother has a legitimate point to some extent but that certainly won’t ruin his wedding. People talk, they forget. You cannot hurt your sister like that. He should be more considerate about it rather than caring about what people might talk or say.

It’s understandable if the OP is stressing about his sister being harrassed or bullied, but what good brother are you if you can’t stand up for your own sister? Why welcome such guests at the wedding where his own sister has to hide her sexuality. Eventually, it’s going to open up either ways and people will still talk the same. However, let’s go ahead and see what people had to say about this and what were their opinions or reactions to this post. Scroll down to see. 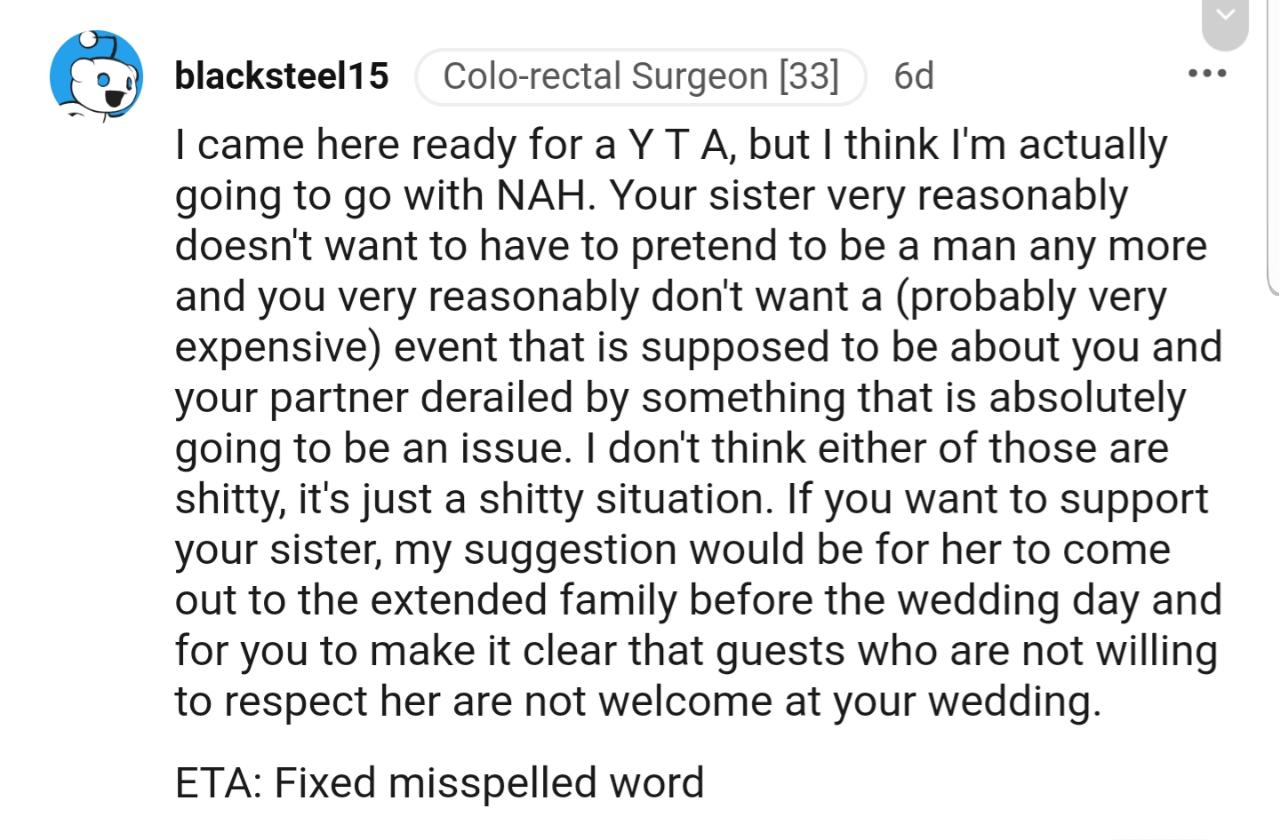 Well, this guy had a different opinion about it. 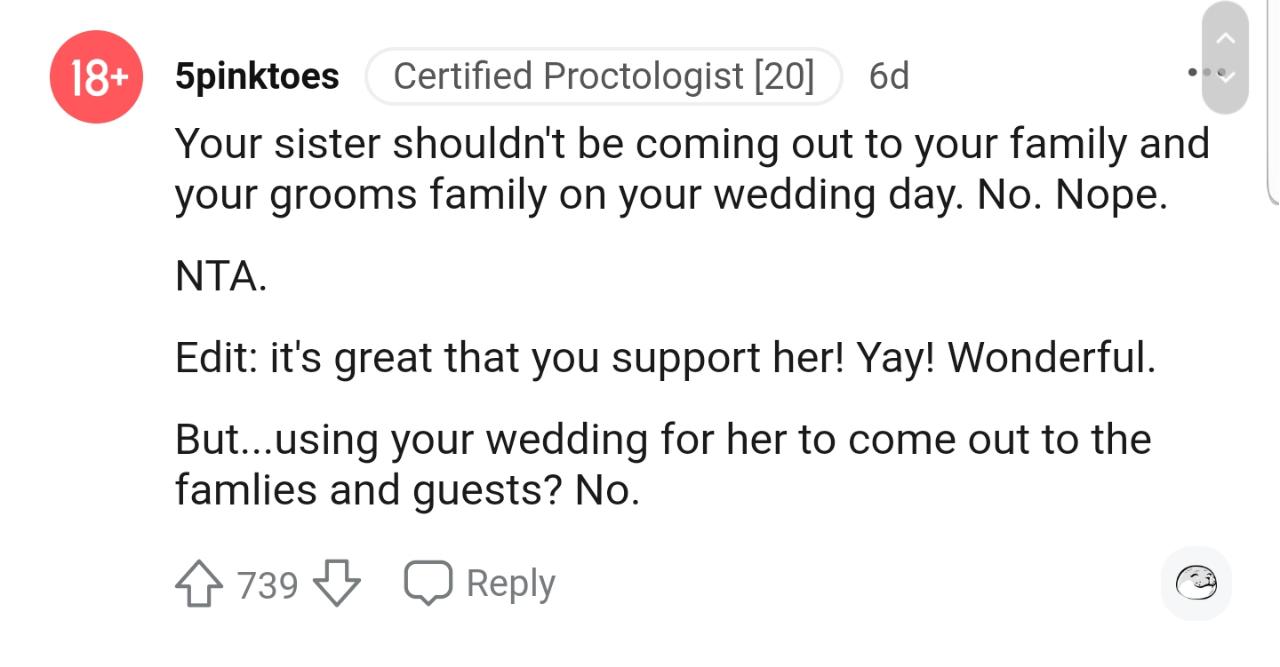 Here’s an interesting view from a trans who had been into a similar situation before! 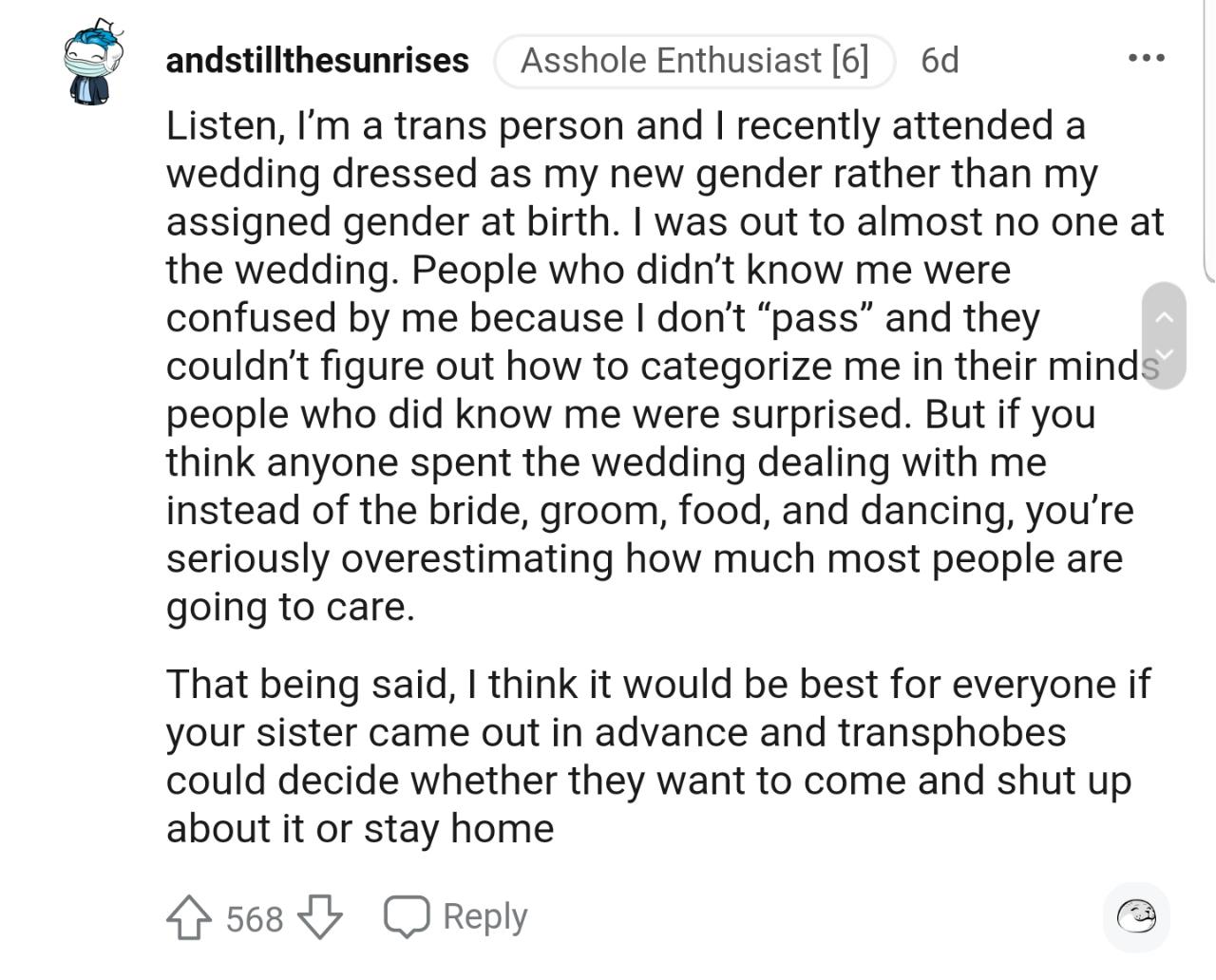 This is absolutely true! You need to pick the people carefully or you will end up pleasing them your whole life. 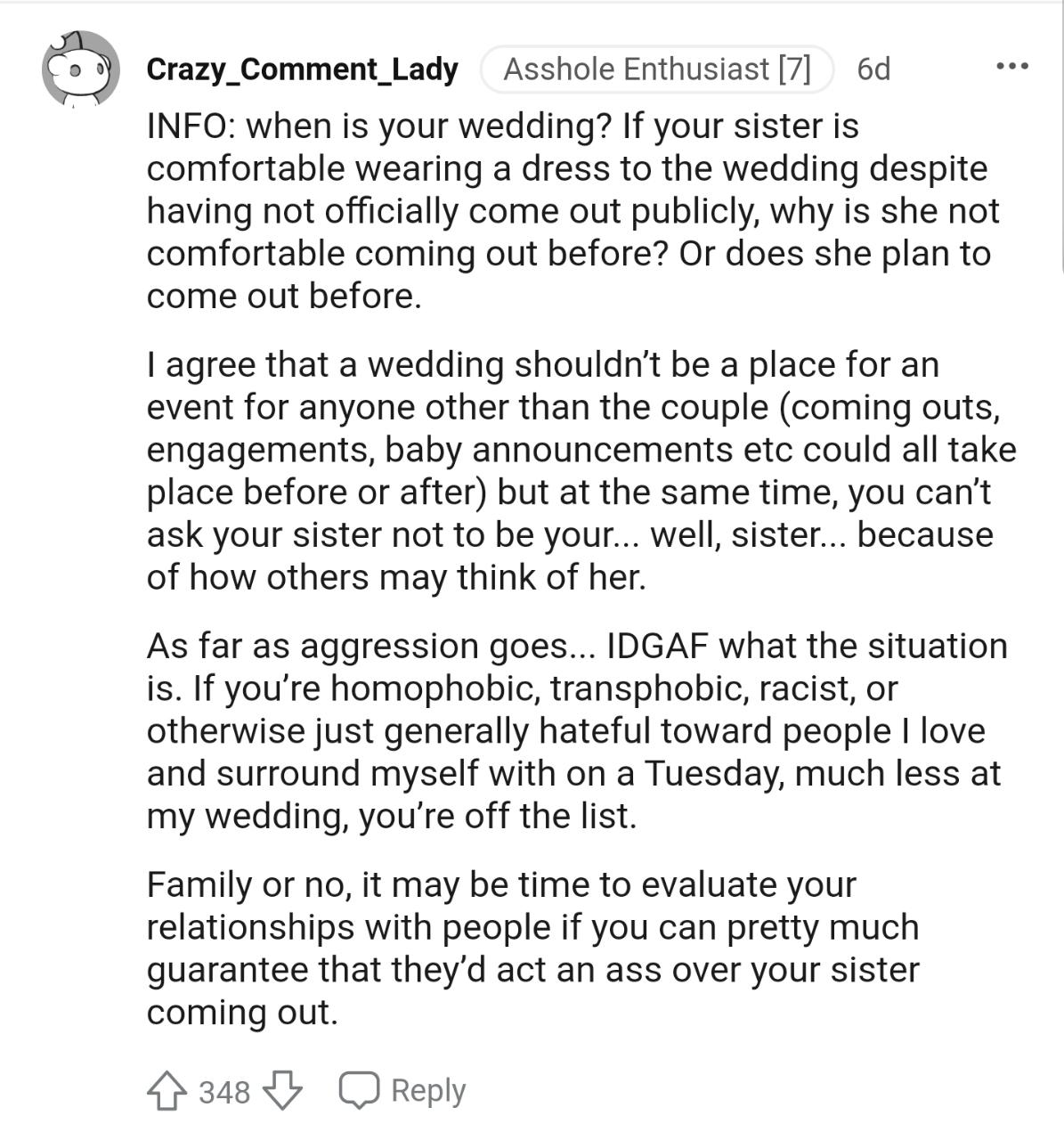 Well, this one had a straight opinion.

He’s got a very valid point! The OP shouldn’t be selfish about it. 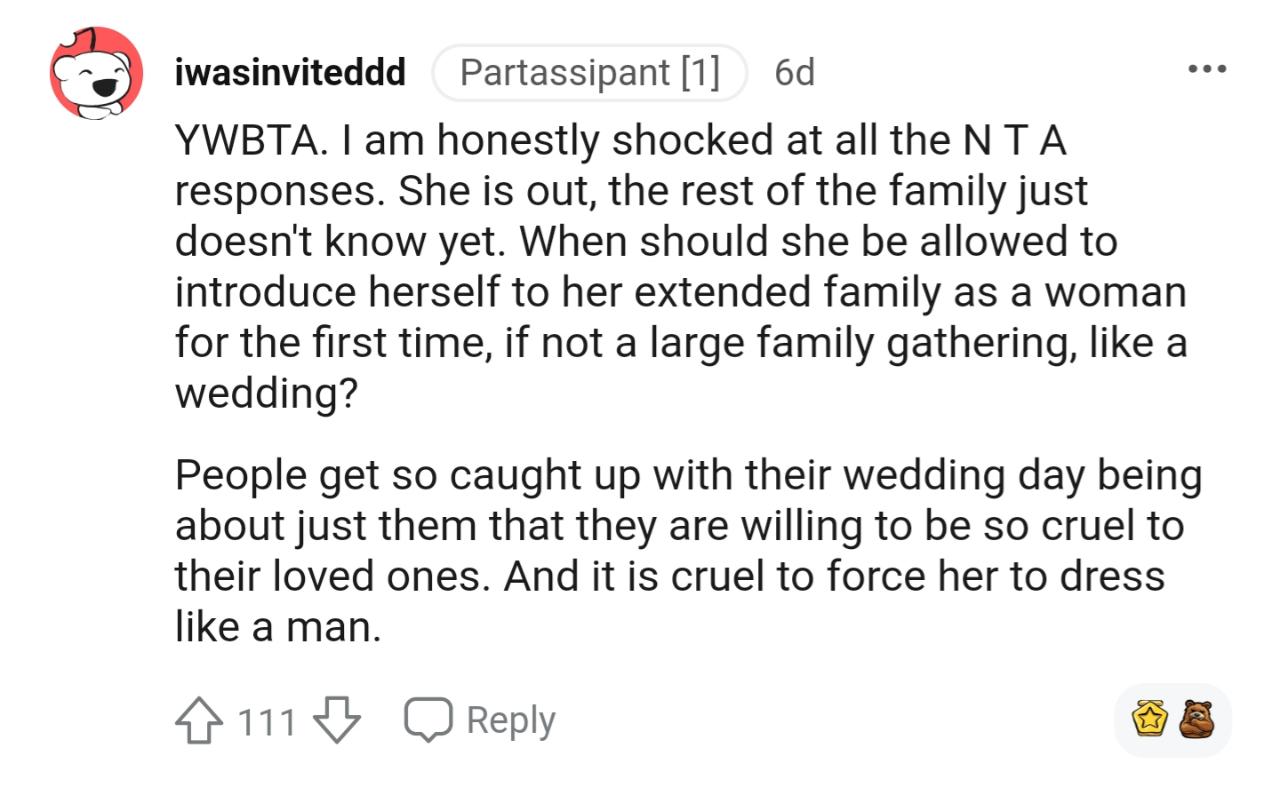 Yep, the OP can only begin to imagine what it would be like but being in their shoes is a whole another story!

So, after listening what the people had to say, the OP edited his comment and thanked the people while changing his opinion about it. Gladly, now he’s gonna work on it rather than asking her to dress like a man! 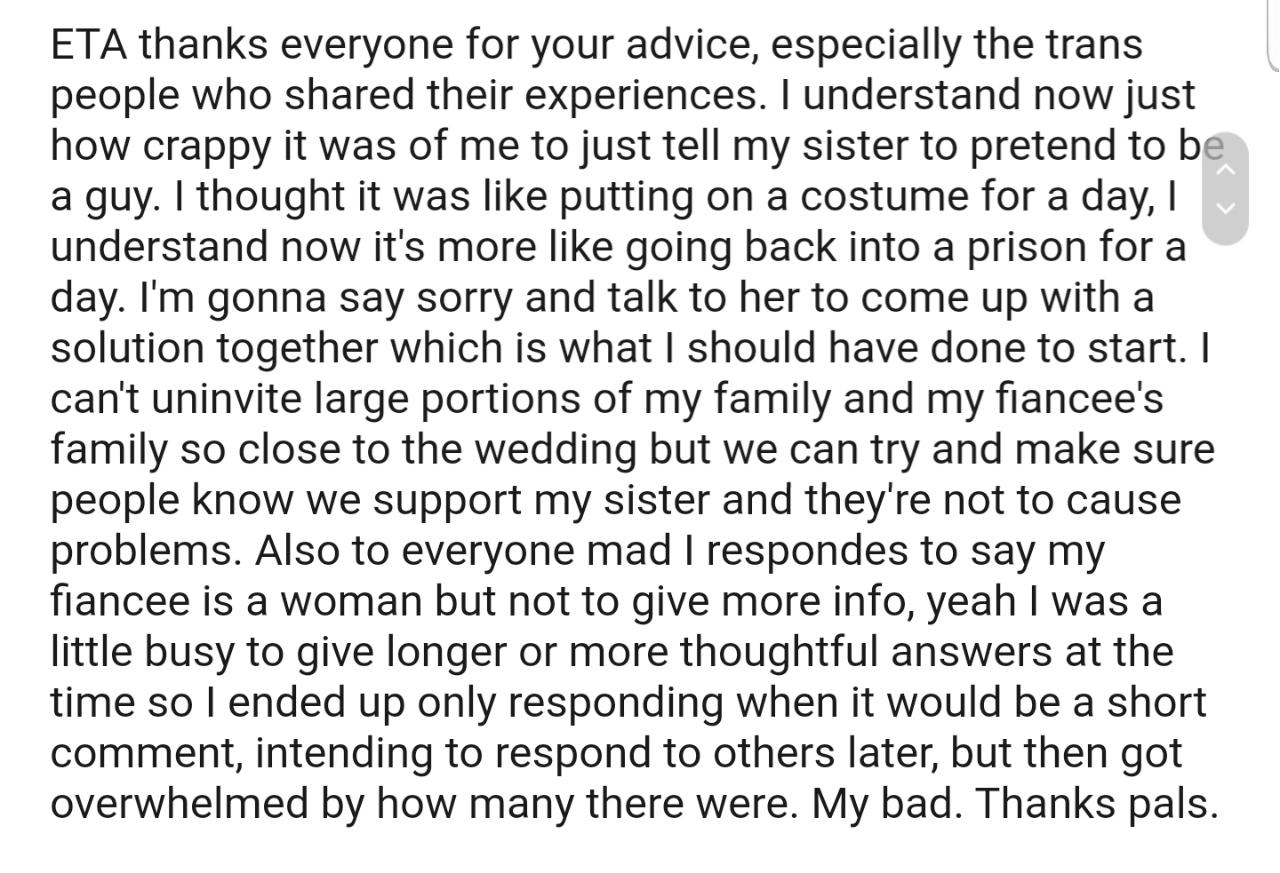 Oh well, that was sort of a tricky situation indeed but also, this is the time where you decide what do you care about. Is it your family over people or is it going to be people over family. Everyone has their own perspective and it’s only a matter of choice. Lastly, we would like to know your opinion on this as well. Feel free to write it down into the comments section below!