Nobody should be pressured into anything.

I don’t understand why peer pressure even exists. If somebody doesn’t want to do something, we should let them be rather than forcing it on them. And this is all okay unless they are seriously hurting their health, and you are concerned about them. However, this story is different. You see apparently some people do ‘Dry January’ which means they don’t drink for a month which sounds alright to me. Some people don’t drink that much anyway, so it’s not a big change however, others do like an occasional drink and would rather not participate in this.

I mean it is their choice at the end of the day. However, this particular zoom group kept forcing this guy to join them. And when he declined, they implied that he might want to reassess his relationship with alcohol if he can’t even give it up for a month. It doesn’t sound like bad advice but can come off as passive aggressive, and he wasn’t far behind in replying with the same comment.

Honestly he is making a lot of assumptions right off the bat. 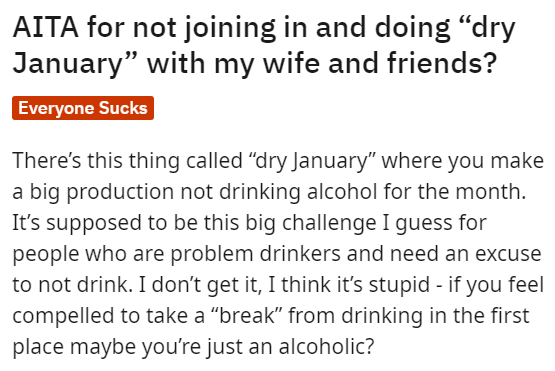 Not that they were any better when it comes to this sort of thing. 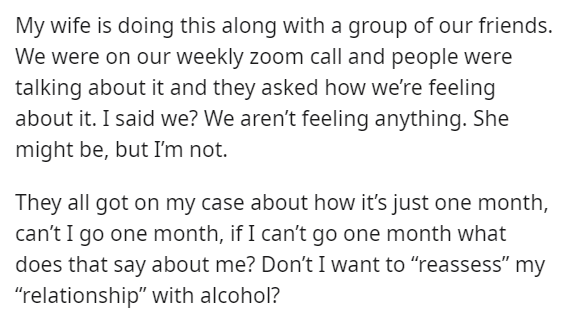 Although he is trying very hard to justify his actions.

But at the end of the day, if he doesn’t want to do it, it’s his choice. 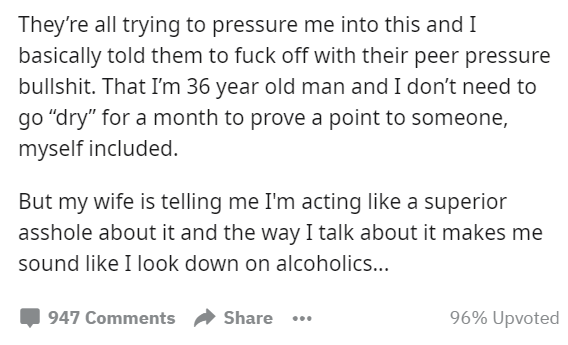 He is being a bit judgemental towards people who deal with alcohol problems. 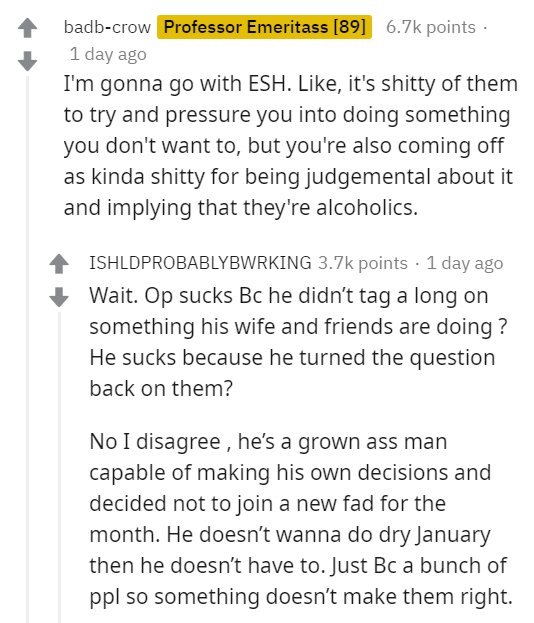 Ngl, I’m going to go with NTA. He didn’t originally say anything to them until they pushed the fact. I kind of agree with his reasoning though. If you have to force yourself to not drink for a month and make a big scene of it, there seems to be more with one’s relationship with alcohol. –Goody3333

However, they did start it first since he just didn’t want to do it. 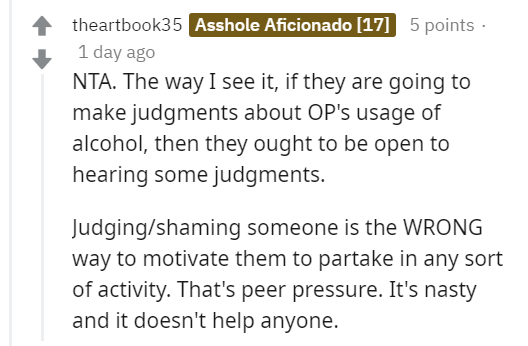 They should have just kept quiet and none of this would have happened. 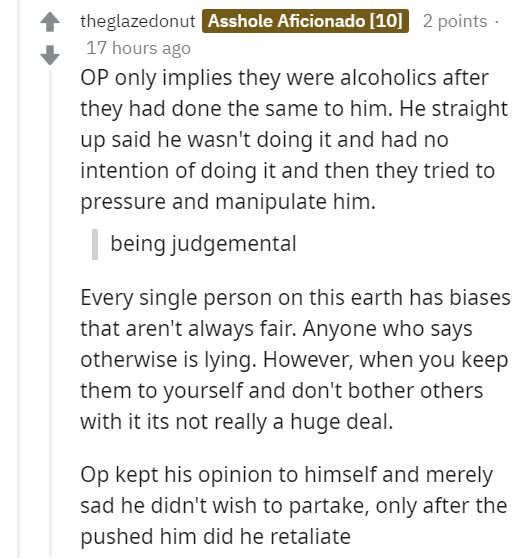 Many people do it for myriads of reasons. 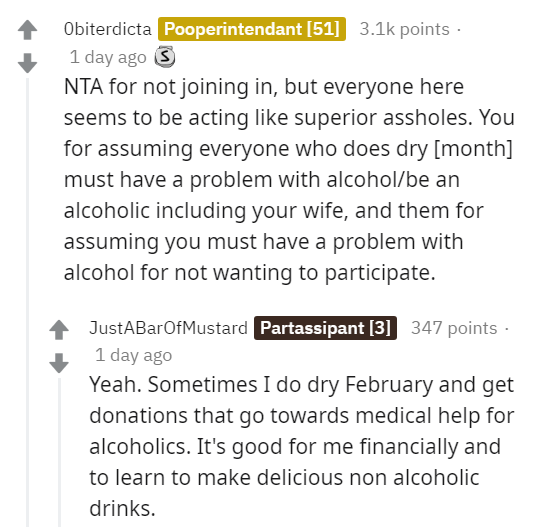 We shouldn’t judge why anyone does it. It is their personal life. 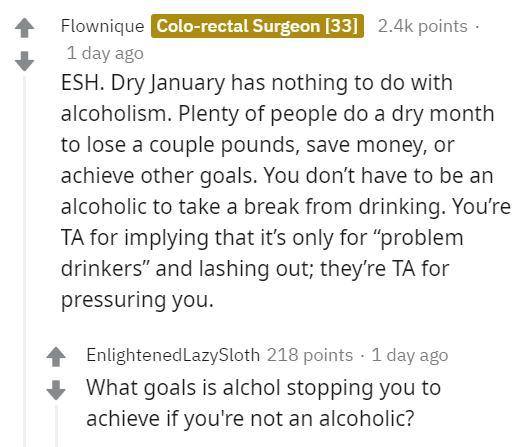 However, that is very true. You won’t notice a lot of change with only a month. 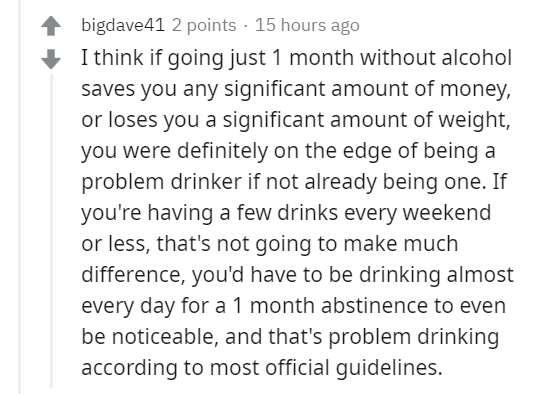 If you want to do something like this, you don’t have to tell everyone. 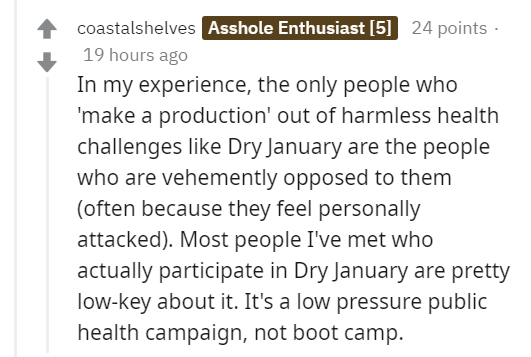 Eh, might be unpopular opinion, but I think he’s essentially right about these “X for a month” movements. I’ve been into digital minimalism and such for a while and every time I see someone do a “digital detox”, usually for a month, or minimalist for a month, or flip phone for a month, even if they manage the month and blog about how it always makes them feel so much more grounded and spiritual, blah blah, they never seem to permanently change their relationship with gadgets and social media. It ends up being a forgotten blog post in the end.

Like if you need to make a whole production out of how you’re SO free from a certain thing for a month, I highly doubt you’re as free as you think. I have a friend who ran a gym, and she said there are so many New Year’s resolution recruits who sign up for a whole year then never make it to February. Reminds me of that. I don’t know if I think he’s an asshole for raining on their parade, but I think he’s basically right about their relationship to alcohol. Maybe he’s an asshole. Maybe he isn’t. But I will note that they started this fight by implying he’s an alcoholic to begin with, asking him to think about his relationship with alcohol. That’s a ridiculously condescending thing to say.

Like, I’m a near teetotal who drinks occasionally to get the buzz with friends or my husband. Even if I weren’t pregnant, it’s highly likely I would have made it to February without touching a drop of alcohol. I would have outright refused to participate in such a thing even if I would pass with flying colours. Why put artificial restrictions on my life? What’s it doing for me? Is someone going to pay me in the end? No? Then I’m out. If someone decides to then imply I’m an alcoholic because I’m not participating, I might have let them know what I really think of this exercise, and what it says about THEM. –monarcho_capitalist

I had never heard of this before as well. 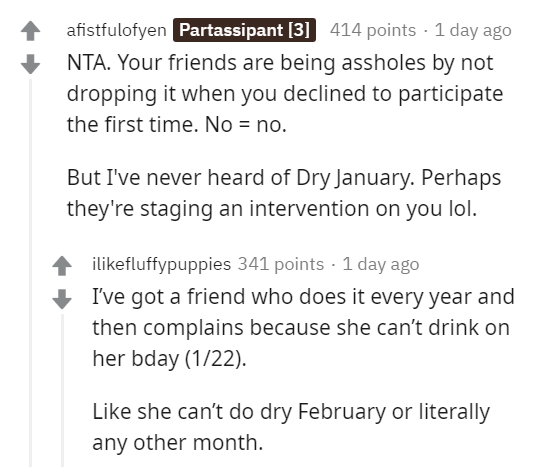 Do you think everyone was in the wrong in this situation? Comment down below and let us know.