Being autistic doesn’t absolve you of your rude behavior.

While I will never say I know a lot about autism and its spectrum. I would even go as far as to say, I know less than surface level but what I do know is that having autism doesn’t automatically make you a bully. It is true that many forms of autism mean you aren’t great at social interactions and can be generally slow when it comes to learning things but that doesn’t lead to bullying someone when they have repeatedly made it clear that you are being cruel.

And just because someone may be on the autism spectrum doesn’t mean everyone else should have to tiptoe around them as to not hurt their feelings. This sort of thinking should never be expected but we see time and time again, people being scared of standing their ground against a person with a mental health issue. When you are wrong, you are wrong, it really is as simple as that.

I am sure you can already tell who is the right one in this story. 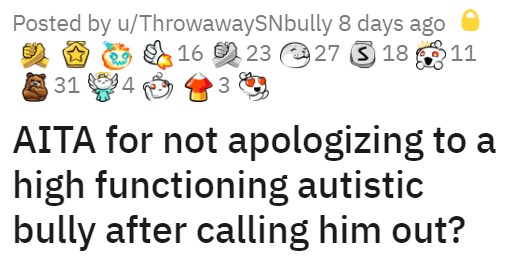 It seems to me he is using his autism as an excuse to get out of being responsible for his actions. 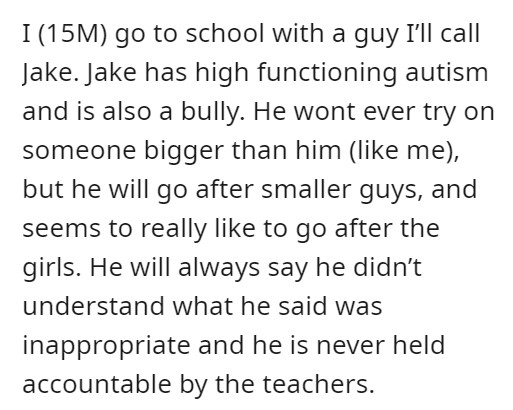 He did say he doesn’t understand before but what about when she explicitly told him to stop? 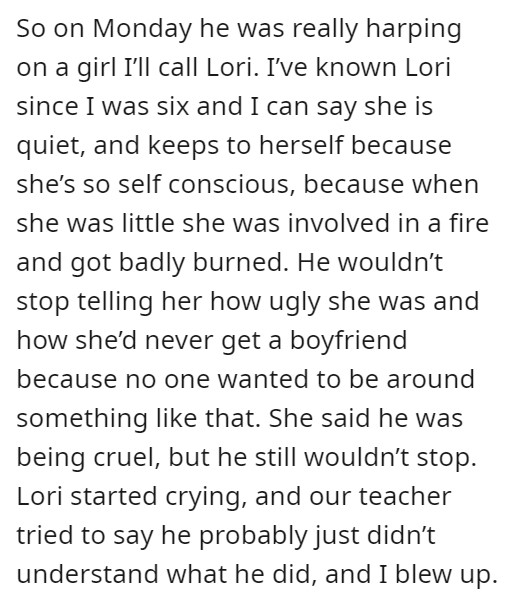 It is quite clear this wasn’t the first time and that everyone was getting tired of him. 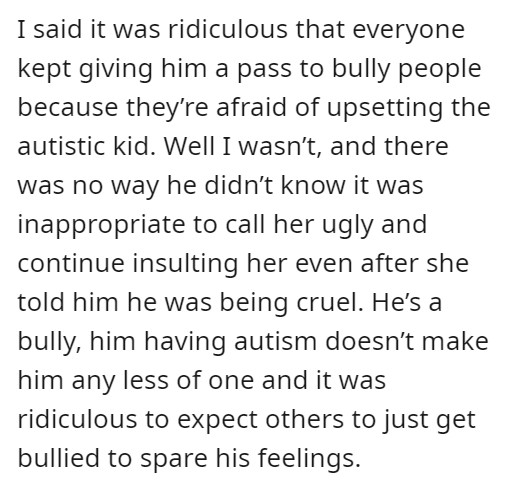 He ruined his own life, you had no part in that. 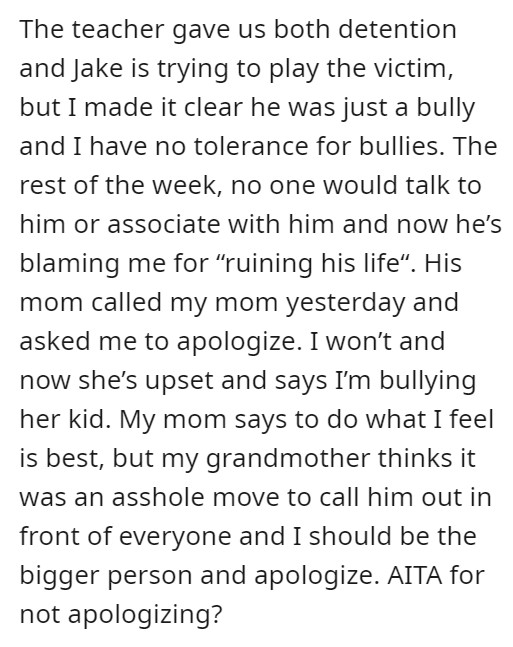 And I agree with you on everything you said. I’m an adult with Aspergers, and I’ve always had a knack for saying inappropriate stuff at the wrong time, but being cruel is a choice.

Not being an asshole is not fucking rocket science, and autistic people who use their condition as an excuse to be cruel are sh*t stains. –mariamus

You simply just stood up for what you believed in.

Exactly! Coddling his attitude won’t help him in the long run. 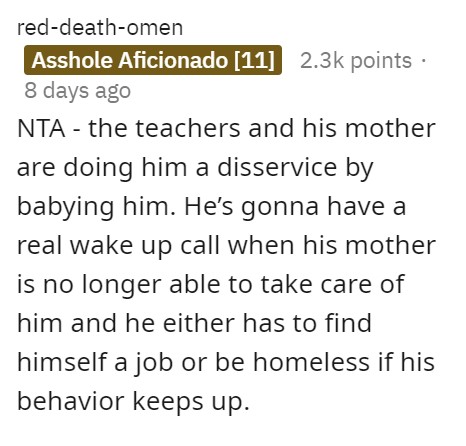 He did do the right thing and he should stop questioning himself. 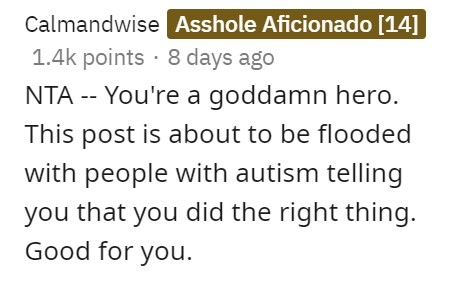 Every parent knows their child somewhat. She is just too ignorant to see it. 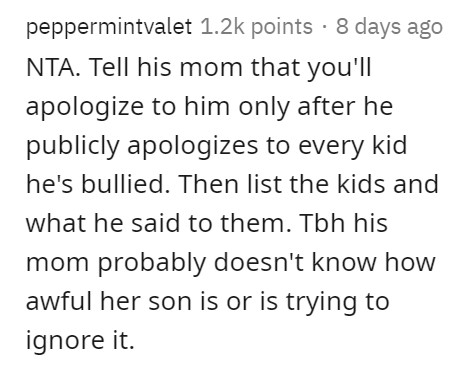 OP didn’t force anyone to stop talking to him. 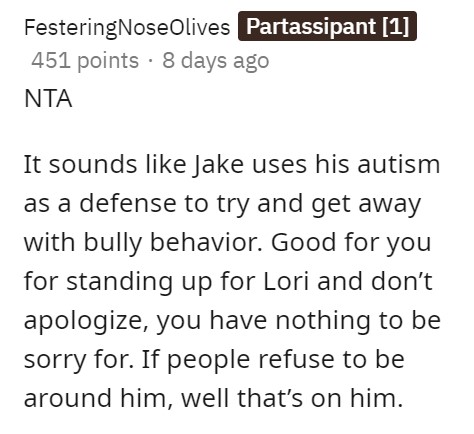 Not having a filter means that we may say something like “This shirt is bad.” “You have a blemish there.” We know for the most part the difference between saying something that we perceive and what is cruel. The girl with the burns, I’m pretty sure didn’t need to be told she has burn scars. Some of us are just weird and see things like art.

But some of us are cruel and will use the disorder as an excuse. We are human and still prone to human behavior. If kids aren’t held accountable for their actions, they learn that society will let them get away with everything and that is a huge disservice to them.

His mother demanded apologies, but she’s really not helping her kid. She’s setting him up to end up alone, hated, and with plenty of extra issues where he might end up unable to take care of himself. No employment, no home. So yeah. He can totally lay in the bed he made. –ThrowntoDiscard

And standing up for what you believe in is always the right thing to do. 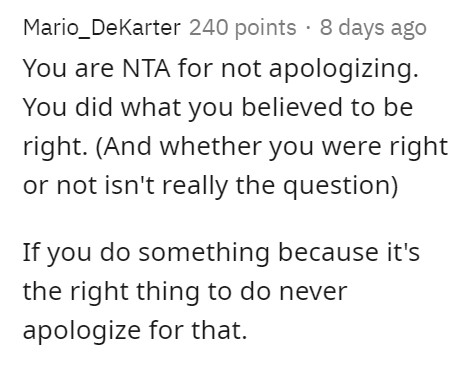 He was a bully. His condition doesn’t come into it. 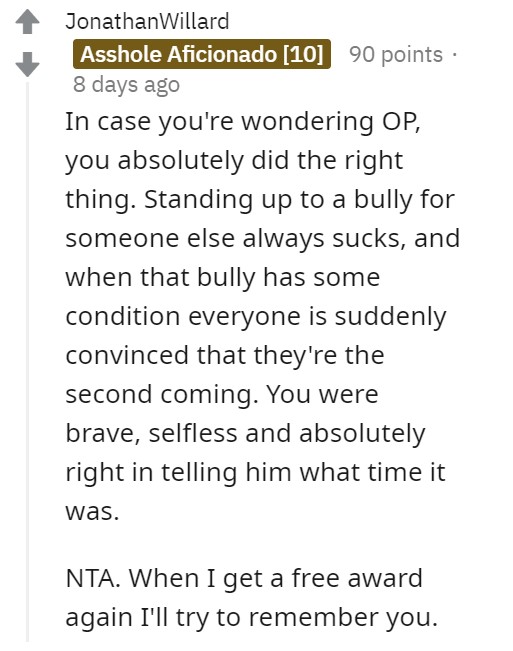 I am glad this didn’t go the way I was thinking it would. 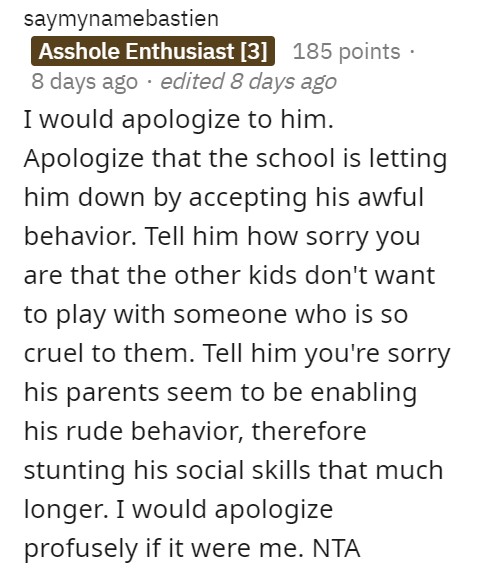 What are your thoughts on this? Do you think he should apologize? Let us know in the comments below.