Asbestos can cause serious health issues down the line.

That is why demolition people have to be extra careful when they realize they are dealing with asbestos. However, some only care about money and don’t really care about what will happen after they have completed their job. I understand that everyone needs to do their job but a little empathy goes a long way.

Although Keith has clearly never heard of that human emotion all his life. Because he was not only lazy when texting for asbestos but he also absolutely recked the neighbor’s roof and building while demolishing the house beside his. You can read the whole story by scrolling on below and take a look.

We are going to need this background information to understand what is happening in this story. 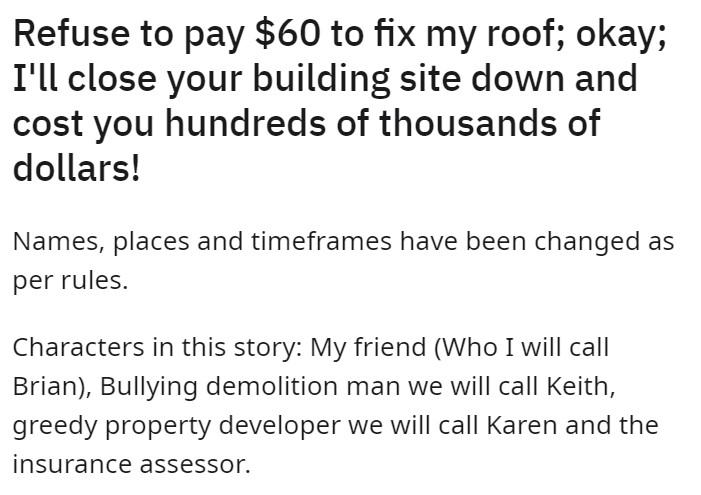 This is still ongoing but what we have got so far is absolutely perfect. 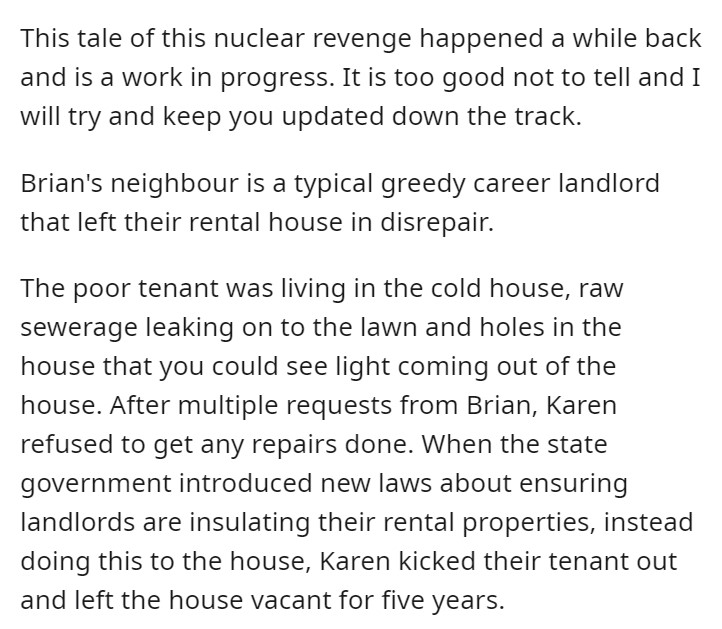 Keith and Karen sound like horrible landlords and horrible human beings as well. 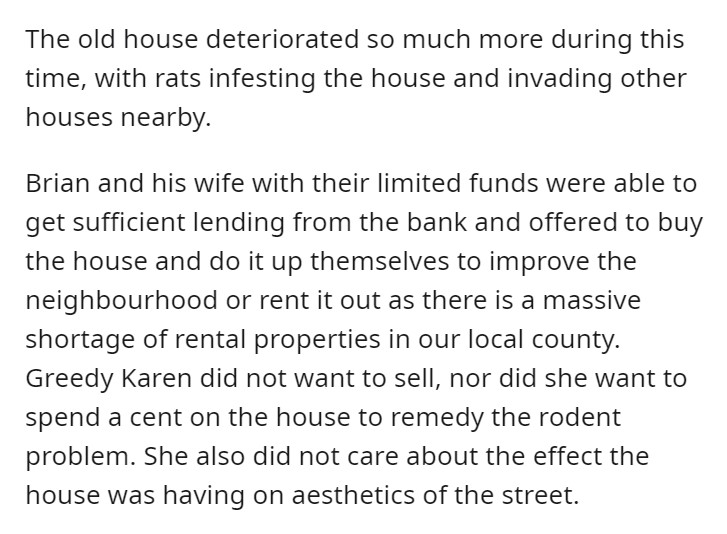 They are basically the usual rude landlords who only care about money and themselves. 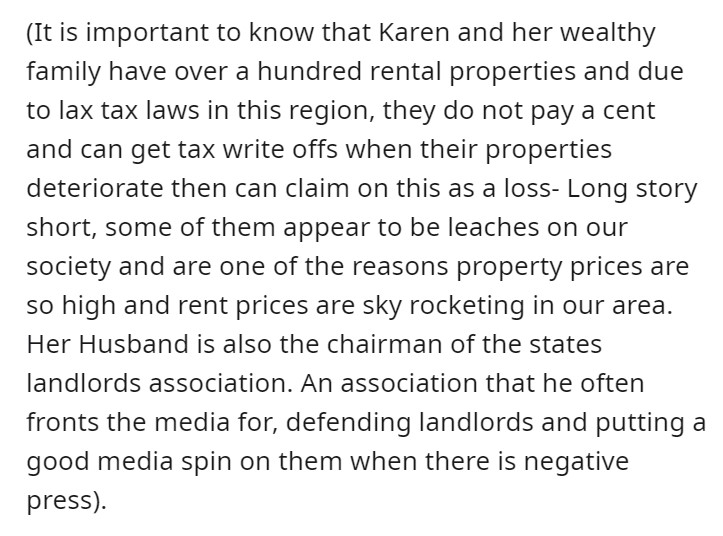 This is where things start to take a turn for the worst. 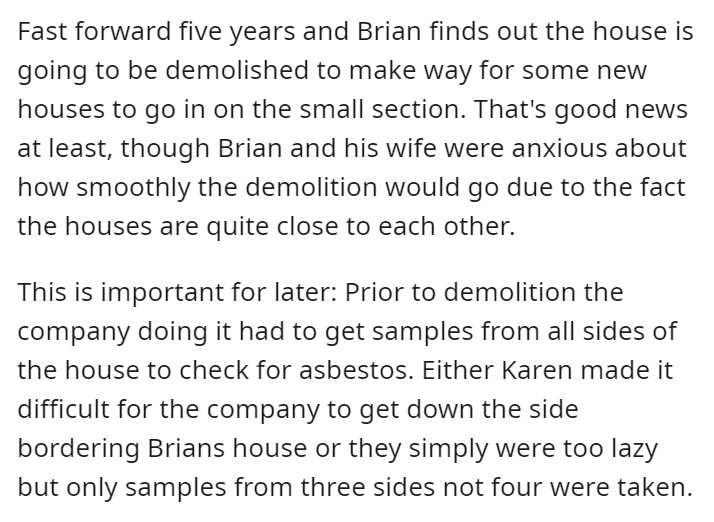 So Keith got to work destroying the house without proper safety measures. 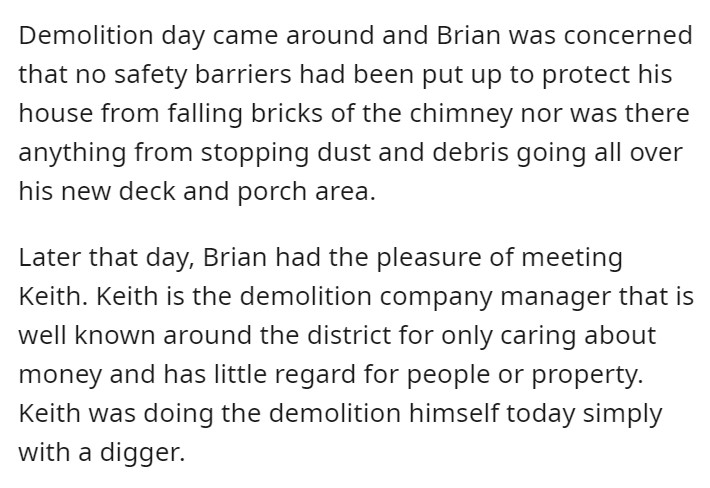 It seemed that Brians’s worst fears had come true and his roof was in shambles. 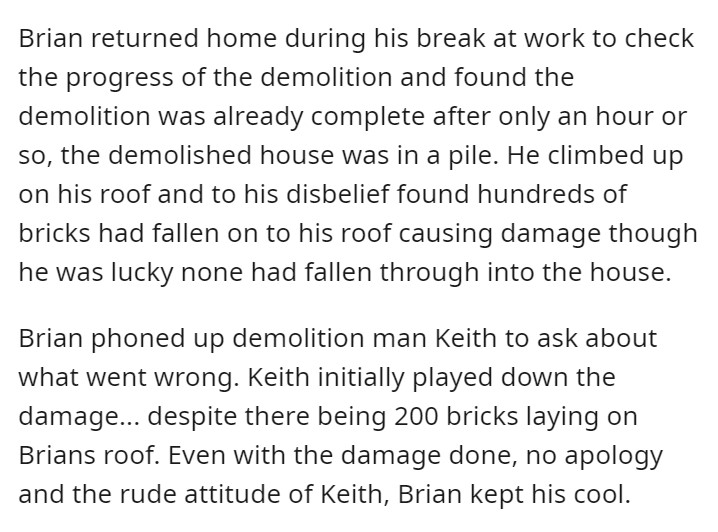 Brian even gave him an out and it would have been quite cheaper. 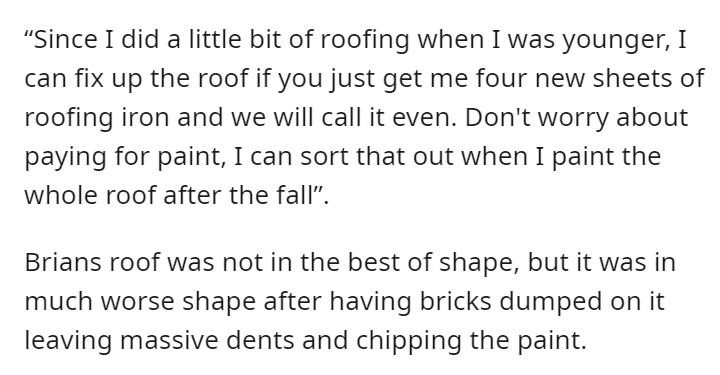 But he decided to decline this offer and I bet he regretted that later on.

Brian clearly didn’t set out to get revenge. 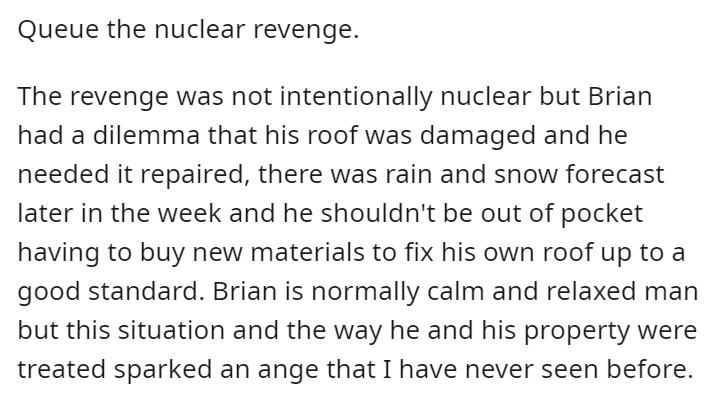 He just wanted his roof fixed and that was it.

But to make matters worse, there was asbestos around them.

If only they hadn’t been so lazy before. 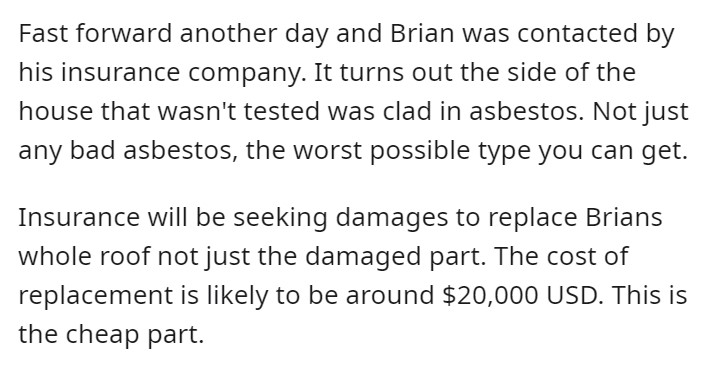 Exposure to any form of asbestos fiber is not good, the smaller, looser fibers (like in the dust) is more likely to be carried deep into the lungs. I would be very unhappy to be living next door to that, and I hope that all those involved in the demolition get financially hammered for it.

Fingers crossed for Brian and his family that they have the exposure probabilities in their favor and don’t have any issues in the future. –Safety_Chemist

Whoever it may be, they are going to have to fork up a lot of money. 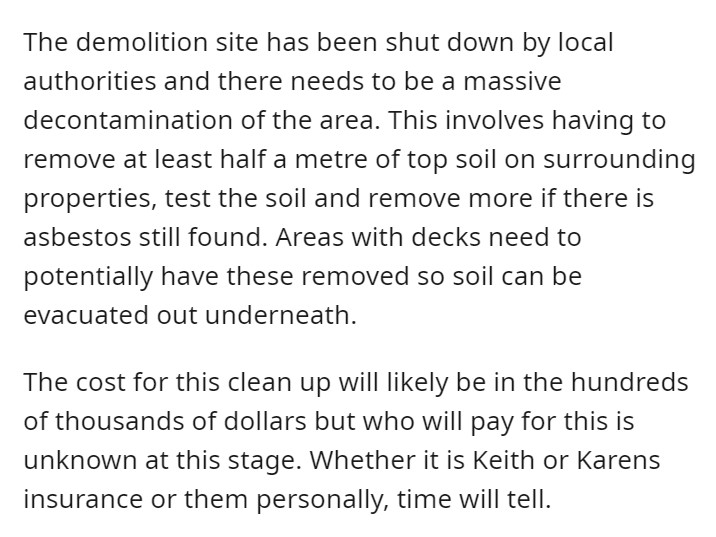 Keith and Karen clearly want to show that they are not in the wrong when they are. 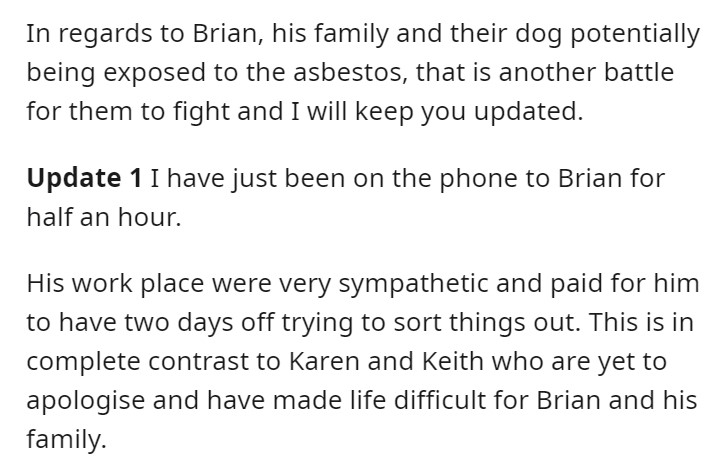 It was apparently Karen who decided she didn’t want to pay for a new roof. 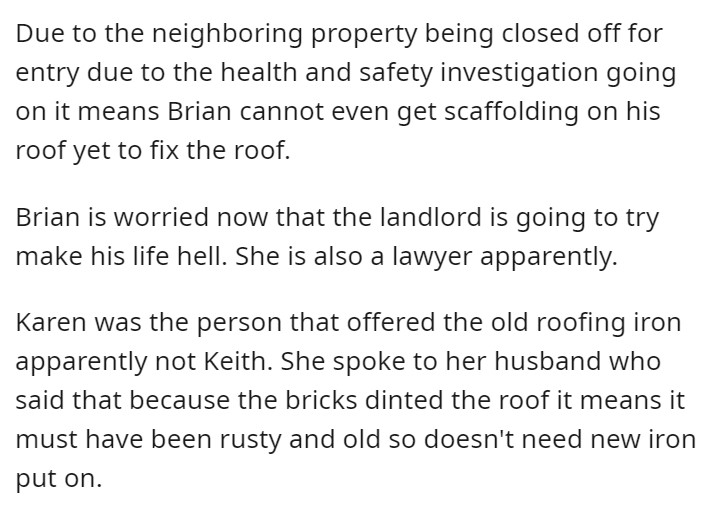 But Keith is obviously not without fault in this story. 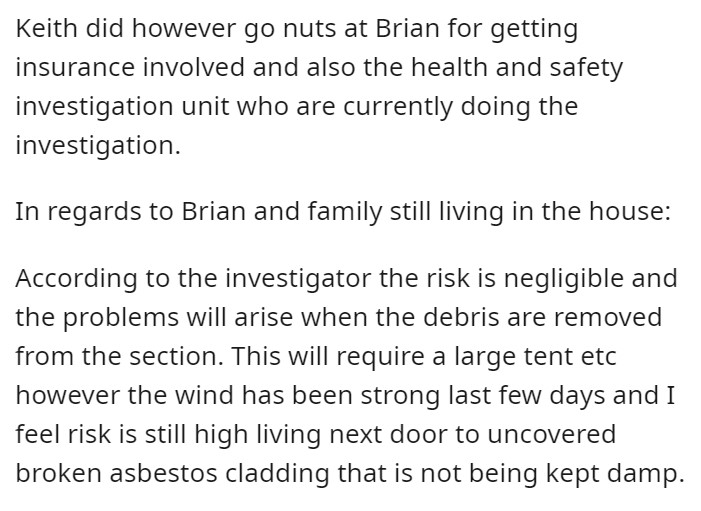 I don’t know if I am supposed to feel good by hearing this.

There are many things going concurrently that need to be fixed as well. 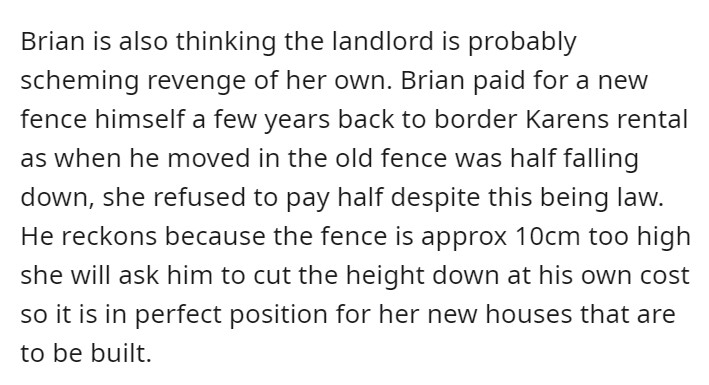 Keith needs to get in trouble as well for his lax safety measures. 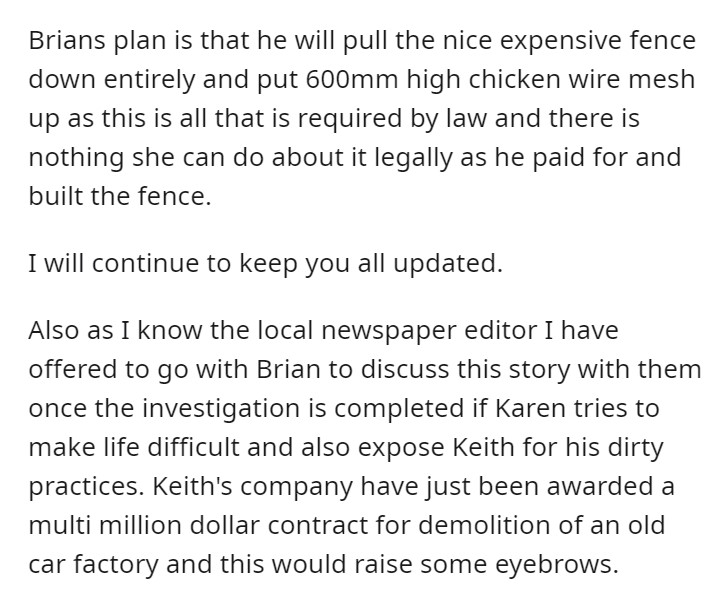 Asbestos and dodgy contractors go together.

At a company I worked for one of the old buildings on site was being demolished. We knew it had lots of asbestos in it because we used to work in it. It was a really expensive job and took months to arrange because of all the regulations around asbestos. Watching the builders we noticed they weren’t taking all the precautions we’d expect – no masks, no disposable overalls, nothing.

Our health and safety guy went over and found a bunch of foreign laborers were doing it, the main contractor had subcontracted to them but had told them it had been tested and wasn’t asbestos. Everything stopped dead and it all got sealed up again. A few months of court cases later the main contractor went bust. He deserved it. –anomalous_cowherd

We have a little more to go on now. 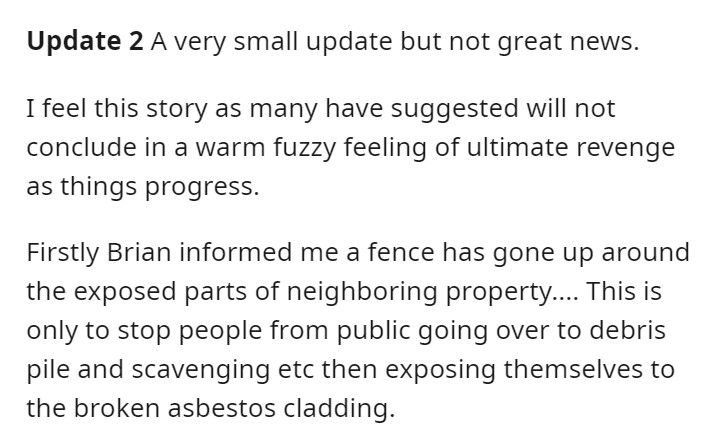 Things are far from over but hopefully, it ends up well for Brian. 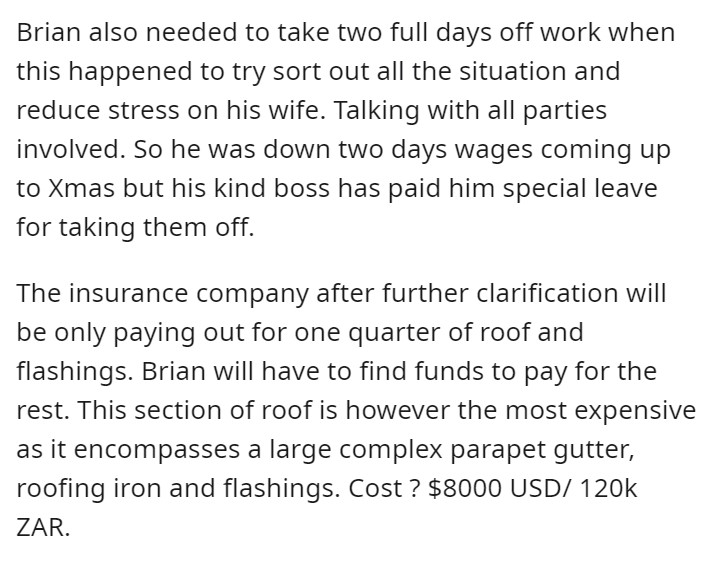 What would you have done in this situation? Comment down below and let us know how you think this will end.