Standing up to a teacher can be quite hard.

Especially if you are young and it’s your teacher. You would think teachers are there to help you and support you but many times that is not true. Sometimes they would rather speak out about their ‘opinions’ than keep themselves quiet. Don’t get me wrong, I understand that everyone had the right to free speech but that doesn’t mean you can argue with a kid. Whichever way you look at it, the adult can’t be the good guy in that scenario.

So when this teacher decided to share her views on gay relationships, she insulted the fact that a kid was getting adopted by two fathers. What is wrong with two fathers or two mothers? As long as a kid is getting adopted, I’d say that is a win-win situation. But this particular teacher didn’t think so and thought there was no point in being thankful.

However, there were some kids in that class who couldn’t stand for this injustice.

I don’t understand what the teacher got out of this. 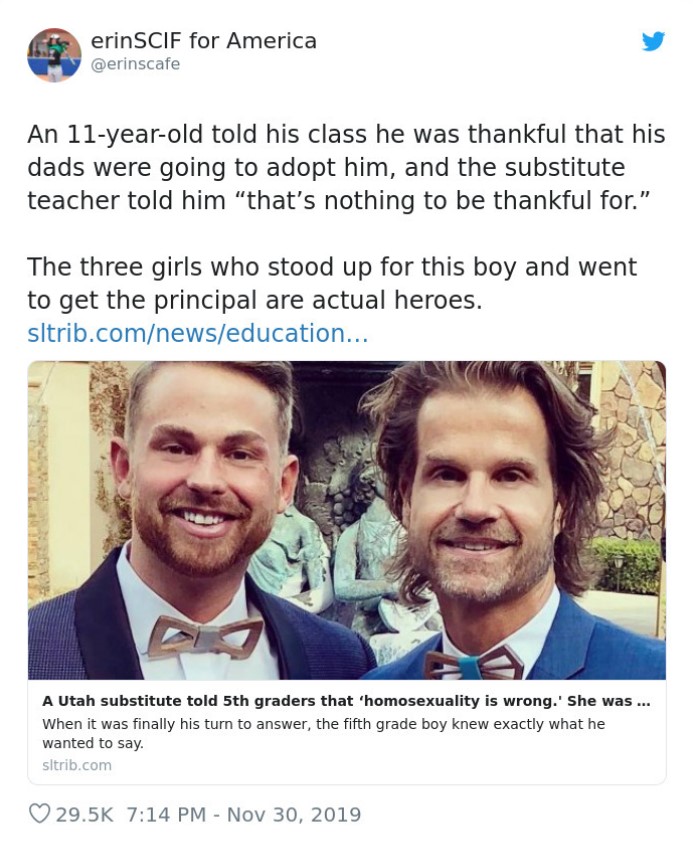 The saddest thing however is that the kid was scared of not being adopted. 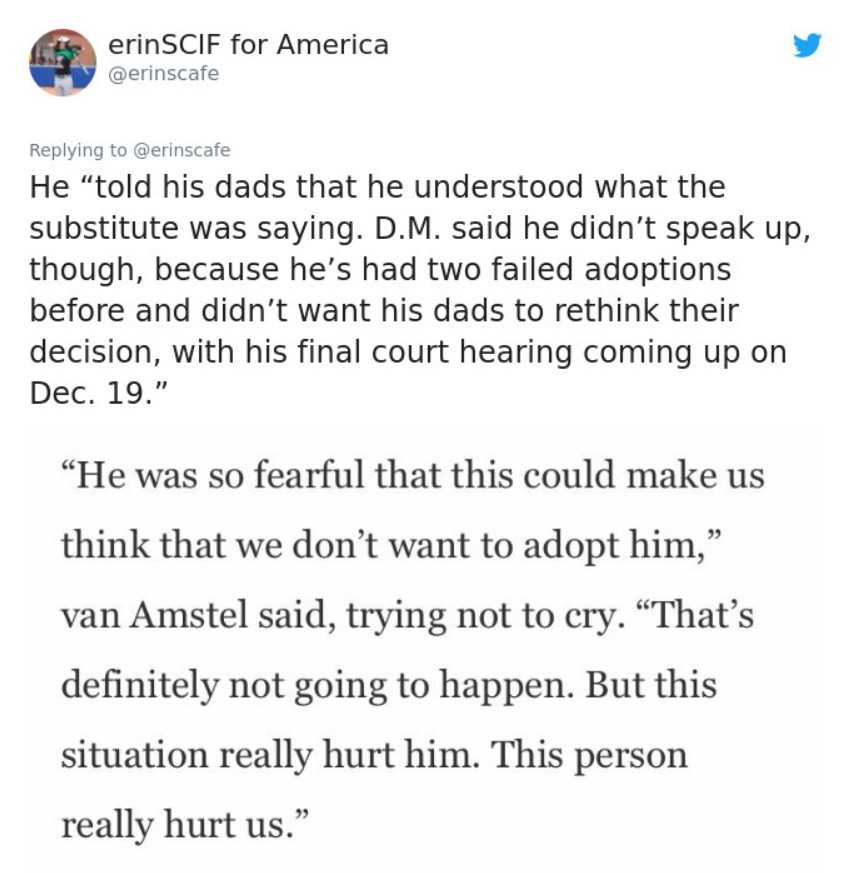 The teacher didn’t stop even when she was getting escorted out of the school. 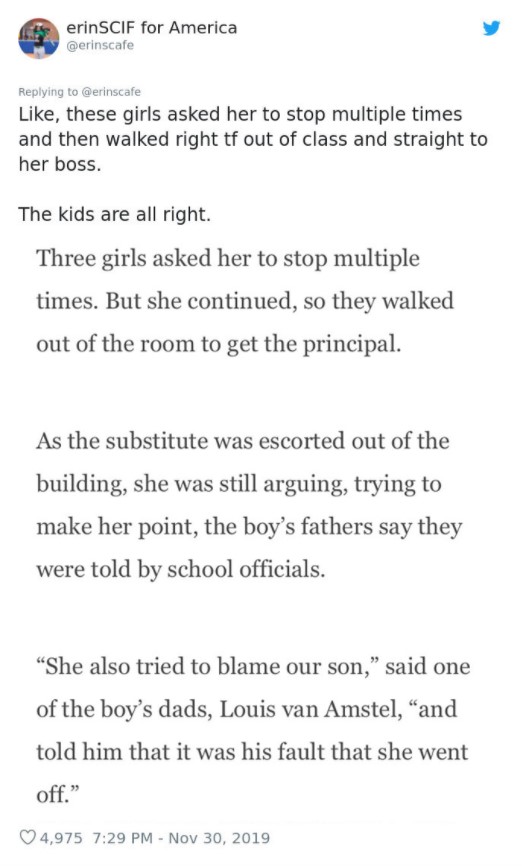 It all started when the teacher asked an innocent question. 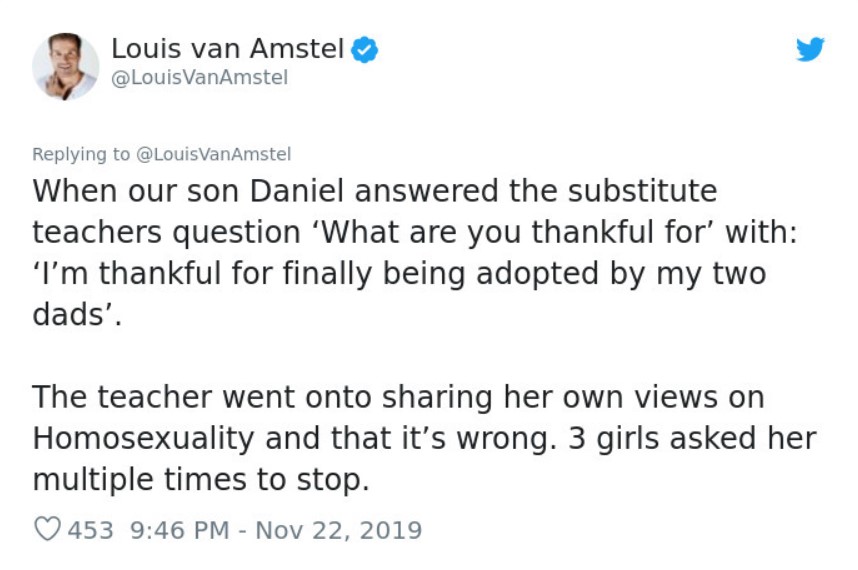 Louis, the famous ballroom dancer had a lot to say about their son’s interaction with the teacher.

Our child was bullied. pic.twitter.com/gZ5yI0Z2F0

Thankfully there were other students there who stood up for him. 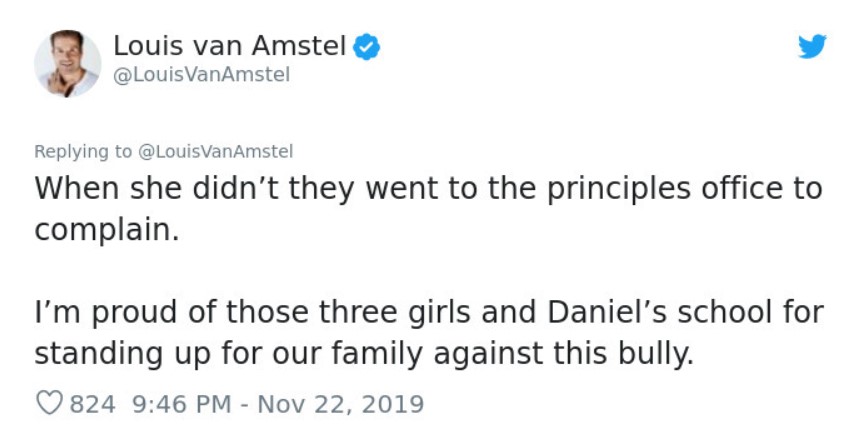 You wouldn’t expect a teacher to do something like this.

Just because someone is older doesn’t mean they are always right. 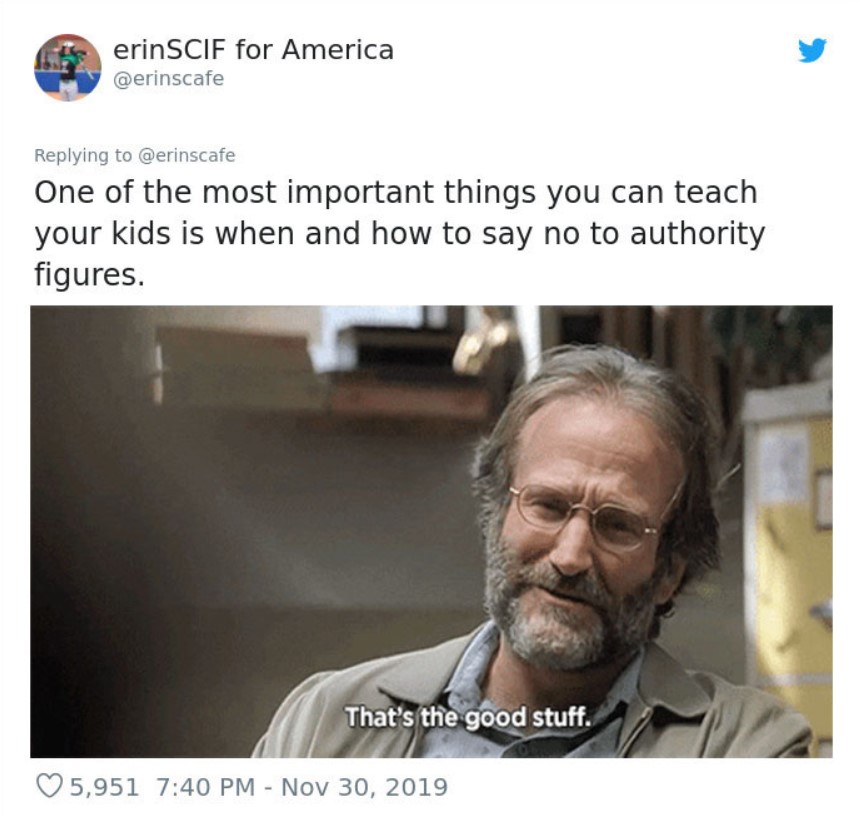 There are so many kids around the world who need a good home. 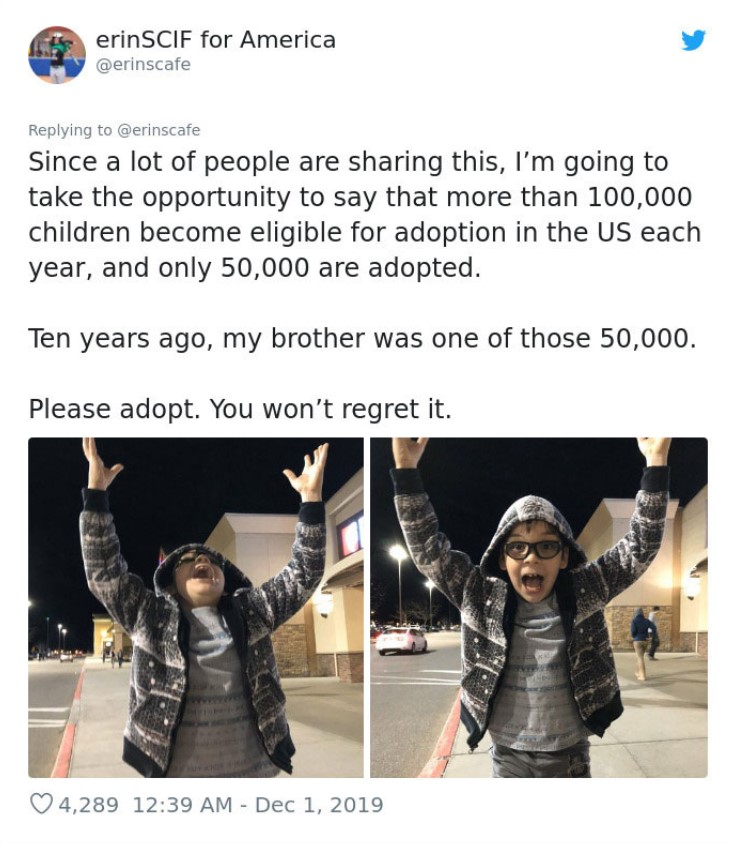 So who cares if it is two fathers or two mothers? 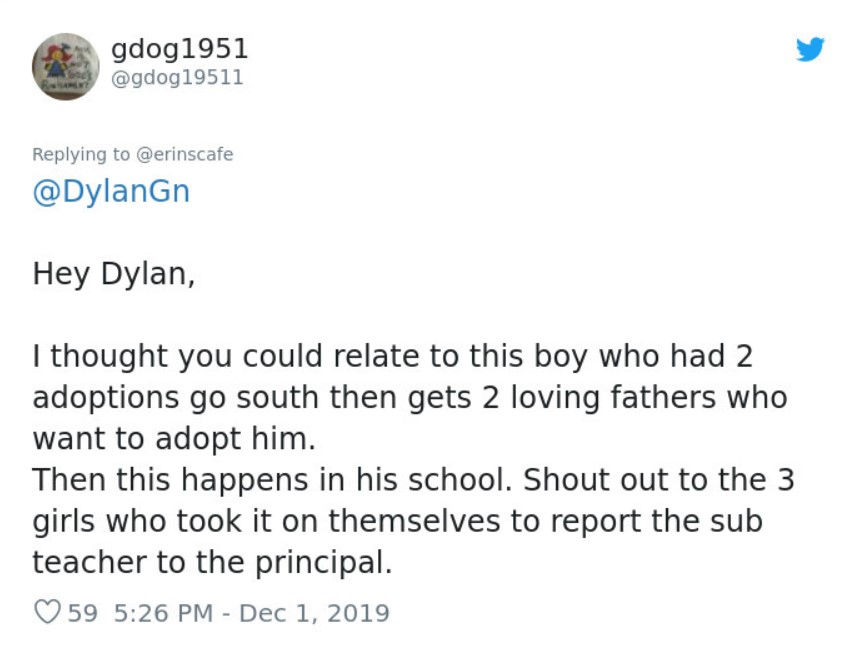 As long as a kid in need is getting a loving home, all is fine. 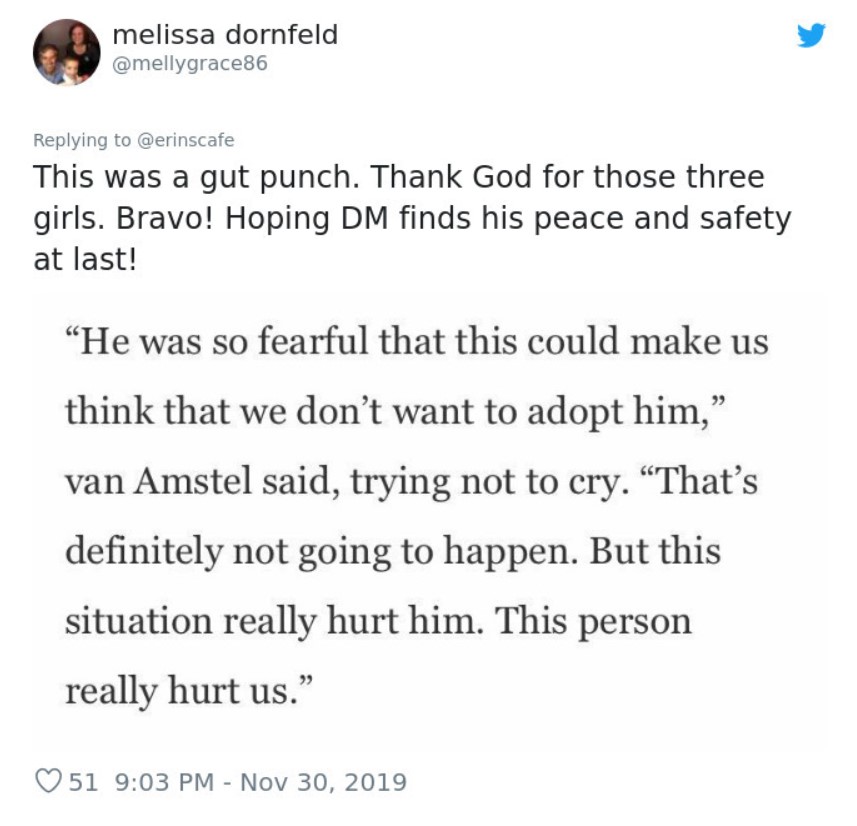 Sounds like something that should happen in the near future.

They were clearly taught right.

After all, age doesn’t matter when it comes to some things.

Did she not understand that she was arguing with a child?

He deserves this and more. 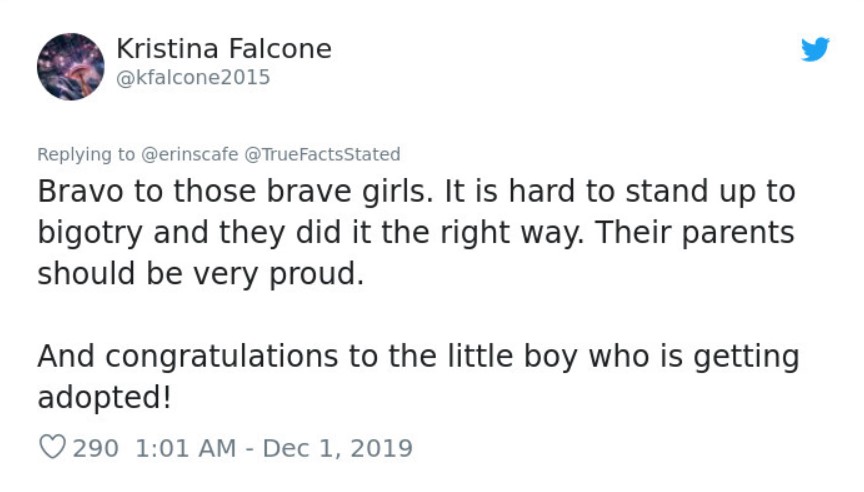 And love is all that matters at the end of the day.

I think most of us have similar regrets in life. 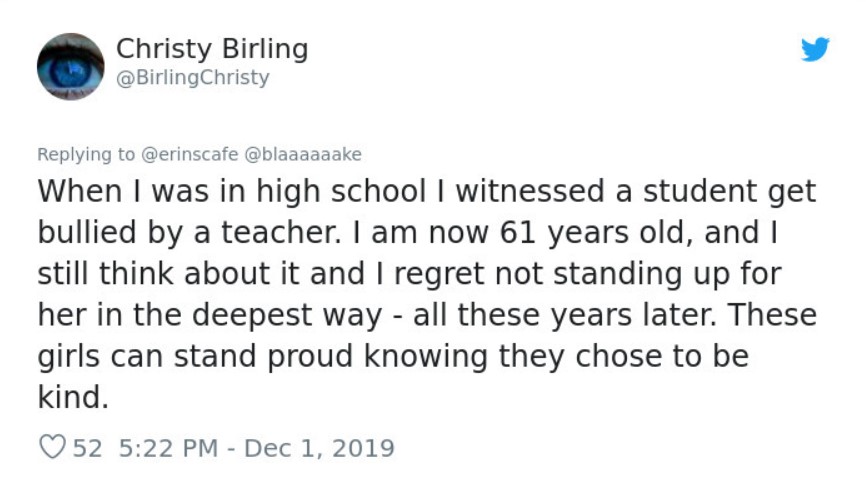 Whoever is doing this, standing up for the right thing is a must. 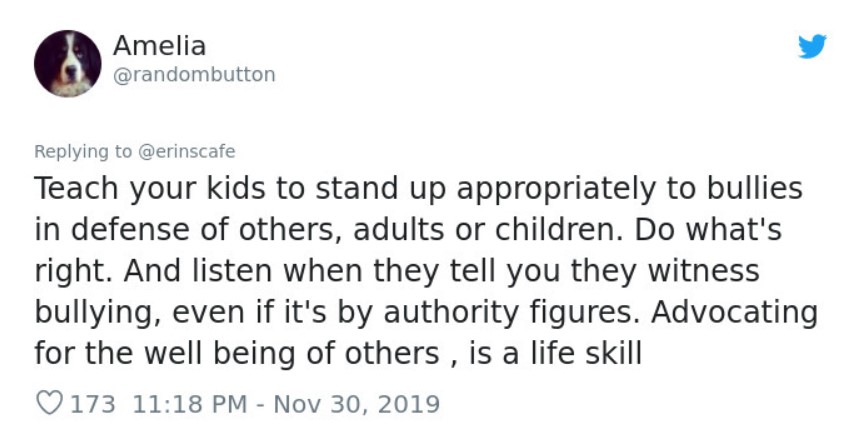 So can’t we learn to be more tolerant towards each other?

He was just thankful for being adopted and she had to ruin it.

I wonder who these three girls are because they deserve praise for what they did.

Who knows really? Only the future will tell.

Unsurprisingly people were not happy with the teacher.

And were quite thankful for the girls.

Does someone really need to tell their ‘opinion’ to a child?

Don’t forget to share so others can see the bigotry that is still present in our school system.