It seems many people don’t understand what mansplaining is.

Because I have seen men explain what mansplaining is so many times to other women and they just don’t get the irony in it. I am sure most if not all women have experienced this. After all, it is rampant in any sort of workplace as some men like to think they know more than you even though you have been working longer than them in that particular field.

Now, I am not saying correcting someone or helping them is wrong but nobody should have a holier than thou attitude while doing it. And I am also not saying that someone more experienced can’t make mistakes because they can but that doesn’t give anyone the right to act annoyingly conceited. You’ll understand what I am talking about once you scroll below to take a look.

#1 We have only started and I am already out of words.

#2 This is just painfully true and also ironic.

#3 That is a new level of mansplaining that I haven’t seen before.

#4 Why wouldn’t he assume that women can’t write anything intelligent?

I was having a disagreement with someone in a meeting and one of my male colleagues mansplained his way into it with, “What Elizabeth is trying to say is…” I was enraged but I waited.

At the end of our meetings, we each have a turn to share what’s going on with us. When the facilitator asked if I had anything to share I said, “I don’t know. John, do I have anything to share?” And it was the single most satisfying moment of my life. -Elizabeth

#5 Paul needs to go back to biology to learn about a women’s body.

#6 Well, that is something.

#7 He did not just do that. I think we need a tram right now.

#8 Just because a tampon can hold a specific amount doesn’t mean you want the dirty one for more than a few hours in your body.

I would be very happy to never hear or read the words “extra juicy uterine lining” ever again. -lisaw

#9 However he needs to read period. It’s due not do. 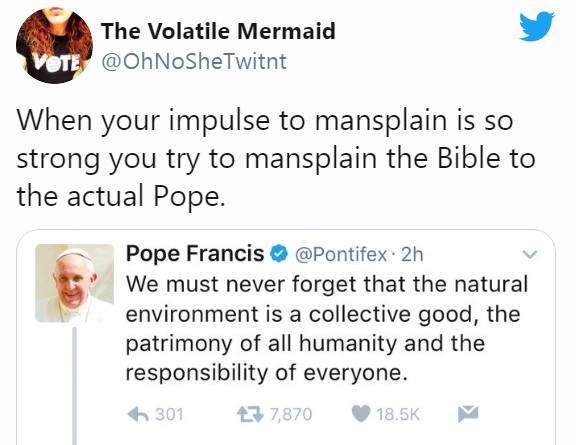 #10 He does know that is his wife right? She has to know him better than a stranger. 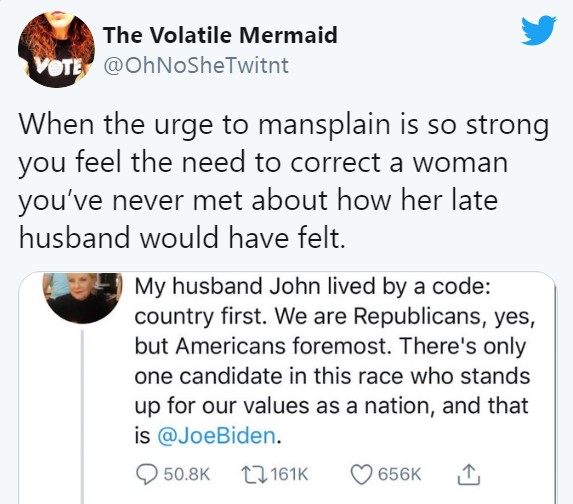 #11 Nobody advertising this thought something was wrong? 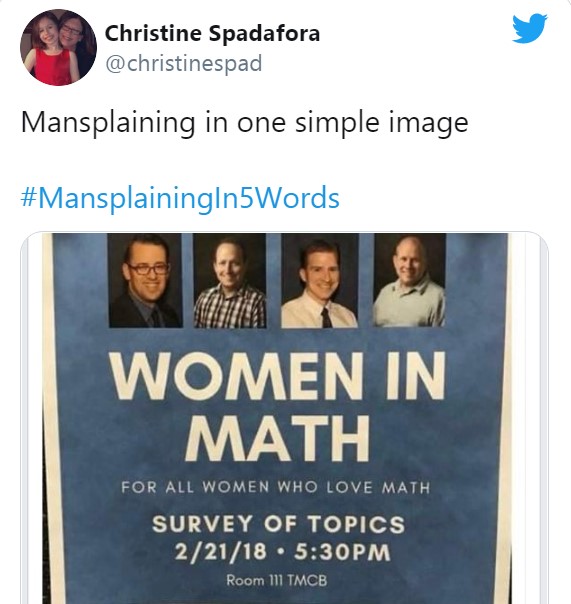 #13 If you know you are hot, technically that is mansplaining.

#14 I think you nailed it perfectly.

#15 I can’t pronounce that for the life of me but it is more striking.

#16 That is usually the sort of people you meet on the Internet.

#17 They would probably go on forever.

#18 I suppose they want to make you feel puny by comparison.

I think there’s just this breed of usually white, usually straight male that has never really contemplated that he might be wrong. The world tells them they’re always right. My brother-in-law is this.

I’ve had 20 years of mansplaining and I’m a man. He sent us a typed letter in 2003 detailing how we were abusing our infant son by denying him a mom because he knows science (seriously…he claimed expertise on this….he sells farm machinery for a living.)

He’s mansplained how heat cooks meat, why if you don’t have brain waves your dead (this little gem was his question to me at my dad’s funeral – ‘Are you sure that he’s dead?’ Yes. ‘Does he have brain waves?’ No. He is embalmed… ‘You need brain waves to be alive.’ Uhhh. Yeah. I know.)

How rain cleans things off outside. He’s also claimed that no one understands that science has proven white people are smarter than blacks, gays are made up of mutant human dna that isn’t meant to survive and Autism is caused by soy… help me… -SeanMY

#19 And then they act like they just wanted to see if you knew.

#21 I wish that could work but it is entirely impossible.

#22 If you would just listen for one second, you might learn something.

#23 Well, Actually it wasn’t that bad. Who am I kidding at this point?

#25 I hate it when they add a ‘sweet’ name after their trademark words.

#26 I don’t think that is a choice nowadays.

#27 That is definitely a trap and you are doing amazing!

#28 We finally have a new word for mansplaining and I love it.

Which one of these tweets was your favorite? Comment down below and let us know. Don’t forget to share it with your friends as well.