If she had only been a bit more lenient.

I know rules are set in place for a reason. Without laws and regulations, our society will plunge into chaos. However, making pointless rules just to exert your power onto someone is never a good idea. And yet so many managers and higher-ups do this but in the end, just make everyone’s life difficult.

You would think your boss would want you to have more independence so you can work more efficiently and not tie your hands but that is exactly what many higher-ups do. Now I am not saying some rules are bad per se. But if they start to annoy even you, the manager then there is definitely something wrong with the policy and it needs to be changed.

However, as we have seen time and time again nobody likes to have a taste of their own medicine. Too bad for this woman because that is exactly what she got.

Things seemed great at first but we all know that never lasts. 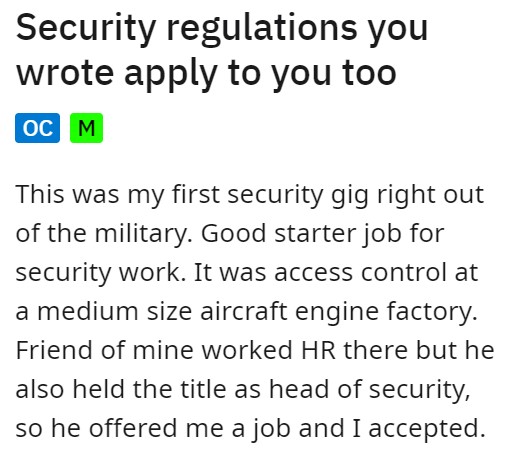 While having strict ID checks don’t sound like a bad thing but that is only if you don’t take it too far. 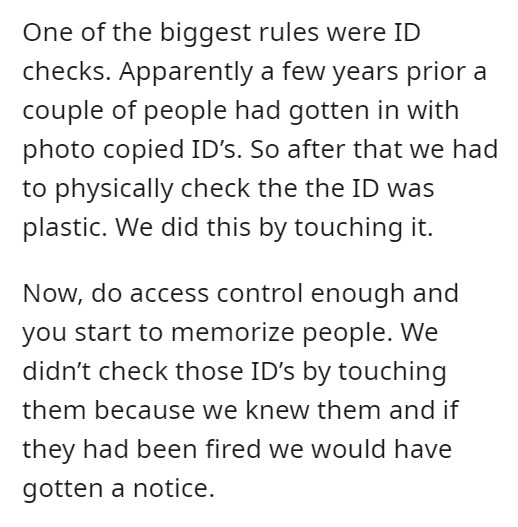 The new rule in itself actually sounds like a great plan until you take a look at all the real-world applications of it. 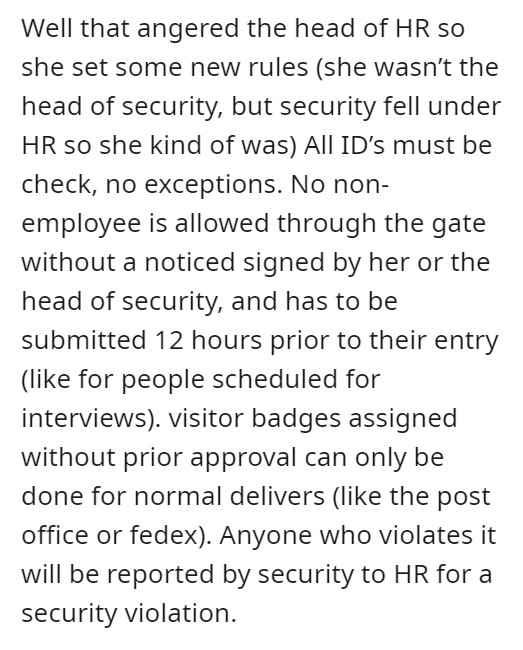 She should have known this would happen. Or did she think she was exempt from her own policy? 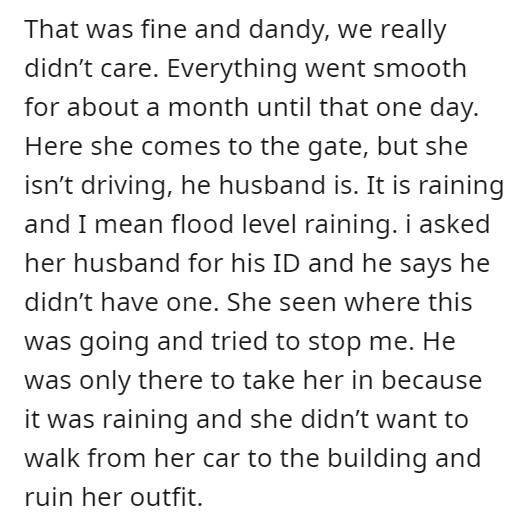 I bet that is what many other workers had said before. 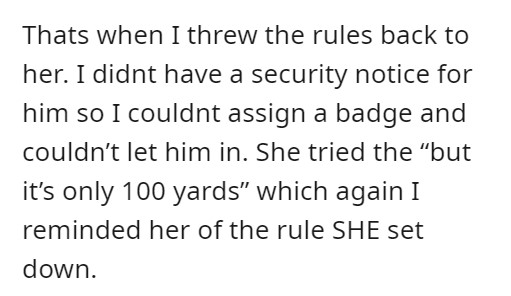 I can understand the strict ID check but not having raincoats is just absurd. 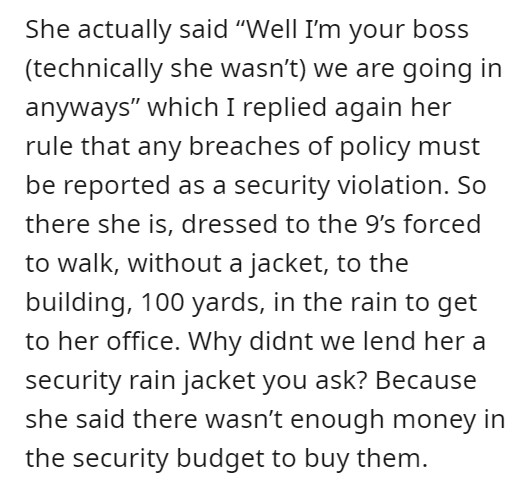 I suppose that was sort of an olive branch extended from her. 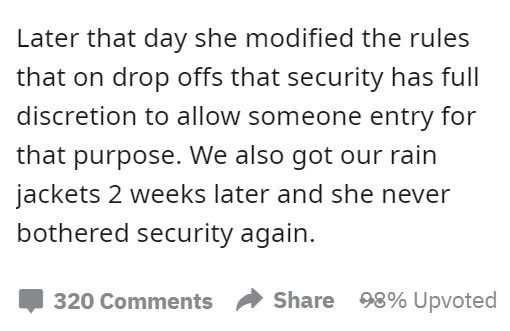 At least she learned from her mistakes. Not many people do. 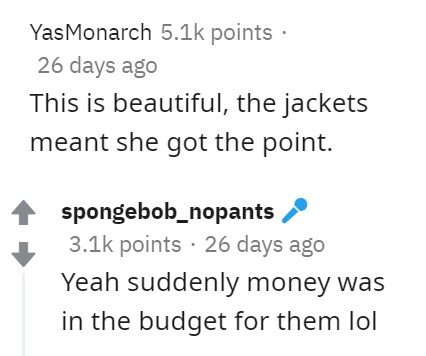 Here we have another similar story. 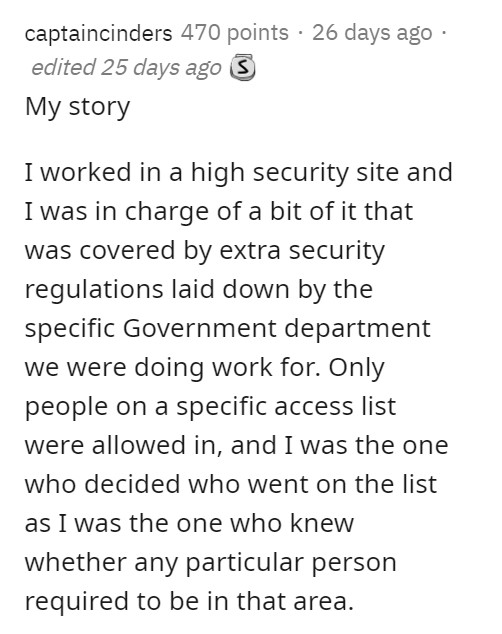 Malicious compliance is the only way to go in these sorts of situations. 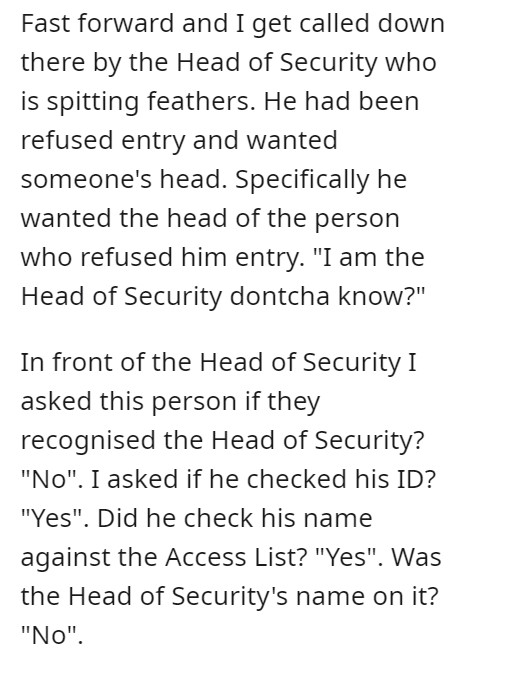 I bet the head of security did not see that coming. 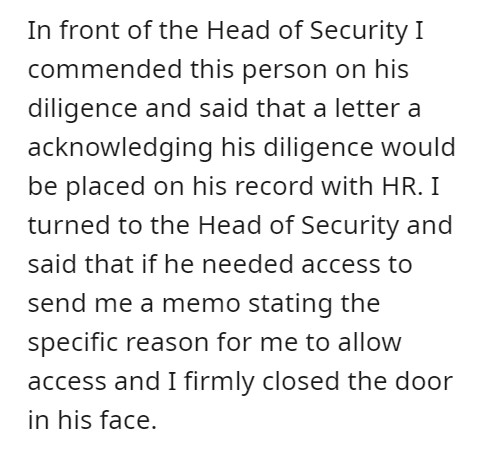 And it seems he was pi**ed but he couldn’t do anything. 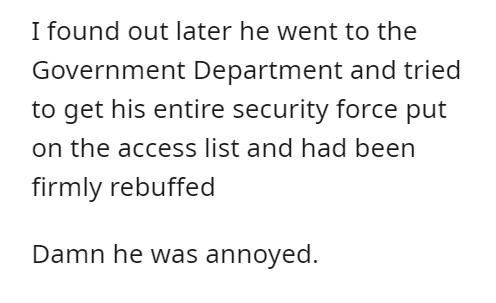 Sort of similar for me, our private patrol company had a contract on the back end of an airport with a dod hanger. That part of the complex had its own security that wasn’t part of our company, but they weren’t allowed to touch the hanger, or go in it for any reason. Got a call from them one night about a forced door. Go there, pull around to the hanger and the door is fine.

Local security shows up, told him what happened and he said “oh about that time I checked the door” I laid into him that he wasn’t even supposed to touch that hanger, the client laid into them too. Then another time a door went off, the doors would set off an alarm in a high wind, the security guard got mad because I didn’t stop at the gate, even though they knew weren’t going to stop and didn’t have to stop. Nor did we have to explain to them why we were there.

He tried to get me fired, it didn’t go well for him. –spongebob_nopants

Exactly! Couldn’t have said it better myself. 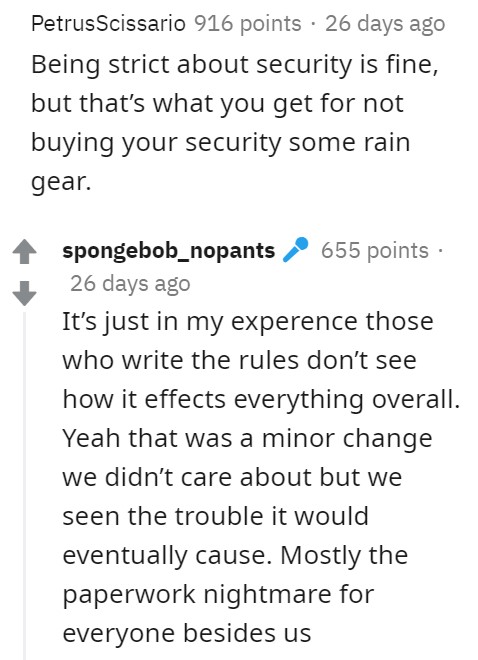 Have you ever done something similar to this? Let us know in the comments below.