Landlords think they are untouchable.

I obviously don’t want to generalize against every landlord ever. However, from all the stories I have read, it seems they are hell-bent on wanting everyone to hate them as human beings. Perhaps they let the power get to their head and that never urns out okay. For example, this landlord wanted to keep a part of the deposit for cleaning when it wasn’t even clean when they had first rented the place.

You would think he would learn his lesson when these people went to the police and sent him a letter, but he didn’t and decided to keep the whole profit. I wonder if he thought he was above the law somehow and nobody could get him in any trouble. I can’t understand why he would do this otherwise. So you can read the whole story of how the couple got their revenge after he just wouldn’t give them their money back.

He might have thought he would get away with it by how nonchalant he was. 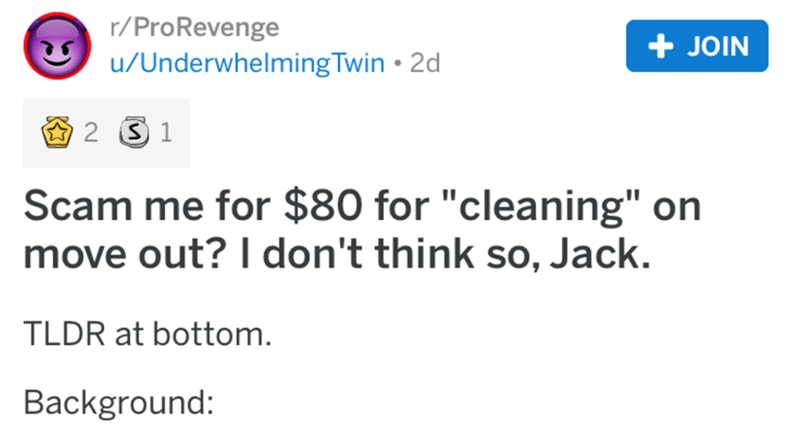 That does sound like a pretty small place if you ask me. 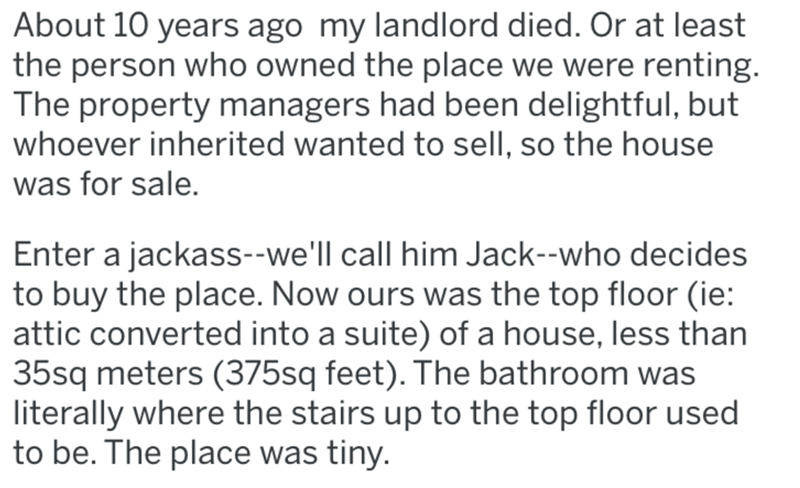 Okay that is a significant amount to increase in one go. 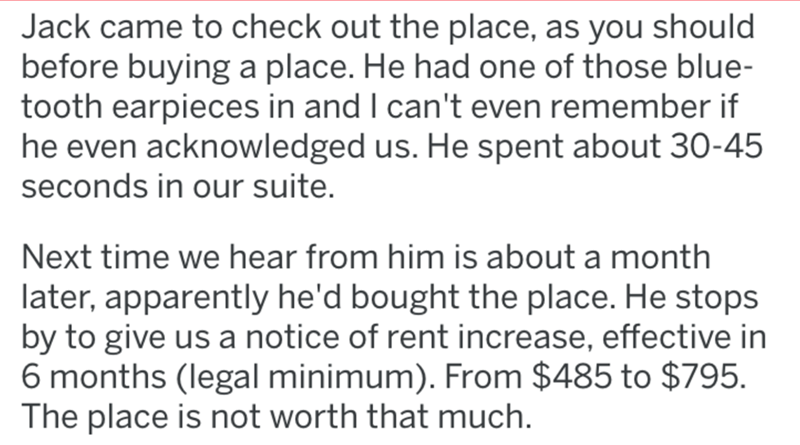 He didn’t even do his due diligence and just decided to keep him. 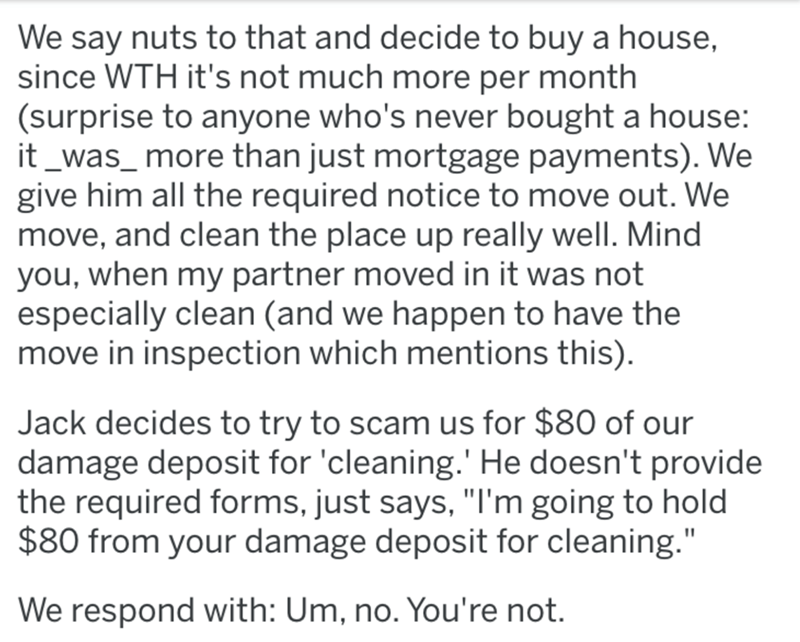 I had something similar happen. The Landlord kept talking about selling the place, so we decided it was finally time to buy. Tried to screw us out of the deposit and get us to pay more money which is apparently legal under California law. But he fucked up and didn’t get us receipts within the required 30 days. He also was claiming a ton of damages that weren’t valid such as carpet replacement when we’d been there for more than 10 years. There was some damage I agreed to due to our movers slightly damaging a wall but even with his questionable repair costs it was small compared to the total deposit.

We went back and forth a couple of times via email and I finally wrote up a long document detailing all the things that were questionable and outright illegal. I ended it with quoting the California law that allows treble (3x) damages if a landlord withholds money maliciously. Ended up settling for what I had asked for the next day once he saw the potential consequences.

He thought they would get scared and not fight against him, but they did.

I mean a person would usually give up rather than spend even more money. 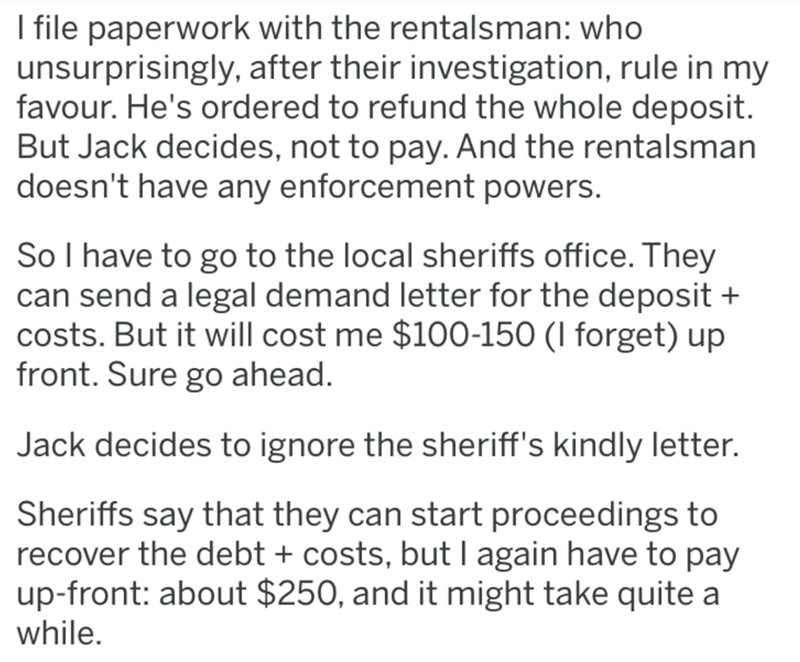 And it seems the only reason he thought he could get away with it was because he had done so before many times. 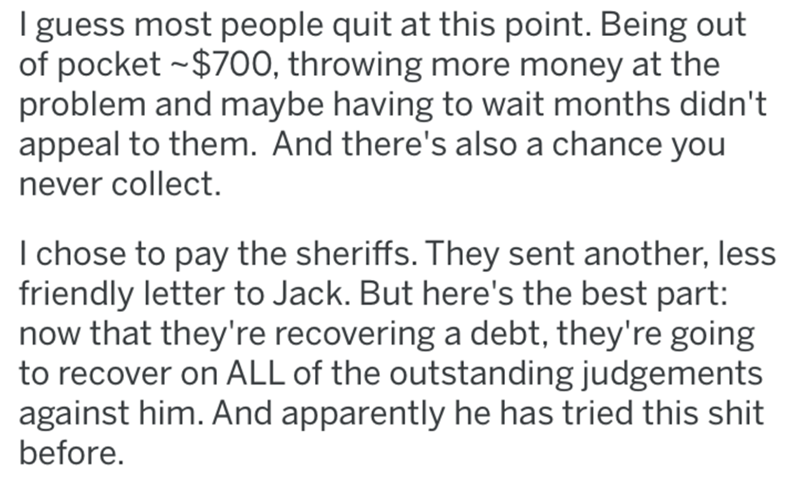 This makes me sick, and I’m glad you won in the end. He had been doing it to the other knowing most of they wouldn’t be able to pay the additional money to the sheriffs station and just give up. You got revenge not just for yourself but everyone else this a**hat screwed over, thank you hero! –ajmixalot

They started taking even more action against him and that is when he decided to concede. 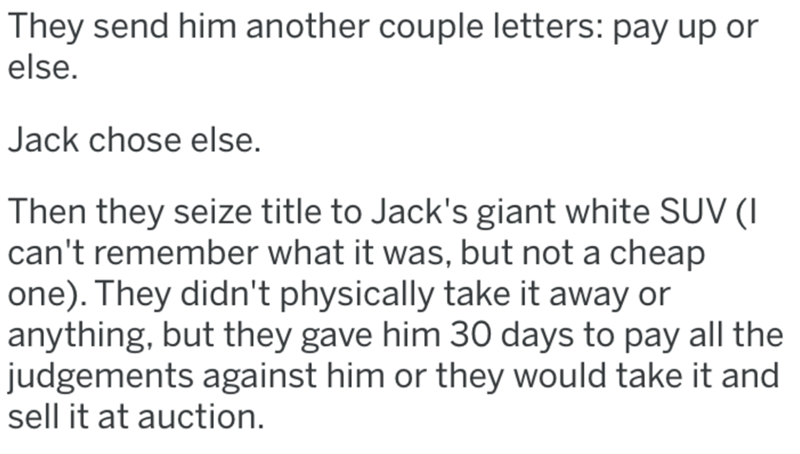 And so his past came back to haunt him as well. 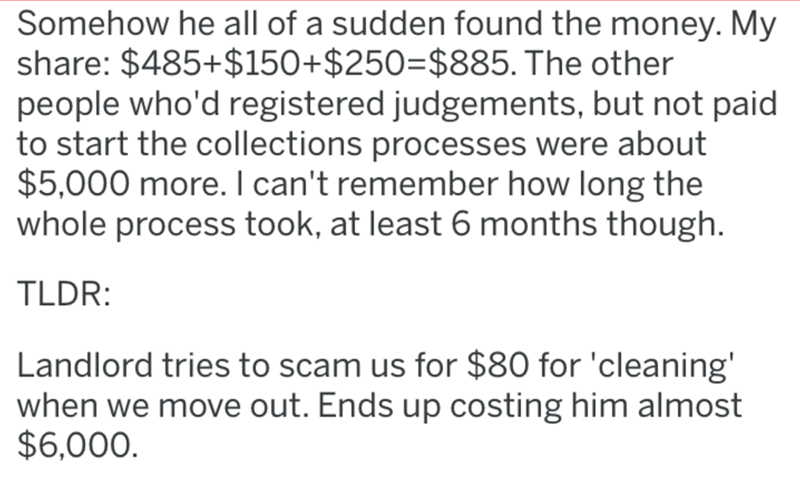 I was in a similar situation last year. I texted my landlord for my $1800 deposit, and he said he’d “call me about it later in the day”. Obviously a huge red flag, so I downloaded an app to record the call in which he said he’d had medical bills and couldn’t return it, offered to give it to me in 2 weeks, and then tried to say I’d damaged the place. 2 months later in small claims court and I got the full deposit back plus court costs. A lot of these a**holes count on you not holding them accountable.

At the end of the day, he got what he deserved. Has something like this ever happened to you? If so how did you deal with it? Comment down below and let us know. 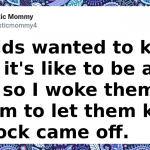