Karen’s are the bane of society.

With their usual streaky hair bunched up in the classic hairdo and their banshee voice, we can never see them coming. Honestly, I feel bad for women who are actually named Karen and have to deal with this stereotype. However, that is not what we are here to talk about. You see we would all like to teach a Karen a lesson why they decide to harp on an employee but most of the time we don’t get the chance.

But this guy did, and he made it his mission to teach her a lesson. She might not have changed after this interaction but at least we got this glorious story out of it. Honestly, this might be one of the best interactions I have ever read, and I have been a Reddit lurker for a long time. So get ready for some twists and turns and scroll on below to take a look at how this wild Karen is tamed.

People who have worked in retail before have a special place in their heart for Karen’s. 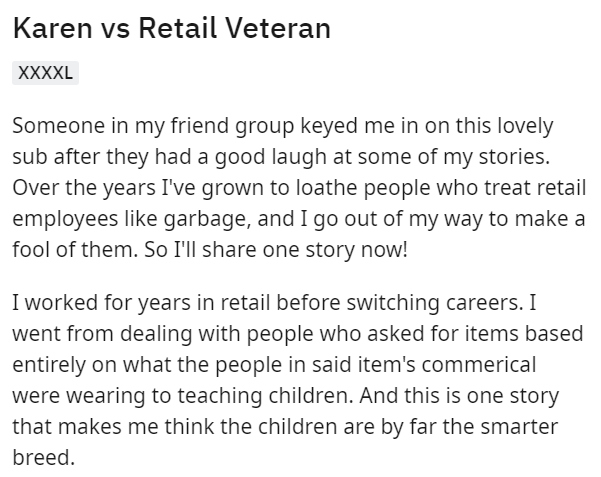 Usually if I make such a mistake, I usually say sorry and move on. 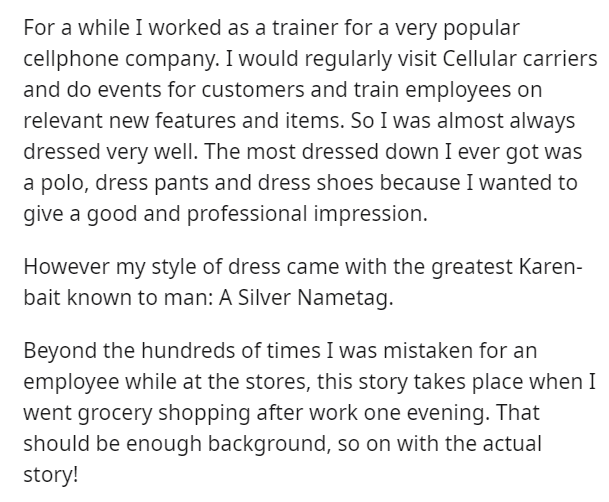 However, Karen’s don’t do that. They like to force everyone to be an employee. 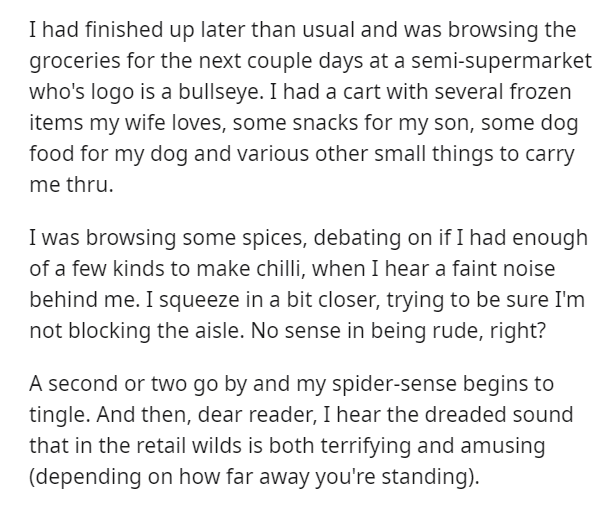 I have sadly heard this mating call many times in different circumstances. 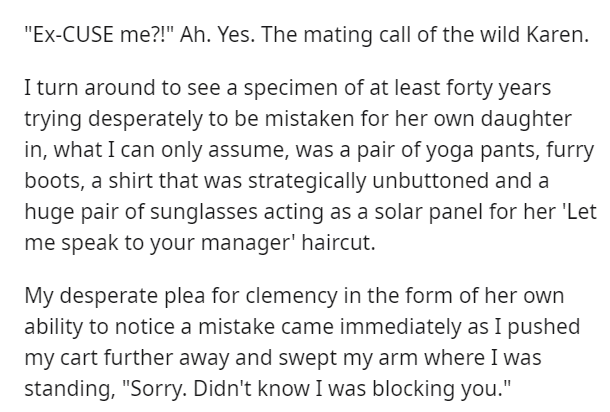 Maybe the sunglasses were stopping her from seeing your uniforms correct colour? 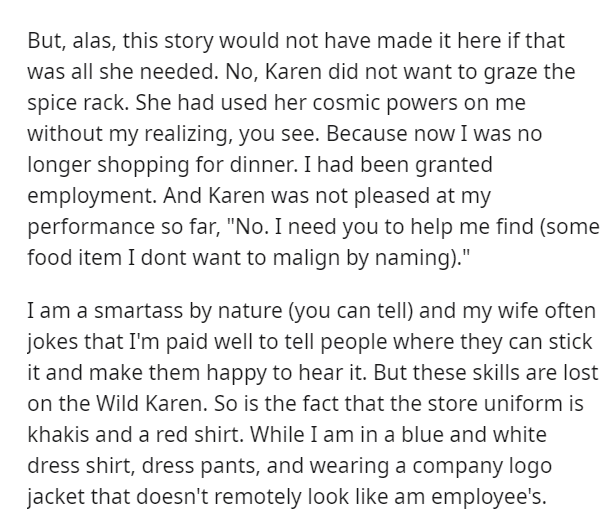 It’s actually amazing how people’s attitudes shift when it comes to people in uniform. I live in a nice building and work as an accountant. I also volunteer in a pet shelter on weekends for which I wear a uniform t-shirt. Because it’s a large building most people don’t know each other and I always sense an attitude shift when I am in my t-shirt. Like I get up and down looks and people act like I am beneath them and won’t hold elevator doors or cut me in line to the doorman, even though I am their neighbour. Makes me sad for humanity.

Sometimes people do actually read my t-shirt that clearly says Pet Shelter Name Volunteer, and then they get all super nice and chatty. –yalllove

What is so wrong with being called Ma’am? Isn’t it respectful? 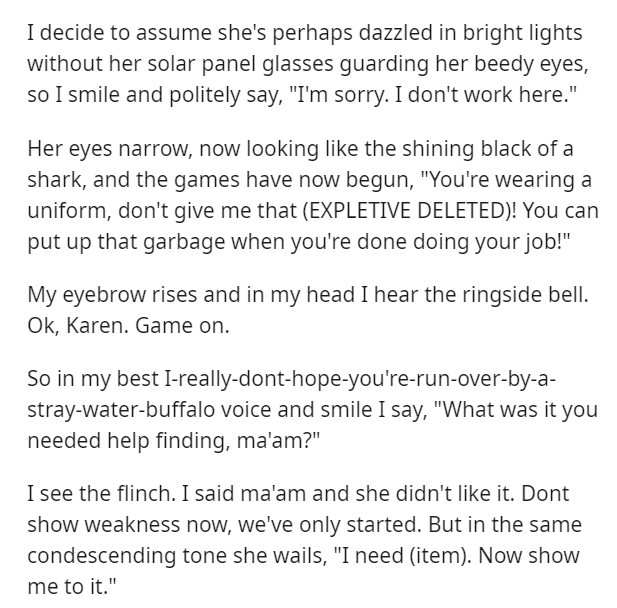 How big is this store that she couldn’t walk a few isles? 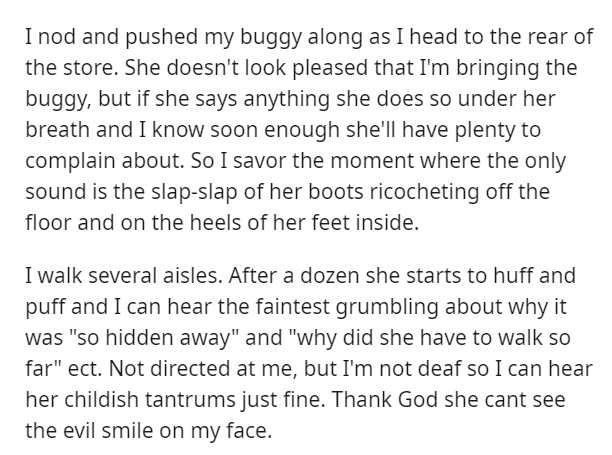 I can see where this is going, and I can’t wait to see her reaction. 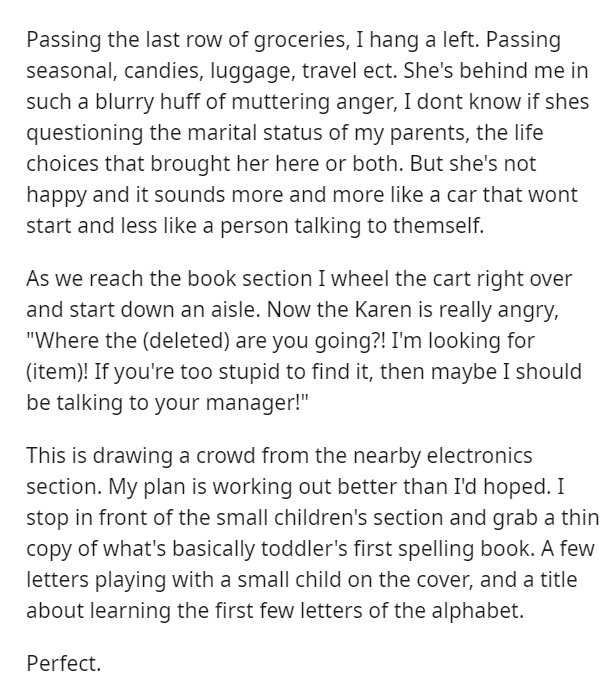 I mean I bet she had never been treated this way, and it stunned her into silence. 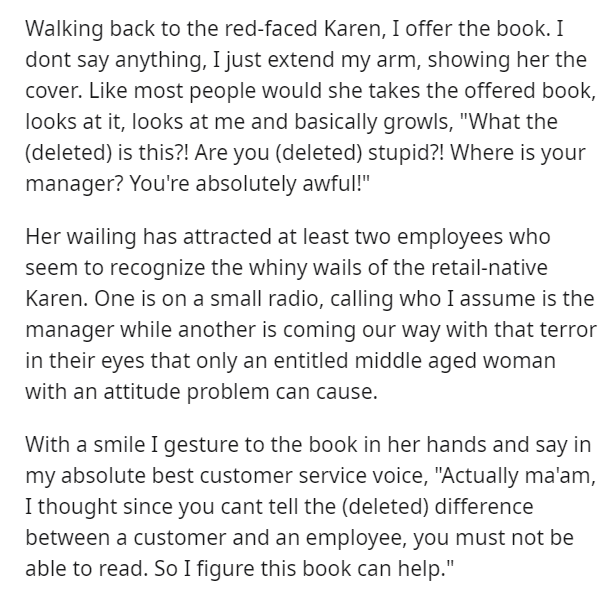 The hamster was probably tired of making her think like an actual human being. 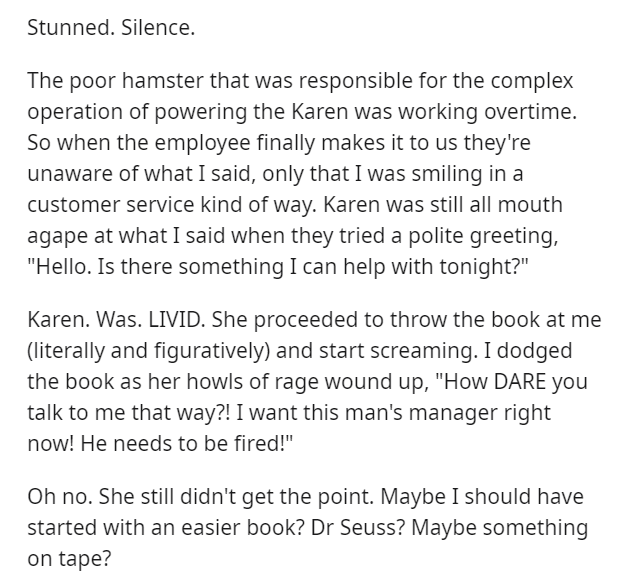 Even his wife knew he had done something which is just hilarious. 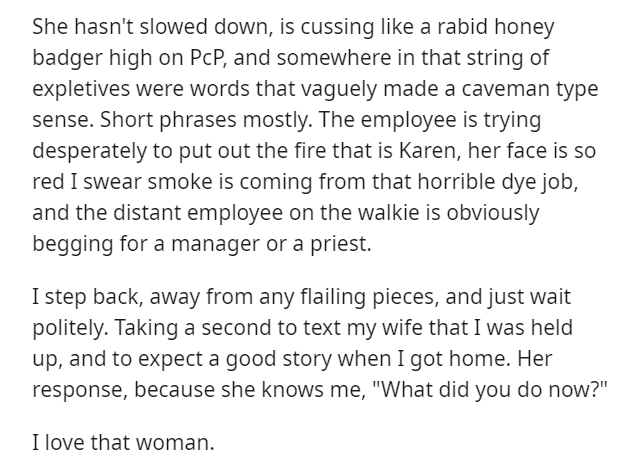 Do Karen’s know that their haircut has become a joke by now? 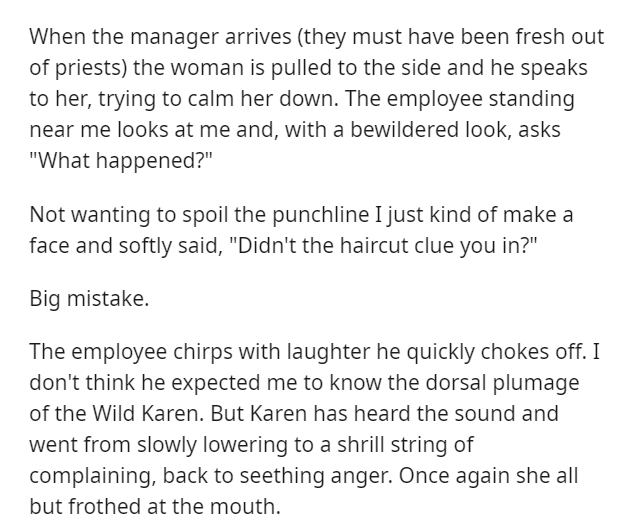 I understand as my belief in humanity dies each and everyday little by little. 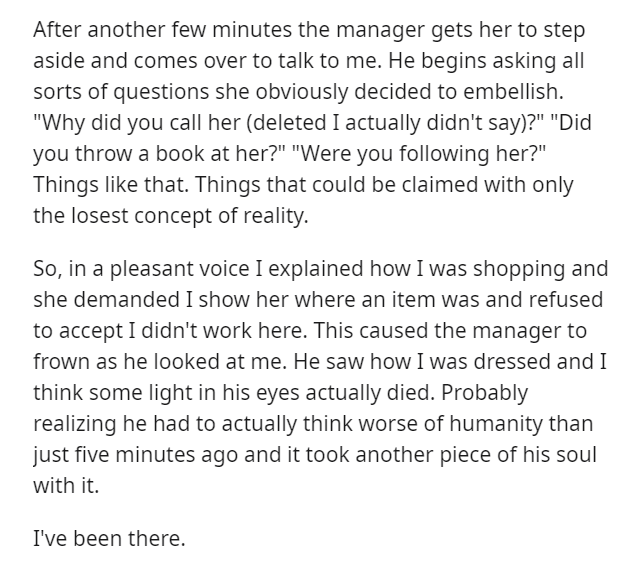 I would have broke down laughing as well, so I can relate with this employee. 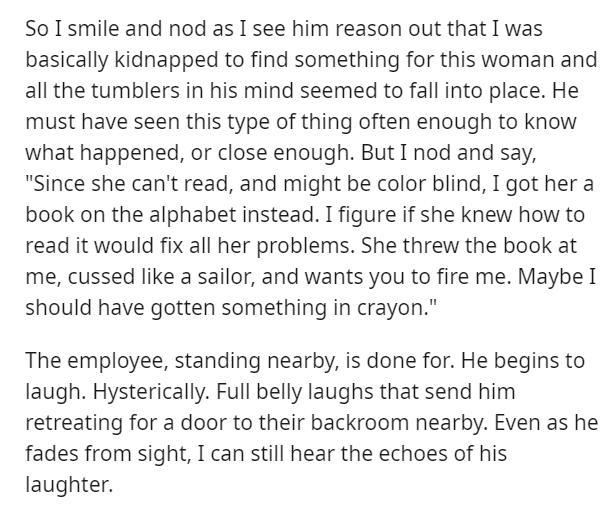 Not only was she incredible rude, a liar, but she was also entitled as hell. 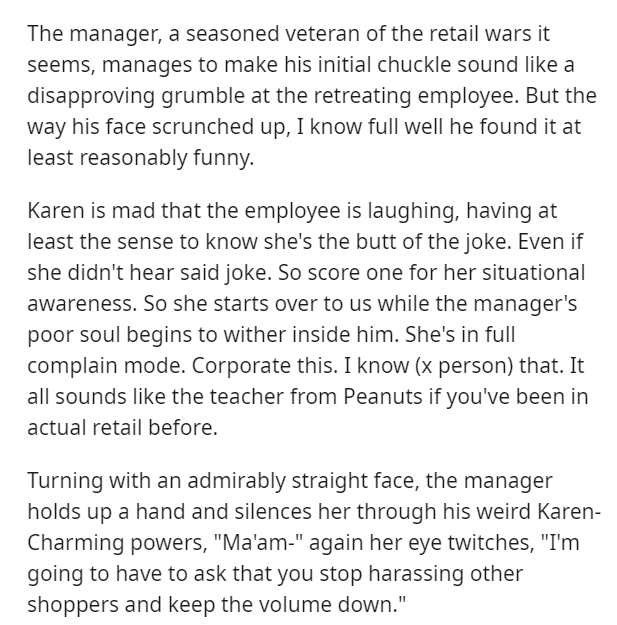 I’ve personally mistaken someone for working at the bullseye store before, but I will say, they brought it upon themselves. She was crouched down in an isle, doing who knows what to items on the shelves. Wearing a red Polo and khaki pants. When I asked her if she worked there, she snapped. “Good Lord, stop asking, I don’t freaking work here”. I just looked at her, and said sorry, but that’s what you get for wearing that outfit at a bullseye store. A simple No would have sufficed. –SomeGuy8010

Did she think screaming some more would solve everything? 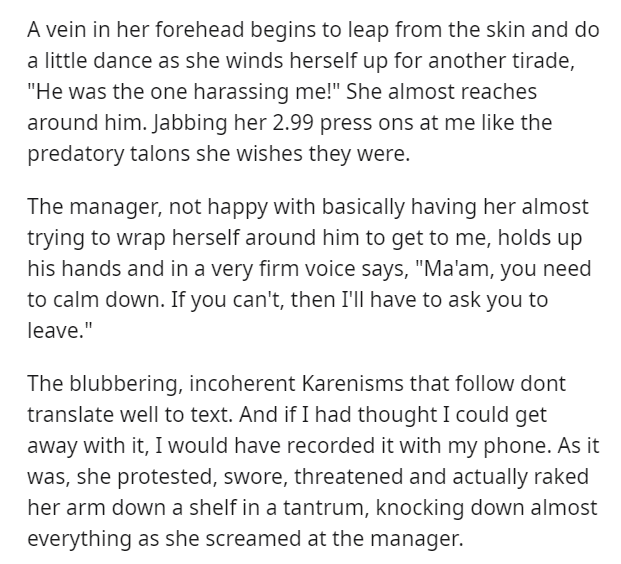 I honestly can’t believe that people like this exist, and yet I have personally seen it. 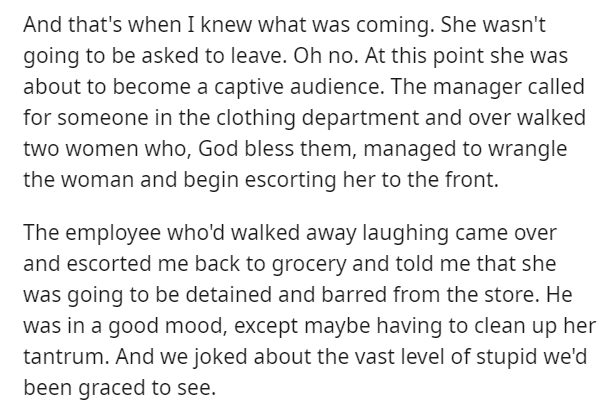 The crocodile hunter of Karen’s? I think I have found my dream job. 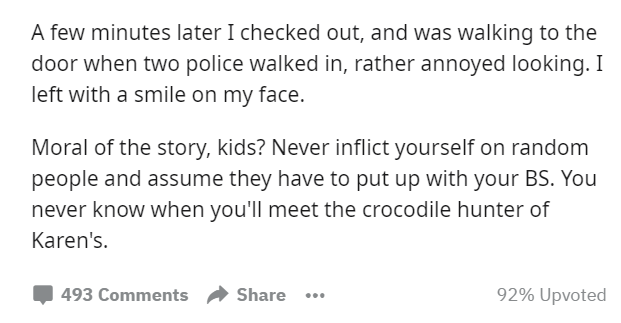 Comment down below and let us know what you thought of this amazing interaction? Have you ever had to deal with a Karen? If so how did it go?