When you are a decent and responsible citizen minding your business, there is nothing you want more than people around you and the authorities to extend you the same amount of respect that you bring to the community. The last thing any person wants is to get disturbed by the city officials over an issue that could have been easily avoided.  Most of us give into the system and bow to the issues that we face. It takes too much time and energy to fight back and authorities make it very hard for you to win against them. Sometimes you don’t even understand what the point of creating a big deal is. A lot of people give in because they are just tired.

However, we found one person who knew how to fight back and not just that, he only knows how to take revenge. He did not accept the mess the authorities had created on his property. He showed that under no circumstances he would tolerate mistreatment.

So this is how the story starts. The man Carl had his property backed up to a city park from one corner. An issue came up in the early ’80s but it got solved right away. It did not prolong further. 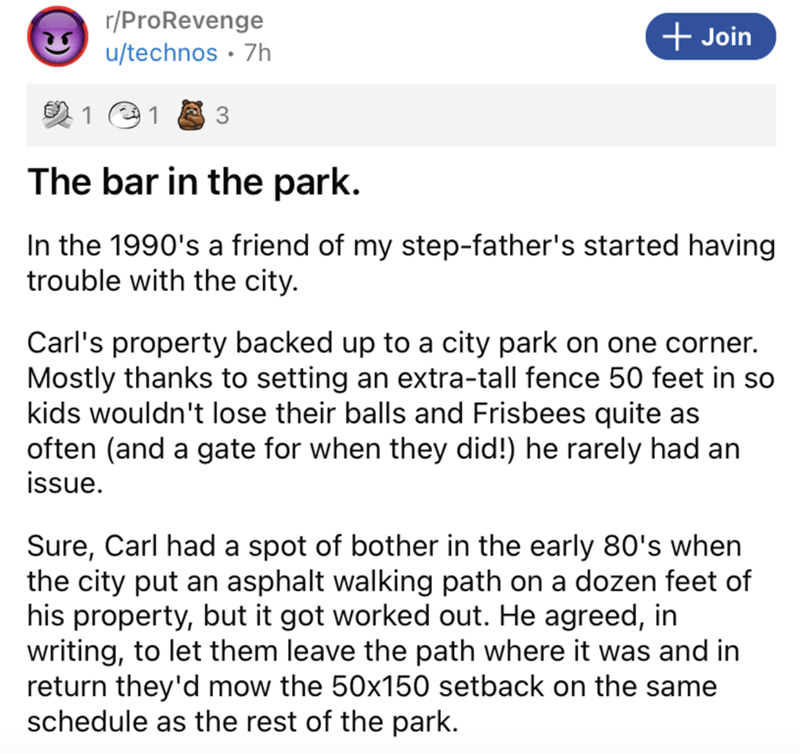 However, things changed in the spring of 1997. It was when the authorities decided to improve the park. Just a few days before the park was set to be open to the public again, Carl noticed the mess the authorities had created on his property. There was garbage, trash and picnic tables etc. He was not liking this! 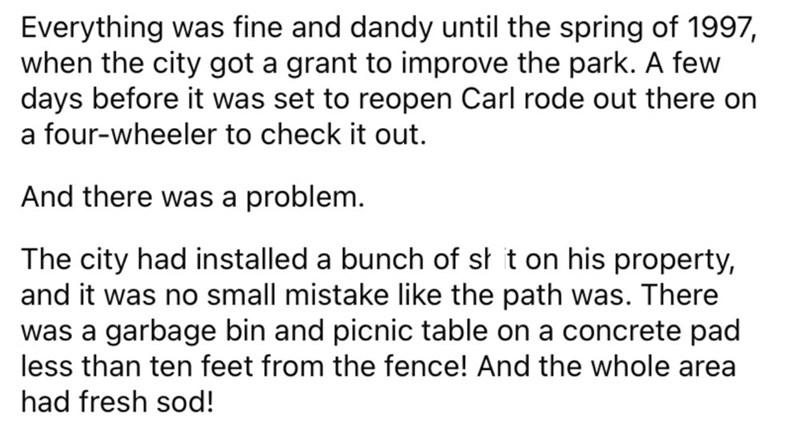 Carl called his company surveyor so they could examine the damage and how much his property had been invading. That is when the police arrived. Police’s response was unacceptable to Carl and he wanted someone in authority to handle the situation. Carl did it, right guys! This is how it should be done. Never get yourself trolled by the police. 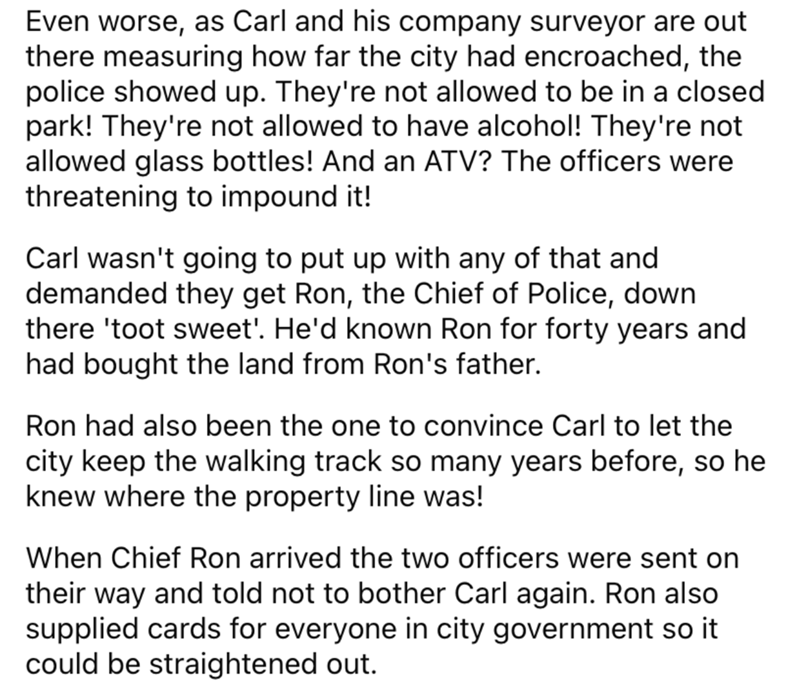 Carl was on luck here that he knew Ron. It would have been even more difficult otherwise. With all that history they had, Ron clearly would understand where Carl was coming from. And it clearly helped. However, of course, when bigger authorities get involved, it is never easy. Damn, the authorities can be so evil and malicious! They literally thought they could get away with playing this dumb. 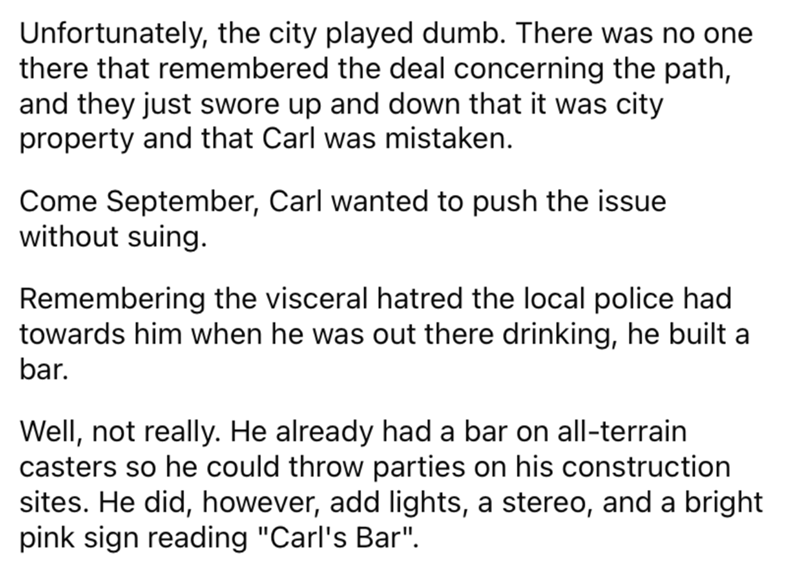 Damn, Carl pulled something there! He pulled a part of the fence down and set up a whole bar, inviting everyone he knew to join. This would surely put the city officers in their place. 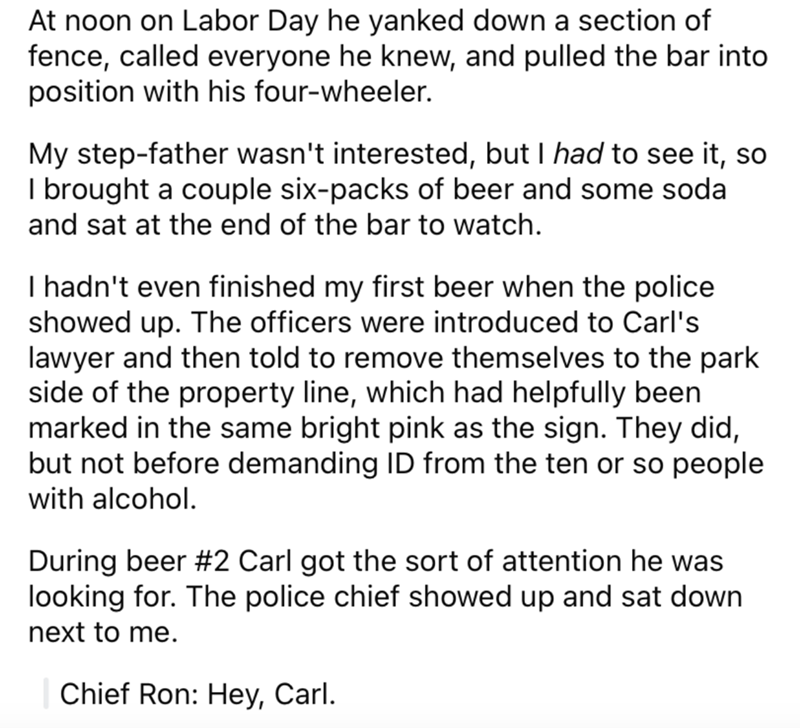 And the police showed up again! Damn, Carl getting more attention than our favourite Beyonce. Carl’s lawyers weren’t coming slowly either. They stood up to the officers so sternly!

Carl sure is s smooth talker! He wants this issue to get solved but he not letting his calm fall apart. He is not letting his anger get the best of him. But instead, he is using his anger to the right path. Chief Ron thought he could just come and request Carl to cave, but that is not how Carl functions. Carl fights back. “This is my yard and you know it”. Wow. 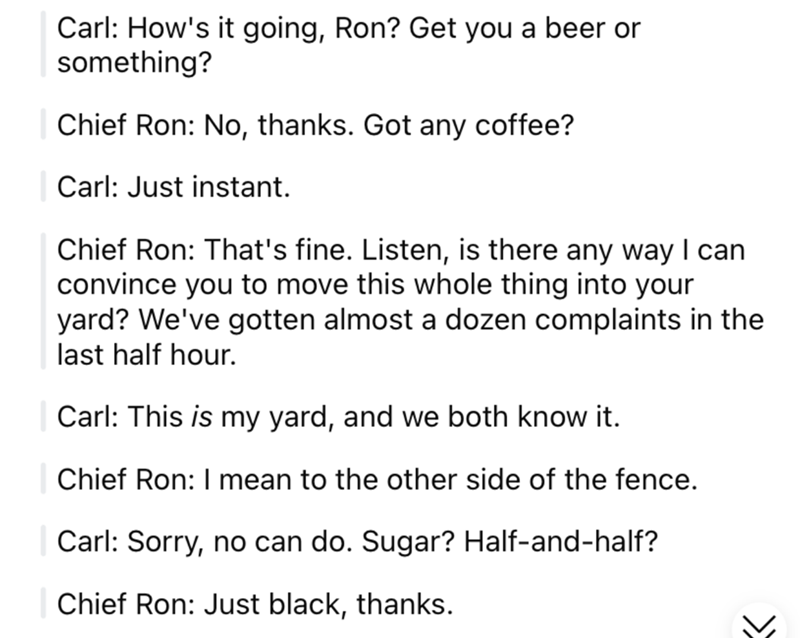 And here it is guys, Carl got it his way! The city did exactly what Carl demanded. Carl showed some compassion and let them have a few things like the walking path, but other than that, everything cleared. 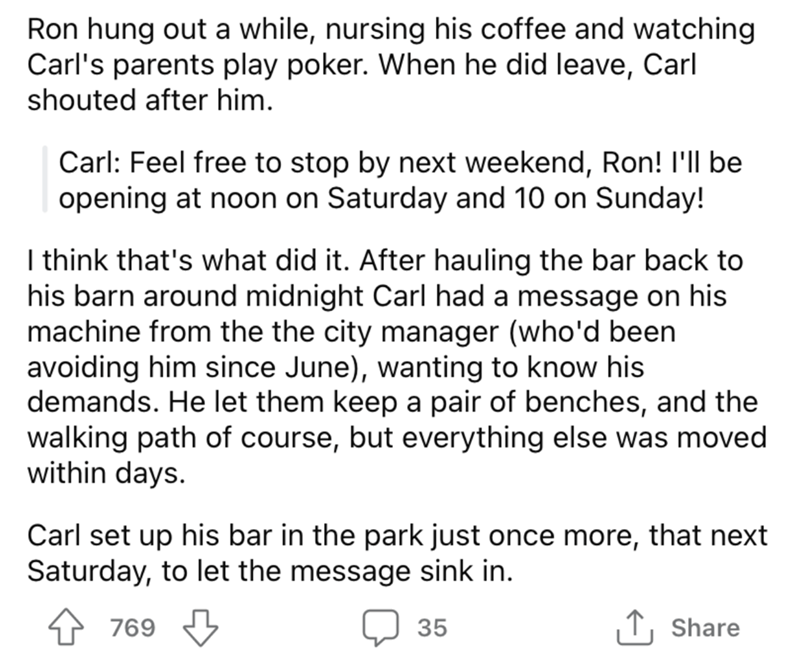 And this is how you do it guys! Just know that if you stay persistent with fighting for your rights,  no one can take them away from you. If there is something you legally have power over, the authorities do not get to exploit you just because they are higher in status. Do what Carl did and follow his path. We have all been in situations where we were robbed of our rights and unnecessarily disturbed by other people. It is when they see we are letting them win is when people realize they cannot walk all over you.

We have to stand strong and never step back. And maybe take a little revenge in the way Carl did. We gotta have fun too, right?

So have you been through something similar and have an inspiring story like Carl’s?