Whether we’re a student or work somewhere, we are always surrounded by a few over smart people. These people think they are way too smart, and everyone else is just dumb. They can fool anyone and get their way. However, they themselves are the dumb ones around. People who think of themselves as extremely smart are usually the dumb ones. People who don’t say anything and are generally generous by nature are not dumb. They’re kind and well mannered. They see and observe everything but choose not to argue with idiots. They know that arguing with brainless people would only bring them down to their level. It won’t do them any good. It’s better to excuse and change paths.

For some people scamming others and getting free things is a big achievement. They think it’s cool to trick others. They have no clue that this behavior of their’s is only making them lose their own respect in everyone’s sight. It’s not like others can’t see what they’re doing. Everyone knows and sees everything. Eventually, when things get way out of control, and they have no amount of patience left, that’s when these people let it all out. We read an interesting Reddit that serves as an example of events like these. So a guy posted in the Subreddit  “Am I the a*shole” about one of his co-workers who used to scam everyone at the office and get free lunch. It was about time the OP said no, and his co-worker totally flipped out. Scroll down to read the whole story.

The OP overheard his co-worker bragging about scamming people for free lunch. 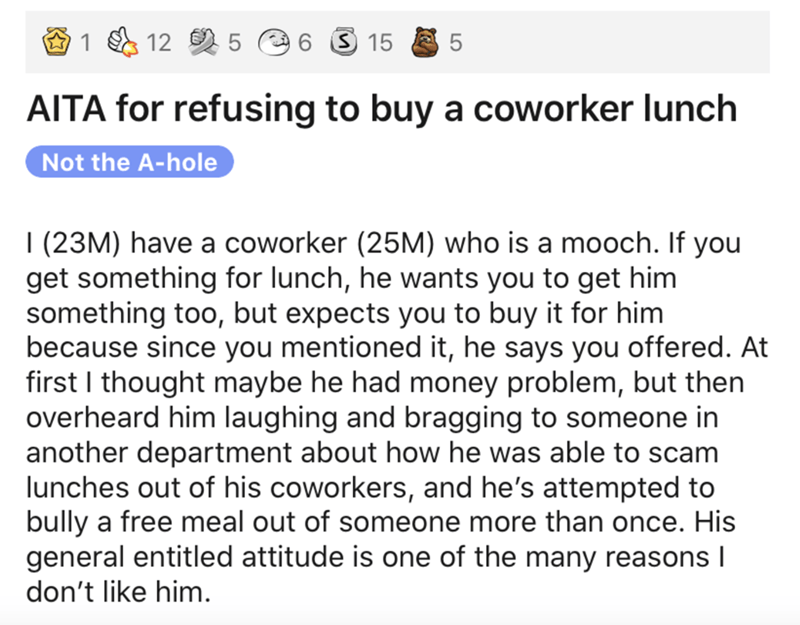 Scammer co-worker complained to the boss about OP. 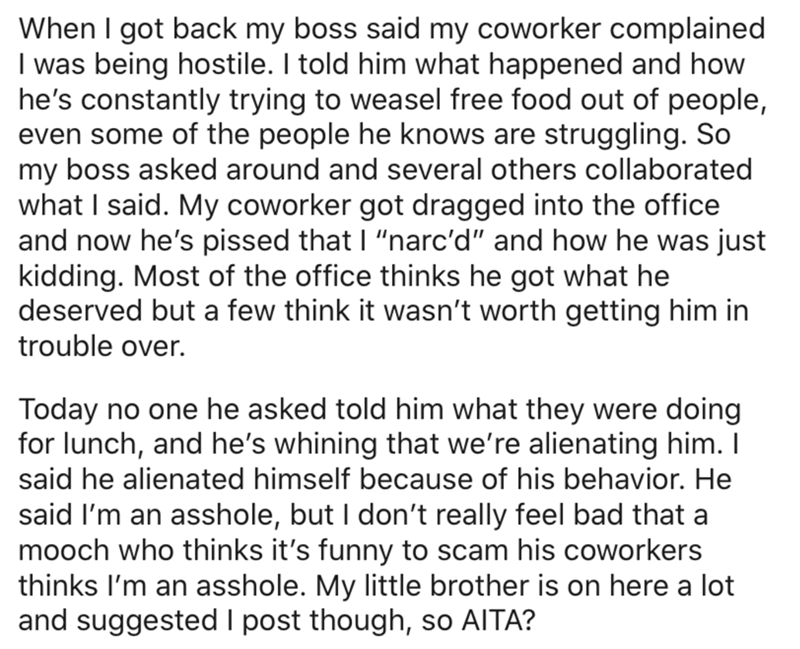 Looks like OP’s co-worker is a very mindless person and immature person. The way he blamed OP for not getting him free lunch and complaining about him to the boss is a pretty childish move. He only ended up losing respect and ruining his own reputation in the office. In fact, this situation turned out in favor of all co-workers this guy had been scamming for free lunch.  The OP is not the a*shole for standing up against what was wrong. Honestly, there should be two minutes of silence for those who think OP shouldn’t have told the truth. To find out what the Redditors think about this matter, scroll down and read their comments.

This isn’t an a*shole thing. 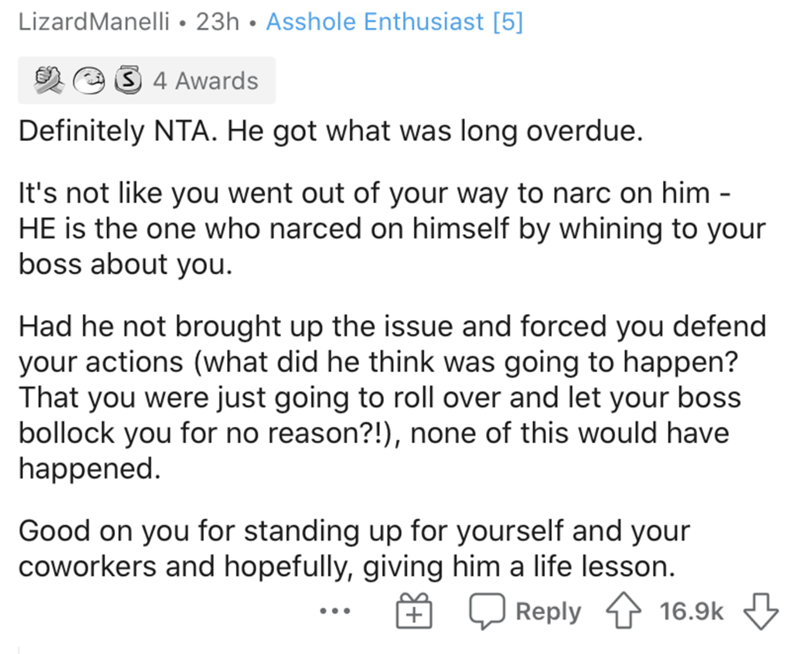 Now OP knows who to avoid.

What was he thinking?

Never ague with an idiot. 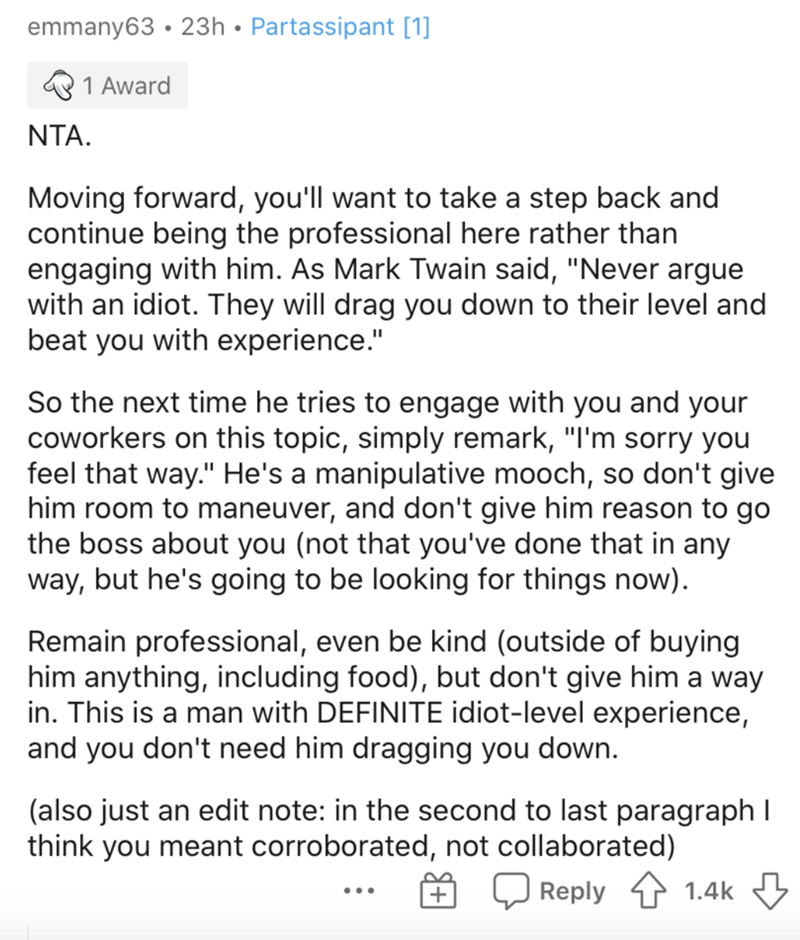 The “I was just kidding” card.

Now it’s lunch scammer’s turn to buy everyone some lunch. 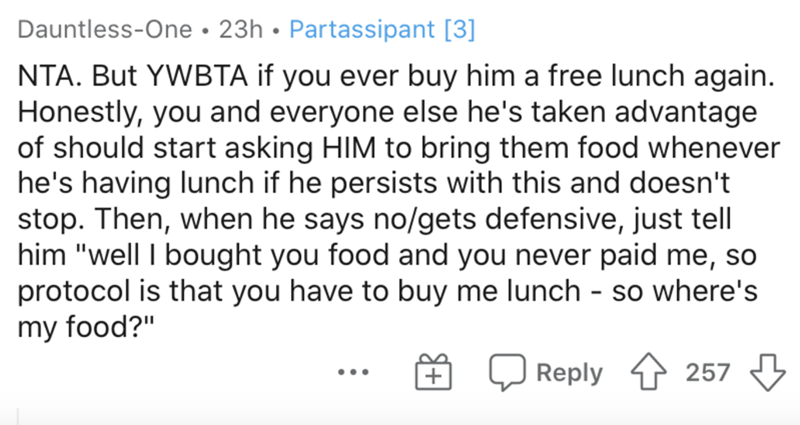 Good that OP stood up instead of backing off.

The guy should be embarrassed.

He got what he deserved. 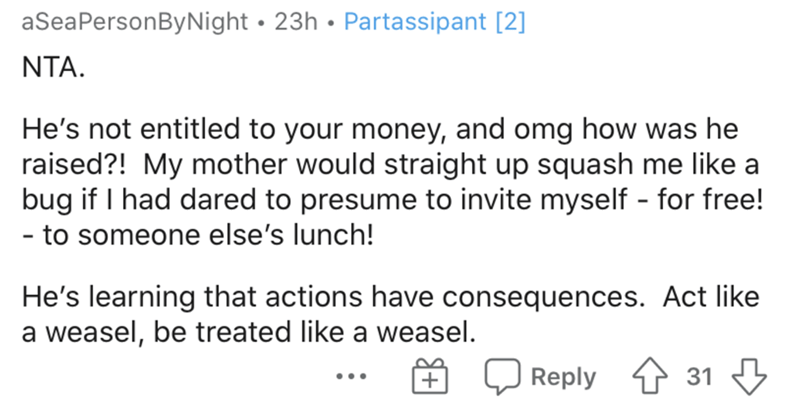 The a*shole was found.

The OP is wise.

Such know it all people are everywhere, and this is exactly how to shut them down. What do you guys think? Let us know in the comments below.