Let’s face it, some foods can never be unloved and there is no specific time to eat them either. We can eat them whenever we want and however we want. In other words, there is no saying no to out favorite food and we are never too old/ rich/ poor to eat them. Just like pizza, burger and mac ‘n’ cheese. No only these foods are tempting, but they also serve as comforting food to almost all. One is neither too rich or classy for them not too poor, it is a food loved by all. Whether one is a kid, a teenager or an adult, these foods are eaten by all.

However, some people think, eating mac ‘n’ cheese is not classy and it is a kids food. Although this is a completely absurd thought, there are no demographics when it comes to macaroni and cheese, but guess some people are trying too hard to fit into the so called “classy” community, by looking cool and eating “fancy”. As weird as it sounds, it’s true and it’s happening out there. We read a post on Reddit in the “Am I the a*shole” Subreddit where a boyfriend gets mad at his girlfriend for ordering mac and cheese at a fancy restaurant in front of his friends that he has known for a long time. He considered mac and cheese to be a little kid’s meal, while it was listed under the adults menu. He wanted his girlfriend to act as a “grown up” and eat something like asparagus and beef steak or something that would make them appear more rich and classy. This behavior of OP’s boyfriend indicates that he cares more about his own appearance than his girlfriend’s happiness. Scroll down to read the whole story. 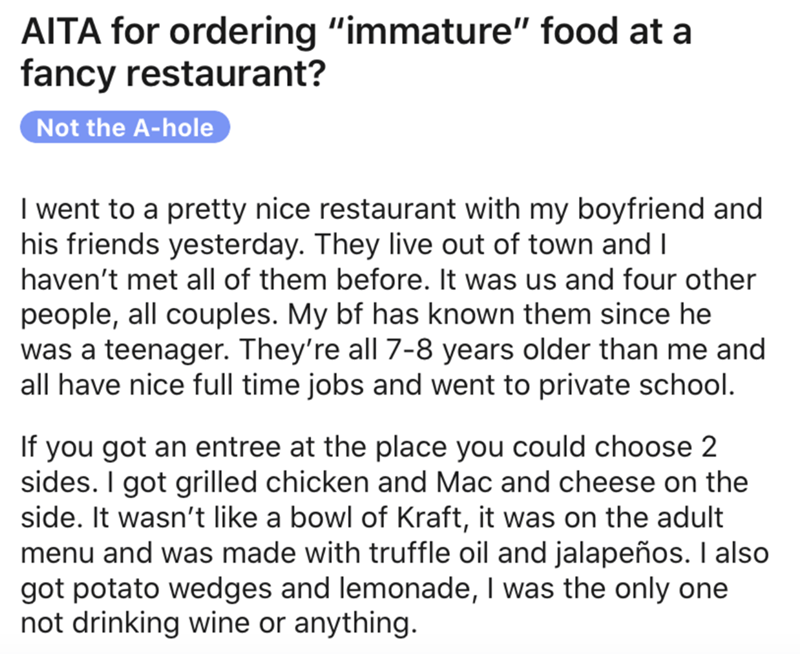 The OP isn’t into foods like Sushi and salads. 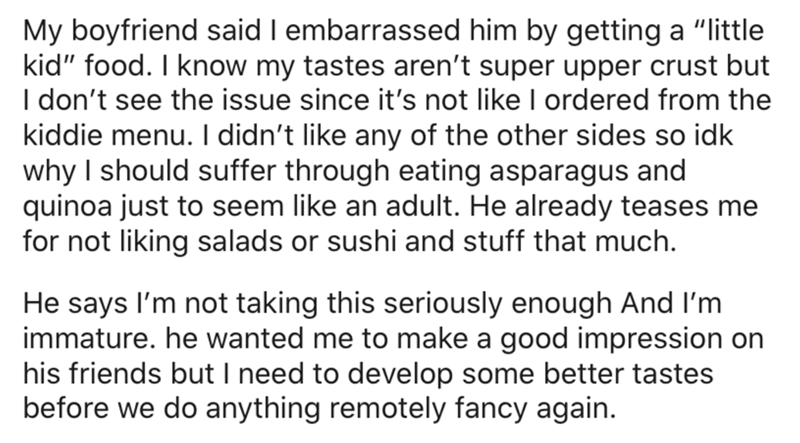 The OP had no intentions of embarrassing her boyfriend, but she’s just not into the kind of food he likes. 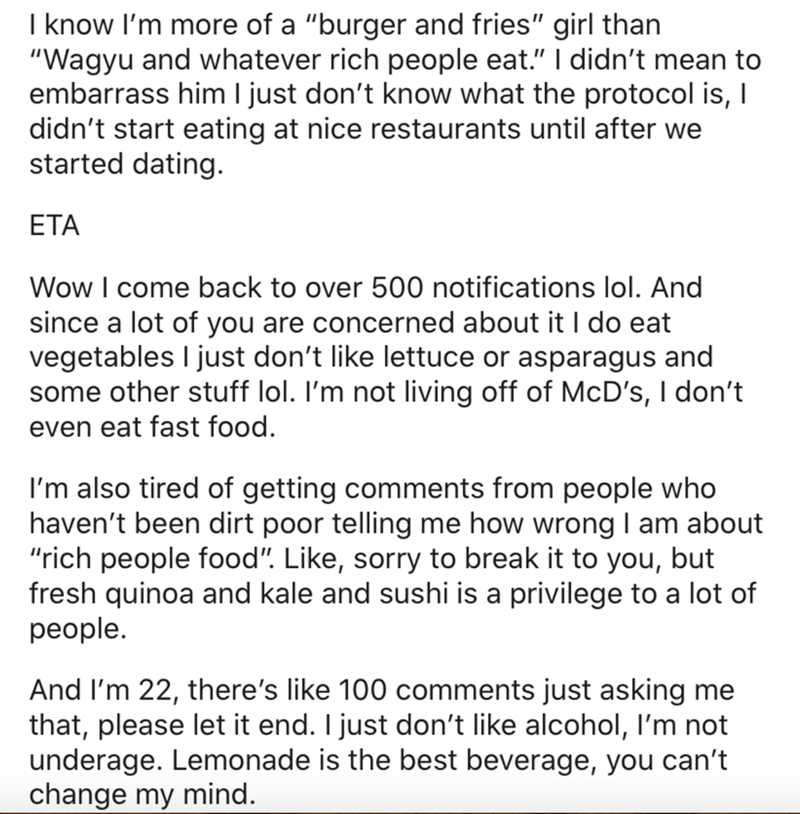 The OP is not wrong for ordering the food she likes. Being in a relationship doesn’t mean that one has to live by the rules of one’s partner. Being associated with someone doesn’t mean that one has no individual personality. We all have our own likes and dislikes. No one has the right to force us to do something against our will. Just for the sake of his classy appearance, OP’s boyfriend can’t make her eat the foods she doesn’t like. Relationships are about partnership and companionship, not about competition or dominance. The behavior of OP’s boyfriend is alarming and can be extremely troublesome as the relationship progresses. Reddit posts are never complete without the Redditors comments. Scroll down to read what they are saying about this matter.

Run away from this guy. 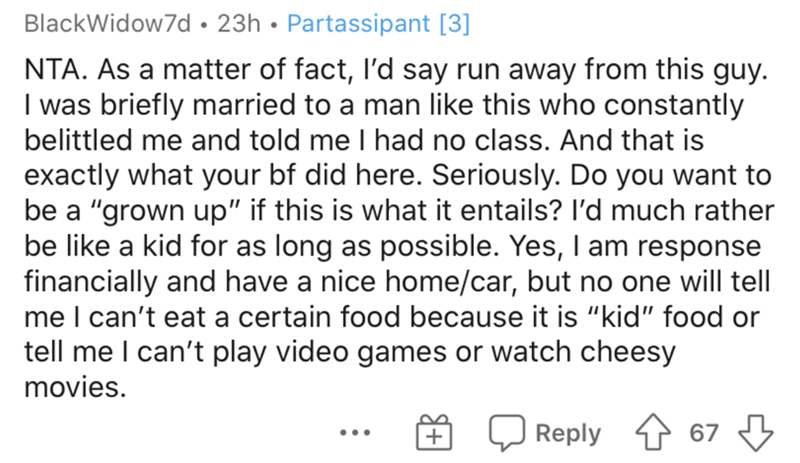 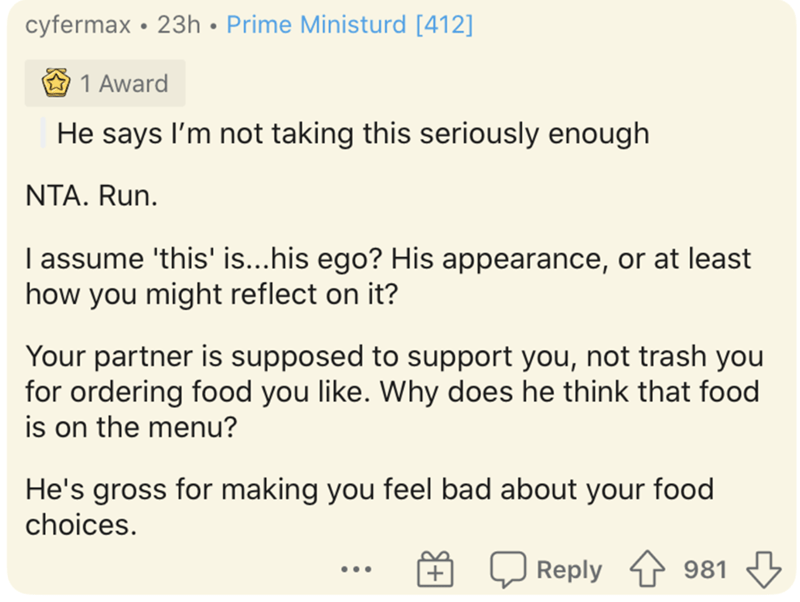 That may be due to the age difference between OP and her Boyfriend. 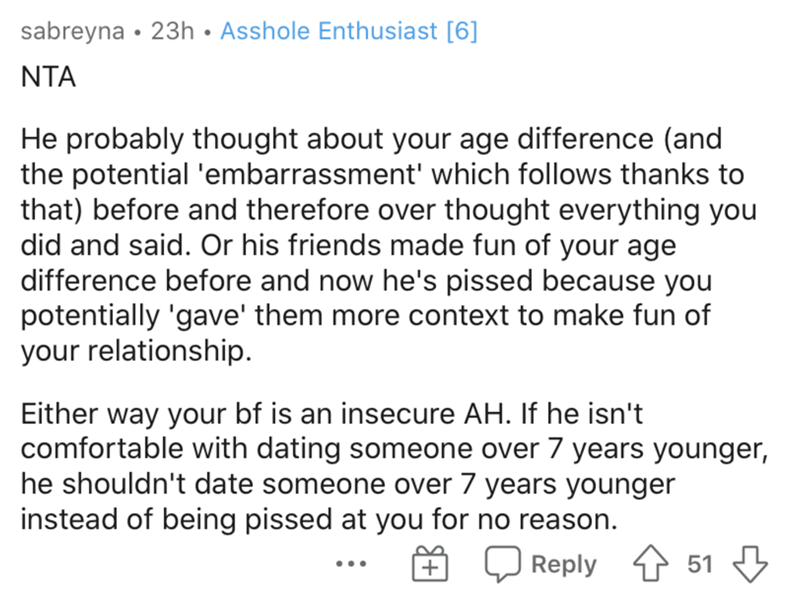 OP’s food choice shouldn’t be a problem for her boyfriend. 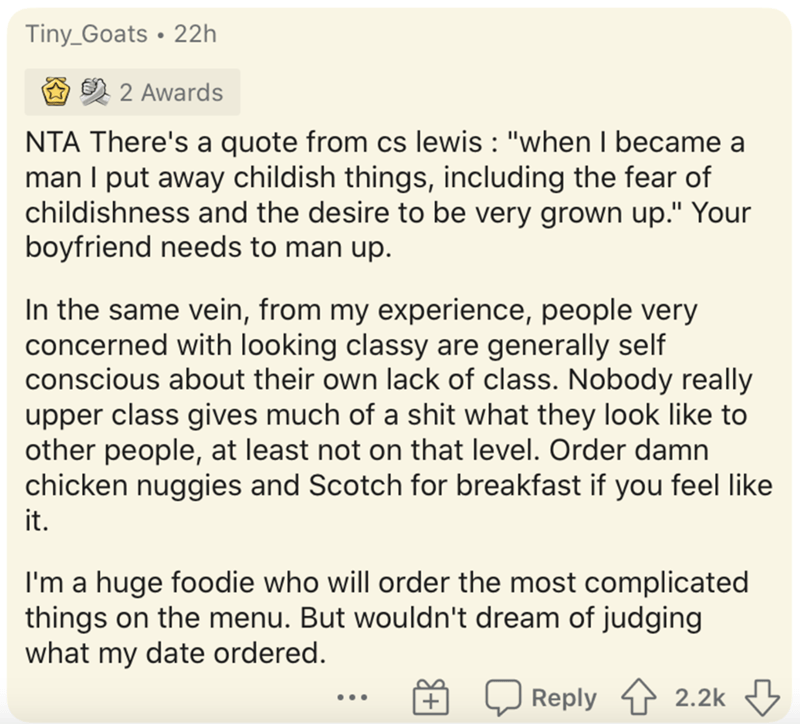 Well, that just made us hungry as well.

The boyfriend is acting crazy.

There is noting wring with ordering what you like. 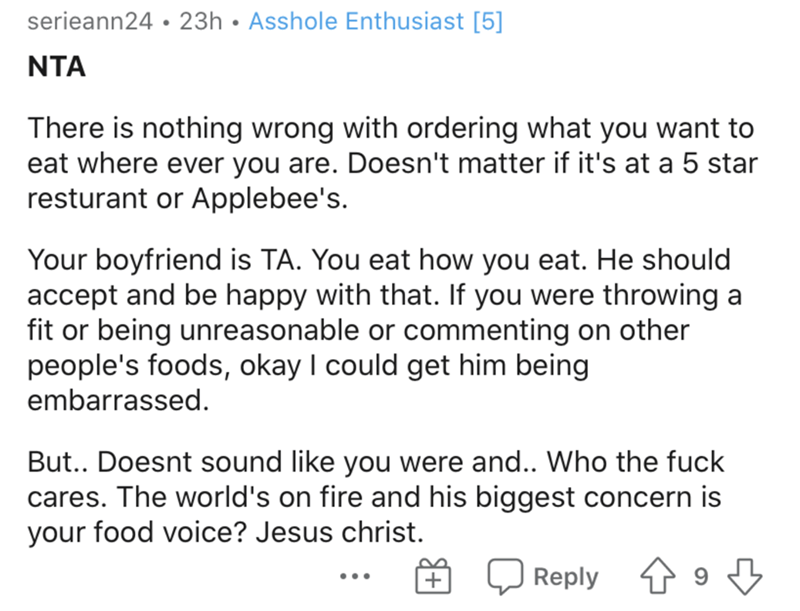 It’s all in the boyfriend’s head. 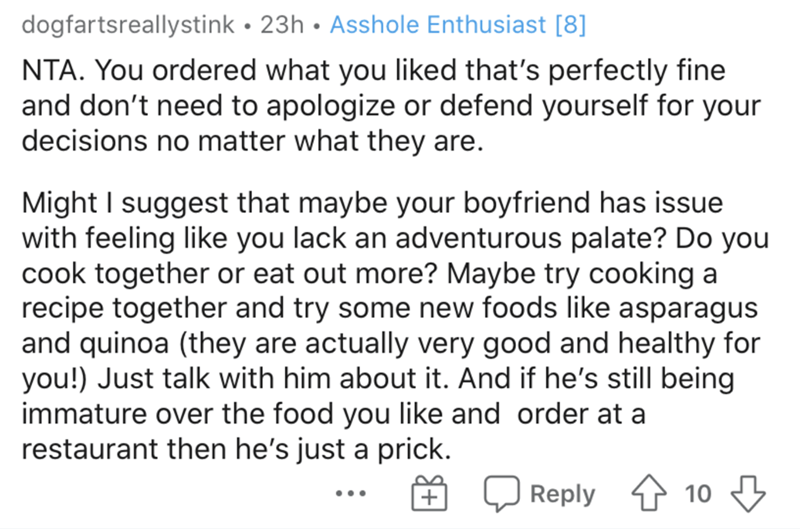 Mac and cheese is a food for everyone.

Boyfriend’s behavior is a red flag.

That’s why guys like to date girls younger than themselves.

Be experimental with food.

Mac and cheese is delicious.

Mac and cheese is the best. 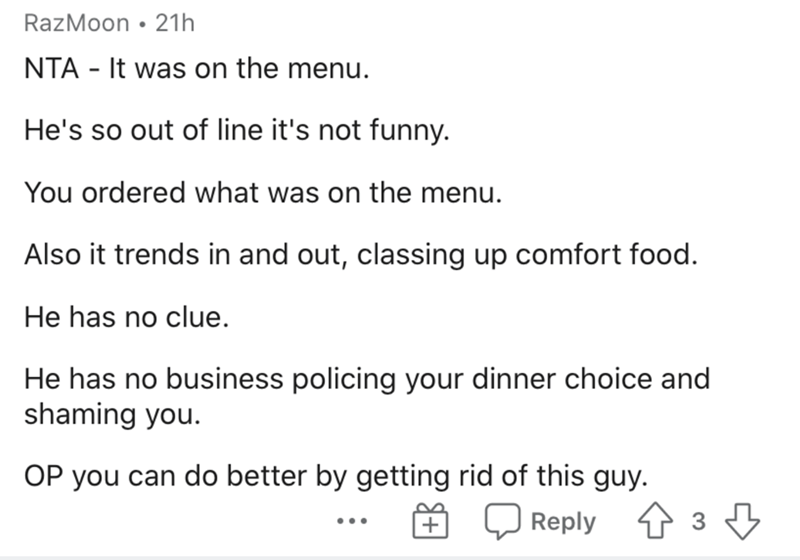 If he really loves OP, he shouldn’t be concerned. 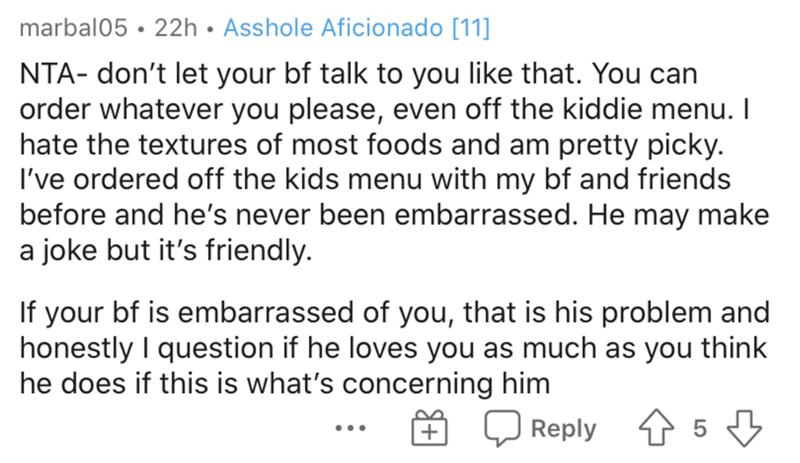 Boyfriend is a food snob. 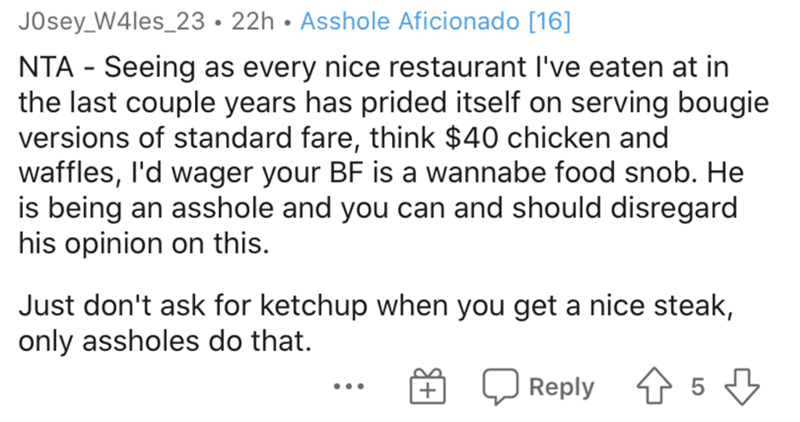 Such events are usually warning signs before the big explosion happens. Hope that OP gets out of such a toxic relationship before it’s too late. What do you guys think? Let us know in the comments below.