Influencers are really getting out of hand these days.

First of all, most of these self-proclaimed influencers aren’t even proper influencers, they are just some random people doing random things and thinking they are “it.” A lot of them use their so-called fame to exploit other people. They ask others to give them stuff for free in exchange for “exposure.” It is justified in some cases, but usually, they go overboard with their demands. The things they are demanding aren’t made free of cost. It takes labor and money that can’t be rewarded with just “exposure.” And in most cases, this exposure doesn’t help either. Influencers should really know their limits.

This influencer from the UK wanted to get a lot of free food and offered exposure in return. “Four legs“, which is a pop-up restaurant in Islington, London, decided to troll them in return. Maybe after this experience, the influencer would think twice before trying to exploit someone.

Looking at their food, anyone would want this for free. But hey, that doesn’t mean that we can. 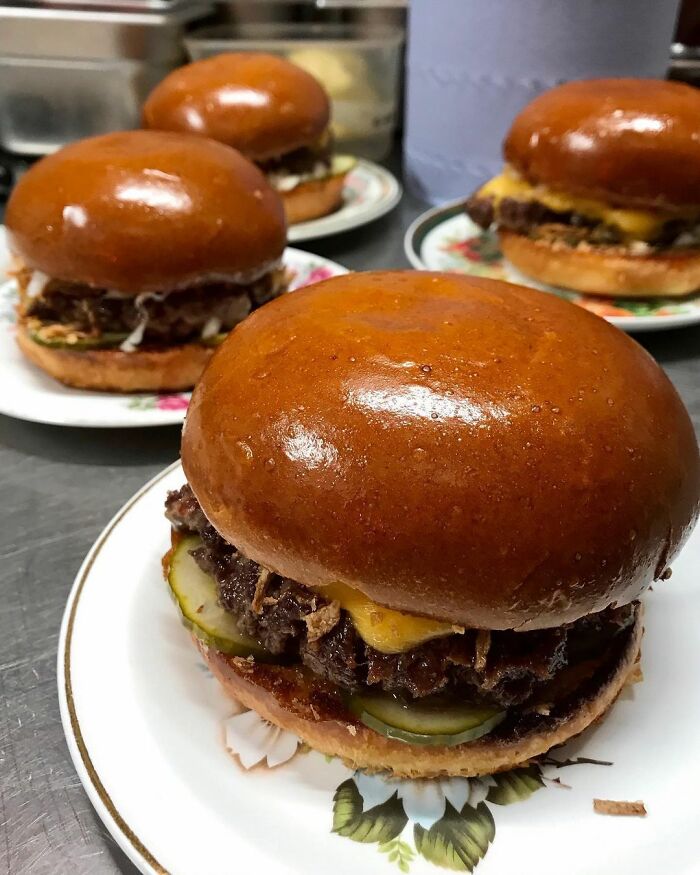 The influencer reached out to the chef duo running the restaurant and asked them for a free takeaway in exchange for exposure. 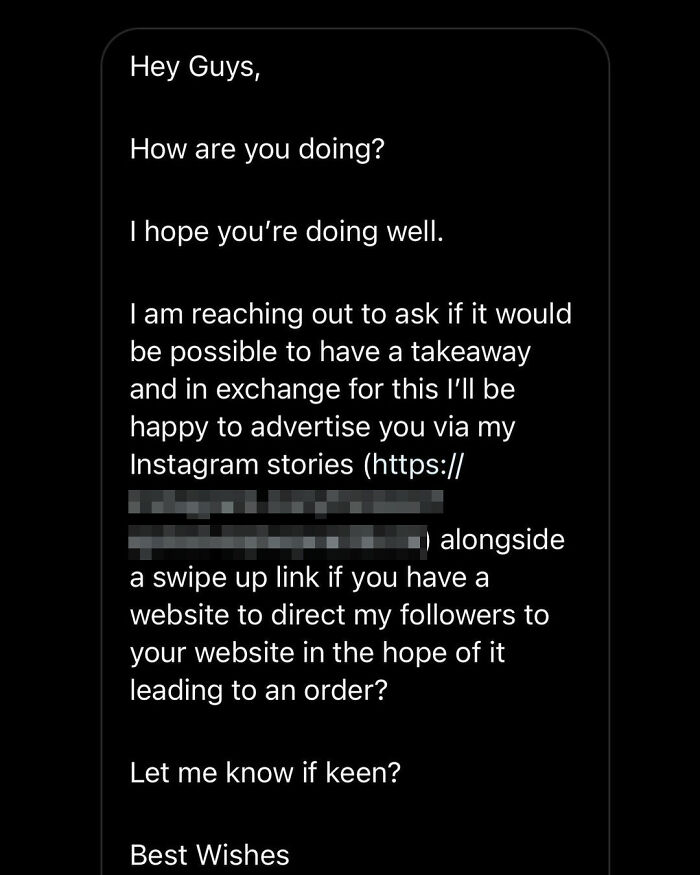 But then the influencer went overboard by asking for 5 meals, for their friends as well. 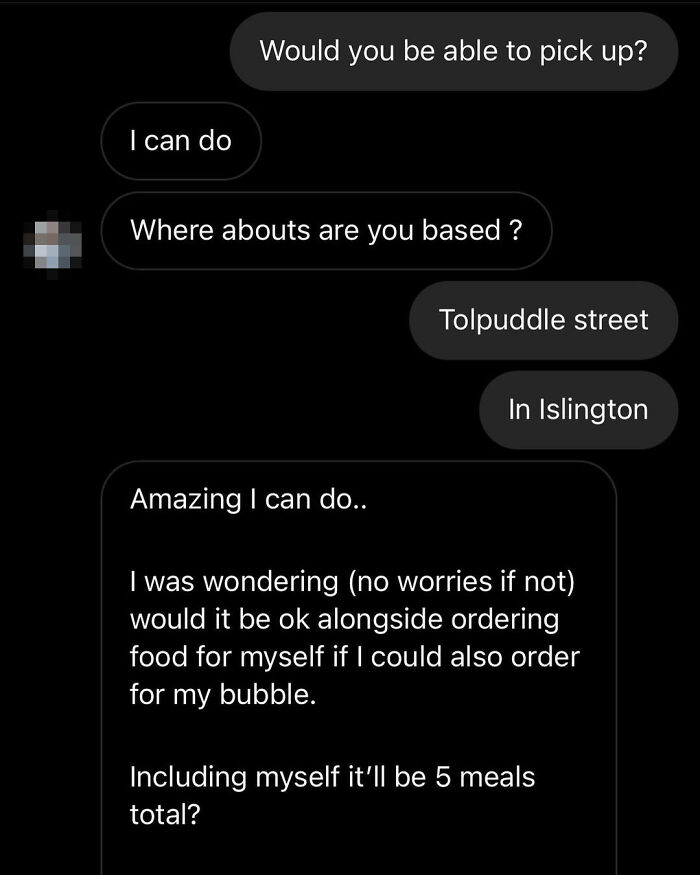 That’s when the restaurant decided to teach the influencer a lesson. 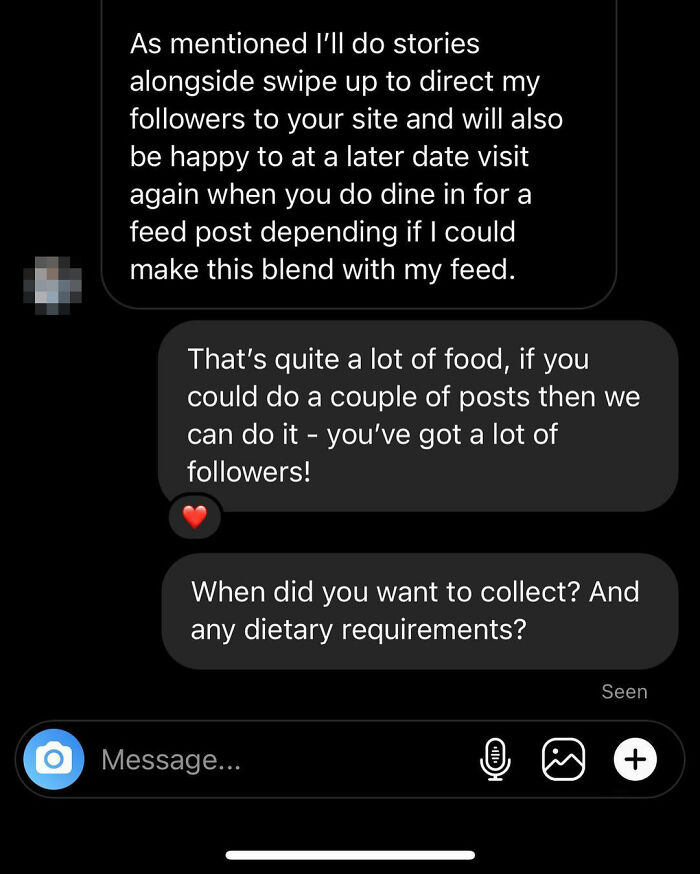 So the restaurant asked them to head over to pick up their meal. 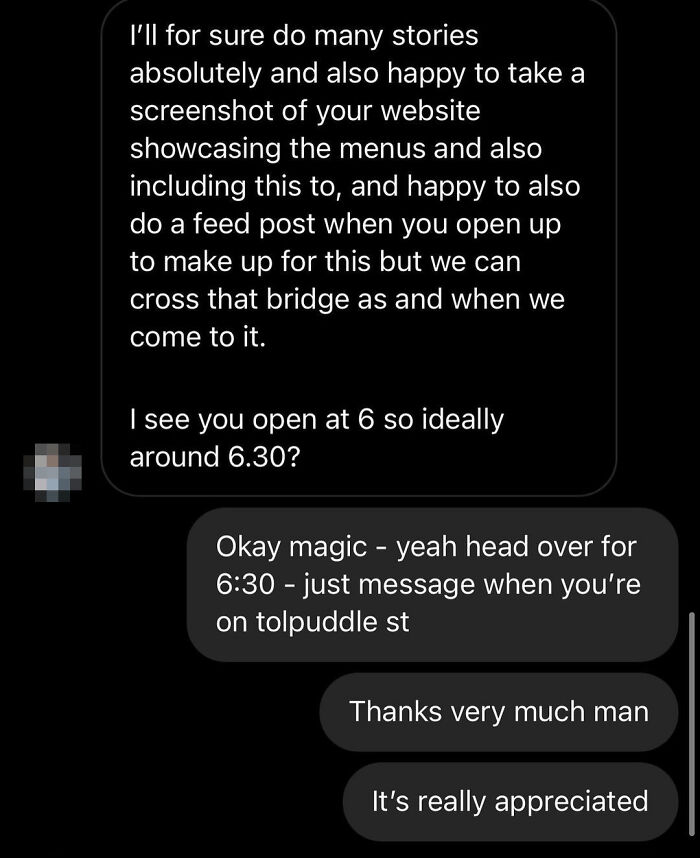 And then they asked the influencer to go to the police station and report themselves for crimes against the hospitality industry. 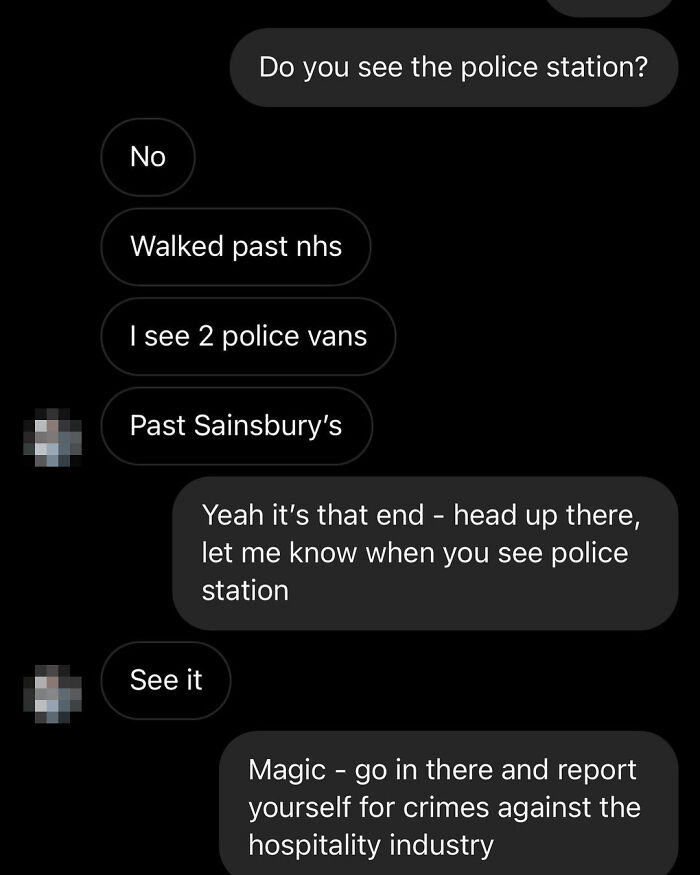 “Four legs” is running at a pub called The Compton Arms. The restaurant is run by a chef duo, Ed McIlroy and Jamie Allan. They are highly skilled chefs and you are guaranteed a good quality meal if they prepare one for you, according to Eater London. These chefs weren’t about to let some influencer disrespect them and try to exploit them. So they decided to teach the influencer a lesson that most probably embarrassed them immensely. There is no way you can find 5 free meals reasonable in exchange for an Instagram story. The influencer has been kept anonymous so they don’t receive too much hate from the Internet. The influencer currently has 50k followers.

“‘Four Legs’ bucks the current trends, championing meat across its concise changing menu,” the chefs said, and explained that they have their main attention on “quality, local, British ingredients.” But their menu is versatile and they offer “British fare with modern European and Asian elements.” Their ultimate goal is to make the quality and experience of classic pub meals better.

This is what other people had to say about the whole incident.

The restaurant was praised by everyone.

It made a lot of people happy to see someone teaching these “influencers” a lesson.

We hope that the influencer will stay in line next time.

Do you think the restaurant did the right thing? Have you ever come across an influencer trying to get free things from someone? Share your stories with us in the comments below.