This story is wild from start to finish, and it’s more like a movie than an actual story. In fact, it’s so surreal and so scripted sounding, that it just has to be a real story. There’s so much going on here, that it has the same energy as things that are so insane that they’re genius, so ludicrous that they just have to be real. It all started when this man saw a woman struggling to swim in a lake.

Him being the good person that he was, notified his wife of it, took some gear, and swam her to shore. She relayed her events to both the husband and wife about what she was doing there, and they were sympathetic. But turns out, they were also misled, because the woman told them that she had a boyfriend who was super messed up that she was running away from. The truth was something else entirely.

#1 Why she topless though? 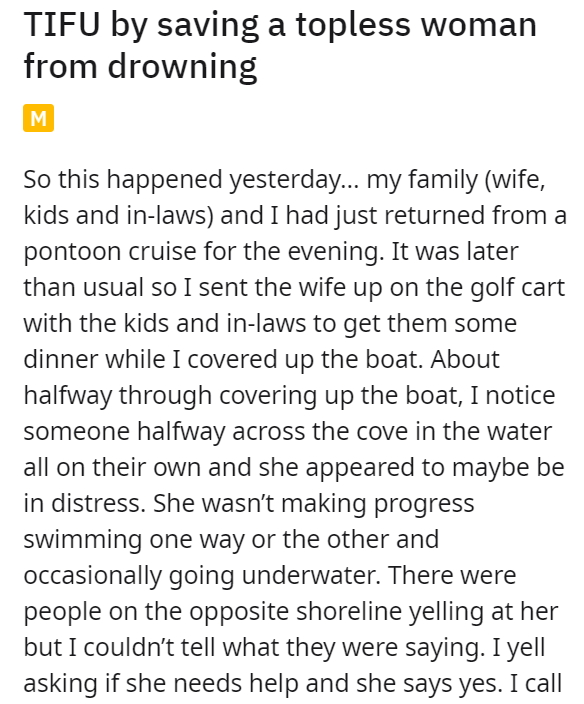 #2 First thing she says too. 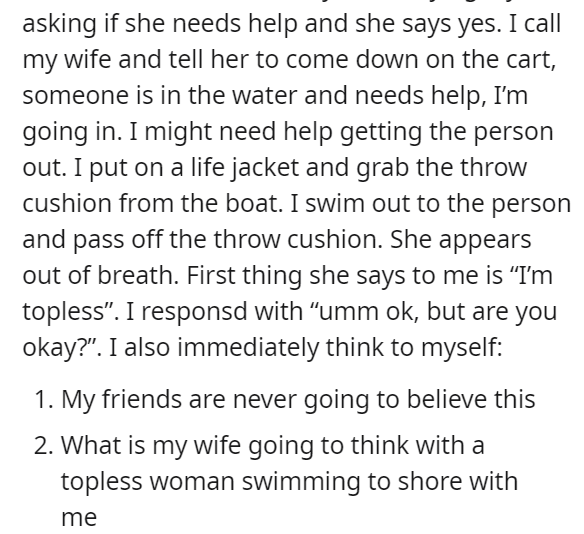 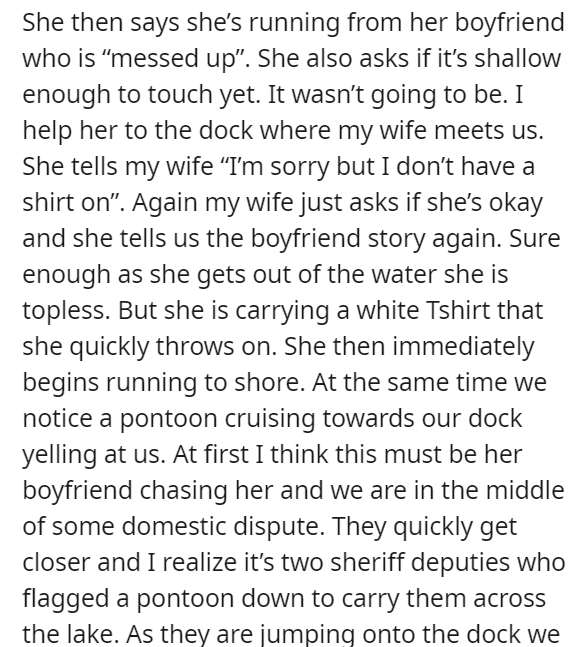 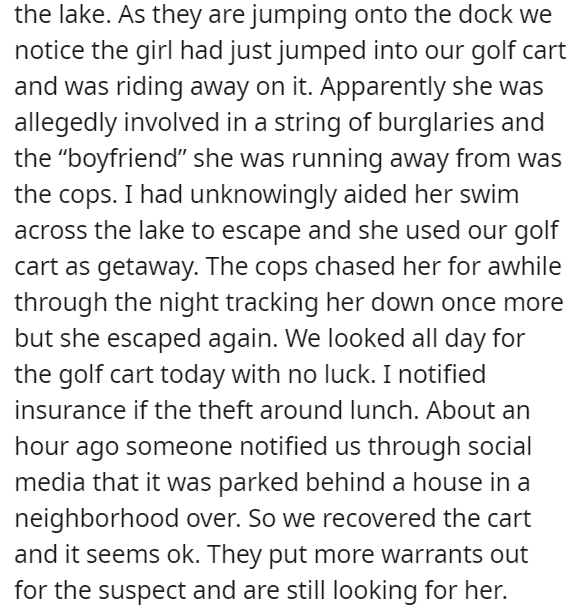 #5 You could make a movie out of this.

People told their own stories too, here’s another:

About 20 years back I was broke and had an unreliable old Cadillac that I had to drop off at a repair place. My wife was supposed to pick me up when I was ready to come home but she wasn’t answering her phone. I waited about an hour and then decided to start walking. It was about 4 miles and I figured it wouldn’t kill me if I had to walk all the way (I don’t remember anymore why she didn’t answer).

After about a mile a guy going in the other direction slows down and asks me if I need a ride. Normally I’d say no but it was hot as fuck and I was realizing I’d made a mistake deciding to walk. So a accepted. He pulled a u-turn and picked me up. Then he pulled another u-turn and went back in his original direction. I told him it was the wrong way, that I lived in the direction I had been walking. He said, “Yeah, I just need to make a stop real quick.” Little alarm bells but I figured he was just gonna get some gas or something.

So we’re driving in a direction that is NOT toward my house and he looks at me and asks, “Do you have a driver’s license?” WTF?, I think. I’m not driving! That’s the whole point of needing a ride! I kept quiet but was getting nervous.

Finally he pulled up into a Home Depot parking lot. He parked and said, “I have some things in the trunk I need you to return. I don’t have the receipt so I can’t return them without a driver’s license. You have one so I need you to do it.” Why are you driving with no license??

Back then I was a huge softy and would do anything for someone in need but this did NOT feel right. My spider sense was tingling. I told him. “I don’t really feel comfortable doing that.” I was pretty freaked because he was bigger than me and could have been violent… who knows? He got pissed and cussed a little but he got out and grabbed the stuff from the trunk and went into the store.

I saw a chance to extract myself from this sketchy situation so I hopped out of the car and started jogging across the parking lot to the building next door. A Sam’s Club! I was a member and this dude probably wasn’t. So I went inside and waited there. After about another 90 mins I got hold of my mother-in-law and she came and got me.

Here’s the clincher. My MIL was a newspaper reader and the next day she saw that a guy was arrested at Home Depot for trying to return stolen merchandise.

So that’s my story.

TLDR; I hitchhiked and got picked up by a guy who wanted me to return stolen merch. I refused and he tried it but got busted.

What about you? Do you have a story like this? Tell us down in the comments!