Everybody gets frustrated once in a while.

And while it falls upon us to control our anger and frustration, that is not to say some people just don’t bring out the worst in us. I am definitely not blaming another person for one’s own problems with anger and blowing up at little things. However, this story is clearly not about cheap coffee. Sometimes things just keep adding up and you blow up at the dumbest things but that is indicative of a bigger problem in the relationship.

I am well aware that this man’s wife didn’t get him the coffee as he’d asked and he essentially walked out and went to his sister’s house. This may seem like he over-reacted and perhaps he did but we don’t know the truth behind their relationship. So scroll on below and you can see for yourself.

I can understand giving your significant other an allowance if they earn less but this sounds unreasonable. 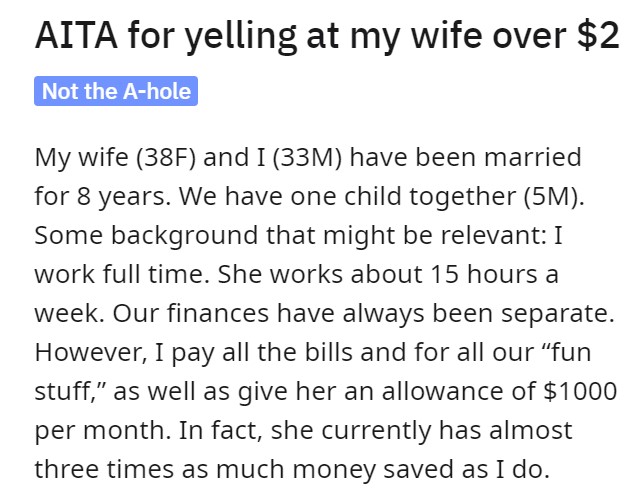 However, this instance seems normal enough. Who doesn’t like a discount? 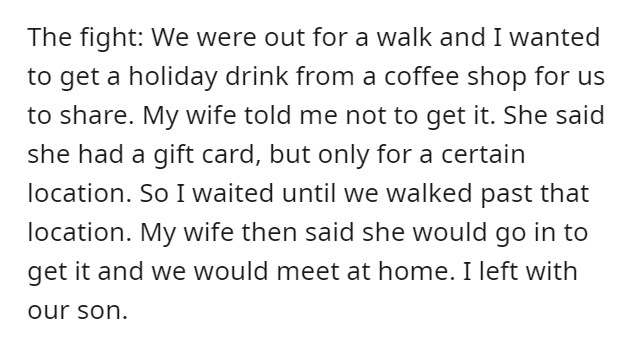 Honestly, any normal person would buy the coffee regardless or else call and ask rather than doing this. 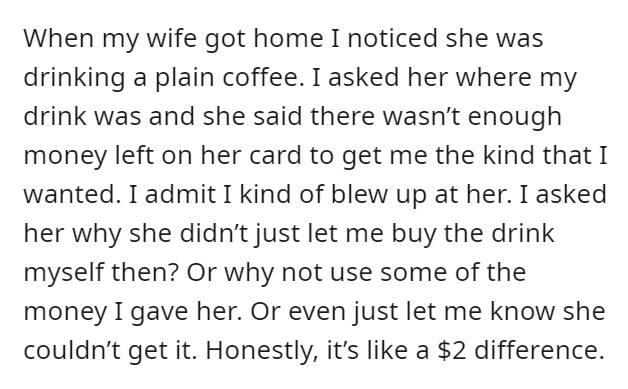 NTA – yeah it’s $2 but seriously?? Who does that! Who tells their partner oh no I have a coupon to save money on your drink (that I’m guessing you were likely to pay for in the first instance as it comes under fun stuff?) to then return with not only no drink for you but a drink for herself when you were the one to want a drink in the first instance? It’s not about the $2 it’s about the principle of telling you no to then only think of herself.

Even if she’d bought you the plain one and was I’m like I’m so sorry I didn’t have the extra on me but I hope this is ok then I imagine everything would’ve been fine, yeah you wouldn’t have gotten your specific drink but at least she’d apologized and had still brought you one. It sounds like you were hurt by her lack of consideration more than anything which is completely understandable. –SnooDonuts5467

He may have overreacted but she is clearly very inconsiderate.

It is something very small but represents a huge problem hidden beneath. 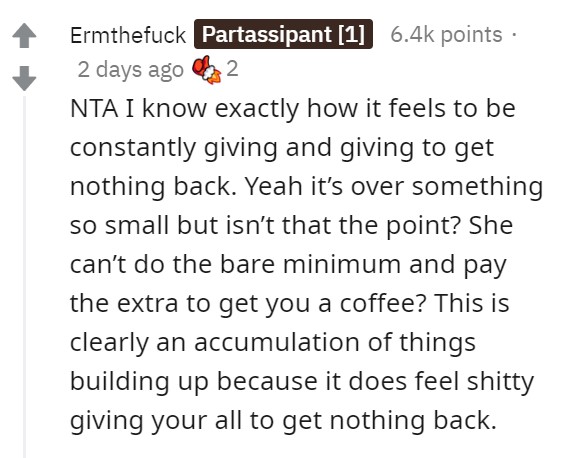 And getting things for your loved one is a form of showing you care. 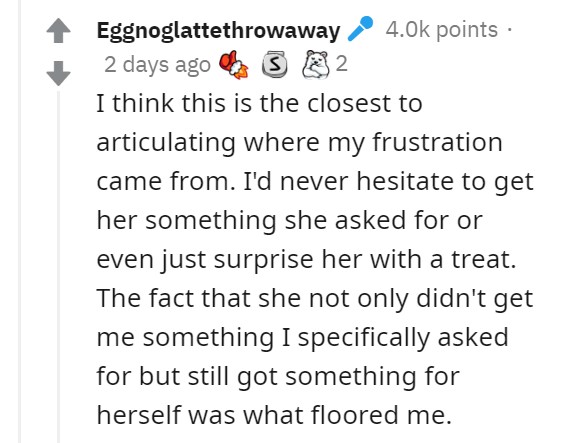 She has clearly gotten used to being the first in this relationship and doesn’t care about him as much. 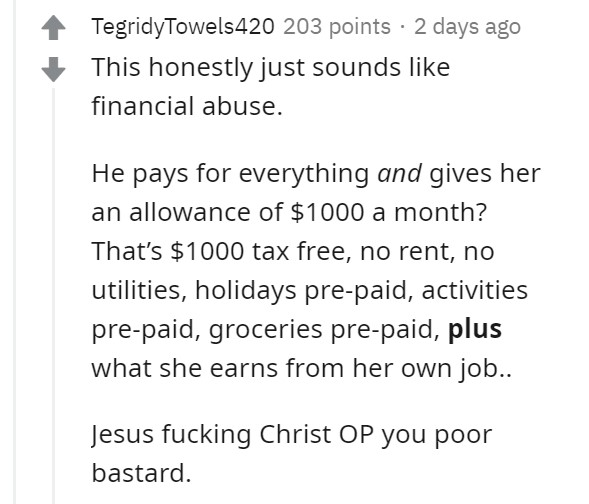 Exactly! Even if you didn’t give her money, she could have spent her own cash. 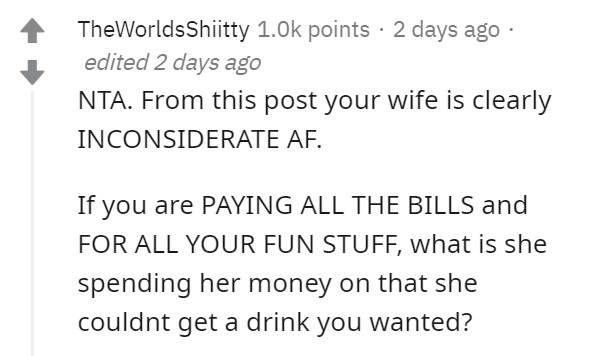 She needs to get a taste of her own medicine to understand his side. 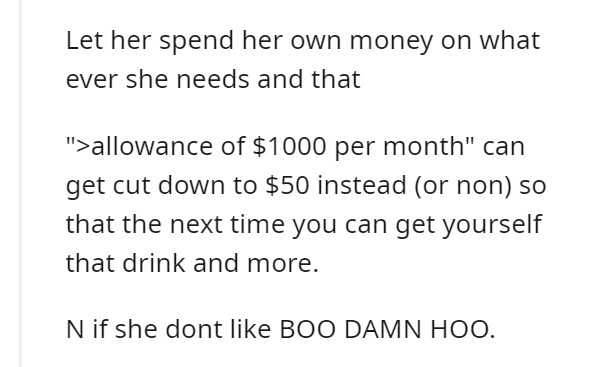 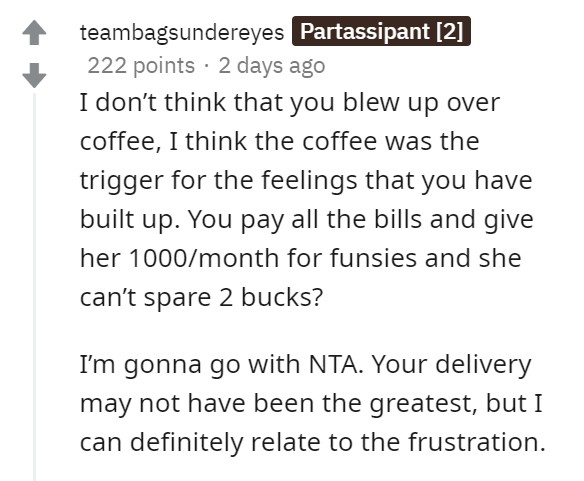 And sadly enough, that sounds like the near future. 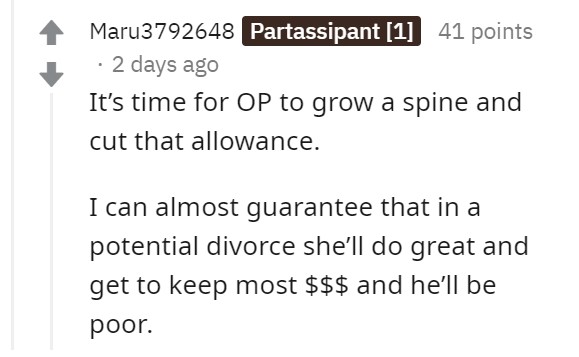 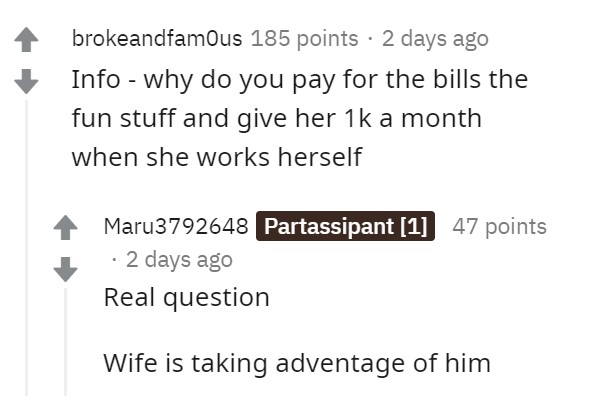 Yup. When financial situations change my partner and I sit down and figure out a new and fair way to manage our money and our money is completely separate.

For example, we do proportional rent and bills and then the higher earner normally ‘treats’ enough that the remaining difference is negligible.

What are your thoughts on this scenario? What do you think he should do? Comment down below and let us know.