Nobody likes an entitled customer.

And Karens are basically an epitome of entitled customers. They will not only force you to do a job even though that is not your responsibility but they will also insist that you are wrong along the way. And if you try to correct them, they will just double down on it and start screaming like a banshee. This may seem like an overdramatization but after reading as many stories as I have, I have come to expect the worst.

Toda’s story is not helping either. You know those people who insist that you work at a particular place? even though you aren’t wearing a uniform and just minding your own business? Well, this Karen falls into this category and she screams until the manager is willing to listen to her. Now, the way this was handled by the manager was less than satisfactory and you can read all about that by scrolling below.

First of all, we have an explanation why this woman thought this girl was working here as she had worked at the place before. 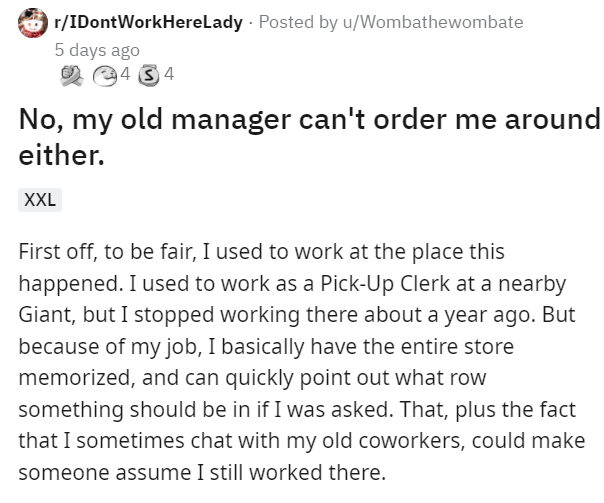 It all started when a polite person asked this girl for help and she was happy to oblige. 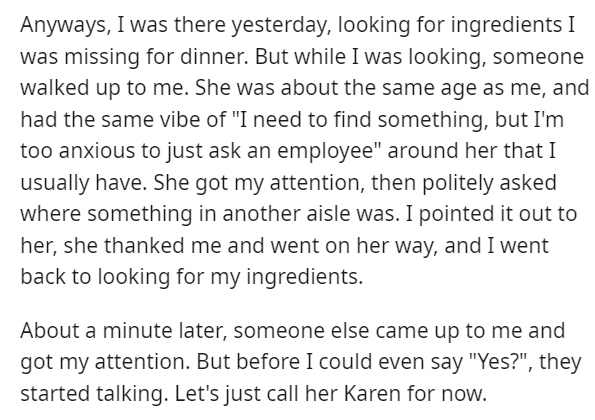 But that is when Karen stepped in and started imposing on this girl just because she thought the girl worked there. 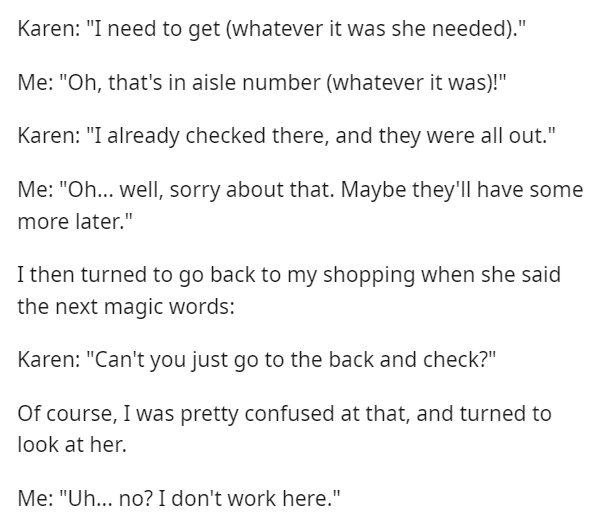 So even when the ex-employee told her that she doesn’t work here anymore, Karen obviously doesn’t believe her. 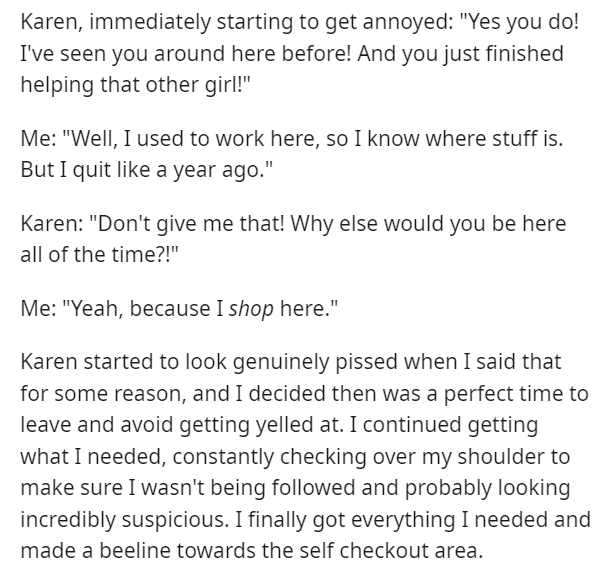 I have never understood the thought process that leads these sorts of people to this conclusion. For example, if a person approaches me when I am shopping and asks me politely for help, I usually help them, not because I work there but just because that is what is called a decent human being. But apparently Karens don’t understand this simple fact.

But the girl simply ignores and gets on with her own checking out. 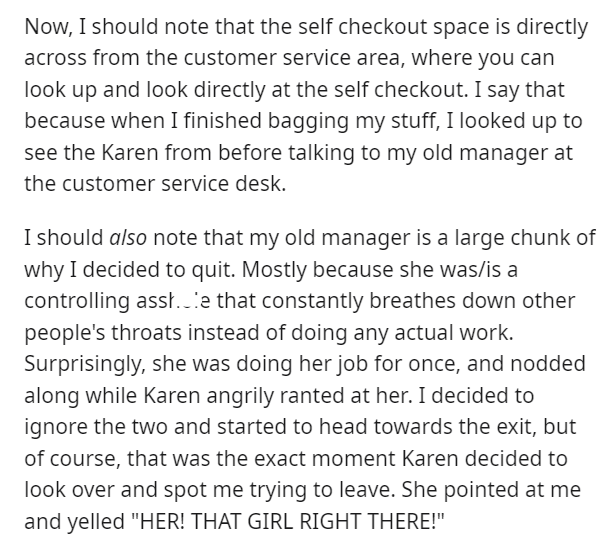 The Karen had obviously gone to the Manager by now feeling smug about this. 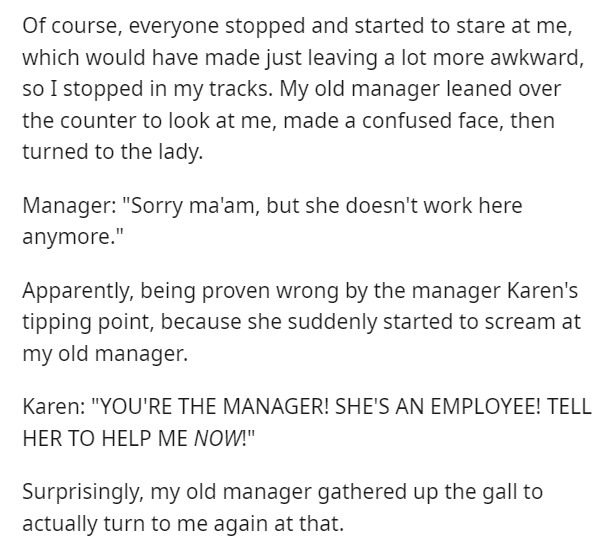 And surprisingly enough, the manager turned around and actually asked her to help the woman even though she had quit the job a while ago. 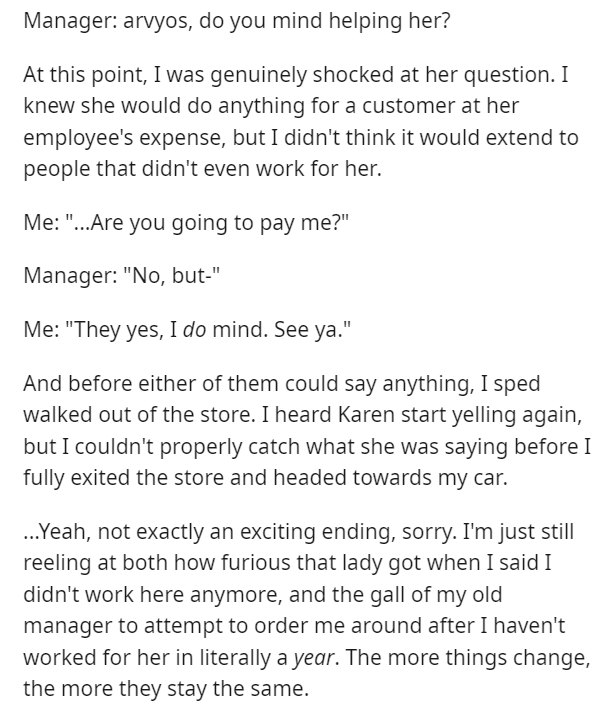 Life confuses some people. Like the attorney who put a new car with LoJack system in his basement, then reported it stolen. The police tracked it to his basement, just as LoJack was built to do. Or the radio DJ(s) who announce that the station has just gone off the air due to transmitter failure. (Is it his ego that puts his voice in my radio?) The person who asks a graphic artist to show the car that is on the other side of the barn in the picture. Ever try that with the picture on your desk?

Albert Einstein said it so well, “Two things are infinite: the universe and human stupidity; and I’m not sure about the universe.” –ElmarcDeVaca

And as you can imagine, even the comments were angry on this girl’s behalf and I can 100% understand. 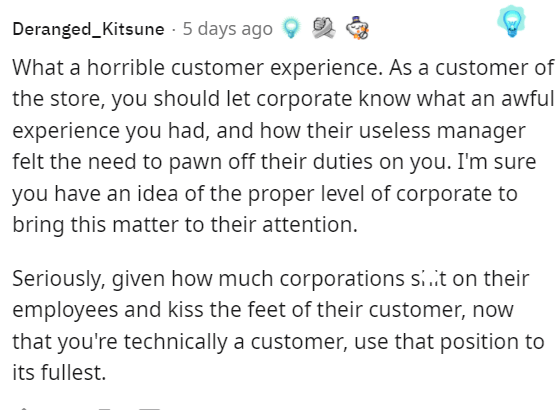 Have you ever been in a similar situation? If so what did you do? Did you try to diffuse the situation? Or did you let your anger out on the person who had incited it? Comment down below and let us know.