We challenge you to look away from the screen once you have laid your eyes on this multicolor eyes Scottish Fold puss!

Time and time, on this platform, we have praised so many kitties, we laughed at them together, and even cried over some sad moments. But we all have always mutually agreed, or at least most of us, that cats are the most beautiful creature ever!

I cannot go without cuddling that cute little furball. It is an irresistible temptation to always pet the kitties and show lots and lots of love and affection.

Well, today, we have got something completely out of this world for you. It is a cat, don’t worry, no aliens yet. But it’s the purr-fect cat!

This pure white Scottish Fold, Moji, is a round face fluffball that is an icon on Instagram. We were already sold at the white round fluffy face but what makes the internet go crazy about this kitty, is her multicolored eyes! I KNOW RIGHT?! This cat has a complete heterochromia and we absolutely love it about her.

Ladies and Gentlemen, we present you MOJI! 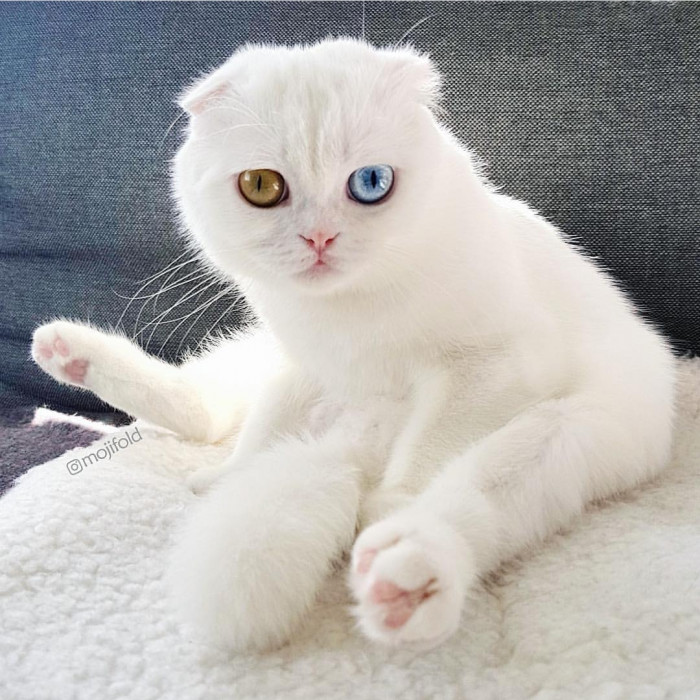 Moji has over 50,000 followers on the internet. This 3-year-old Scottish Fold has gained a lot of popularity over the internet over time. She owes her specialty of having multi-colored eyes to a genetic modification in her genes, it’s called complete heterochromatin.

Have you ever seen a cat this photogenic? I mean, she’s not even trying. Cuteness overloaded! 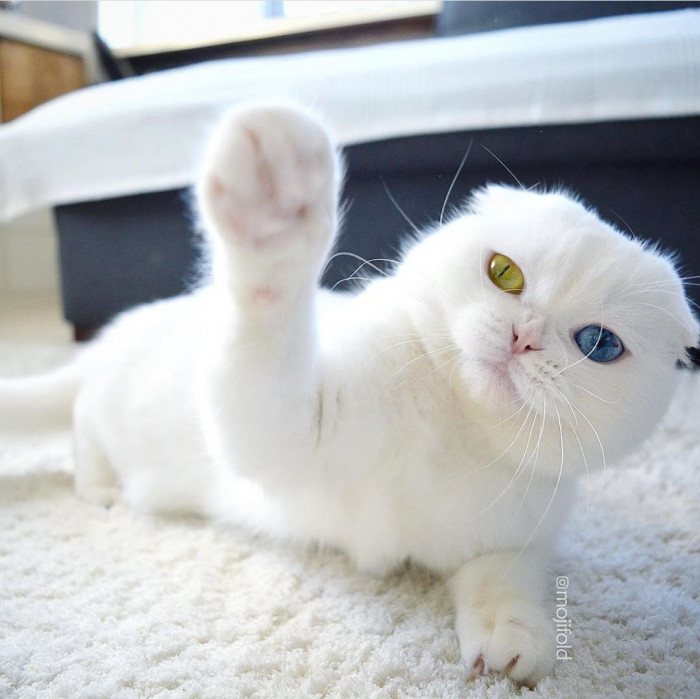 What makes Moji’s face entirely round like a snowball, are her rounded ears. That she also owes to a genetic modification in her hereditary by which the cartilage in her ears allows her to fold them.

All this Insta fame has taught Moji how to bring out her good angles! 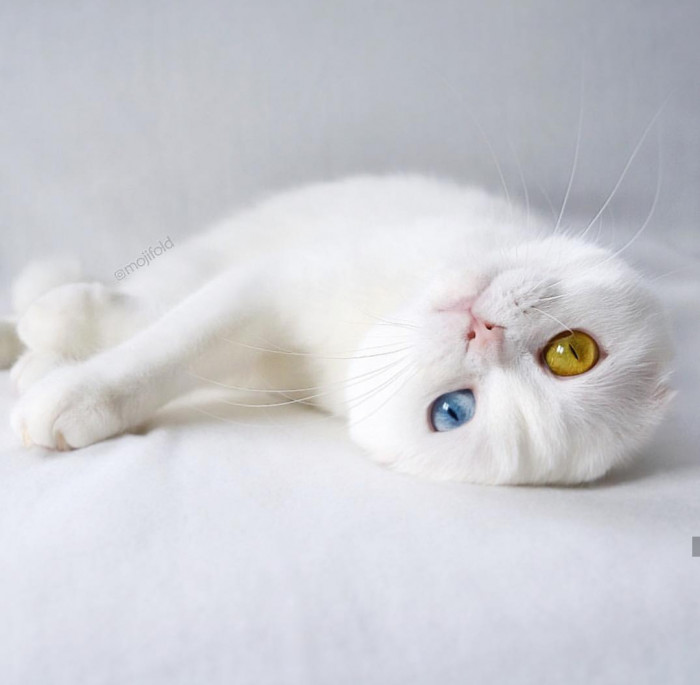 Moji is living the perfect life. She gets all the love and affection which is rightfully deserved, from her owner. Upon being asked about how Moji and her owner got united, the response makes Moji even cooler.

They said, “Moji flew to me from Russia. I met her at Schiphol, Amsterdam. It was love at first sight.”

Her owner further said, “She likes to cuddle and grooms me back! She sits in funny poses cos she is a Scottish Fold.”

Moji gets involved in everything at home. We love that cute bow tie! 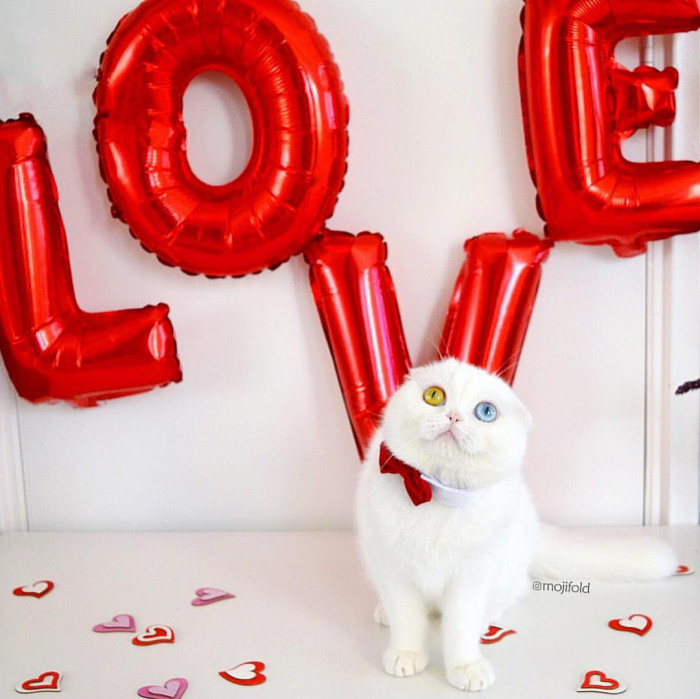 With all this fame that Moji has gained over time, it is no question that at least some sort of attitude was bound to come with it. We will let this next picture do the talking.

“Kiss my purr-fect, Scottish behind, hooman.” We had to! 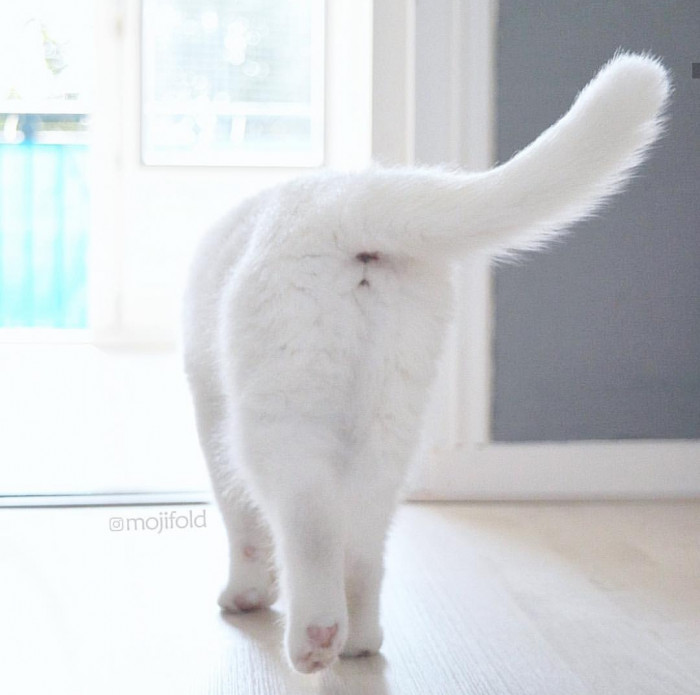 The history of a Scottish Fold gets dated back to 1961, where the first one was found on a farm in Scotland. Her name was Susie. Out of her beautiful kitten, only two had the same genetic modification of folded ears, and out of the two, just the one went on to bread more Scottish Fold. That kitty was named Snooks.

The hereditary of Moji, along with all the other Scottish Fold of the world, can be traced back to Mama Snooks and Grandma Susie. 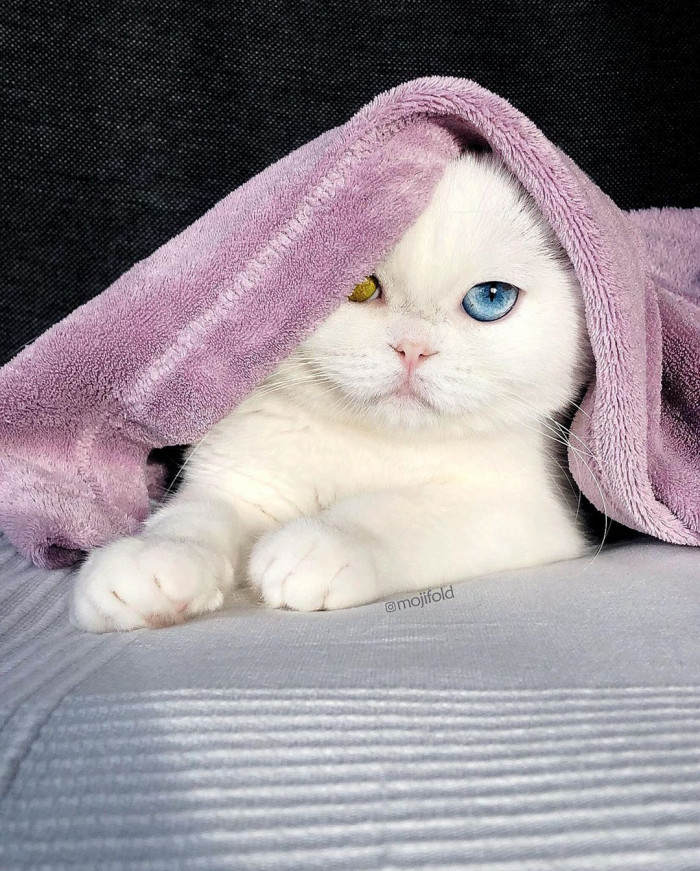 Upon being asked about what kind of toys does she like to play with, the owner replied, “Moji’s fav toy is her mouse toy with feathers called Billy.” “She plays fetch with her mouse Billy and she likes her liquid snacks like no other!”

Remember that thing her hooman said about different poses? Yeah! 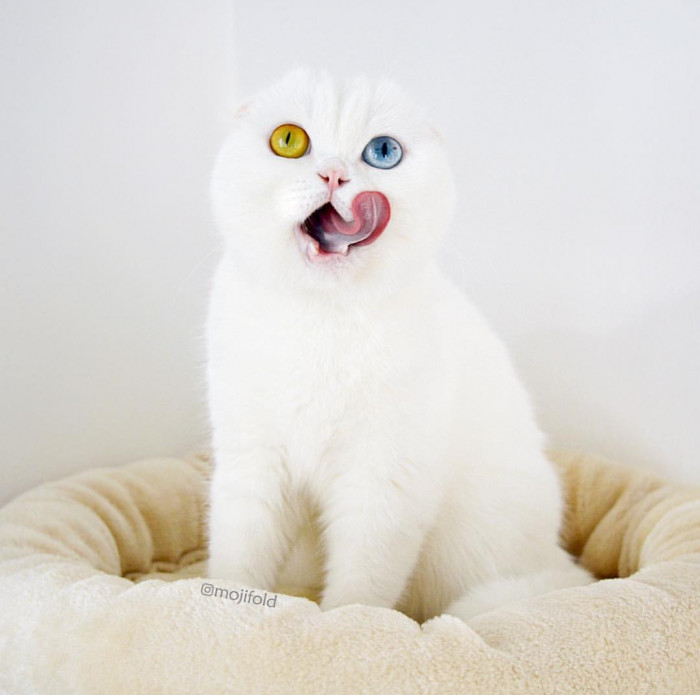 This gorgeous cat has earned all our respect and more. We wish her all the best in life and we believe such kitties never deserve a life that they spend all by themselves. They are supposed to live around other animals, other hoomans, and enjoy the whole concept of harmony and affection. 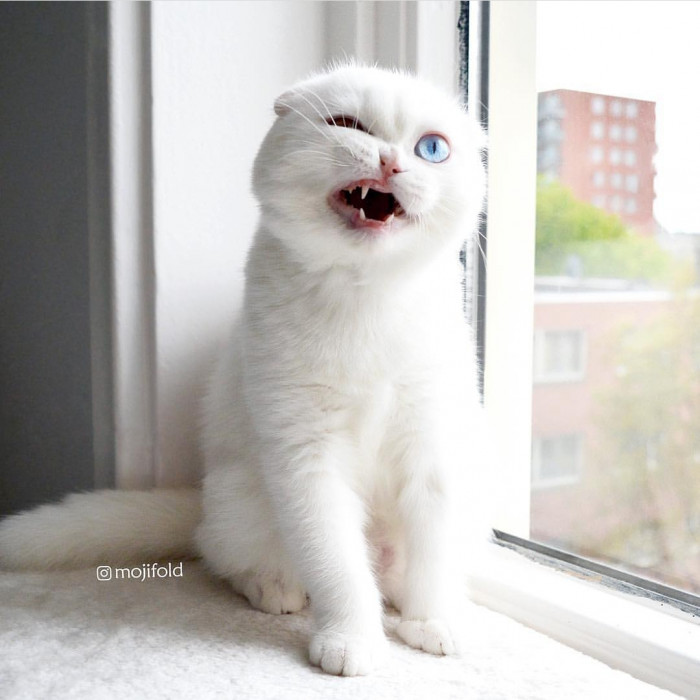 We hope you enjoyed this article. What are your thoughts and opinions about this beautiful Scottish Fold? Let us know in the comments down below. Brb, time to find one for me.