In today’s world, living in a society is now a challenge. Especially, in the Co-Housing society. People don’t know how to mind their businesses. While some people don’t even bother with what’s going on around them. Contrarily, we see strangers knocking on others’ doors for little minor things. What the reason is, God knows! But, it’s quite frustrating. We all know that.

Likewise, a writer named Ashley Woodfolk wrote about the incident she faced in the courtyard garden where she resided. She had a bizarre interaction with one of the co-op board members who tried to become a Karen. But Ashley decided not to let go of it so simply and planned an ironic yet sweet revenge. Ashley certainly knew how to deal with the situation.

On her Twitter’s account, she stated: “GOOD EVENING TO EVERYONE EXCEPT the woman at my co-op who complained to the board about me and my toddler using sidewalk chalk in the courtyard. So I wrote her a little letter. In sidewalk chalk. In the courtyard.” She also shared a picture of a massive letter that she wrote across the ground in the co-op’s courtyard!

The letter caught communities’ attention before Karen. Everyone passer read the letter. The letter she wrote was: 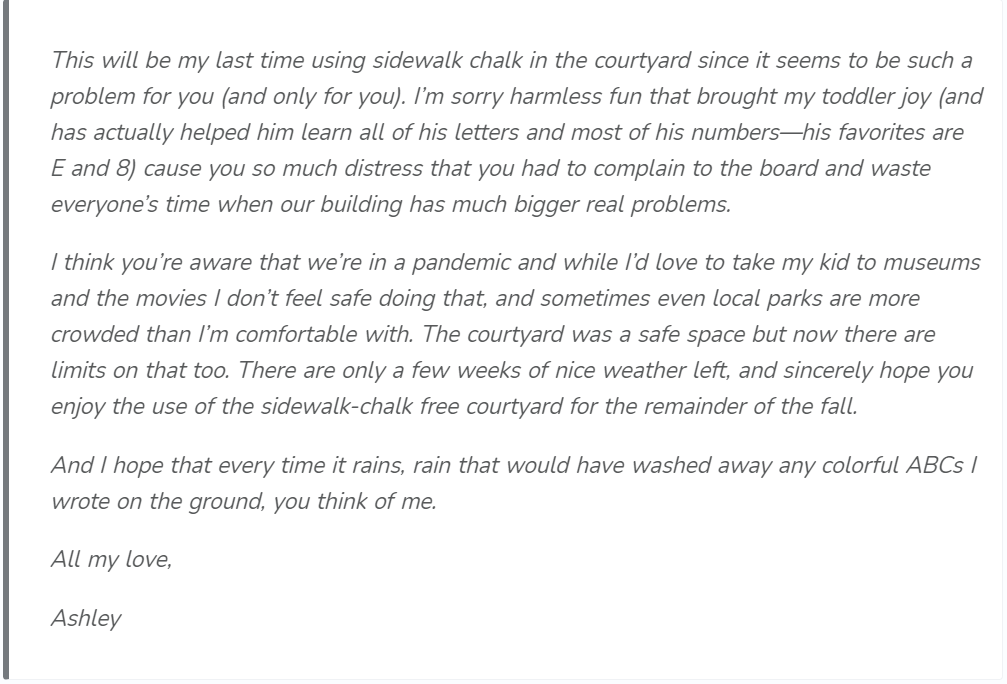 No doubt, the pandemic has turned the world upside down. Parents aren’t comfortable visiting cinemas, malls, or public places. So, they manage to have fun in their surroundings. For Ashley, the courtyard was a safe place. She loved chalking the walls with her daughter. She didn’t feel safe going out. But, it’s sad to see how the members put limits there.

How strangers treat others is a reflection of who they are. It shows their personalities and their values. How strenuous it is to find a stranger in this era who is kind to others. Instead of passing comments and involving the board, the co-op member should’ve considered other major problems of the society.

What a demoralizing situation it becomes. The message spreads on social media like wildfire. Many strangers tweet that chalking the wall doesn’t seem to be a big problem. Some say it’s quite a hateful action towards a toddler who was enjoying the day. Chalking is not a permanent problem, let the woman and her kid chalk the wall. Some comments were in favour of the woman and toddler.

Scroll down to see the comments!

These people should always be taught a lesson.

Well, you would always have people who won’t agree to you and this gentleman was one of them.

Woodfolk doesn’t blame the co-op’s board.

And one of the board members agrees!

Everyone needs to stay happy and others live happily as well. But nope, people just can’t mind their own business. What would you do in a similar situation? Would you act like Ashley or let the situation go away? Let us know in the comment section below. We always love to hear your opinions!