Be careful of who you are marrying.

Marriage is a huge commitment. You don’t just decide overnight whether it is possible to live the rest of your life with someone or not. You should take a lot of things into consideration before taking your relationship to the next level. Make sure your partner loves and respects you. However, love isn’t enough when it comes to marriage. It takes compromise as well. Once you start living with someone, you will find out a lot of things about them that you never could have guessed before. Silly habits, weird traditions, family jokes.

Even though this is not true in some cases, but a lot of people have habits and mentalities similar to their family. You should assess your significant other’s family as well as they were the people your partner grew up with. If things are going wrong before marriage with your in-laws, that is a huge red flag.

This woman shared her story on Reddit about how her mother-in-law ruined her dress and then gaslighted her. Read the whole story down below:

She asked the Reddit community if she was wrong for asking for a new dress.

She started off by saying her mother-in-law was very nosy, especially when it came to the bride’s dress. 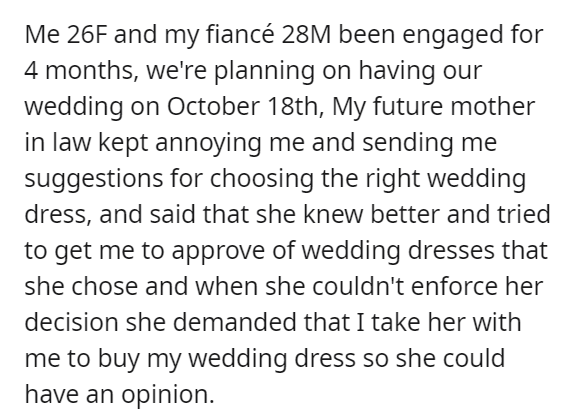 The woman got an expensive new dress and was very happy with it.

She made sure the dress was in a safe place so nothing could ruin it.

She returned home one day and found out that her dress was missing.

Her fiance had taken the dress to his mother’s house and returned it in a terrible condition.

It turned out, his mother and sister both tried on the dress and stretched it out, breaking the zipper as well.

Her mother-in-law refused to be held completely accountable.

The bride is very unhappy and is considering postponing the wedding now.

Her fiance and his family have absolutely no sense of boundaries. It really worries me how her mother-in-law thought she was entitled to wear her dress without her consent. The fact that they aren’t even owning up to their mistake is also very worrying. The woman really should reconsider becoming a part of this family.

They didn’t even bother asking for her permission.

They were straight-up disrespectful. 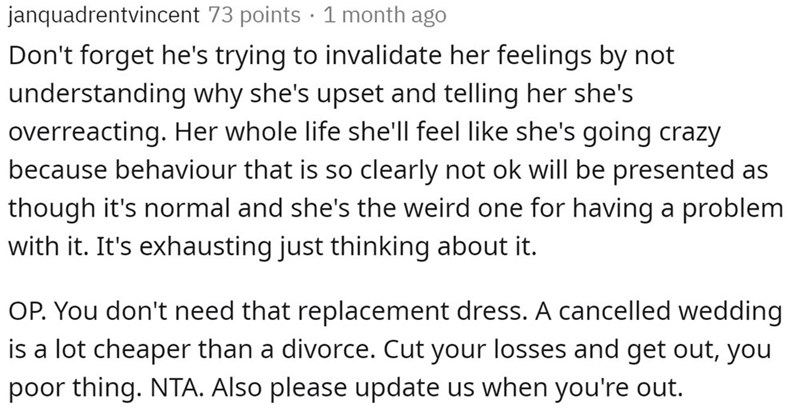 Everyone took the bride’s side.

I don’t see the fiance respecting her in the future.

The cruelty goes on.

It’s not just his mother’s fault, he is at fault too.

I hope she makes the right choice.

Who do you think is in the wrong here? What advice would you give to this bride? Share your thoughts in the comments down below!