Parents do a lot for their kids, even if they have very little to give. Being a parent is not like our regular 9 to 5 job. In fact, it is a full time responsibility. As parents we have to protect and nourish our children. And give them the life they deserve. However, some parents think that if they have done something for their children, it means that they have a right to control their life.Although it is completely wrong and unethical, but who can tell them. After all, they are our parents, and they deserve to be respected.

Since parents are no super humans, they’re just as prone to making mistakes as us. It’s okay, we usually forgive and forget, but sometimes it becomes hard for us to let go. Some mistakes are simply unforgivable, especially the ones that are linked with the special occasions in our lives. We came across a Reddit post in subreddit “Am I the a*shole”, where a mother of 3 posted about an offer she made to her daughter, regarding her wedding dress. She offered to pay 50 percent of the price of a wedding dress she though was perfect for her daughter. Her daughter liked a different and the mother refused to pay, as the offer was only valid for the dress she thought was nice. Scroll down to read the whole thing.

The OP has three kids and is short on money.

She offers to buy her daughter-in-law the veil of her choice. 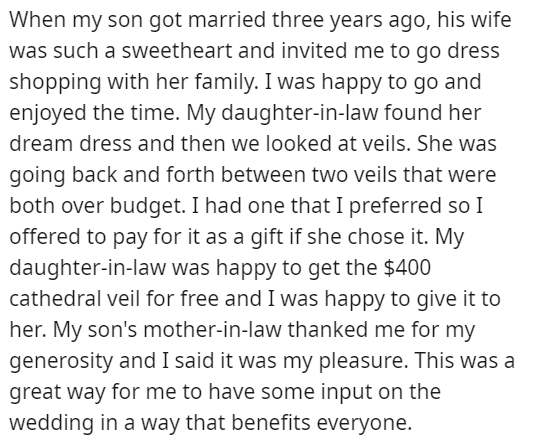 OP offered to pay 50% for the dress she liked for her daughter’s wedding. 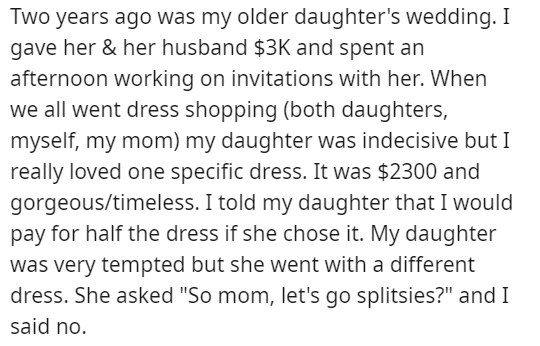 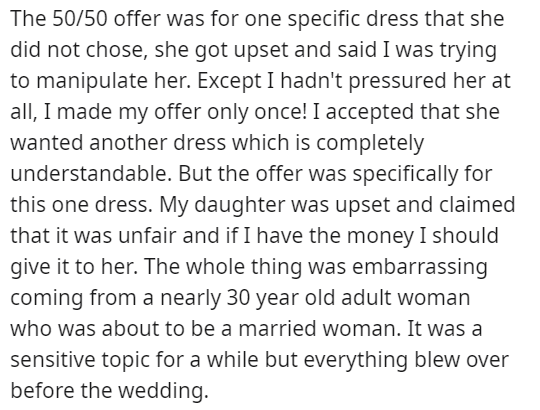 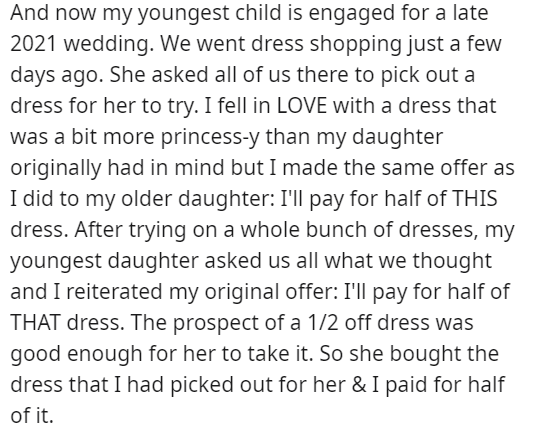 Well, the OP could have come up with a better option. If she is able to pay 50 percent for a SPECIFIC dress of her own choice, she could have payed that money for a dress of her daughter’s choice.After all, it was her wedding, and every girl dreams of wearing the perfect wedding dress of her choice.What OP did clearly makes her the a*shole in this story. She simply ruined her daughter’s big day by manipulation her into buying the dress she thought was a perfect bridal dress. The thing is, you can not impose your personal preferences and choices on others. Whether they are your children or anyone else. Everyone has their own unique personality, and that is what makes us all different from one another. You can’t accept everyone to go with your flow.

The OP should have been more supportive. 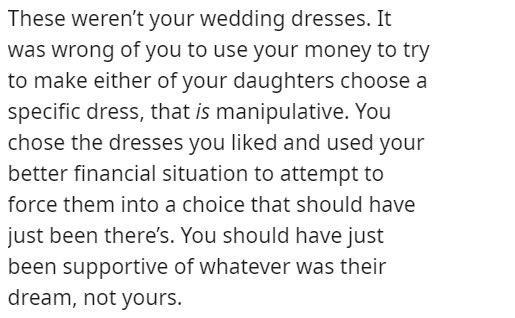 It was better to give your daughters the wedding that they wanted.

OP is controlling and manipulating with money. 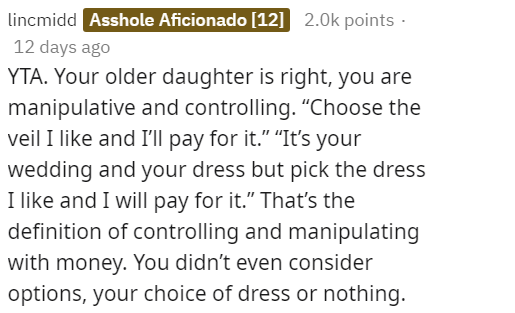 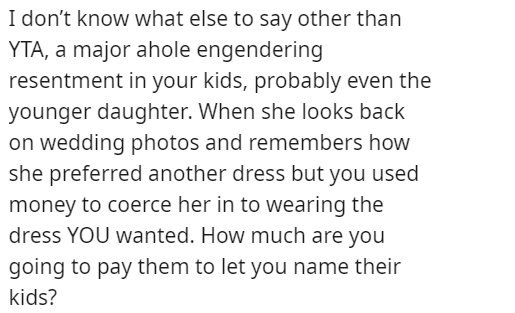 Willing to pay extra for influence.

No one should be imposing their own choices on others, especially on their special day. What OP did is simply an indication that she is a controlling mother. It was nice of her daughter-in-law and her youngest daughter to have accepted OP’s offer. Maybe they did that out of respect, or maybe they actually liked the item. God knows, anyways, OP shouldn’t have made such an offer. What do you guys think? Let us know in the comments below.