I have noticed that if some people have never done art relating things in life, they usually belittle the professions that come out of it. They think that it is all fun and games and is not a difficult job at all. That is completely false. Art takes a lot of effort, time, and money. You can not just create an artist out of thin air. If it were so easy to create art, why can’t you just do it yourself? Not everyone is gifted or skilled. Some people try to exploit artists by making them do unpaid work. They think “exposure” can pay for the hard work of an artist. That is all bullcrap. An artist’s career is just as real as a doctor, engineer, or accountant. Every profession is difficult in its own way. All of them require years of learning skills, paying tutor fees, and investing so much of their time. Usually, artists have to go to art school and learn different kinds of techniques to support their artwork. And let me tell you, art school is not cheap. Getting an art degree consumes many years of a person’s life. Later, when you see people belittling your work after you spent so many years working hard to get where you are, it kind of demotivates you. However, artists do not give up. They get back up after being pushed down and continue their art from where they left it. It is a wonderful profession.

However, not everyone understands that. People still degrade artists especially when they work for a company. If the boss is not from an art background, they have unrealistic expectations from the artists. It becomes almost impossible to fulfil their demands, but sadly, employees still have to do it if they want to make a living. This person worked as a muralist in a mural company. When their manager retired and a new one stepped up, things started to change for the team. The new boss did not understand how art works and gave the muralists a very tough time. However, it ended up backfiring one day when he asked them to paint while it was raining outside. Scroll down below to read the details of the story.

The muralist posted their story on Reddit, giving a little background to it. 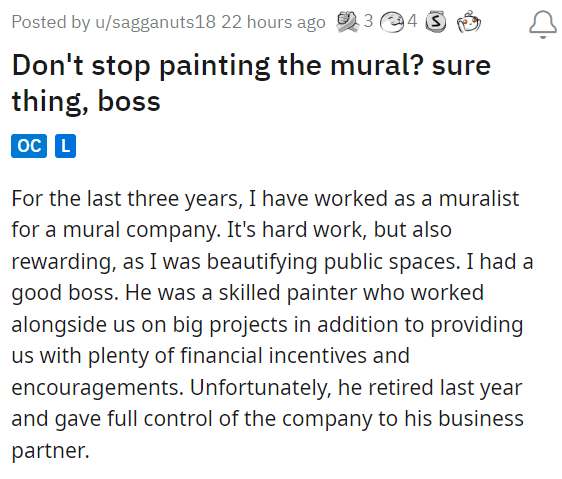 The new boss was completely inconsiderate and constantly berated the muralists. He would rush on completion dates and overlook clients, which would just pressurise the muralists. 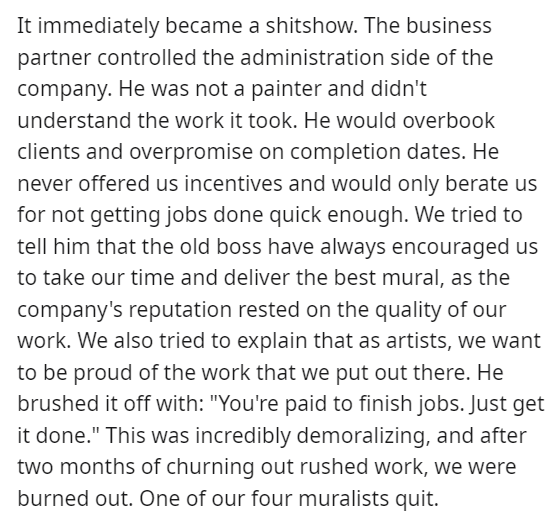 The beginning of the end started when the boss accepted a new project and signed a completion date of three weeks. The muralists clearly told him that it would take five weeks, considering the complex design and the weather conditions. The boss simply did not listen. 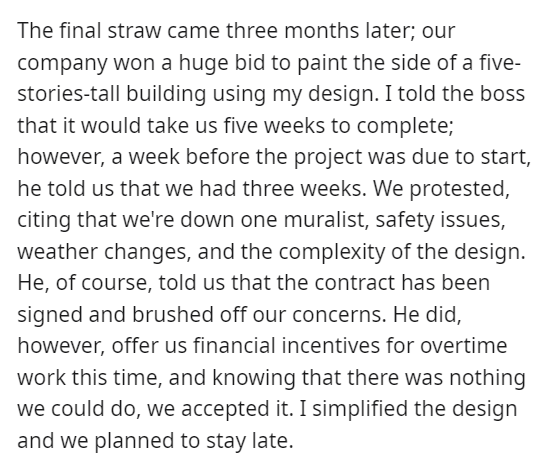 The weather was bad and work was slow as it kept raining. One day, the boss asked them to paint while it was drizzling outside. He would not take no for an answer. 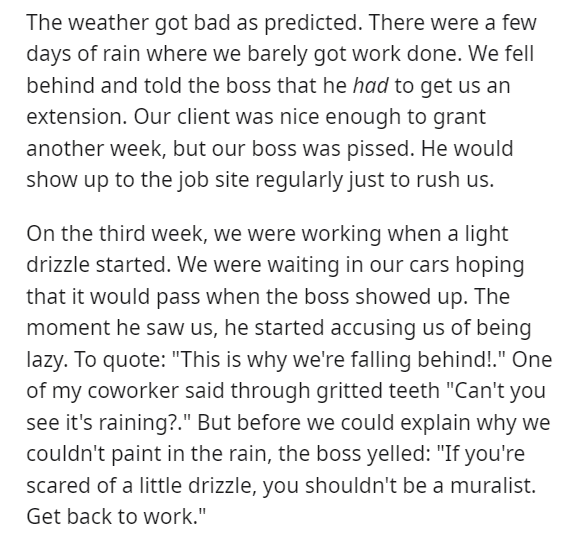 So, the muralists decided to maliciously comply. Of course, the entire mural was ruined as the wet paint dripped all across the mural. 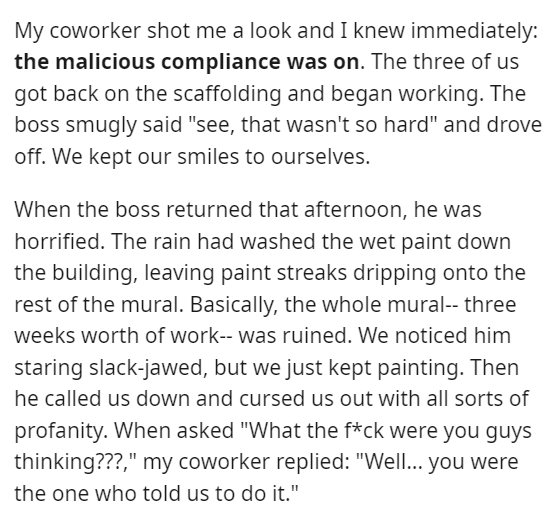 Finally, the entire team of muralists decided to quit. The boss later had to pay to repaint the side of the building. 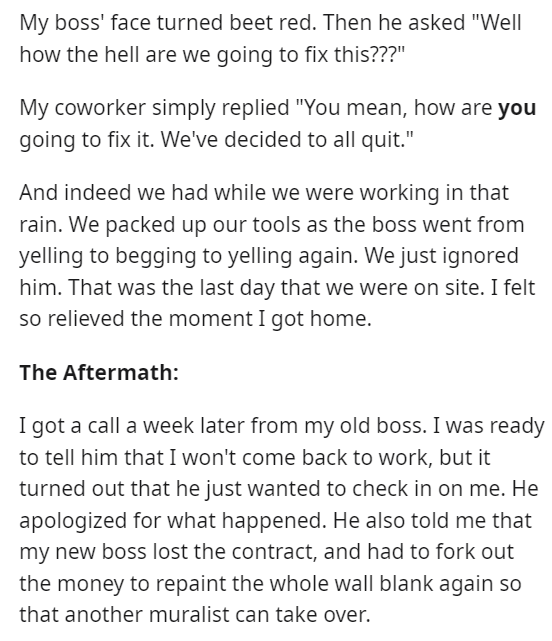 To be honest, this was bound to happen sooner or later. You can’t really run an art company without having any knowledge of art and refusing to listen to the actual artists. 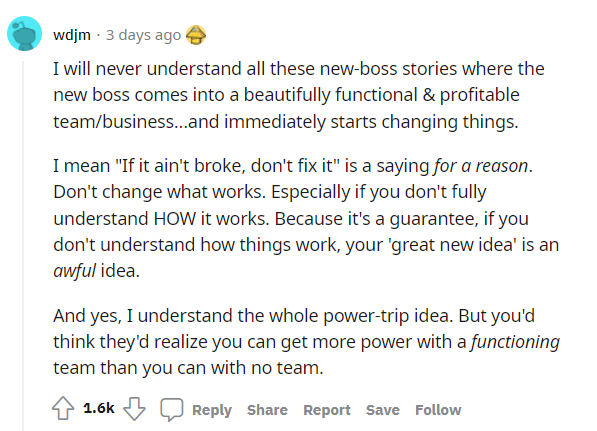 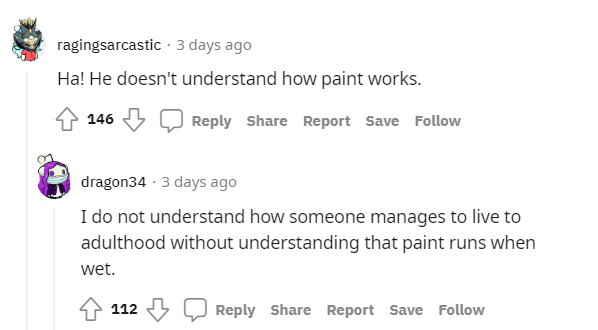 People explained that it took a lot of hard work in painting murals. 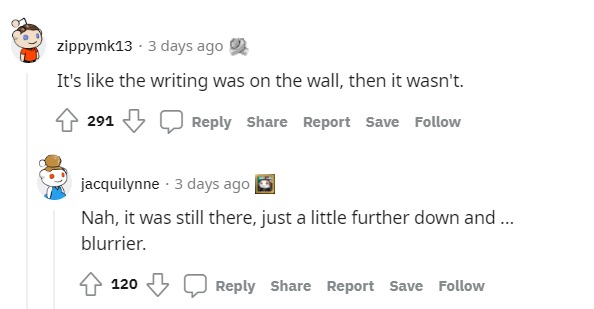 Do you think the muralists did the right thing? What would you have done in a situation like that? Let us know your thoughts in the comments below.