“How often do you workout?”

I am sure we have all heard this question at least once in our life. But, what’s different and interesting is the answer. Some people can just go on all day about how much they love exercising, and how they stick to their perfect routine of working out specific muscle groups every day. On the other hand, you’ll see people who will avoid eye contact when you ask the same question.

All in all, people have their reasons for working out. However, it is worth noting that primarily we’re all the same! The human nature is the same regardless of what our preferences and reasons are! And the human nature that we can all be unanimous about is that “it’s never enough.” No matter what we do, what level we reach, what things we achieve, we always end up wanting more.

And this is one thing that is very often seen in people who go to the gym. Let’s be honest; if you’ve just started going to the gym, it can be really hard sometimes. Especially when you see those good-looking guys and gals, it can really make anyone envious.

By the way, are you having a hard time processing all of this? Well, then allow us to show you some comics that accurately represents all the stuff that goes on in the mind of a person working out in the gym for the first time. The Following series ‘At the gym: who is looking at whom,’ is from “The Oatmeal Comics,” by Matthew Inman, who if you already don’t know is a brilliant artist and an illustrator.

Matthew Inman, is famous all over the world, with a fan-following of about 4 million on Facebook and 850k on Instagram to be extra precise. So the credit for the following accurate and hilarious comics goes to him.

So without further waiting just scroll on below and take a good look at these comics.

The most common insecurity: being fat. 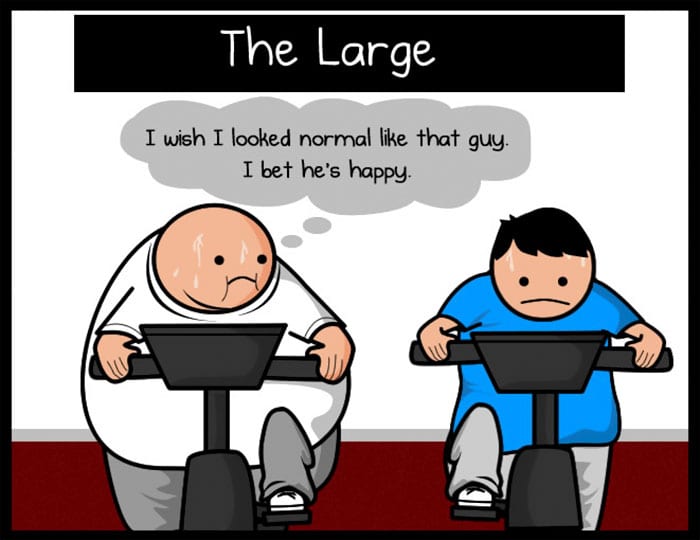 As you can see the chain has already started. Spoiler alert: It will just get better from now on! 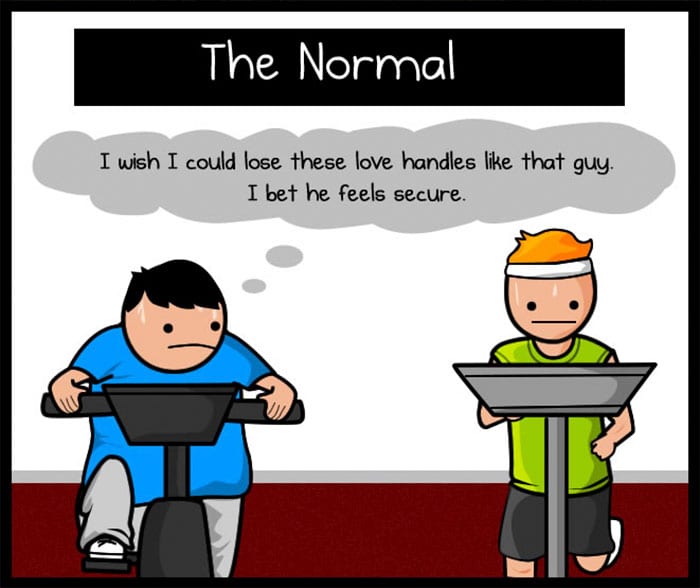 This is one is very real. I agree because I can relate to it with ease. Being the average guy isn’t easy. You have to work hard to maintain the “normal” look to ensure being on the safe side because all it takes is just a little bit of slacking off and carelessness and bam you’re out of the game! 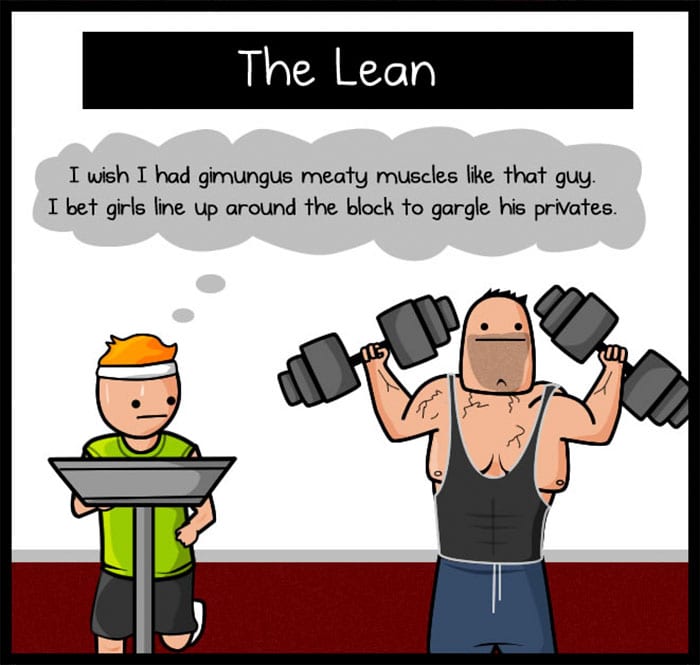 Ah, the ectomorph physique! This one comes with real pros and cons. But, it all depends on what you want, really. Ectomorphs have a genetically lean body type. For these people, it’s relatively easier to maintain than to gain.

Being envious of the witty ones. 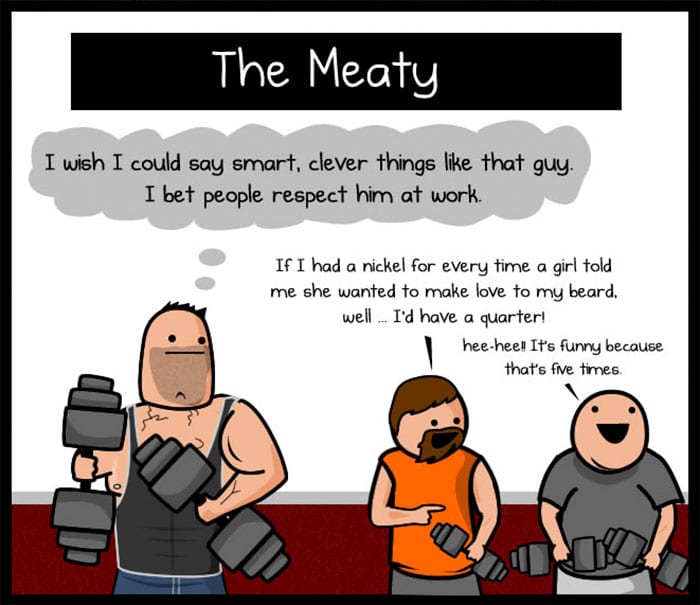 I mean yeah, what good is it if you can’t steal the spotlight. You’ll just be big and dumb, and the guys like that in the orange will prolly take it all. 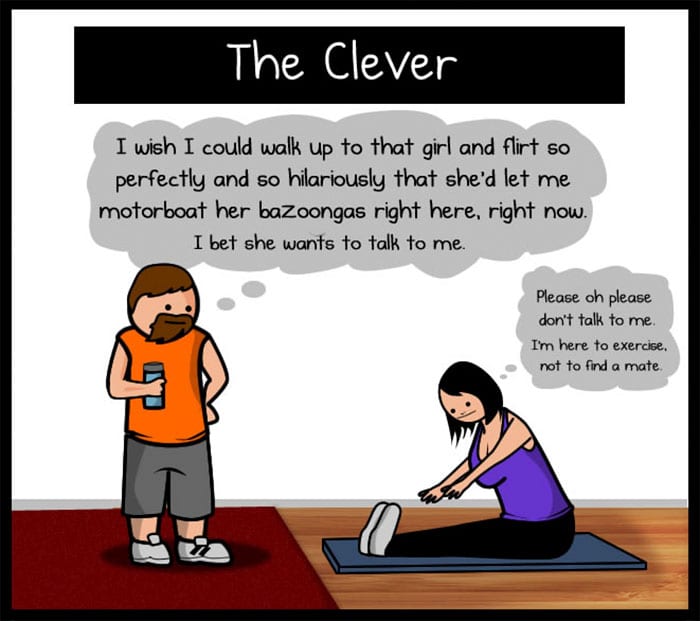 “Starved Baked Potato” This is legendary. 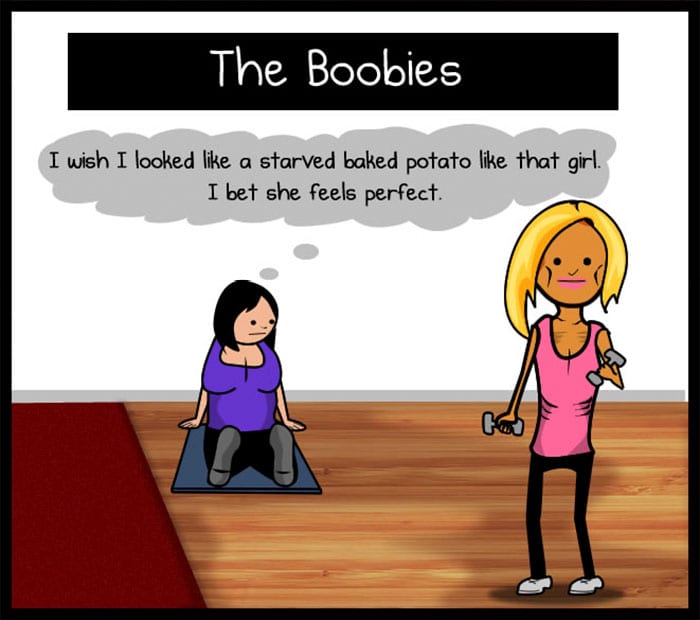 And I wish I could tell that girl that actually she is perfect in her own way too!

But anyway, this is what girls are actually thinking guys, take notes. 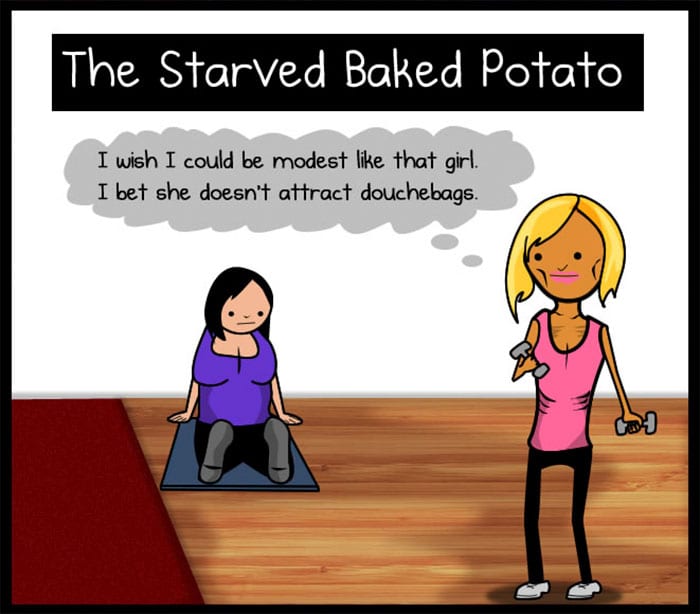 Woah. Didn’t see that coming! Who would have thought even she thinks that way? 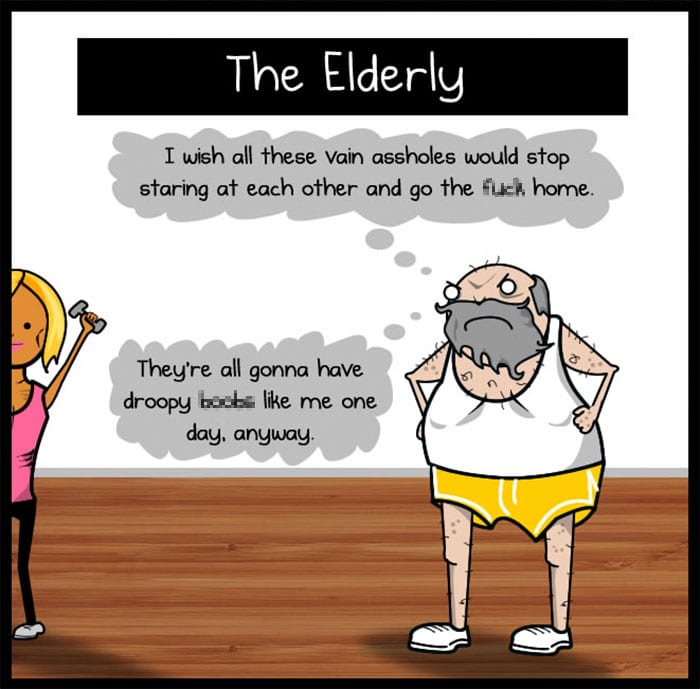 I honestly aspire to be as badass and real as this elderly guy! Someone who knows that none of it is important or matters,  because we’re all gonna be the same sooner or later(dead. Jk!).

Here is a compilation of some of the best responses to these comics.

They all have a point.

There are people who agree to disagree, and then there are those with a solid point of view. But, one thing is for sure, we are all chasing peace and happiness at the end of the day. Perception matters and what matter, even more, is paying attention to what you have in front of you rather than envying the lives of others.

I personally liked what that one guy said up there, “Progress is happiness.” There will always be people who are better than you. Besides, life is too short for bullsh*t anyway, so working for your own goals is the key.

What is your take on this whole situation? Comment below and let us know.