Toxic parents? A nightmare for every child!

Self-centered, emotionless nasty people, and the one who lacks boundaries, yes, we are talking about toxic parents, who are just difficult to deal with. If you have one, then you might agree with this statement. Well, this toxic level depends on each individual. Some of these parents are just so annoying that kids wish to live separately but due to many reasons they can’t, while some of them are quite bearable.

Likewise, these toxic parents are not only found in this real world, but Disney movies are also full of these kinds of parents. That’s right! After reading the word toxic and Disney, you might have recalled Cinderella’s stepmother – there’s no doubt, she’s one of the most toxic mothers in the Disney world! Anyway, not only does Cinderella have to cope with her stepmother, but many other Disney characters are also dealing with their nasty parents. So, have a look at these 10 toxic parents who can be found in Disney World!

Ariel, the main character in the Disney film The Little Mermaid, simply wishes to be able to walk on land like a normal person and travel to the surface of the planet. Her father, King Triton, on the other hand, was never appreciative of her dream and made fun of it all the time. He used to utterly ignore her, and we all know what happened as a result of his obliviousness in the end.

As opposed to dismissing and making light of Ariel’s dream, King Triton should have listened to his daughter’s wish and should have shown her appreciation by talking with her and discussing her fantasies. He should have also informed his daughter about the dangers and dangers related to walking and living on the land, as well.

Mothers are the ones who always spoil their kids because of extra love, and possessiveness. Likewise, in the movie Thumbelina, the mother took care of her son and even she chose a bride for him when he became an adult. This behavior of the mother leads to the low self-confidence of the son. As a result, he couldn’t even take care of his bride as well. In actual life, children who are raised with such intensely focused attention grow up and become adults, but they frequently fail to achieve independence. The quality of their personal life, their self-esteem, and the lives of their parents are all negatively affected later on.

But, what should the mother do? Instead of being possessive of her son, Toad’s mother should have stepped back and let her son fail. He should have gone out and searched for a future spouse on his own if he was intended to get married. But it was quite obvious that he was actually getting married because he was bored. Jessica Lahey, a teacher, has even written a book on the subject, titled The Gift of Failure, in which she argues that parents shouldn’t be scared to let their children make errors. People mostly learn from their failures and from their mistakes. This way can help people in finding new approaches to achieve their success and goals.

3. Cinderella could have a different storyline if her family appreciated her achievements.

Cinderella had one of the most obnoxious families in the whole of Disney World. The way her stepmother and stepsisters treated her was so insane. The stepmom was never satisfied with Cinderella’s achievements and always appreciates her own daughters. Her girls observe their mother’s treatment of their stepsisters, and it’s possible that this is one of the factors that contribute to their becoming narcissists.

If you’re a kid, you’re not going to be able to achieve something that will truly impress your parents since you lack the experience and expertise. Even simple tasks can be a huge leap and accomplishment for children. That is something we need to keep in mind. What’s the best course of action? Cinderella’s fairy tale would probably have a different ending if the stepmother had at least shown thanks and perhaps even praised Cinderella without degrading her personality. For instance, a happy family would have moved to the castle jointly. Even if we don’t have to excitedly clap our hands every time our children tie their own shoelaces in real life, it’s still important to pay attention and give praise to the child when they do it on their own.

4. Hansel and Gretel’s movie is all about how to lose your kids. 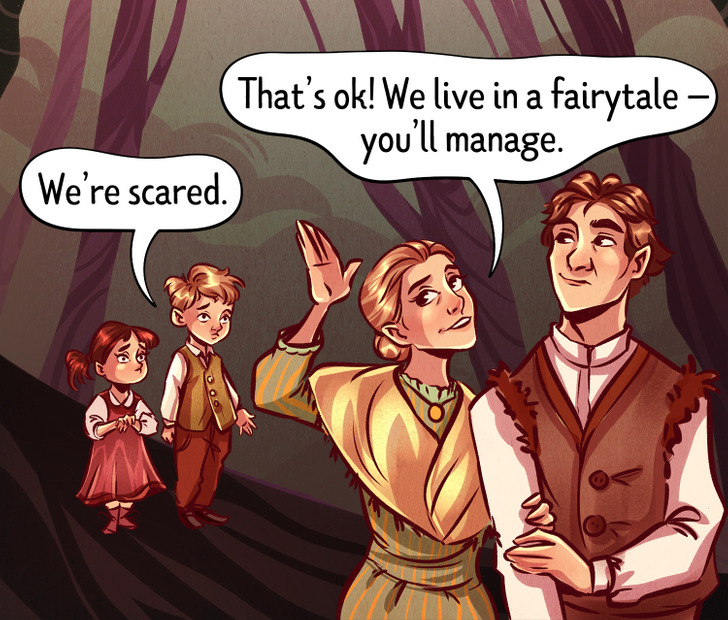 How to lose your child can be learned from observing the actions of Hansel and Gretel’s parents. Listening to children’s worries is one of the first things you should do if you want to save and maintain a healthy relationship with your children. If you don’t want your children to find themselves in a magical gingerbread house or a psychotherapist’s office working on childhood issues, then you should take your kid’s considerations into your account. Adults may find them absurd, but children’s minds are structured differently, therefore we have to deal with them in a different way to avoid childhood issues. But what could their parents do in actuality? They should avoid leaving their children alone in the woods, and don’t disregard their anxieties. It’s as easy as that.

5. King Thrushbeard’s storyline depicts the importance of child’s points of view and their personal limits. 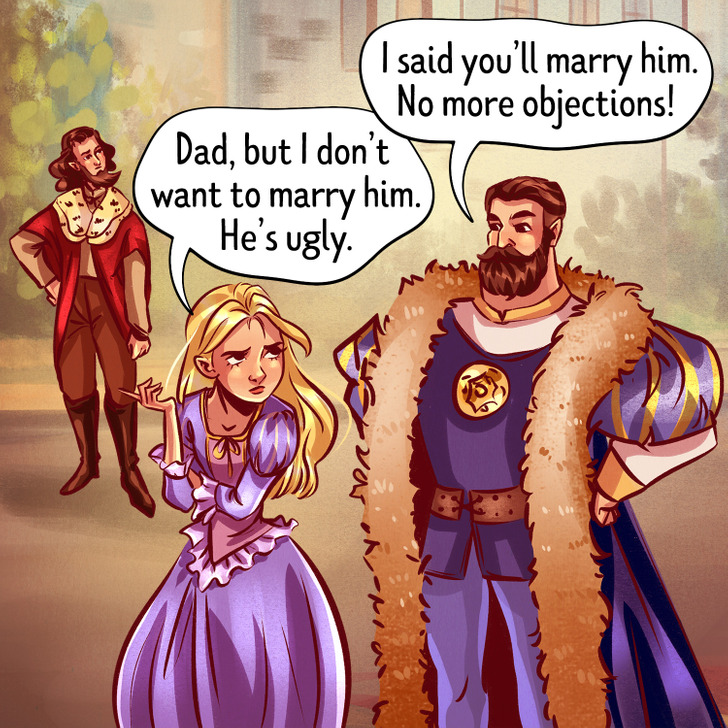 The personal limits of one’s daughters are often violated by fairy tale kings. There are times when a princess is married against her wishes, either for “educational” or “power-building” reasons. For the most part, a miracle saves the day in fairy tales. But we don’t live in a fairy tale, and ignoring the views of children can have major consequences. In adulthood, children can suffer greatly if they don’t learn how to define and protect their own boundaries and interests. What’s the best course of action? First and foremost, it is important to keep in mind that the daughter (who is ready to get married) has her own viewpoint, which should be taken into consideration by the king. It’s not just fairy tale princesses who should be treated this way, but in real-world, the parents should always ask and discuss their daughter’s point of view.

6. The Gingerbread Man addresses maturity and its guilts. 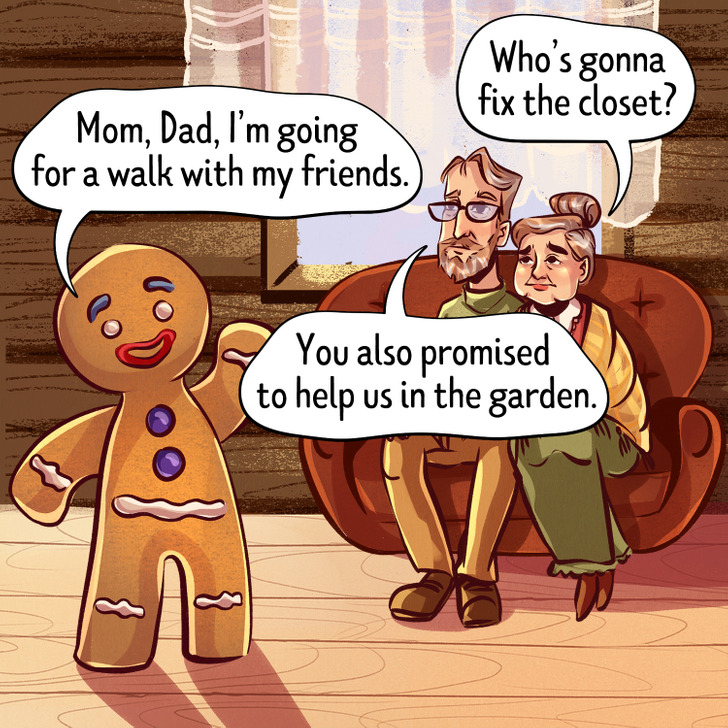 The Gingerbread Man is all about growing up, as said by some researchers. There are some points that don’t make sense in this movie. For example, the Gingerbread man was made by his parents, and he left his parents just to go out and explore the big things in this world. His parents didn’t feel good about his actions and asked him to return home. Maybe because the parents want to keep him safe from dangerous and hazardous things. It’s true that parents don’t run after their kids, but they can try to make them feel bad by asking them to do chores around the house. However, in this case, it looks more like a relationship between an adult and a mature person than one between two mature people. Most of the time, this kind of behavior turns the child off and makes them quieter.

Anyways, instead of hiding things from the Gingerbread man, from the start the parents should have more openly talked to the Gingerbread Man. They should have told him how important he is to them and that they, his parents, are getting old and need help. Many of us don’t have real-life talks like this.

7. Pinocchio’s lesson: never ever blame wrongdoings on someone else. 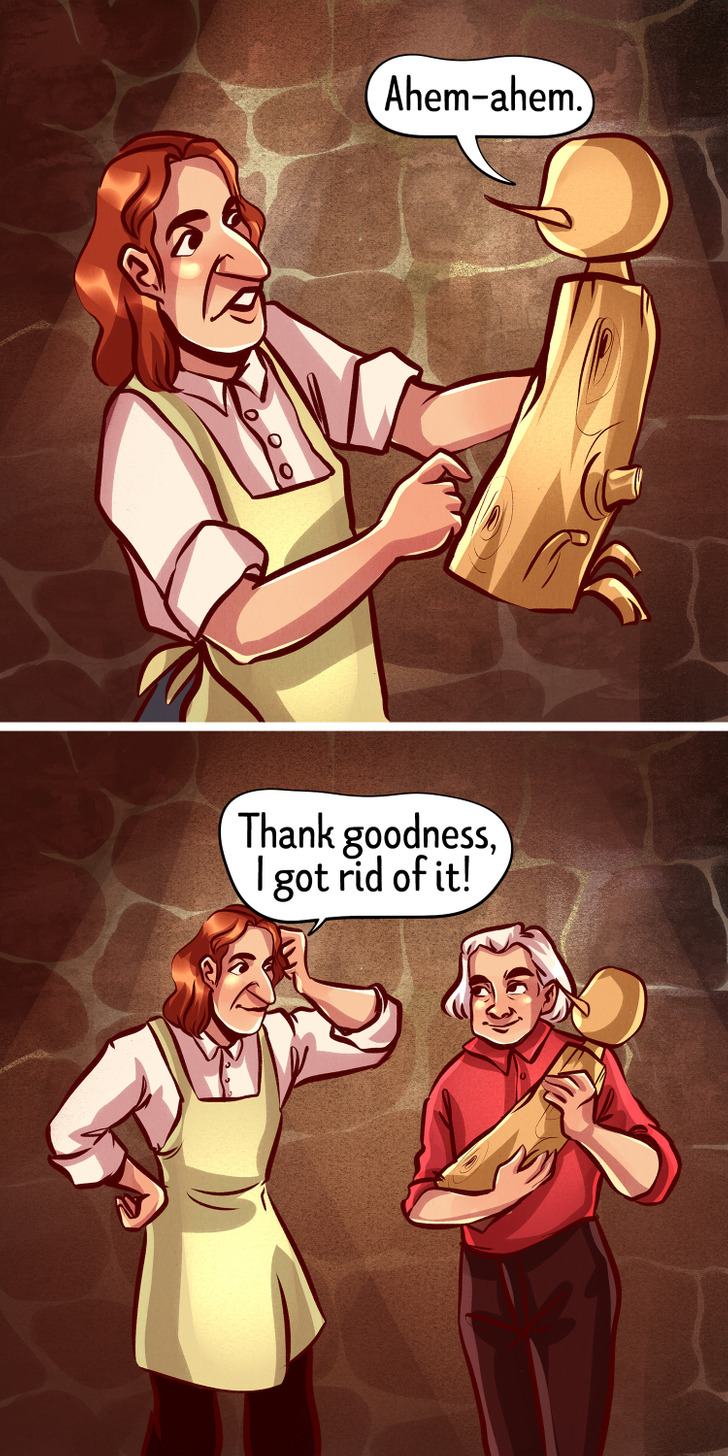 In Pinnochio’s movie, when an old carpenter was working on a log, he found out that the log can talk. He was afraid, so he gave the piece of wood to his friend and asked him to get rid of this weird thing. His friend made a live doll out of the log later. There is so much weight and fear in real life that it’s easier to either give up or blame someone else for everything that goes wrong. For example, if the child doesn’t learn well at school or from teachers, then they are blamed for not learning well. What should be done then? Being a perfect parent, or raising a kid perfectly without any flaw is quite difficult or nearly impossible. If by chance, there’s anything that didn’t go right, or there’s something wrong then one shouldn’t get freaked out or panic. Instead, one should know how to stay calm and think properly without causing more damage or problems.

8. There is a parenting lesson in the movie “The Little Red Riding Hood.” 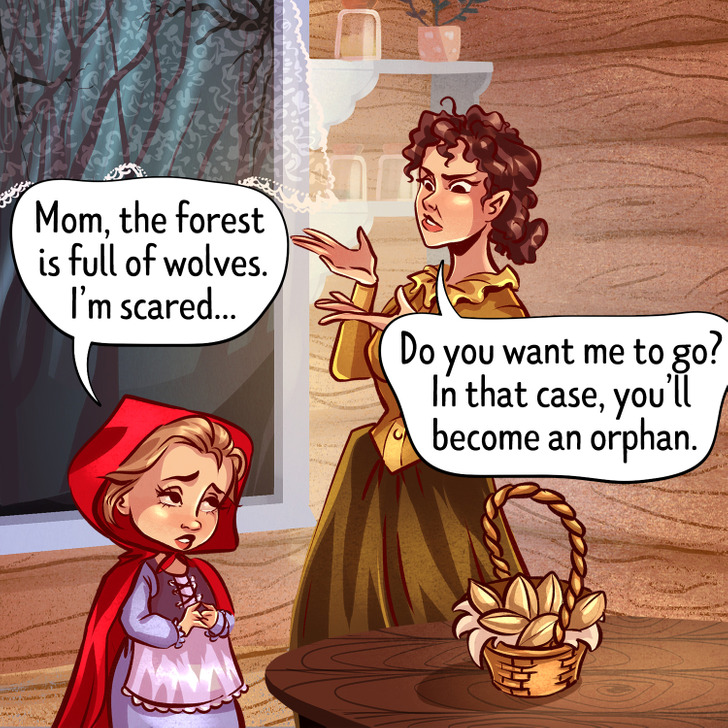 Being an adult, whenever we will watch the movie The little red riding hood, we will see many surprises in this movie. While watching the film, many questions arise such as how could she let her daughter go alone into the forest? Wasn’t she afraid about her? Possibly she didn’t want to go see the grandmother herself. In real life, some parents can also put things on their kids that aren’t their age. They grow up too quickly when they aren’t ready. This method can lead to dangerous situations that a child can’t handle yet, but it can also cause psychological problems. It’s a good idea to split up the housework. Isn’t it bad if you send your daughter to a place far away, alone? She could’ve also gone to see her grandmother and spend some time together with her daughter. In real life, some parents should also think about how many tasks they give their kids, who aren’t yet adults.

9. The movie The Swineherd is all about parents and their egoistic behavior. 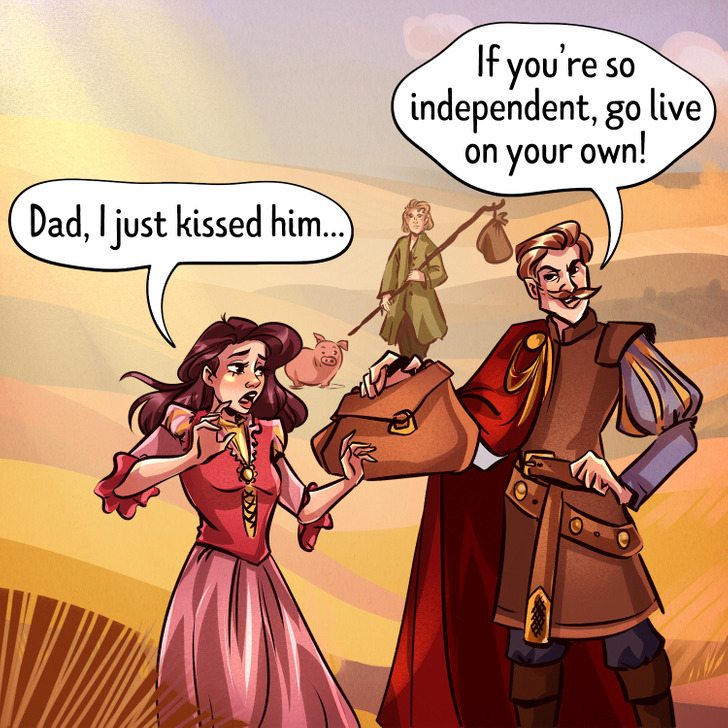 There’s another thought we have: A king/father who always knows what’s best for his child. The princess got a little sidetracked and kissed the swineherd, who by the way wasn’t behaving in an honest or noble way. The king got angry and threw his daughter out of the house, so she didn’t stay there long. People who are strong and tough act like tyrants in real life, especially if they have a small child who is completely dependent on them. In reality, parents should always listen to their children and let them know what’s wrong or right for them in a polite and friendly way.

10. For parents who don’t pay attention to their kids’ problems, Karlsson-on-the-Roof has a great lesson. 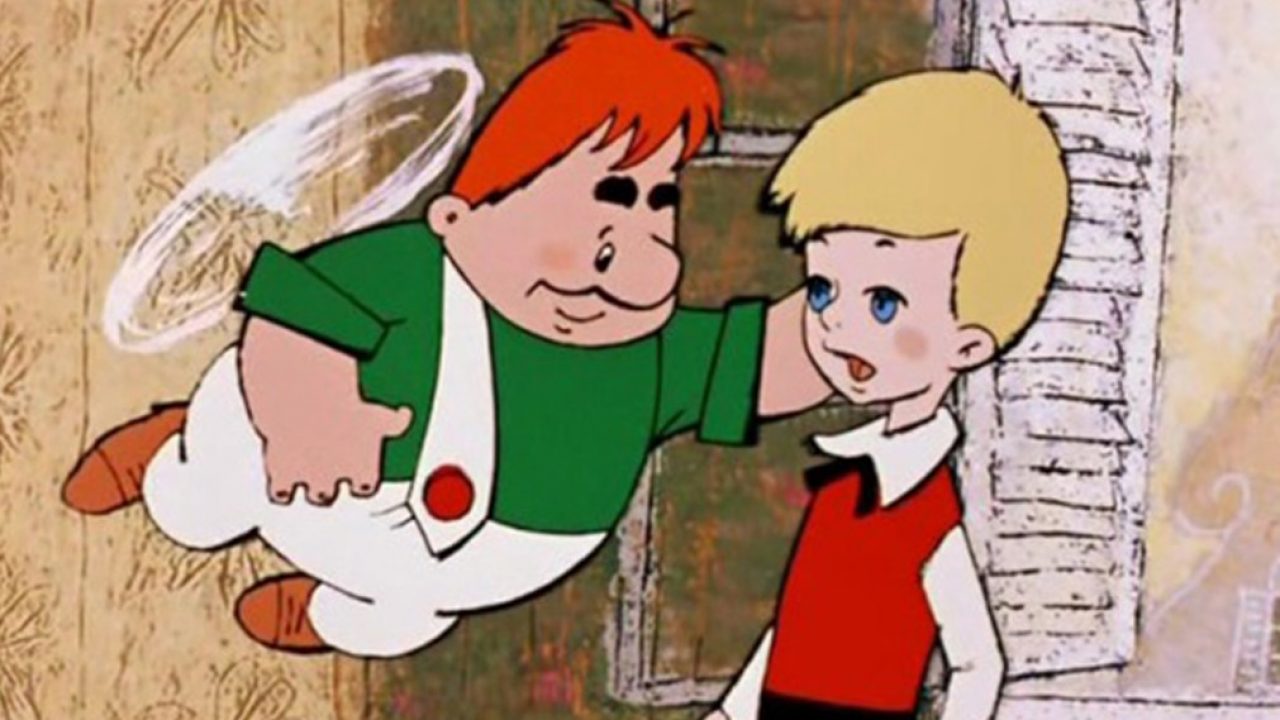 Whenever you try to control your kid or are overprotective, this kind of activity is always dangerous for them that can lead them to traumatic or physiological issues. Like in the movie Karlsson on the roof, where the boy climbed on the roof and scared his parents to death. After all, he was telling them about his new friend, but the parents didn’t pay attention.

Well, this is not the only case in the Disney world, but in the real world, you will find many similar stories. Where the parents don’t pay attention to their kid’s problems when they are trying to explain the problem. Instead, the parents are always busy with something else and ignore them. If you don’t help your child get out of trouble one day, you might lead them towards another problem. So, you must take a stand against the toxicity of parents and above that, if you are one of these parents, change yourself for good!

Anyway, in the end, we’d like to know whether you have experienced any toxicity from your parent’s end? Or Do you know any similar stories related to toxic parents? If yes, then don’t forget to share it with us in the comments section below!