What is so hard about accepting your child’s significant other?

I mean this isn’t the only story where the in-laws supposedly hate their child’s significant other. And they will do anything in their power from making rude remarks to being outright racist just to get under their skin. And this isn’t just a frivolous relationship either, they are married and planning to have a baby themselves.

I never could understand why parents like to get into someone’s relationship. After all, it’s their child’s life, not theirs so why do they have to ruin someone’s life? I am well aware racism is a bit more deep-rooted than a simple remark. And it is clear that this guy’s parents have been this way for a long time.

Right from the start, I am starting to hate these people.

Some Americans sure do think learning an entirely new language is easy. 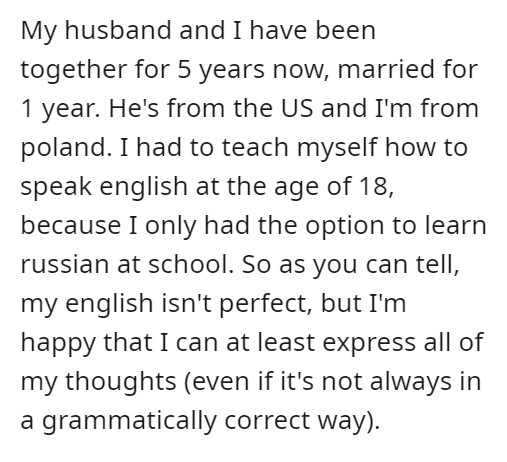 It takes years to learn the correct grammatical way. And even then you might not be confident enough to speak it in case someone makes fun of your accent. At least she is trying and she deserves props for that!

There is no excuse for being a racist, no matter what anyone says. 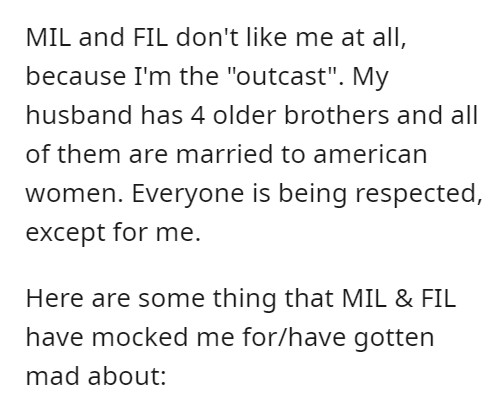 And what is so wrong about that? She just has a unique accent. 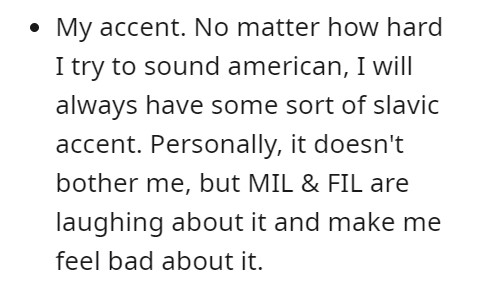 That doesn’t even sound like a weird tradition to me. 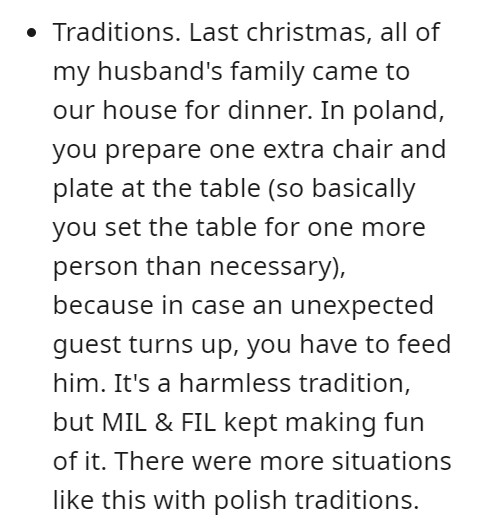 You make your husband a better man. It also shows a lot for his character to be raised like that and he doesn’t have the same beliefs. You are not making him choose between you and them, he prefers not to be around their toxic behavior. MIL also stands for the monster in law.

And your tradition of setting an empty setting is the best tradition I have ever heard of and it made my eyes water. To hear someone make fun of kindness makes me want to take their own plate and throw it in the trash and tell them to leave. I would be honored to have a friend like you.

Isn’t it normal though? I mean polish people aren’t the only ones who do this. 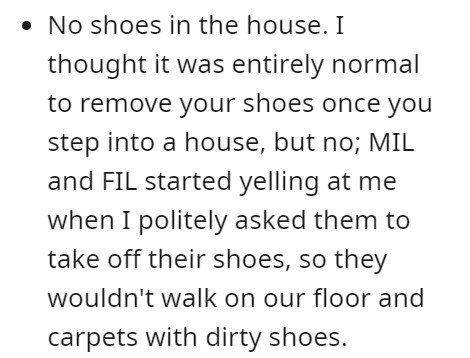 This is just straight-up wrong. 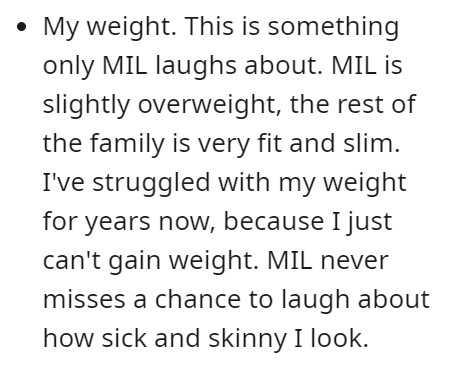 Why would they be angry about being grandparents? This is plain weird. 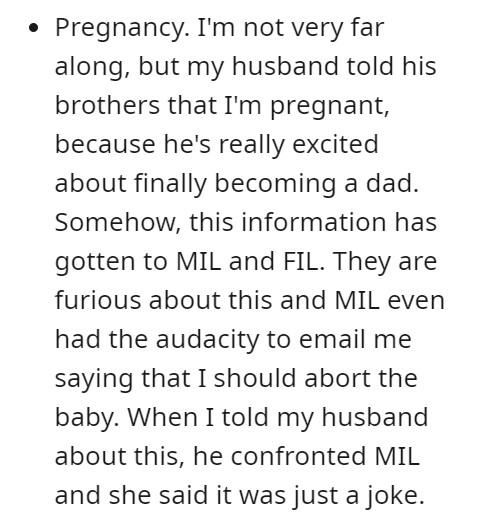 So they are one of those people? Now I understand. 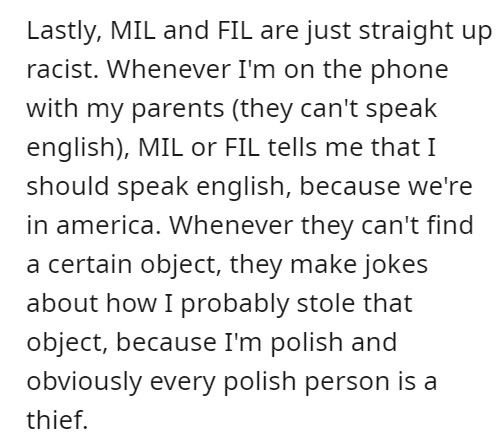 That is nice but he needs to do more. Nobody deserves to be treated this way. 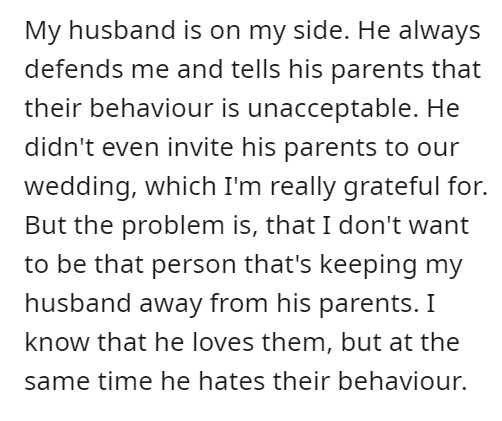 She is clearly not the reason for their strained relationship. 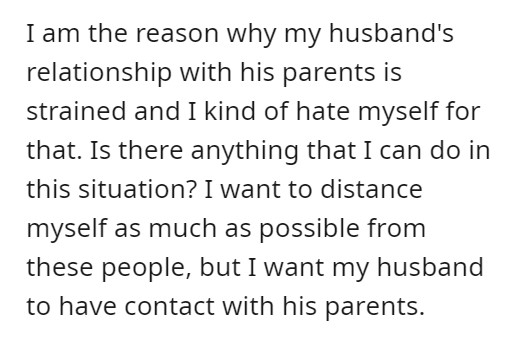 And they are a team so they need to stick together. 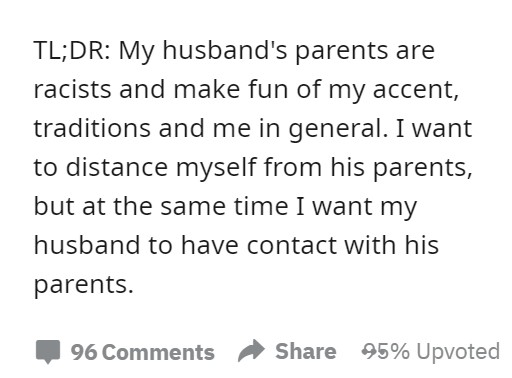 Exactly! And it isn’t a joke to say something like that. 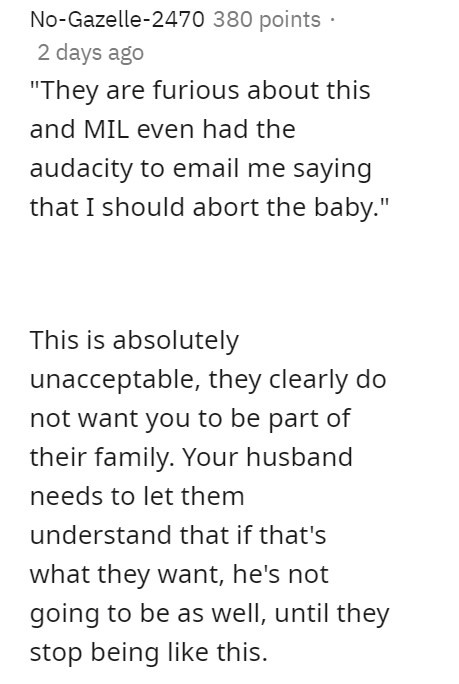 But it was a joke!

Anytime anyone tells me they’re pregnant, I jokingly tell them to abort, and then we laugh for hours! –Hecate_333

It really is as simple as that. He needs to put his foot down. 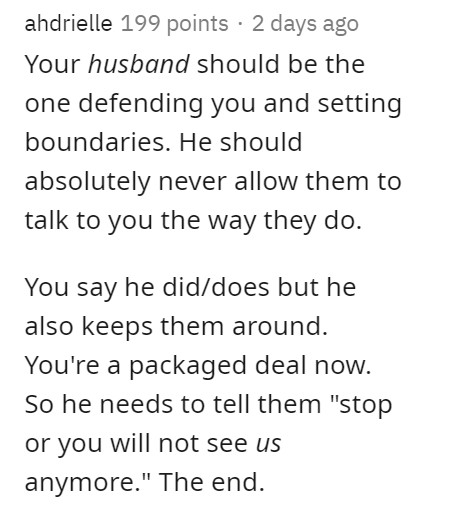 Didn’t he know his parents were racist before they got married? 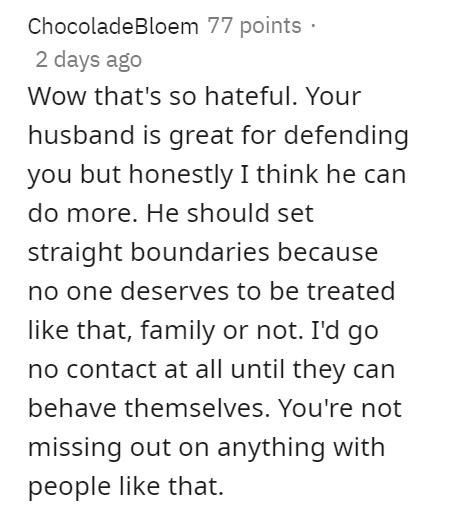 What would you do in this situation? Let us know in the comments below and don’t forget to share with others.