Photoshop is not inherently bad.

I mean I know it gets a bad rep because so many people nowadays edit their pictures into oblivion until they are no longer recognizable as humans and look like a doll. However, I am not saying editing a picture to hide your apparent flaws or making yourself look the way you want is bad as long as you are not trying to deceive people.

I am well aware people have different opinions on altering your actual body and skin, but I personally don’t like it. Don’t get me wrong, I myself love to add filters, remove the pimple that popped on my forehead that day but making yourself look completely different is an entirely other matter. So if you want to do that, go ahead but it should never be done without that individual’s permission.

And yet that is exactly what this photographer did. Rather than just touching up the photos to make everything better, he decided to alter the bride herself when she never asked him to do so. As you can imagine, she was not happy with this turn of events.

Nobody asked him so why do it? 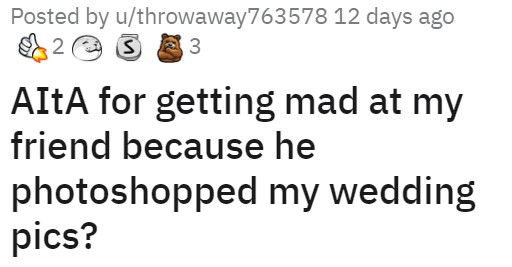 He seems like a great friend at first to offer his services for free. 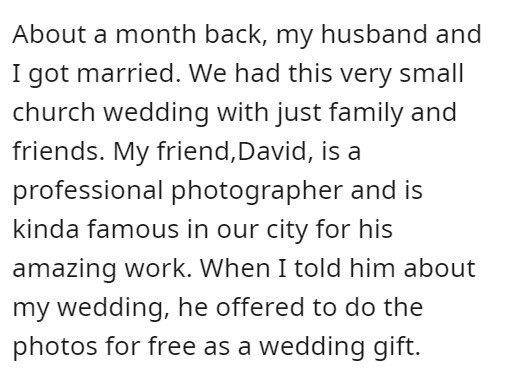 I know many brides want that but she didn’t and she never asked him to edit her body. 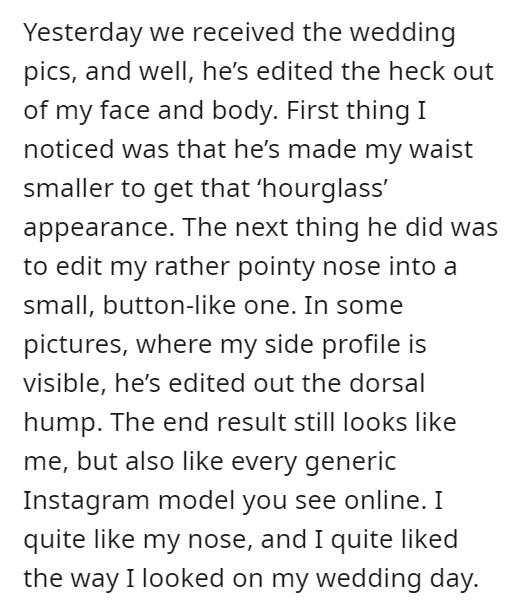 Wait, A professional would never delete the original pictures. Something is definitely wrong here. 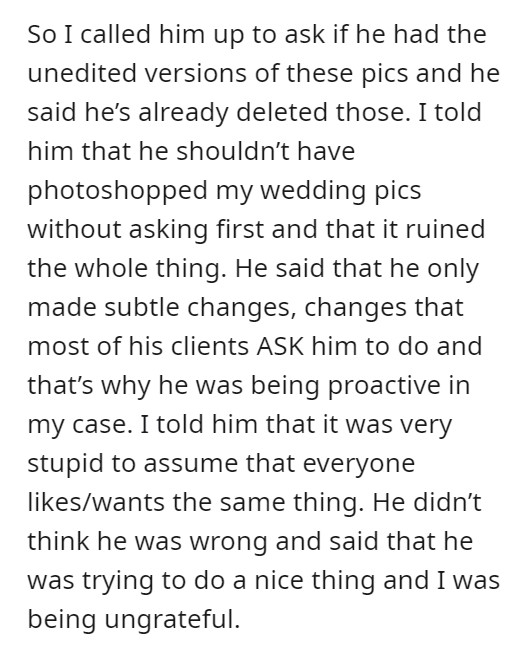 Your common friend is not that great of a friend then if she thinks it is fine to insult you. 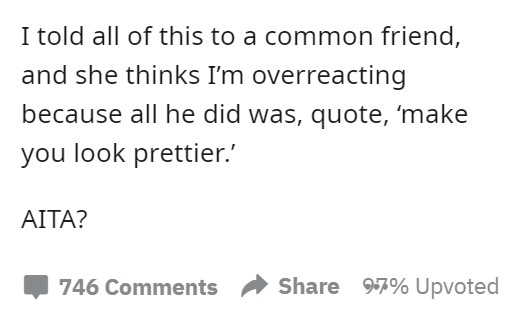 Pissed at him AND the second friend. Made you “look prettier”? Screw that nonsense. I’m willing to bet the vast majority of guests at your wedding thought you looked gorgeous. I’m guessing a few if any, thought “Wow, how lovely! …Now if only her nose were smaller, and her waist…” and those that did know to keep that shit to themselves.

Who wouldn’t be angry? I know I would be. 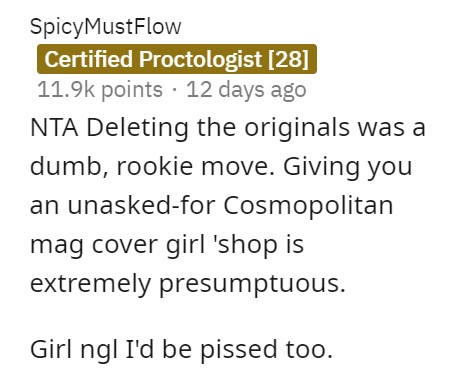 This would have never happened if he had just asked beforehand. 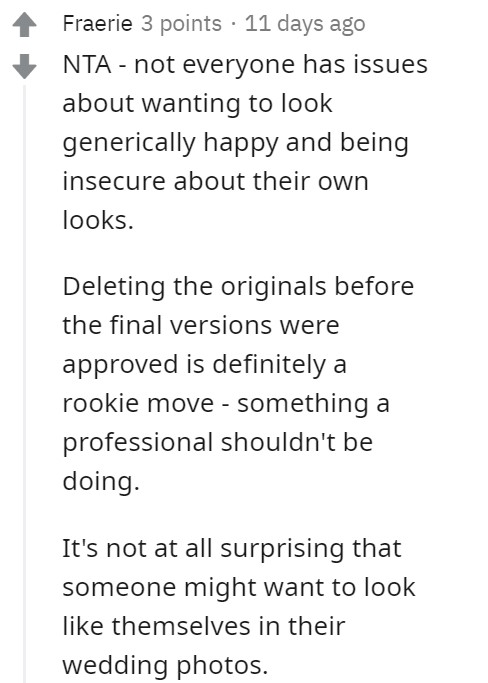 I don’t think he deleted them, he is just being an a**hole. 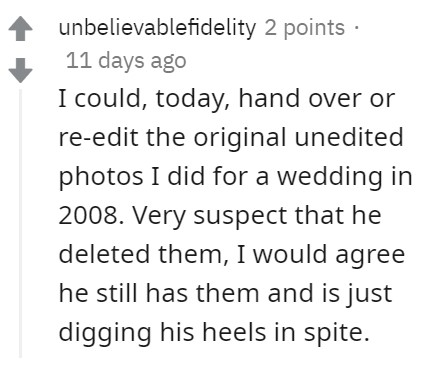 He just doesn’t want to admit that what he did was completely wrong and presumptuous of him. 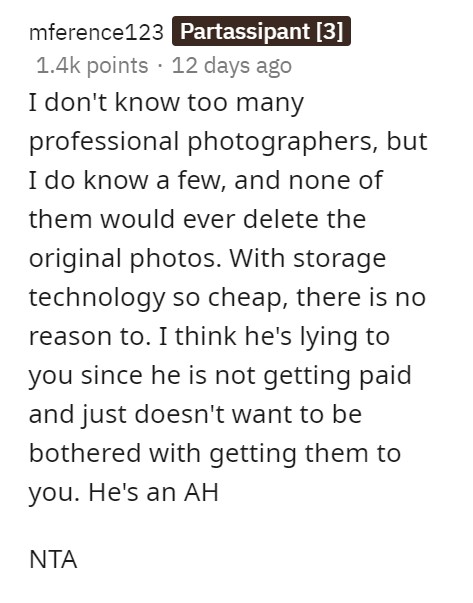 By the looks of it, I don’t think he is going to do anything. 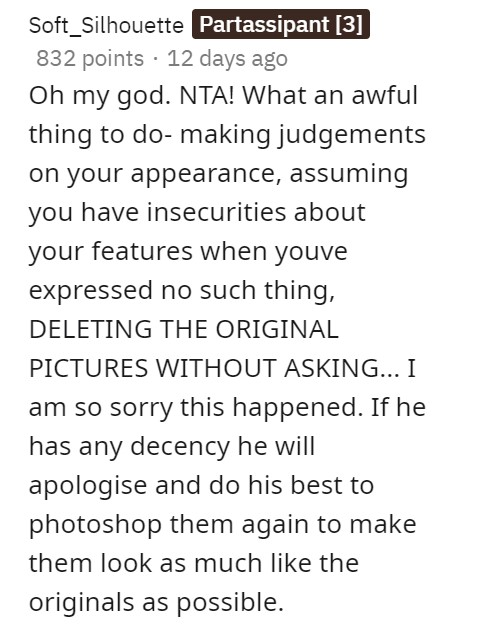 Not everyone wants to look like a generic Barbie doll. 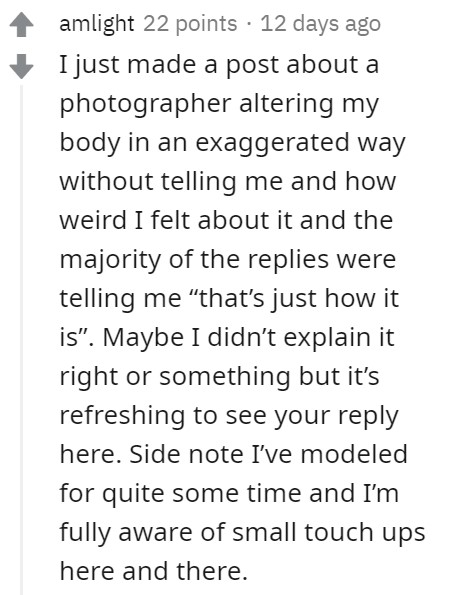 And apparently, you are stuck with the altered pictures now as well. 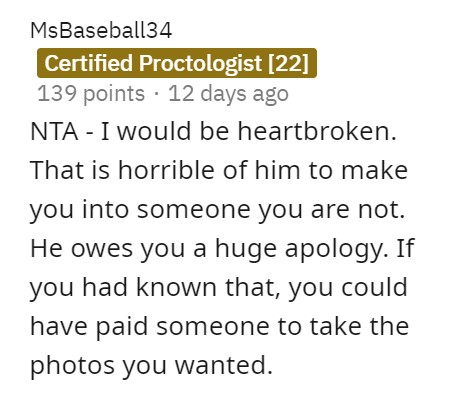 NTA. He needs to call up an IT guy who can hopefully “undelete” those pics. You didn’t ask for it and he should give you the unedited versions. And he should do it for free. And tell him that it’s noted that he thinks you’re unsightly. –Maleficent_Ad_3958

What would you do in this situation? Ask him to fix the pictures or just let it go? Comment down below and let us know. Don’t forget to share so others can comment their own opinions as well.