Raising kids is not an easy task. Parents have to go through countless sleepless nights and tiresome days to discipline their little ones. It is important to teach kids how to behave at a very young age. Otherwise, when they grow a bit older, it becomes difficult to discipline them. Parents who rely on others to take care of their children end up making a huge parenting mistake. As it’s their job to take care of their them and not anybody else’s. No one in the world can control and discipline children the way their parents can.

Parents should start taking responsibility of their children instead of running away from them. Because With time, bad habits become stronger and harder to break. Once children becomes rebellious and ill-mannered, it is difficult to make them behave.Today’s kids are tomorrow’s parents, and they would have to raise a whole new generation. If they have not been raised well, than what would be the future of our world? Just think about it. In the Subreddit “Am I the a*shole” someone posted about training kids like dogs, and it caught our eyes. We couldn’t resist sharing it with you guys. A woman who accidentally became a babysitter for her cousin’s twins, disciplined or should we say trained them just like we train our dogs. Scroll down to read how she did that.

OP’s cousin randomly drops off her boys at her relatives place. 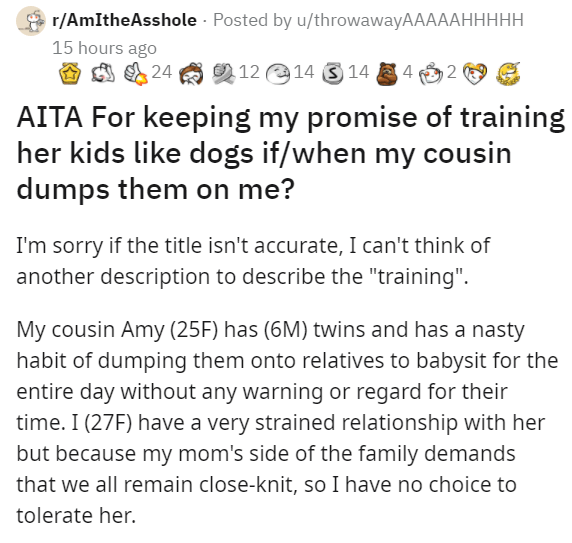 OP said she would not babysit but rather train her cousin’s children. 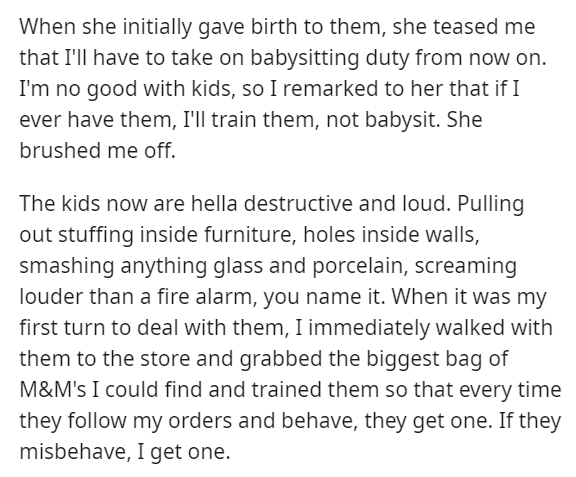 OP treated them the same every time Amy dropped off her kids at OP’s. 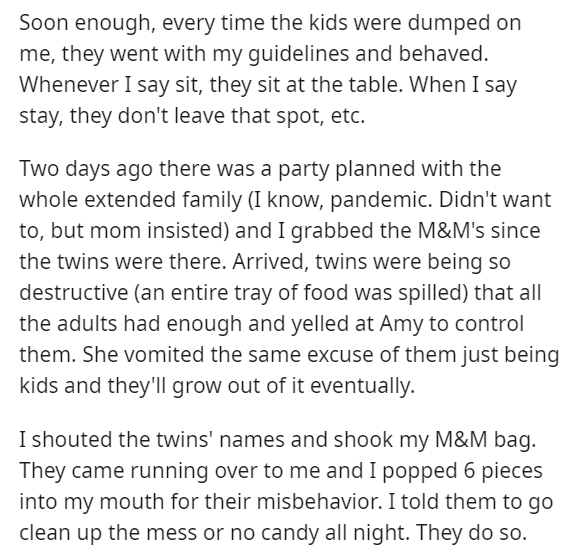 Amy had an argument with OP. 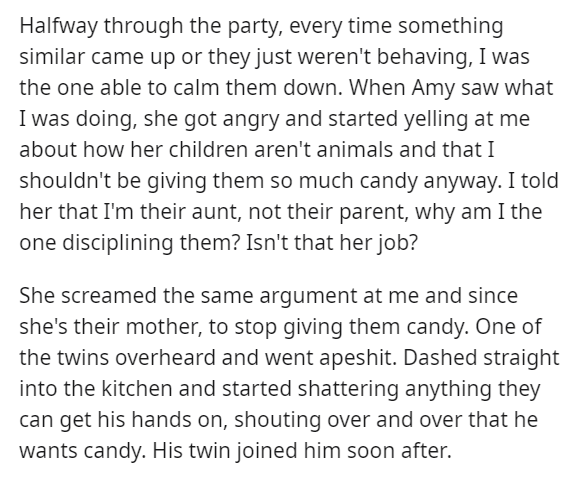 OP’s friend said that this is not the right way to discipline kids. 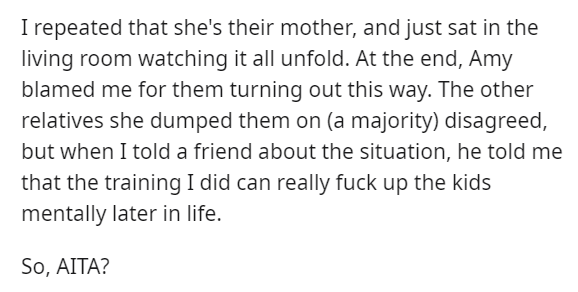 Kids should not be trained the way we train our dogs. The best approach to teach kids discipline is by teaching them the consequences. It’s human nature that after a certain age, kids would start to rebel against the conditions you bound them to. Ultimately, they would end up much more rebellious than ever before. We agree with OP’s friend, that this sort of training can actually be a disaster for the children’s mental health. It should be avoided. However, it was hysterical, and OP was not the a*shole for trying to discipline her cousin’s kids. It is Amy’s responsibility to teach her kids some manners and control their annoying behavior instead of leaving them with her relatives.No one in the world can raise their kids the way parents can. In this whole scenario, if anyone is the a*shole, it’s Amy. She’s the mother, and it’s her responsibility to teach her children some manners. She just can’t blame anyone for treating her kids a certain way, as she’s the one who allowed this behavior in the first place. Talking about a Reddit post and not including the comments from the Redditors is unfair. So scroll down and check out what they thought about it.

They have a system of discipline.

They are able to control themselves. 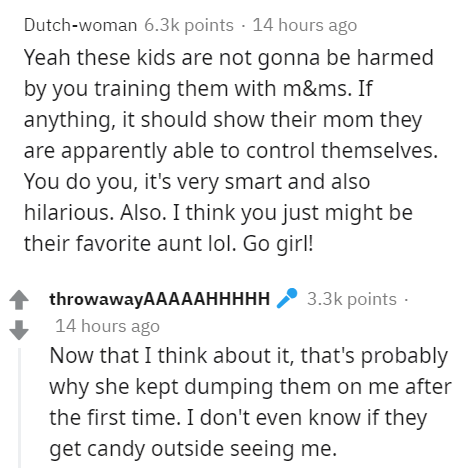 She should have come up with a better plan. 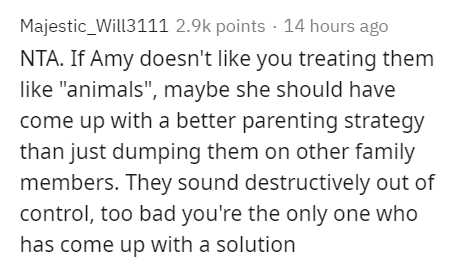 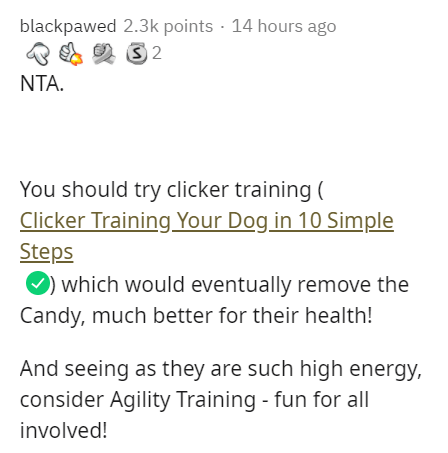 She should discipline her kids. 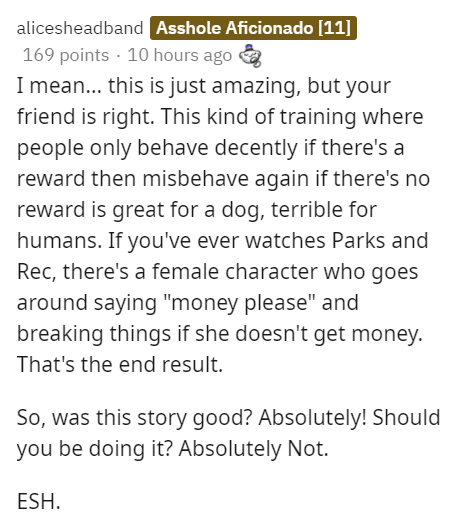 Better than your cousin’s idea of parenting. 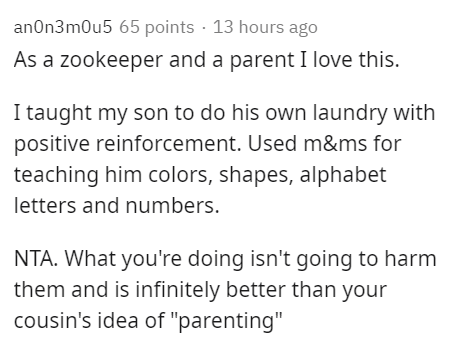 Parenting is a full time job, and people with kids need to understand this. Otherwise, there would be more stupid people in the world. There’s already so much going on in this world that at this point we simply can’t afford to ruin it any further. What do you guys think? Let us know in the comments below.