Nobody ever said parenting was going to be easy.

Throughout most of the world, it is expected of everyone to have kids when they get married or come of age. As humans, our basic instinct is to repopulate even if our Earth might be suffering from overpopulation. However, parenting is definitely not for everyone, and sometimes even when you try your best for your kids, you still fail spectacularly. Now, these parents clearly care for their children and they just wanted to do the best for their kids but it apparently did not work out for any of them.

From getting the wrong name written on the cake to bring treats to a school event that look like a specific genital, there are many things that these parents have done by mistake. Although, we can’t really blame them as everyone makes mistakes and parents aren’t an exception to it no matter how much the kids may think their parents are perfect. So today we have some great examples of these files that are just hilarious. It is safe to say that these parents were utterly defeated by the end.

Scroll below to take a look for yourself.

#1 Another option could be making a single slice ‘sandwich’.

#2 My only question is what were they trying to accomplish?

I think they tried to write a one but this is just way too weird looking.

#3 We can only hope that the parents made a video.

The kid is going to be sorely disappointed if he doesn’t get a picture or a video.

#4 What is even happening in this picture?

Well, you see this woman was trying to make a grilled cheese but she forgot the cheese.

#5 The dad was not expecting that at all.

#6 If you squint really hard, you can kind of make out a tree shape.

#7 If it doesn’t work the first time, keep adding more.

I can’t say that I haven’t put facewash in my hair before by mistake.

#8 This is certainly one way to distract your kid.

#9 Now, we just need to find a Billy who has the same birthday.

#10 It is better to wish early than never wish them well at all.

#11 So, that is where all the socks go after the washing machine. 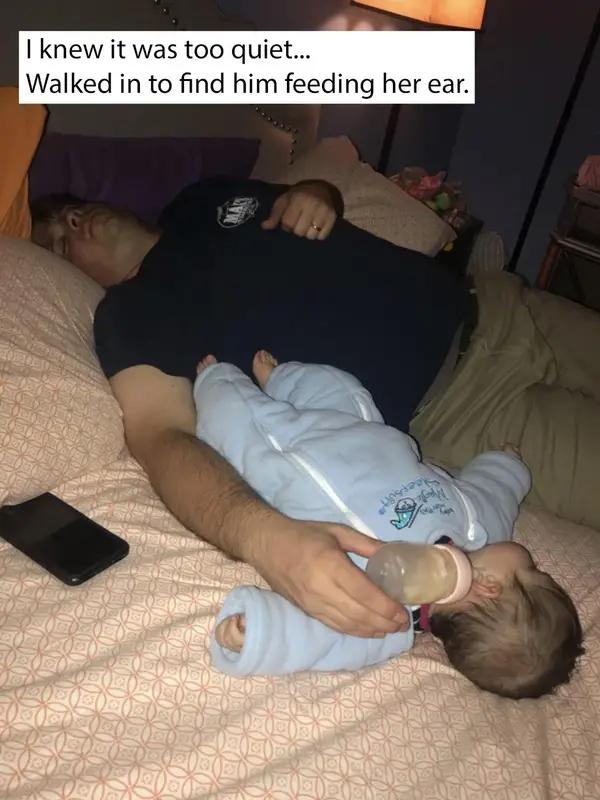 By the looks of it, he has been utterly defeated by his child and just needs a nap.

Anyone can make this mistake but the big thing is that she actually vaccinates so there is that.

#14 This is why multitasking while holding a baby is not recommended.

After all, you do not want to flip the baby by mistake.

#15 Sometimes you have to make do with what you have.

#16 They still look edible to me but I don’t have really high standards when it comes to food.

How did they manage to get all the ridges in there without it being intentional?

Have you ever showered your baby with lotion and only realized after you took notice as to how slippery your kids were? Or has this kind of thing ever happened to you thanks to your parents? Let us know in the comments down below. And don’t forget to share these embarrassing stories with your friends so they can have a laugh as well.