Landlords aren’t the most popular folk around.

We have all heard terrible stories about landlords and how they treat their tenants. Most of these stories paint landlords in a very and way and while I can’t say I’ve had a lot of great landlords in the past myself, I’ve also had the pleasure of dealing with landlords who are incredibly kind and generous. So at the end of the day, it just depends on the person and being a landlord doesn’t automatically make you a bad person no matter how much some people may believe that.

However, this is not one of those stories where everything is cut and dry and we can hate on one party because this is actually a bit more nuanced that that. Even the law isn’t particularly clear when it comes to this scenario and that is not even mentioning the different opinions people have on this. A landlord sort of moved in with her tenant who is a single mother because she refuses to move out or pay the rent at all.

Now, this sounds like the tenant is in the wrong here but there is also a reason behind why she is doing this in the first place. You can read the whole story by scrolling below.

This story is from the landlord’s side so we get to know that he had warned her about the eventual renovation. 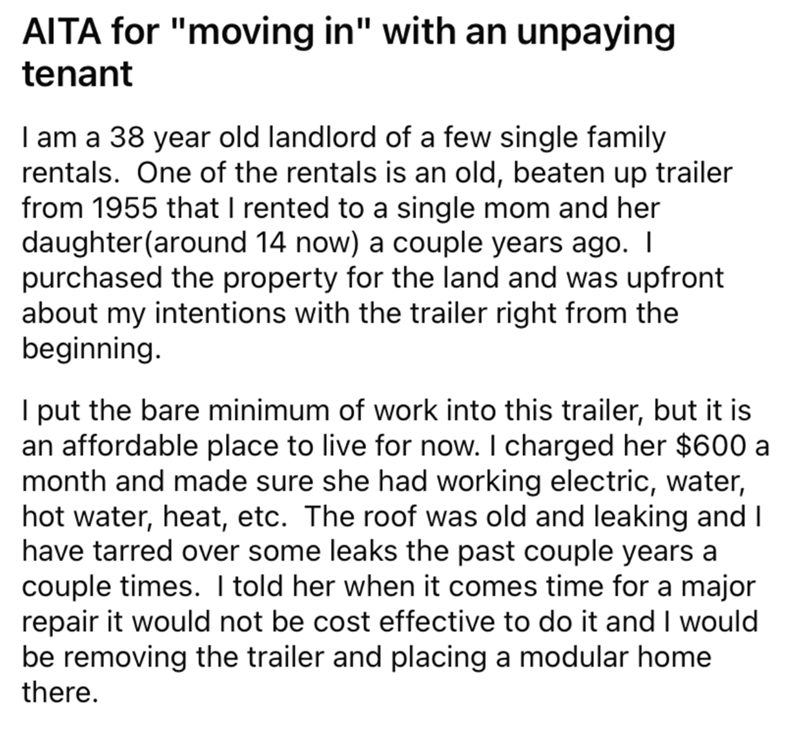 Now, the place is clearly non-habitable but she refuses to leave or pay the rent. 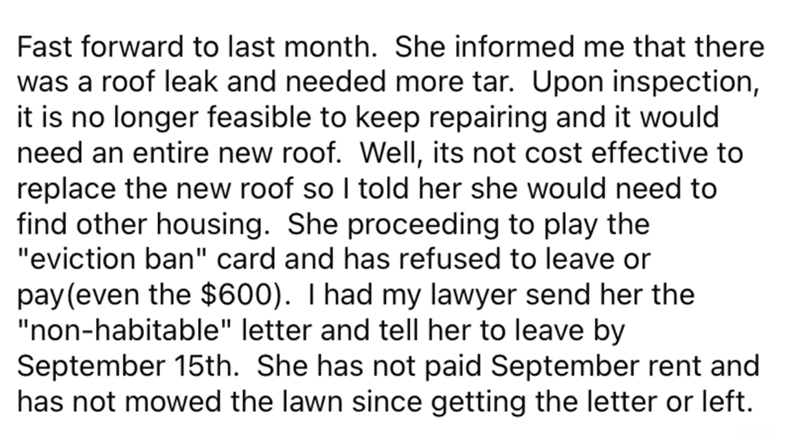 So he decided to basically just start living in the trailer as if it was his which it is. 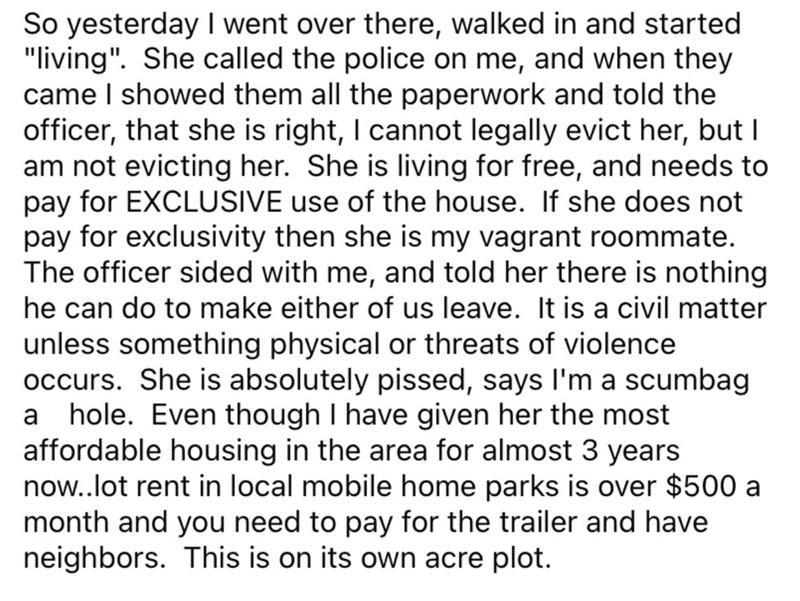 Now, he thinks that he is absolutely in the right here but he still asked people for their opinion on Reddit which never goes well for landlords. 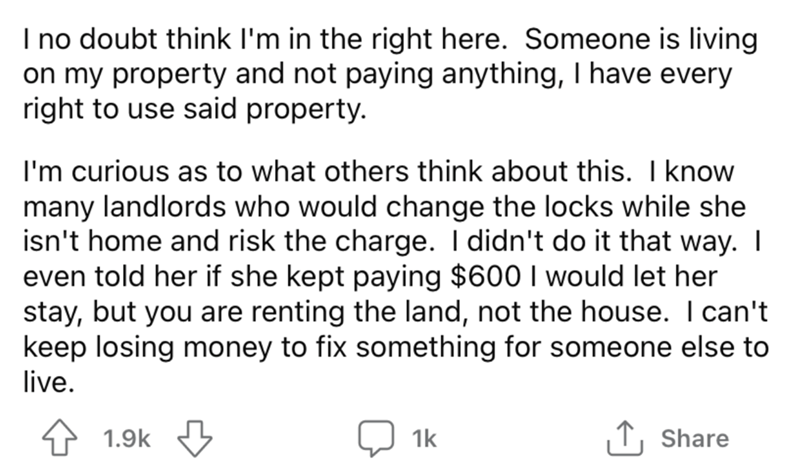 This comment called out everyone and made it clear that no one is blameless in this instance.

While they were people who supported him on his decision. 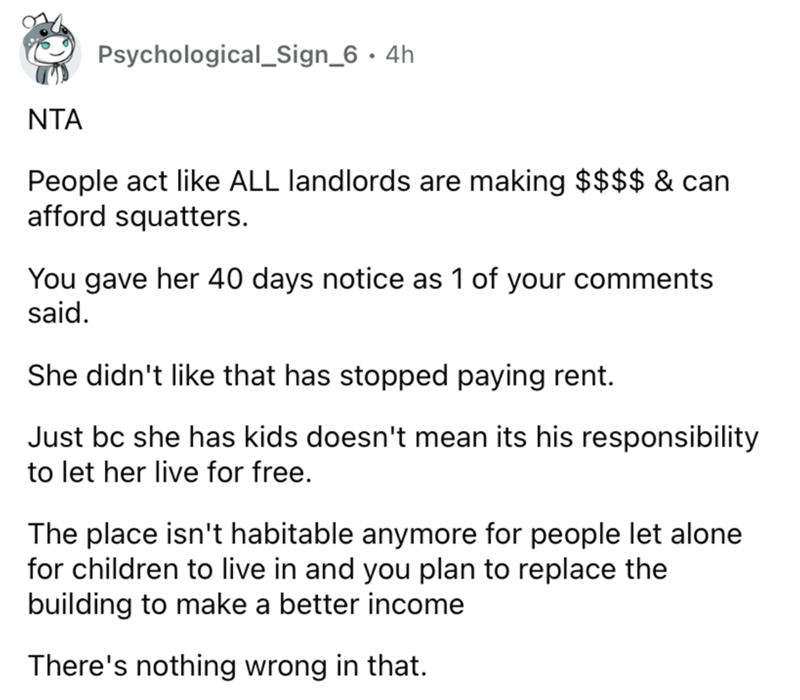 My mind was sort of made-up at the start and I was all about the landlord in this particular story. After all, he had warned her about everything beforehand and he was supposedly giving her leeway when it came to renting. However, after reading a bit more comments, I understand that not all is what it seems like. While I still can’t make up my mind as to who is in the right here, all I can say is that both of them could have handled this better.

There were a lot more who called him out for being a slum lord. 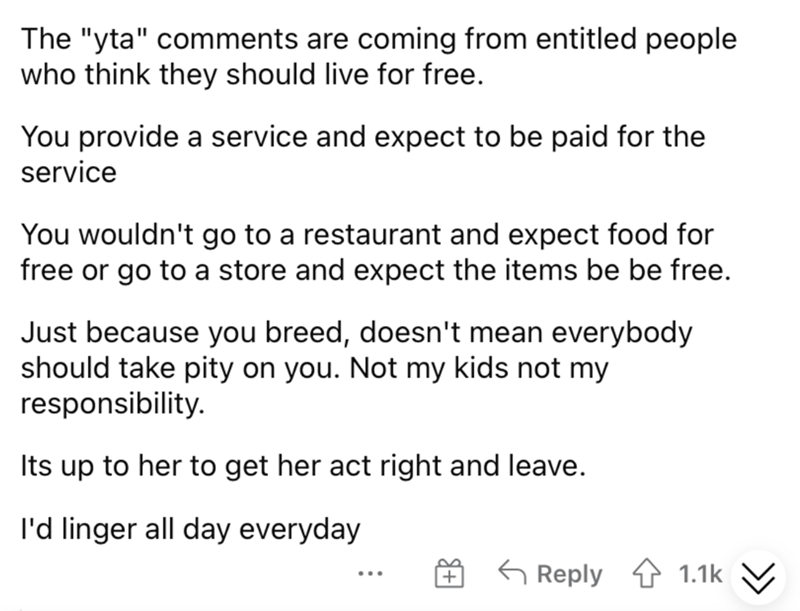 He has legal responsibilities that he isn’t fulfilling according to this person here.

And apparently, he is also breaking a bunch of laws. 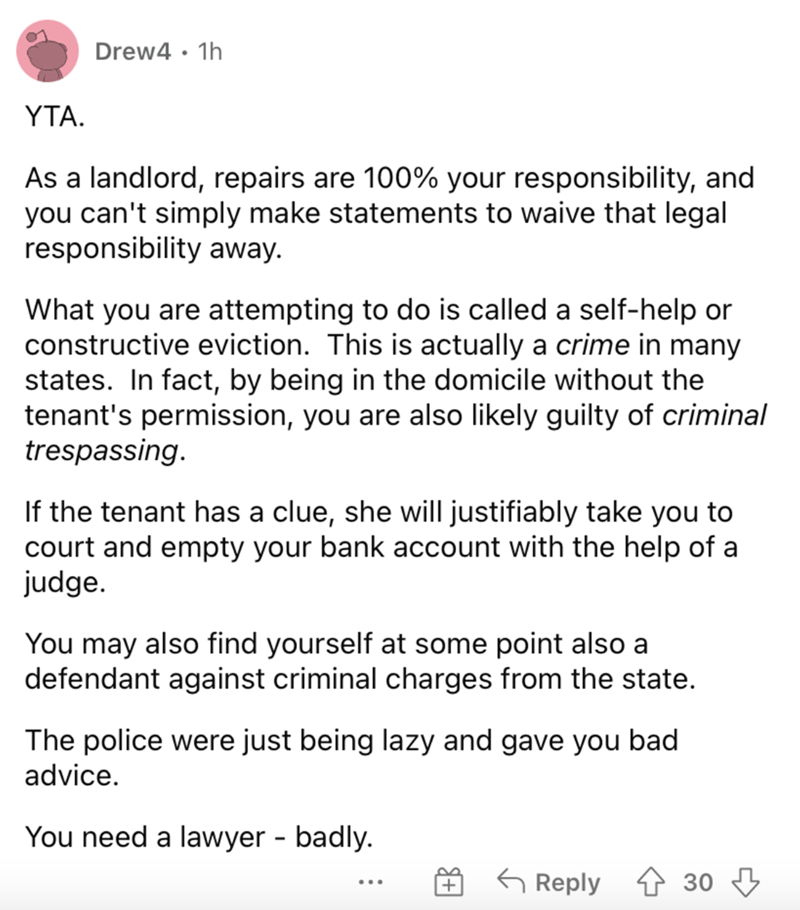 It was basically inhabitable at the end of the day. 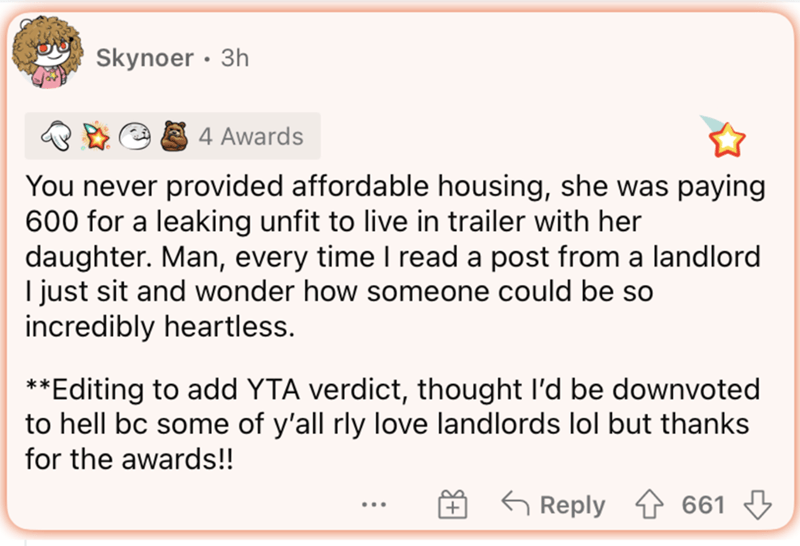 She basically didn’t have a lot of options so she ended up there. 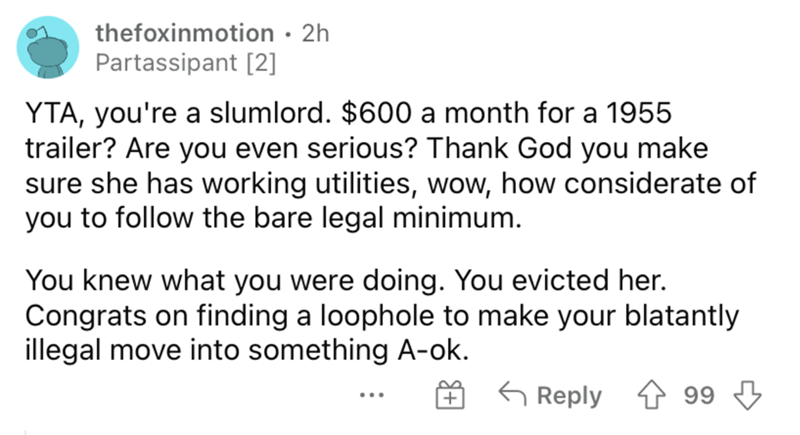 Apparently, the woman can file charges against him. 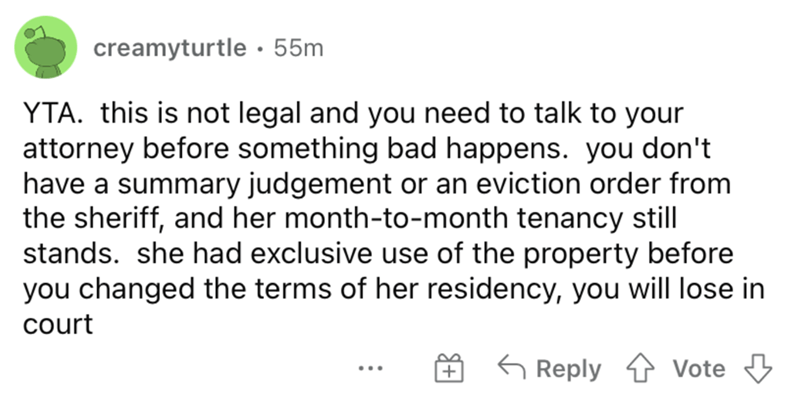 It is his decision at the end of the day.

This comment has a great point and one that I can’t deny. 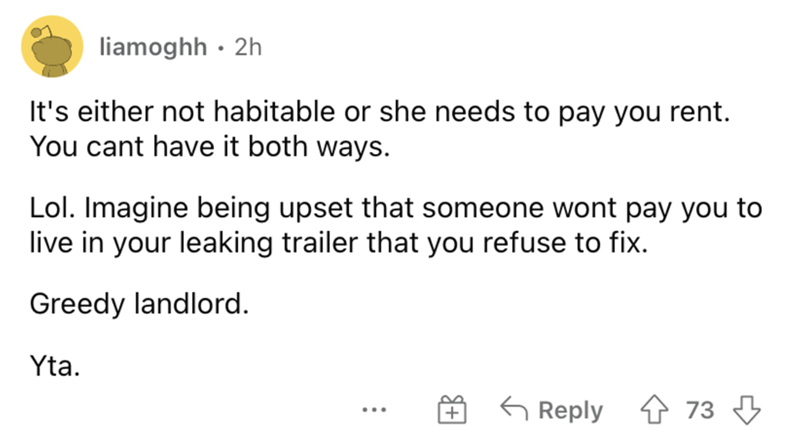 He basically wanted to put off the renovation and get some income in.

There were also some people who started hating on landlords. 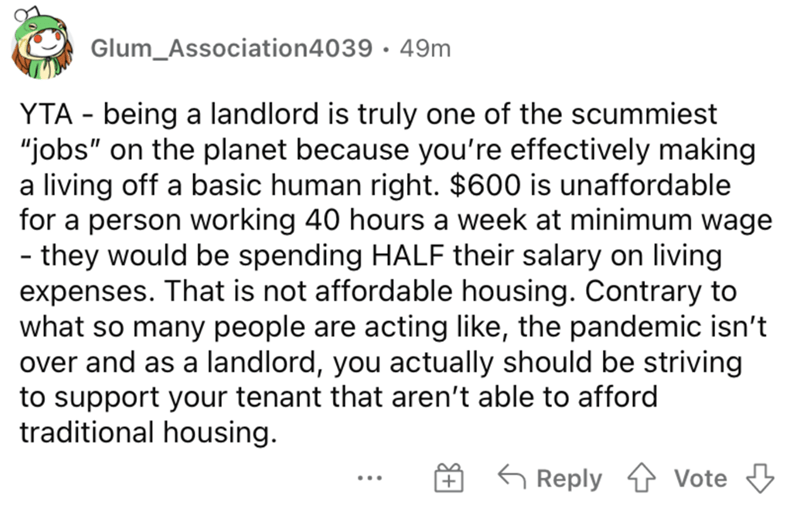 He hasn’t replied to any of the comments but I don’t see why he would.

What are your thoughts on this scenario? Do you think the landlord is in the right for doing this since his tenant stopped paying? Or do you think she had a justified reason for overstaying her welcome and that he has a responsibility to provide her with safe housing? Comment down below to let us know your thoughts. And please do share this story with your friends so they can join in the discussion as well.