Everything has a purpose.

Especially when it comes to nature. The tree that looks like it is rotting from the inside may have several animals calling it home. A bush that doesn’t seem necessary might be crucial for the animal kingdom. And while not everyone is a big fan of the overgrown look, people get to have a say in what they want to do in their own homes. So it is understandable that this guy didn’t want to remove several centuries-old trees just so his neighbor could get a better view of the water.

The trees and bushes were on his own property and he goes on o say how he loves taking photographs of animals in their natural habitat. However, his neighbor was less than thrilled when he heard this and kept hounding him about removing everything and just keeping the grass.

You can read the whole interaction by scrolling below and taking a look for yourself.

He first gives a little bit of information on what type of trees is around his house. 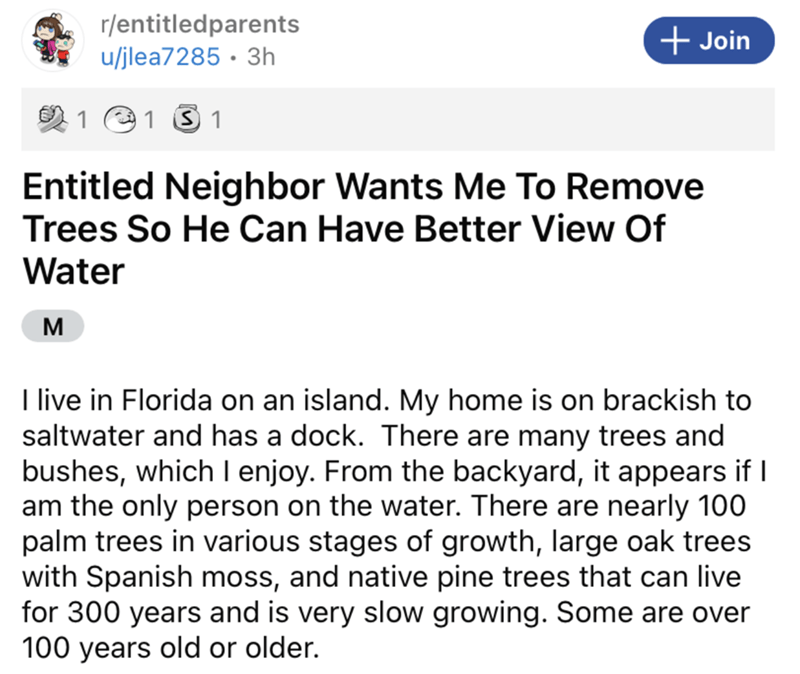 The neighbor seemed nice enough at first until he insisted on removing the trees just so he could get a better view. 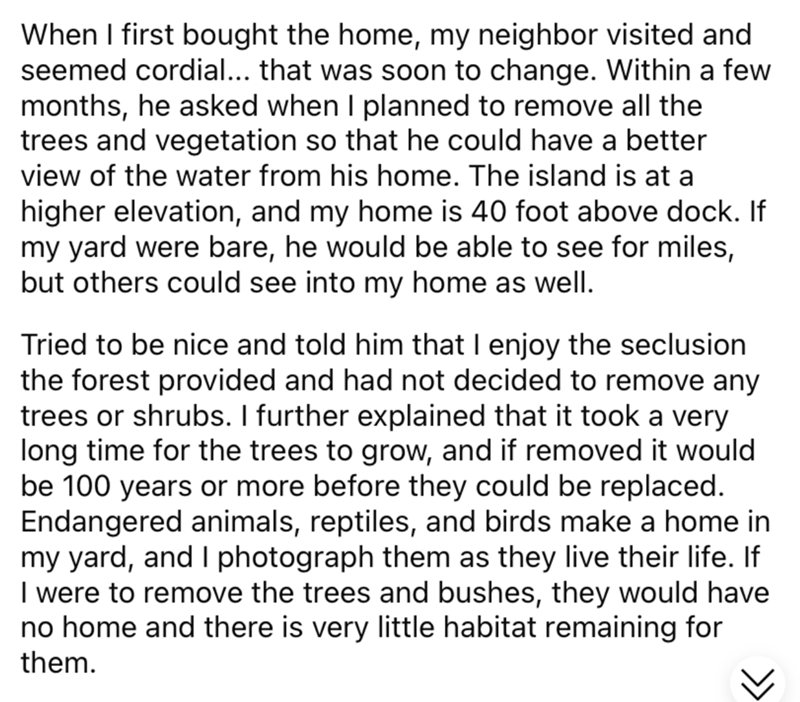 And he apparently couldn’t take no for an answer and kept pushing him to listen.

Everything has a purpose and he would like it to remain that way but the neighbor doesn’t want that.

Even after 15 years, nothing has changed about his attitude and he still goes on about the same thing. 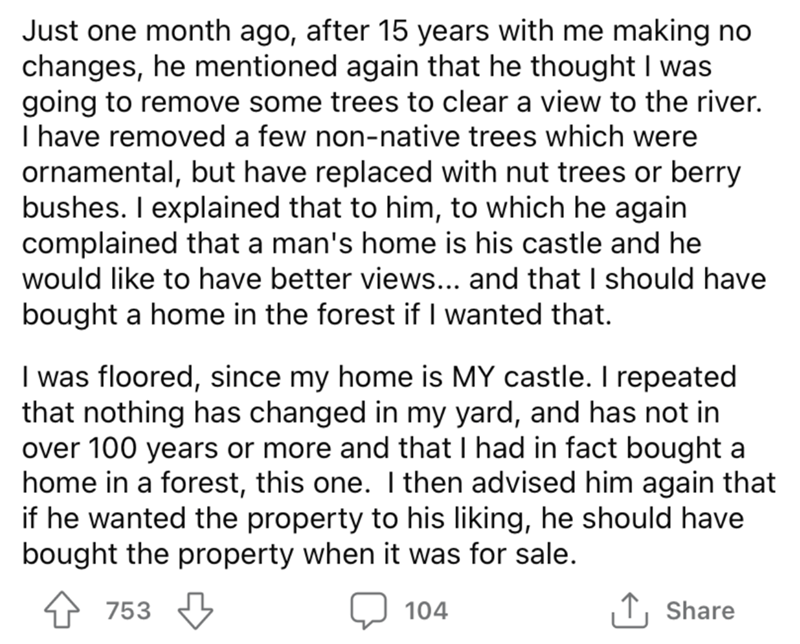 While we don’t have a lush property, we do have a large avocado tree in our backyard that we love. One of our neighbors complained about the tree dropping avocados in his yard. Sorry, fruit trees do that. If you don’t like it, you are legally entitled to remove any branches that extend over the fence/property line. No more.

But that will cost me money, why don’t you have it done when you have the tree trimmed. Because we pay extra to have an arborist-owned company do the work and he only trims what is needed to keep the tree under control and healthy. –night-otter

People were quick to give him advice on what he should do next.

We shouldn’t put past him to employ this sort of method to get what he wants.

The Reddit user is also aware that there are many endangered species also calling the little forest a home. 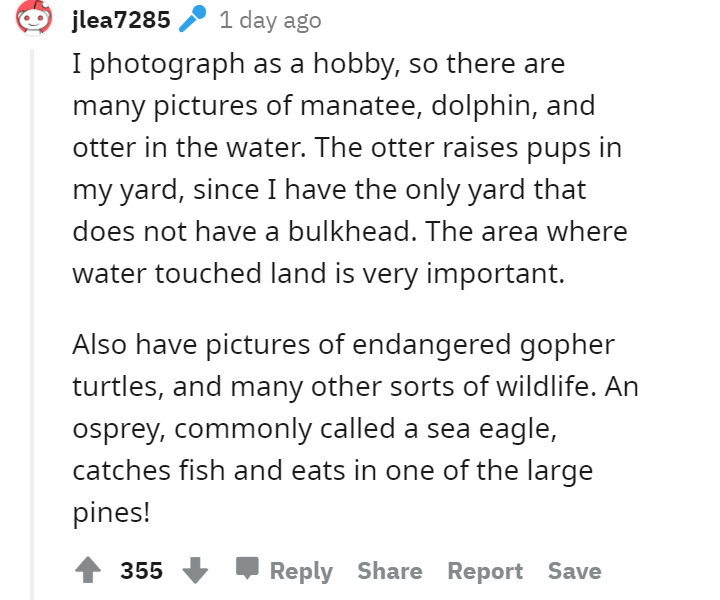 Most people would be quite happy to have such a neighbor but not him.

Even government would call some protected species. 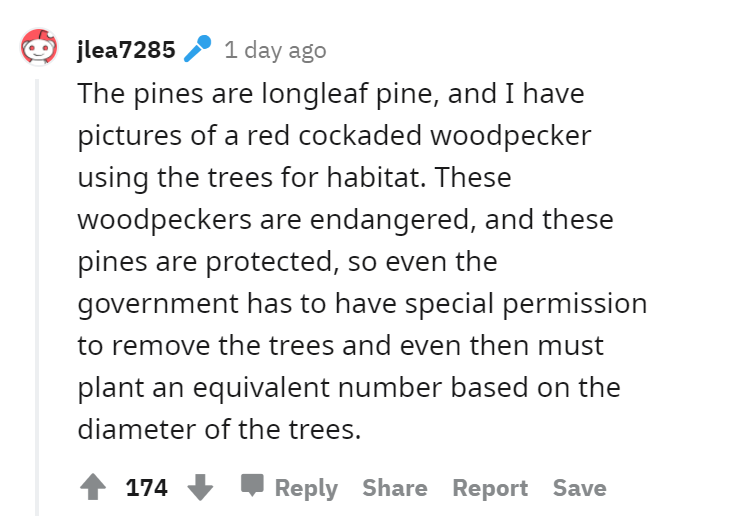 This commenter wanted the neighbor to have even more inconvenienced.

It is quite clear that he isn’t going to let it go. 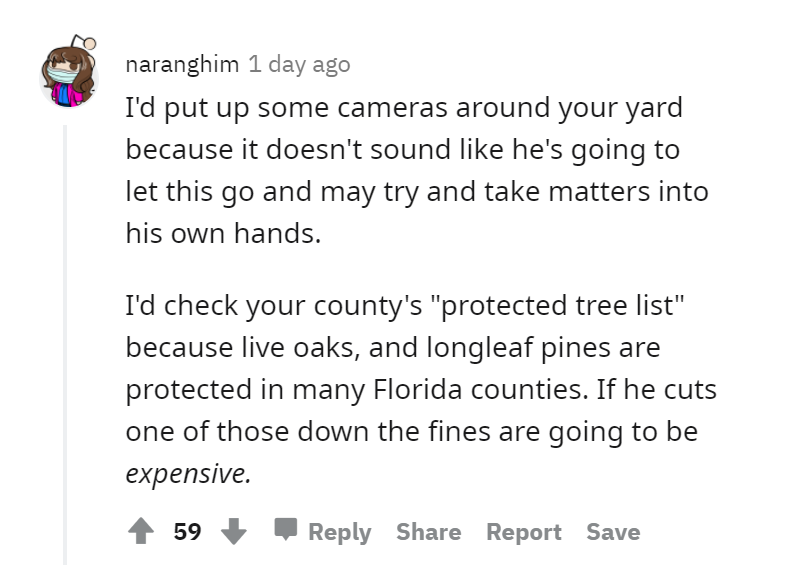 Also assuming you live in an area where people have money (if you’re on the water) and it floors me the sense of entitlement upper middle-class people have here. We came from a working-class area in the Midwest to a town on the space coast where EVERYONE is an engineer or married to one and they do not like to be told no. I miss my working-class neighbors with the cars up on blocks in the driveway. They didn’t give a shit what we did with our trees. –TheMildOnes34

And he shouldn’t even be able to demand such a thing. 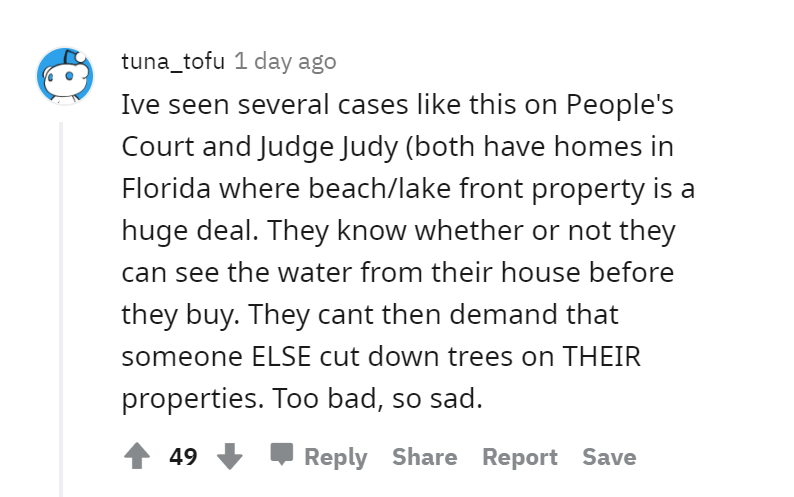 He should be able to enjoy his own paradise but entitled people are everywhere.

What do you think he should do? Should he keep a close eye on his neighbor or find out whether some trees are protected by the government? Comment down below and let us know.