We all want to be unique in one way or another.

When you give birth to a child, you should know that there is no one on Earth that could be exactly the same as them. Not even their twin sibling. Your child is already unique because of their DNA. But we completely understand that some people want their children to stand out from the rest. It starts early when the parents begin to decide on a name for their child. Nobody wants a very common name that just dies out in the crowd. I would not want to wait 9 months for a child to be born just to name it John or Brittany. Now, that would just be sad. I am sure even the child would curse me as they grew up for naming them something every other kid is named. Having a unique name is a cool thing, but some people just take it too far. This is why we can not have nice things. People just do not know when to stop.

Some people change the spellings of a common name. And some people just make up a name entirely and it just sounds ridiculous. I will always be a “you do you, boo” person but even I have to raise my eyebrows at some names I hear these days. Uniqueness is one thing, but you have to draw the line somewhere. Do not make a fool of your child just to make them “different.” Yes, your child might get attention but not in a positive way.

Utah mom, Allison Czarnecki, could not sleep one night and decided to share with everyone on Twitter the weirdest and most ridiculous names in her child’s yearbook. If you can pronounce at least 10 of these, I would give you a medal myself. Scroll down below to read her series of tweets.

And here she goes.

Some of these names are common but the rest of them…

A billion names to name your child and you came up with these?

She mentioned her favourite one too. 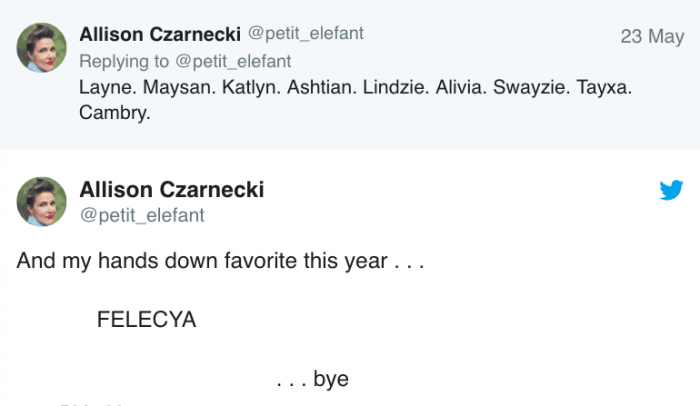 She had a little too much fun with this.

”Parriss” ain’t a bad name though.

These are just bad. 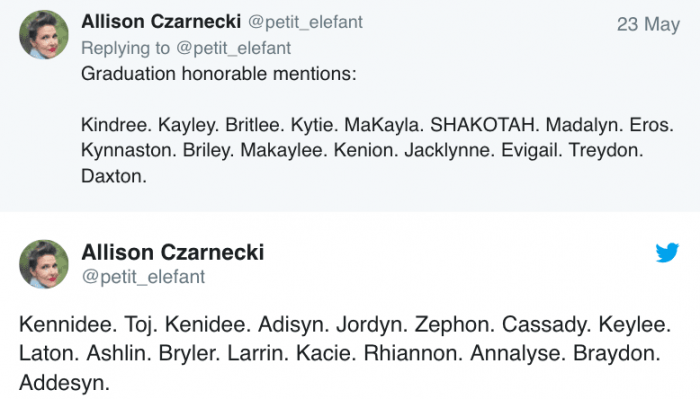 When you name your child in a second. 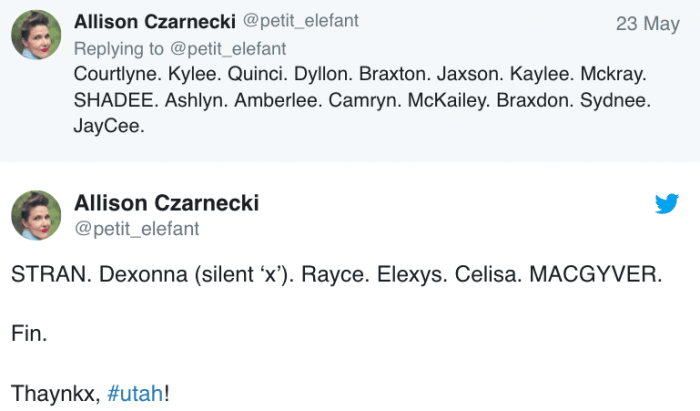 Having a foreign name is hard enough in America, but having a completely made up name? Good luck not being made a joke of in school, kid. Is this just a Utah thing or does this happen everywhere? Is it a new trend to give your children really weird and “unique” names? Am I behind the times? I do not know about you, but if this is a trend, I would rather stay old fashioned. We still are not done with the names yet. Scroll down below to read the rest of them.